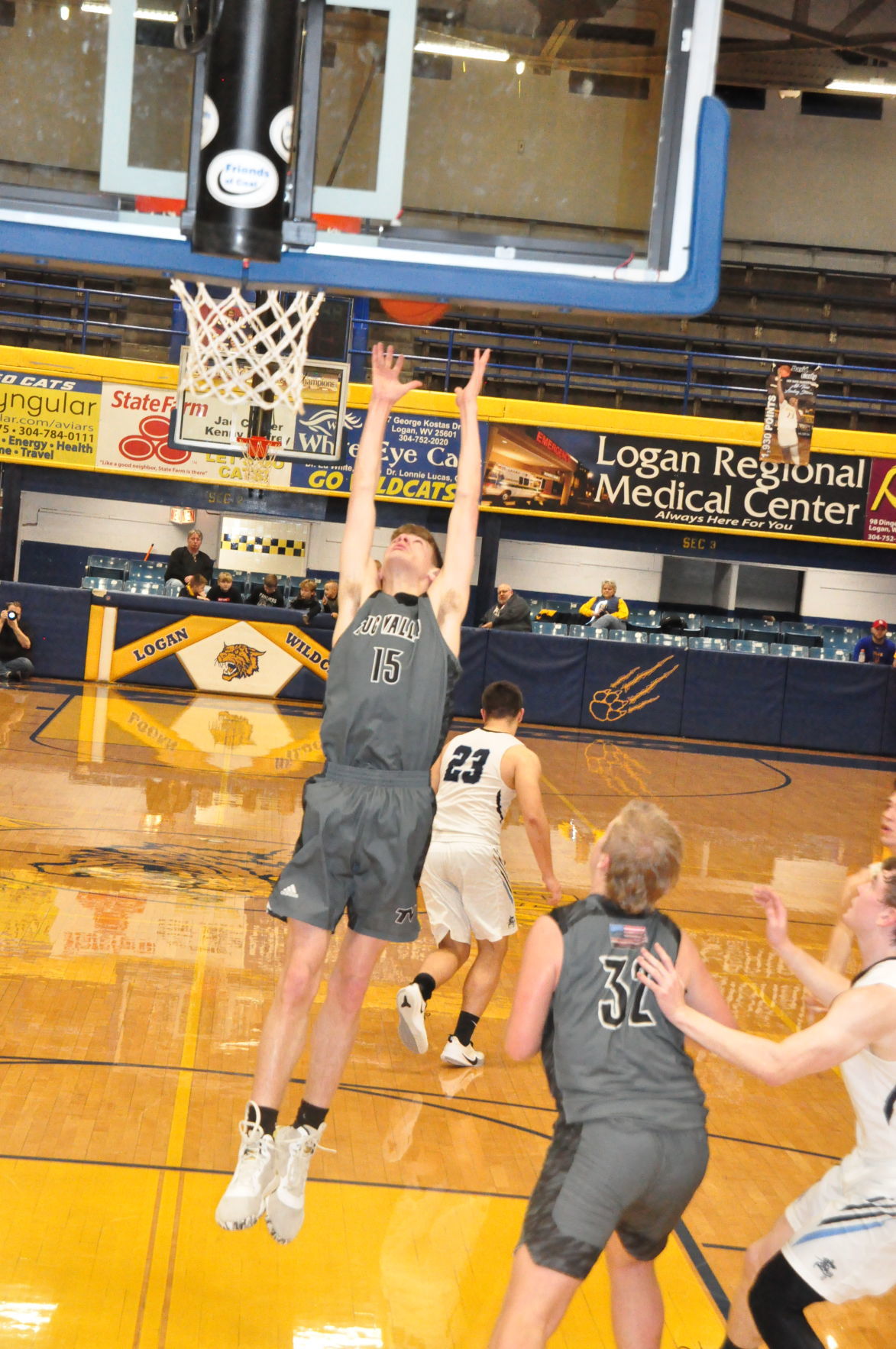 Tug Valley scored a 41-35 win over Parkersburg Catholic on Jan. 31 in the King Coal Classic at Logan. 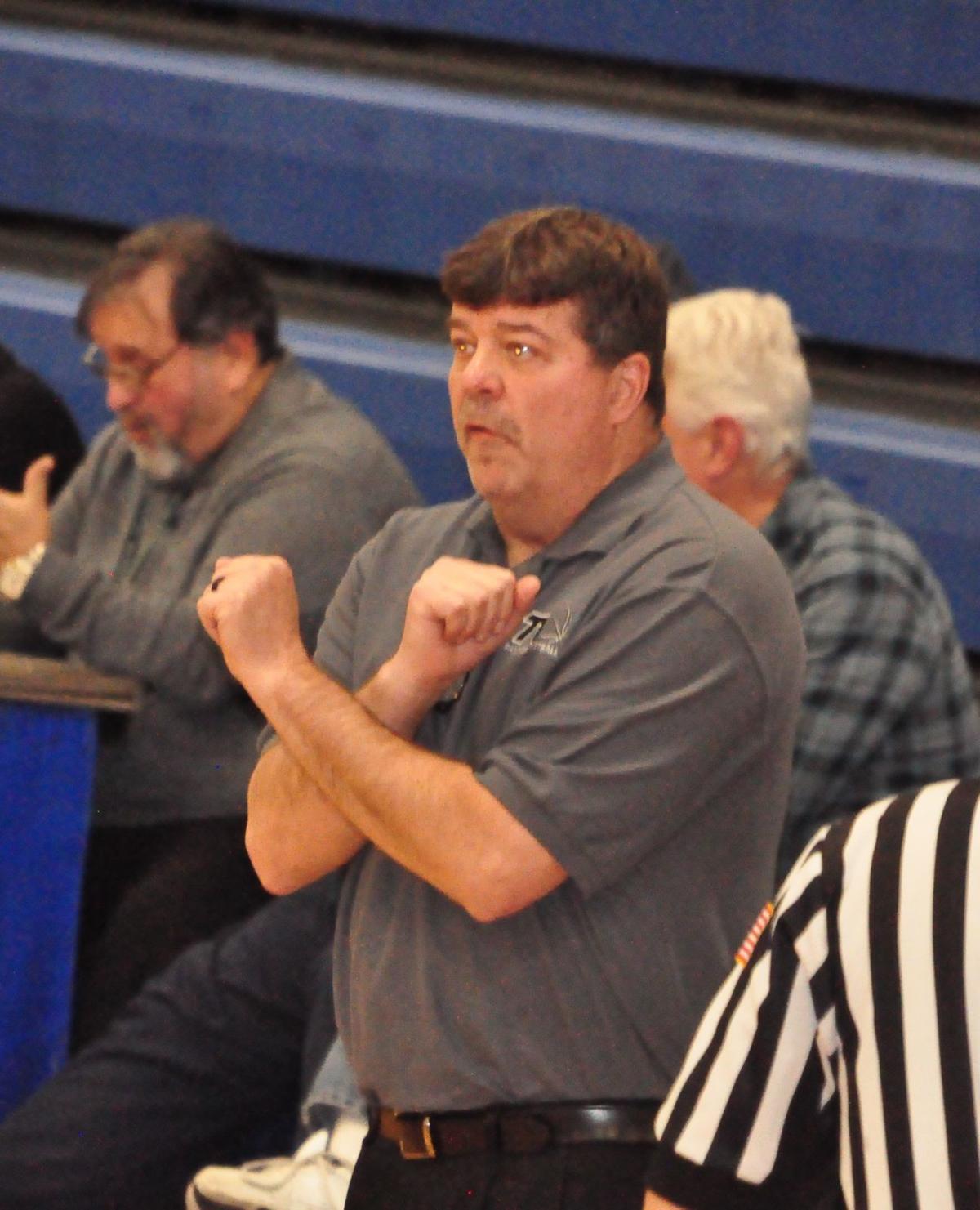 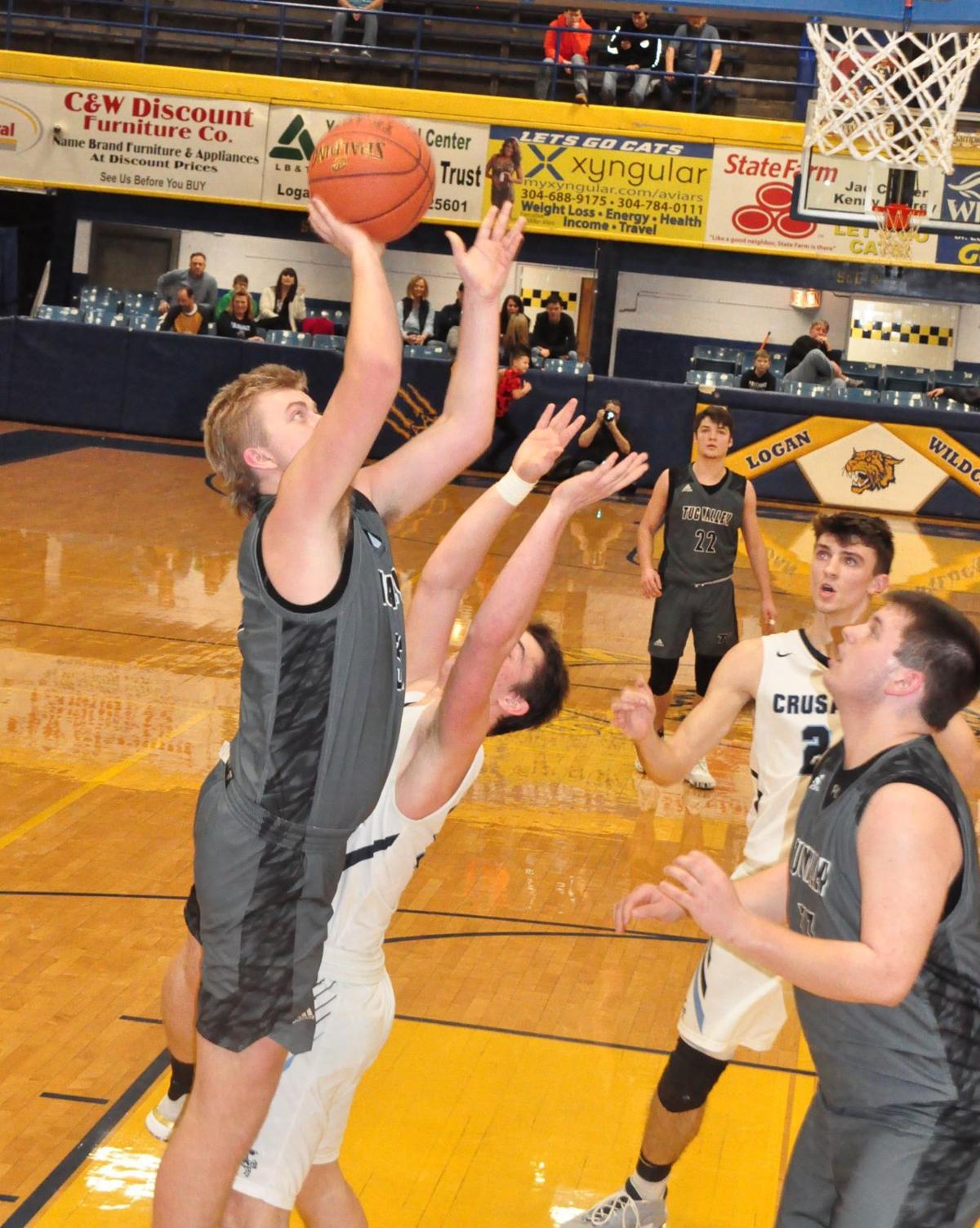 Paul Adkins/HD Media Tug Valley’s Easton Davis goes up for two in the Panthers’ 41-35 win over Parkersburg Catholic on Friday, Jan. 31, 2020 in the King Coal Classic at Logan.

Tug Valley scored a 41-35 win over Parkersburg Catholic on Jan. 31 in the King Coal Classic at Logan.

Paul Adkins/HD Media Tug Valley’s Easton Davis goes up for two in the Panthers’ 41-35 win over Parkersburg Catholic on Friday, Jan. 31, 2020 in the King Coal Classic at Logan.

GLENHAYES — In front of a raucous crowd at Rebel Arena in Glenhayes, the Tolsia Rebels downed coach Garland “Rabbit” Thompson and the Tug Valley Panthers in overtime by a score of 75-70 on Tuesday night.

Tug started the game quick going on a 7-3 run behind two buckets by junior guard Caleb May and a trey by fellow junior guard Joby Sorrell. They followed that up with leads of 11-5 and 14-7 with a jumper by junior guard Ian Reed and a free throw by sophomore Center Ethan Colegrove, respectively.

However, Tolsia would score five unanswered points to end the frame for the Rebels, reducing the Panther lead to 14-12. Sorrell lead the Black and White in scoring in the first quarter with five points, while each squad turned it over once in the period.

The hosts would go on an 8-0 run midway through the second frame behind a pair of threes by sophomore guard Jesse Muncy and guard Tyler Johnson, and a successful layup by junior forward Andrew Sturgill. Valley would go on an 8-3 advantage after that, though, which included a pair of free throws and a layup by May, giving Thompson’s team a 28-27 lead.

Muncy would cash in on a layup of his own, however, as the quarter was winding down to give the Rebels a 29-28 lead going into the intermission. May lead Tug Valley with eight tallies in the second frame, while Muncy led the Rebs scoring attack with 12 points in the period.

Todd Maynard’s squad would draw first blood in the third quarter as sophomore forward Austin Salmons made good on a layup 29 seconds into the frame. Tug would score on a basket by Davis to reduce the THS lead to 31-30, but Tolsia would then go on a 8-2 run to jump in front by eight at 39- 31, forcing a timeout by Thompson with 4:30 left in the third period in the process.

The Rebels lead by as many as nine in the quarter at 48-39, and a bucket by Panthers junior guard Ian Reed would make the score 48-41 at the end of the frame. May again lead Valley in the period with four points, while Muncy again lead Tolsia in the third by adding five tallies to the scoresheet.

Tug would fight back to tie the game behind an 11-4 run which saw Colegrove score six points and Reed hit a three-pointer with 5:09 left in regulation to tie the game at 52-52. They would then score four straight points to go in front 56-52, with a basket a piece by May and Reed.

However, the home team would take the lead back at 57-56 after two successful foul shots and a long ball by Muncy.

The Panthers would score back-to-back baskets to take a 60-57 lead, and they followed that with a 62- 59 advantage with a layup by Colegrove. With 1:21 left in regulation, though, Salmons would bank in a huge three to nod the game up at 62 all.

TVHS took a timeout with 35.2 seconds left in the frame, and then May would miss a layup as the fourth quarter clock expired to send the game to overtime.

The Black and White would control the tip to begin the extra period, and with 2:55 left, Colegrove would score a bucket to put Valley in the lead at 64-62.

However, the Rebs would jump in front for good with a layup by Muncy, giving them a 67-66 lead. Tug would never lead again, and Tolsia would go on to win the contest in overtime by a final score of 75-70.

May was the leading scorer for the Panthers on the night with 20 points. Reed joined him double-figures with 17 tallies, as did Colegrove, who notched 15 points and 14 rebounds for a double-double.

Muncy lead both teams with 29 points on the evening for Tolsia.

The two teams split the season series with Tug Valley winning 79-63 back on January 3 in Naugatuck. The Panthers are now 3-1 against Region IV Section II opponents.

Tug Valley improved to 6-9 on the season, while Parkersburg Catholic dropped to 8-4.

Easton Davis pumped in 13 points for the Panthers in the low-scoring game. Caleb May and Ethan Colegrove also broke into double digits in scoring as each tallied 12 points. May also sank a pair of 3-pointers on the night.

Patrick Copen led the Crusaders with 15 points. Jeb Boice had 12.

Parkersburg Catholic led 11-8 after the first quarter and 24-20 at halftime before Tug Valley was able to hold the Crusaders scoreless in the third while scoring 10 points to grab a 30-24 lead heading into the final eight minutes of play. Both teams netted 11 points in the fourth period.

Parkersburg Catholic was able to cut the Panthers’ lead to one point with 2:03 left as Xavier Collie scored on a putback.

Tug Valley’s May with answered with a drive down the lane with 1:40 left, pushing the lead to 35-32.

Colegrove then was fouled and also split from the free throw line with 53.9 ticks to go as the Panthers led 37-32.

Colegrove then split two free throws again with 43.2 seconds left as Tug Valley inched ahead at 38-32.

Parkersburg Catholic hit a 3 with 13 seconds to go, cutting Tug’s lead to only 38-35 and getting to within striking distance.

But then Tug Valley was able to ice the game with 9.9 ticks remaining as May was fouled, connecting on his first charity toss, putting the Panthers on top 39-35. He missed the second free throw but Colegrove was able to share the rebound and get the putback for the three-point play as Tug Valley closed it out with a six-point win.

GREATER BECKLEY CHRISTIAN 74, TUG VALLEY 63 (Feb. 1): The Tug Valley Panthers played their second game against a Top 5 team in as many nights on Saturday as they made the long trek to Raleigh County to play Greater Beckley Christian.

The Panthers could not pull of their second upset in as many nights however as the home standing Crusades held on for the 74-63 win.

Greater Beckley built a 21-14 lead after the first eight minutes of play and extended that lead to eight at 35-27 going into the halftime locker rooms.

Coming out of the break, the Crusaders put the game away as they outscored the Panthers 18-12 in the third quarter to take a 53-39 lead into the fourth where they would cruise to the 11 point victory.

Caleb May led the silver-and-black with 18 points while Ethan Colegrove followed him with 14 points and eight rebounds. Sophomore Zach Savage also reached double-figures off the bench finishing with 10 points.

Matt Linville added eight points off the bench while Ian Reed followed with five and Easton Davis and Justin Hall rounded out the scoring with four each.

Isaiah Hairston led GBC with a game high 28 points while Thad Jordan followed with 13 and Elijah Edwards finished with 12.

Tug Valley sees their record move to 6-10 on the season and they were back in action on the road last night in the second installment of the “Battle for Bloody Mingo” against Mingo Central. Scores and stats from that game were not available by press time.

The Pathers will then play a massive game at home on Friday as they welcome undefeated and No. 1 ranked Williamstown to Naugatuck. The Yellowjackets are the only undefeated team left in Class A as they sit at 16-0 on the season, with all of their wins coming by double-figures. Tip-off is set for 7 p.m. in the TVHS Gymnasium.