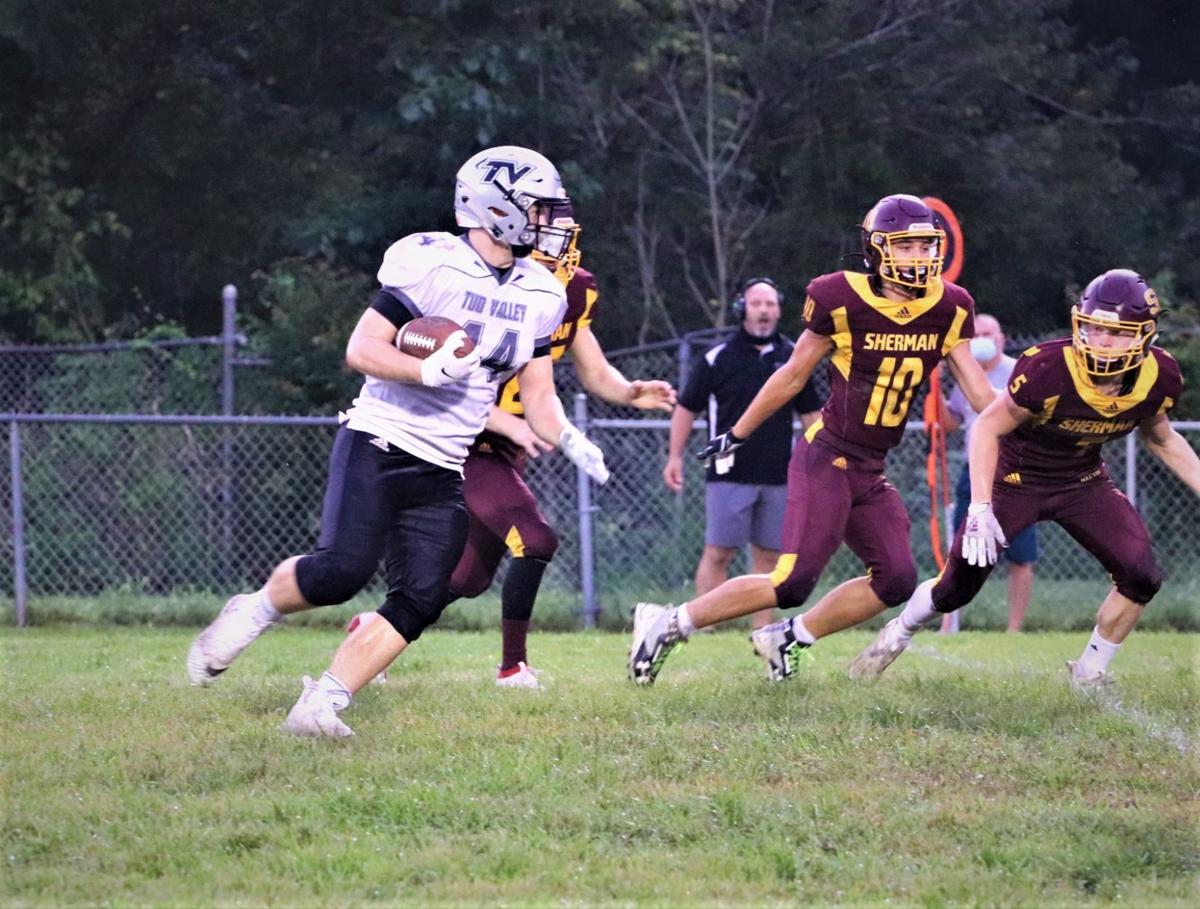 Tug Valley’s Ethan Colegrove runs with the ball during the Panthers 22-20 win over Sherman on Friday in Seth, West Virginia. 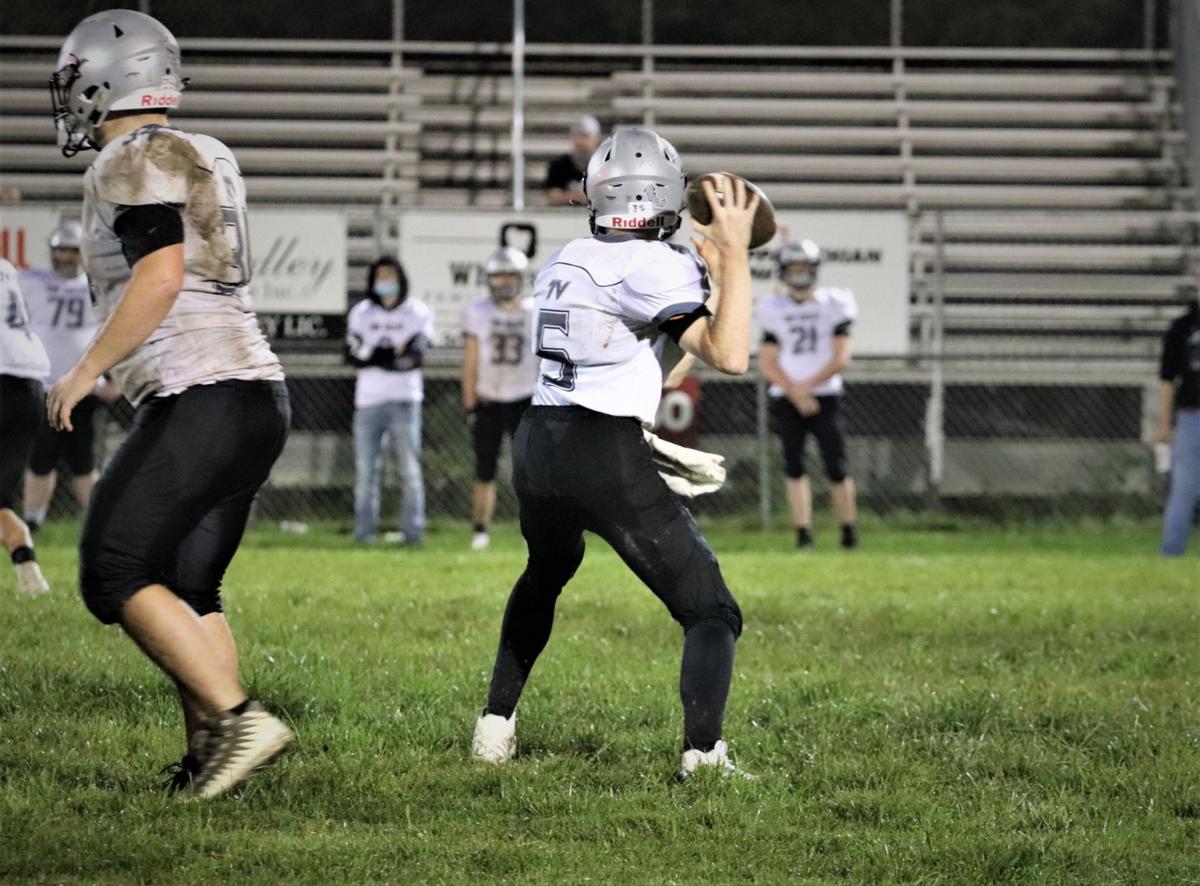 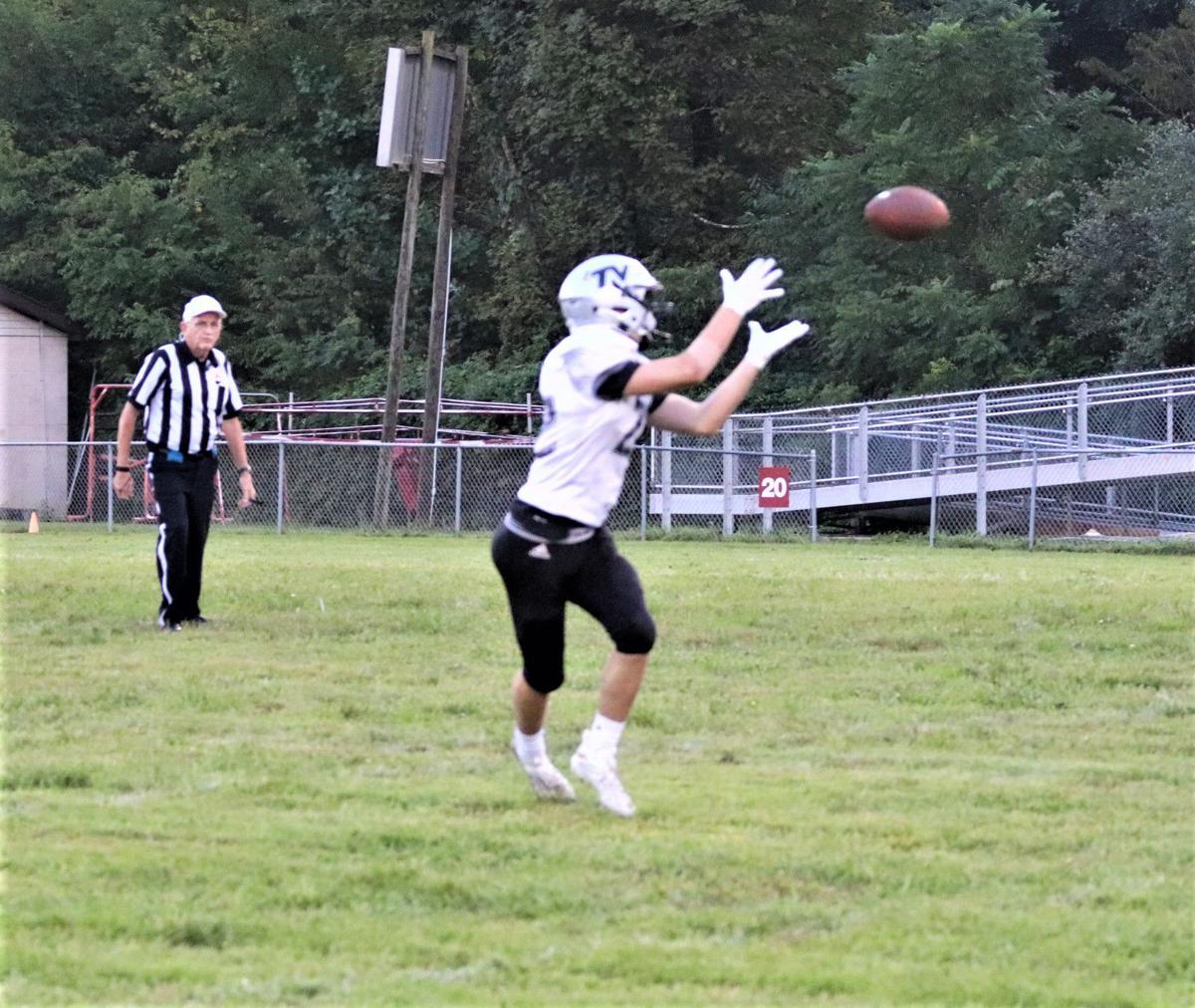 Tug Valley’s Caleb May makes a catch during the Panthers 22-20 win over Sherman on Friday in Seth, West Virginia.

Tug Valley’s Ethan Colegrove runs with the ball during the Panthers 22-20 win over Sherman on Friday in Seth, West Virginia.

Tug Valley’s Caleb May makes a catch during the Panthers 22-20 win over Sherman on Friday in Seth, West Virginia.

SETH — The Tug Valley Panthers picked up a late score to come from behind in their season opening game on Friday night and defeat the home standing Sherman Tide 22-20 on a rain-soaked Zontini Field.

Zack Savage hit paydirt from 16-yards out for Tug Valley(1-0) with barely three minutes left in the game and QB Joby Sorrell completed a 2-point conversion pass to Tanner Kirk to give the Panthers the two-point lead over the Tide (0-1).

Both Savage and receiver Caleb May did most of their damage to the Tide defense in the second half.

“We were sloppy, particularly in the first half and we have four new starters on the offensive line,” said Panthers Coach Hady Ford. “We had some missed assignments and we’ve got some things to clean up. We have a sloppy field tonight and our quarterback had trouble planting and throwing.”

Coach Ford talked about the final drive that sealed the win.

“These guys sucked it up and he (May) made some tough catches in traffic when we needed it. We finally came out and drove it down their throat and I thought we were capable of doing that but when the game was on the line, we showed it. We’ve been a second half team and I want to get out of that mentality. Once we do that, we can be a really good football team.”

Sherman bent but didn’t break early after a 64-yard drive from the Panthers stalled, Sherman took over and pushed the ball up the field thanks to a 31-yard pass play from Davy Jarrell to Colby Buzzard and a dazzling run around the strong side from running back CJ Winnell.

With 2:08 left in the first, Sherman looked to be primed to score before a pair of penalties — one for unsportsmanlike conduct pushed the Tide back and eventually killed an 84-yard drive.

After a turnover by Tug Valley, Sherman threatened again when Jarrell hit Buzzard on a slant pattern good for 21 yards, setting up Winnell for a 6-yard dive for a score. Jarrell hit the extra point and Sherman led 7-0.

After another drive by Tug Valley that saw Savage feast on tough interior running, TJ Hager picked off a pass in the red zone to kill a threat by Tug Valley.

On the next play, Jarrell hit Hager for an 86-yard scoring strike and after Jarrell’s extra point, Sherman led 14-0.

Tug Valley found the end zone in the first half but not with their offense. With Sherman operating from inside their own 25 yard-line, May stripped a Sherman ball carrier and took the play 22-yards for the scoop-and-score and the Panthers were on the board and down 14-8 at the half after a successful 2-point conversion.

Buzzard took the opening kickoff in the second half to the Panther 30 but the Panthers held and took over on downs after four plays from scrimmage.

Tug Valley then put together a meticulous 61-yard drive with gains from Savage and May of 6, 12, 17 and 4. The drive was spoiled however by a Winnell interception that he returned for 35 yards to the Panther 22.

A pair of penalties pushed Sherman back and after a loss on downs, the Panthers sputtered and fumbled the snap on a punt attempt which set up a Sweep for a score from Sherman’s TJ Hager with 4:23 to go in the third frame and giving Sherman a 20-8 advantage.

A relatively quick 82-yard drive saw Savage score the first of his two touchdowns for Tug Valley on a dive play and Sherman’s lead was cut to 20-14.

With 6:09 to go, Sherman’s Hunter Bowling sacked Sorrell creating a fourth down-and-11 situation which was then converted by a pass and catch from Sorrell to May which sat the stage for the game winning score.

The Tide was hampered by four personal fouls in the game.

“We won the turnover battle but the penalties absolutely killed us,” said Sherman Coach Michael Showalter. “We had so many good plays tonight but they were overridden by the mental lapses.”

Showalter talked about Savage and May and their gritty performance.

“With guys like that you know they are going to make plays and you just hope to limit them as much as possible,” he said. “May is a senior and probably the best player on that team and he made plays when they mattered. Down the stretch he showed why he is considered one of the better receivers in Class A football.”

Sorrell finished 14-26 passing for 124 yards and two interceptions in his first career start under center. May caught three passes for 42 total yards and all three receptions good enough for a first down.

Savage toted the ball 18 total times for 67 yards and two big scores to help the Panthers overcome the double-digit deficit in the second half.

Defensively May led TVHS with 14 total tackles to go along with the pick-6 while Savage and freshman Dakota Ooten each added seven stops and Dawson Loving contributed five. Colegrove finished with three tackles and two of them coming for a loss.

Tug Valley is scheduled to host Wierton Madonna on Saturday, Sept. 12 at 4 p.m. and Sherman will travel to Richwood on Friday.