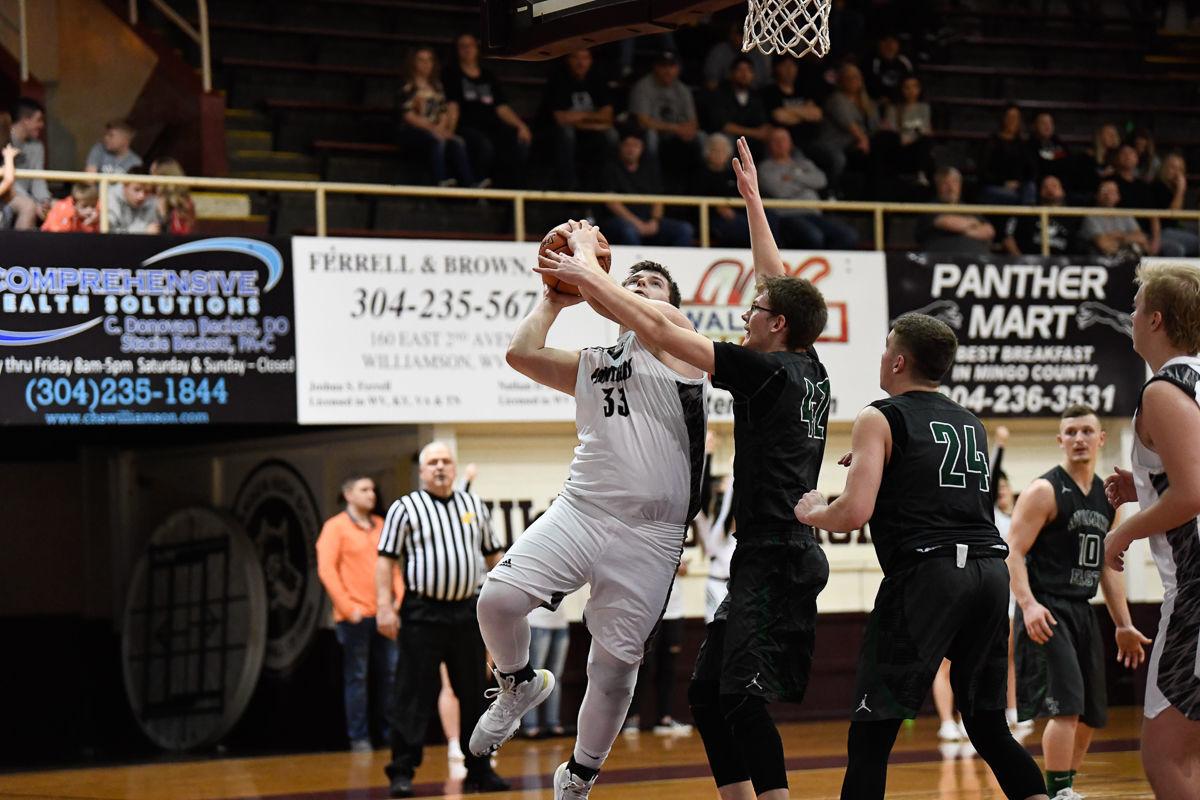 Tug Valley forward Ethan Colegrove goes up for two of his game high 23 points during the Panthers’ 69-55 win over Wyoming East in the 18th annual Hatfield-McCoy Shootout at the Williamson Fieldhouse on Friday. 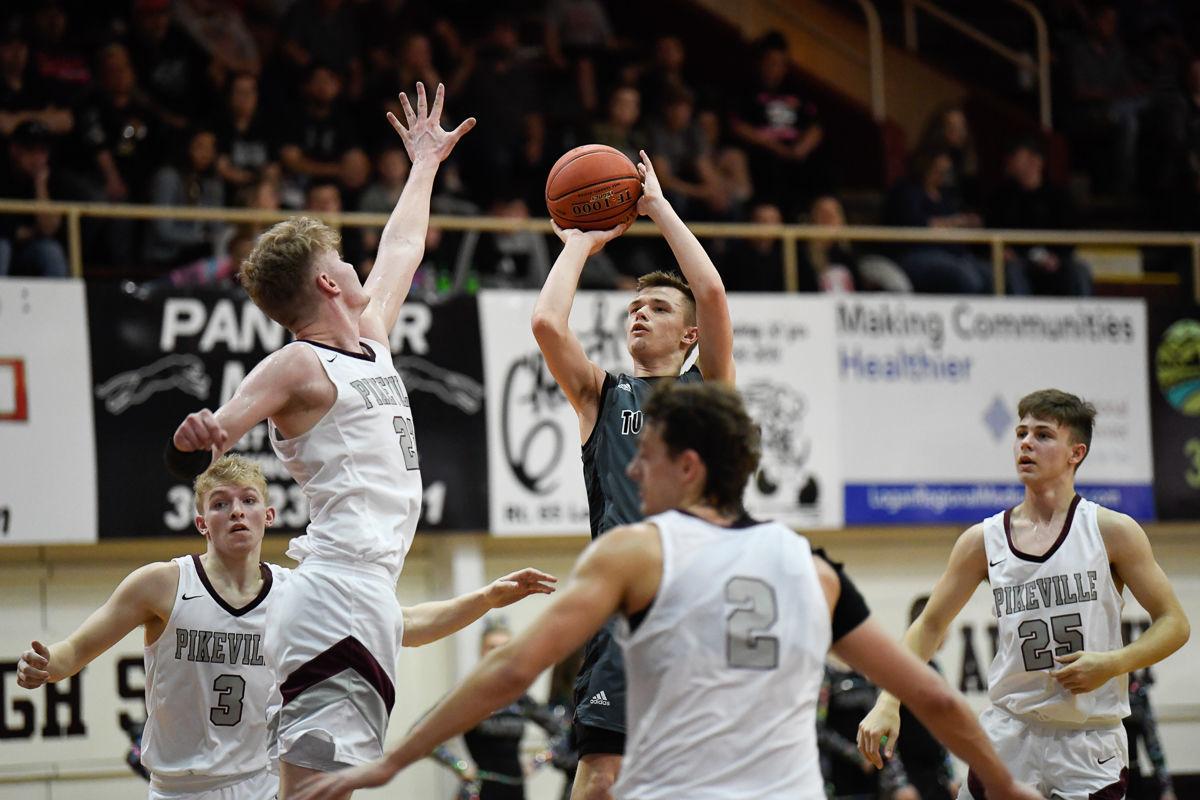 Tug Valley junior guard Ian Reed shoots a pull up jump shot over the out-stretched arm of Pikeville’s Rylee Sammons during their 53-51 loss in the 18th annual Hatfield-McCoy Shootout on Saturday at the Williamson Fieldhouse.

Tug Valley forward Ethan Colegrove goes up for two of his game high 23 points during the Panthers’ 69-55 win over Wyoming East in the 18th annual Hatfield-McCoy Shootout at the Williamson Fieldhouse on Friday.

Tug Valley junior guard Ian Reed shoots a pull up jump shot over the out-stretched arm of Pikeville’s Rylee Sammons during their 53-51 loss in the 18th annual Hatfield-McCoy Shootout on Saturday at the Williamson Fieldhouse.

WILLIAMSON — The Tug Valley Panthers picked up a win over a Class AA squad in the opening night of the 18th annual Hatfield-McCoy Shootout at the historic Williamson Fieldhouse as they cruised past Wyoming East by a final score of 69-55.

In a rematch of a few fierce state tournament match ups from years past, the two teams went back-and-forth trading buckets in the opening period and it was the Warriors who had the slim 11-9 lead going into the second frame.

In the second stanza, Tug Valley heated up offensively and outscored Wyoming East 19-13 to take a 28-24 halftime lead.

Coming out of the halftime locker room, sophomore big man Ethan Colegrove decided he was going to take over the game for the Panthers. He scored 11 points on a perfect 5-5 shooting in the quarter as he helped Tug Valley extend their lead to double-digits at 47-32 going into the fourth.

The Warriors heated up offensively in the fourth quarter but it was all for naught as coach Rabbit Thompson got eight more points from Colegrove and eight off the bench from Zack Savage as they secured the 14 point win.

Colegrove was perfect on the night for the Panthers as he finished with a game high 23 points on 11-11 shooting and yanked down seven rebounds. Point guard Caleb May followed with 15 points and five assists while Ian Reed and Savage each finished with eight points.

Easton Davis chipped in six, Joby Sorrell scored five, while Justin Hall and Matthew Linville each finished with two to round out the scoring.

The Panthers once again shot the ball extremely well from the floor hitting 30 of 50 shot attempts for a scorching 60% clip, while Wyoming East hit 21 of 59 shots for 36%.

PIKEVILLE 53, TUG VALLEY 51 (Saturday): The Panthers of Tug Valley nearly knocked out the maroon-and-white Panthers of Pikeville for the second year in a row in the 18th annual Hatfield-McCoy Shootout but fell by two as Pikeville walked away with the 53-51 win.

After the two teams were tied at eight after the first quarter of play, Pikeville took control in the second quarter outscoring Tug Valley 21-14 to take a 29-22 halftime lead.

Coming out to start the second half coach Elisha Justice’s club extended their lead to 12 at 36-24, but Tug Valley trimmed it back down to single digits as Pikeville led 44-36 going into the fourth quarter.

Pikeville still held a six-point lead at 46-40 midway through the final eight minutes of play when leading scorer Rylee Sammons fouled out of the game.

The silver-and-black Panthers made their move as they went on an 11-5 run over the next three minutes and tied the game up at 51 apiece after a pair of Ian Reed free throws with 57 seconds to play.

The next time down the court the Tug Valley defense forced a missed shot by Pikeville, but Connor Byers grabbed the missed shot and put it off the glass and in to give Pikeville the 53-51 lead.

Tug Valley’s Caleb May looked like he was going to have a chance to tie the game in the closing seconds and force overtime but he slipped in the lane and lost the ball out-of-bounds with under a second on the clock.

Tug Valley couldn’t foul before time ran off and Pikeville locked up the two point win.

Reed paced Tug Valley in scoring as he dropped in a team high 16 points, with 12 coming in the second half. Ethan Colegrove joined him in double-figures as he finished with 11 points and yanked down 16 rebounds.

Grayson Harris led Pikeville with 21 points including a perfect 4-4 shooting from deep, while Nick Robinson added 10. Sammons was held to only six points for Pikeville despite averaging 14 coming into the game.

TUG VALLEY 60, HUNTINGTON ST. JOE 57 (Jan. 7): The Panthers picked up their second win in Region IV Section II play in four days on Tuesday of last week as they went on the road and knocked off Huntington St. Joe 60-57.

The Panthers jumped ahead of the Irish in the early going as they led the home team 12-10 after the first eight minutes of play. St. Joe rallied in the second frame however to take the lead going into the halftime locker rooms at 25-24.

Coming out of the break junior guard Caleb May took over the game for the Panthers as he posted a 10 points in the third period and helped Tug Valley take back the lead at 42-40 going into the fourth.

May continued to dominate the Irish in the final eight minutes as he scored 11 more points, including hitting 7-8 from the charity stripe down the stretch as the black-and-silver held on for the three-point win. May finished with a game high 25 points, with 21 of those coming in the second half. He finished 12-14 from the foul line and also dished out five assists while grabbing five rebounds.

Junior Easton Davis was the lone Panther to join him in double-figures as he scored 10 while Ian Reed and Justin Hall each chipped in seven. Matthew Linville added four, Ethan Colegrove scored three, while Zack Savage and Joby Sorrell rounded out the scoring column with two each.

Jaylen Motley’s 17 points led the Irish while Zavion Johnson was right behind him with 16. The Irish, who are coached by former Marshall forward Ryan Taylor, were playing without leading scorer Kaden Warner.

After going 2-1 in their games this past week Tug Valley sees their season record move to 4-5. They are back in action this week with all three games coming on the road.

The Panthers were scheduled to play at Westside on Tuesday night, but scores and stats were not available by press time. They are set to play at Notre Dame on Friday at 7:30 p.m. and then at Class AA Robert C. Byrd on Saturday in a 4 p.m. tip.

Tug Valley will return home on Tuesday, Jan. 21 for the “Battle of Bloody Mingo,” as they will host in-county rival Mingo Central. That will be a boys/girls doubleheader at TVHS, with the girls game kicking things off at 5:30 p.m.