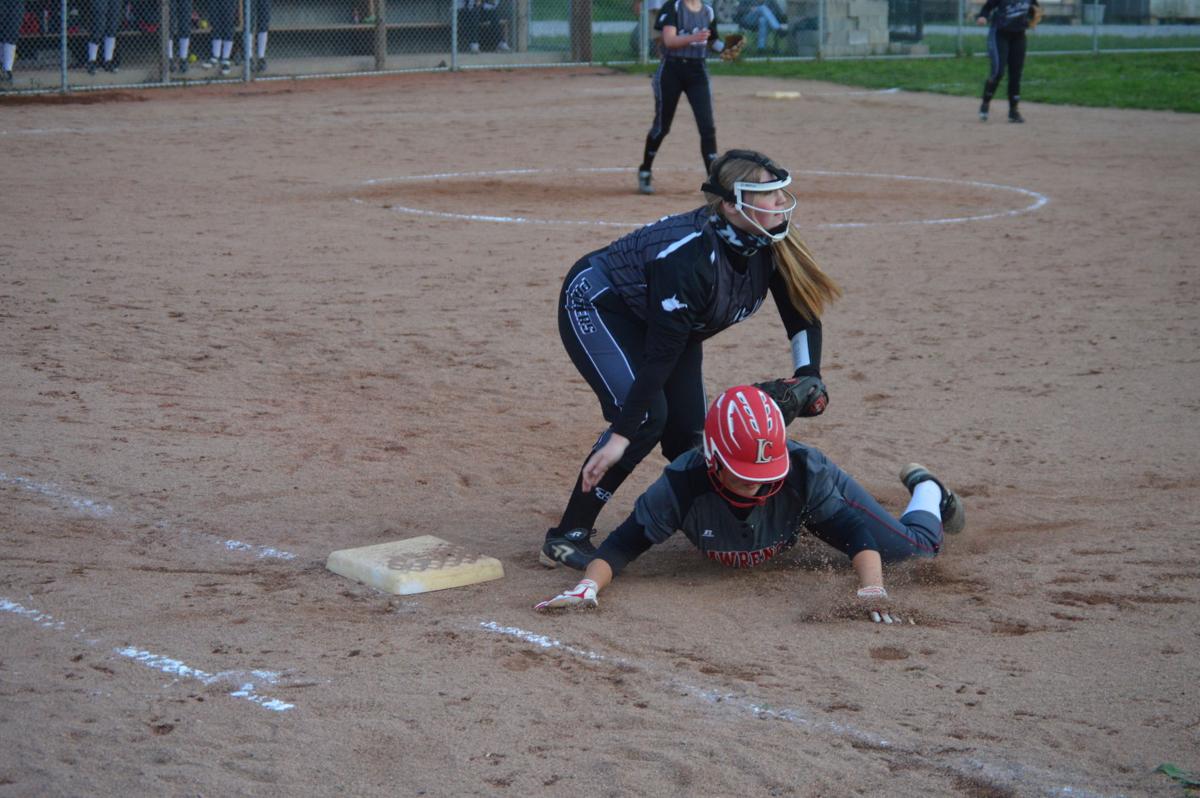 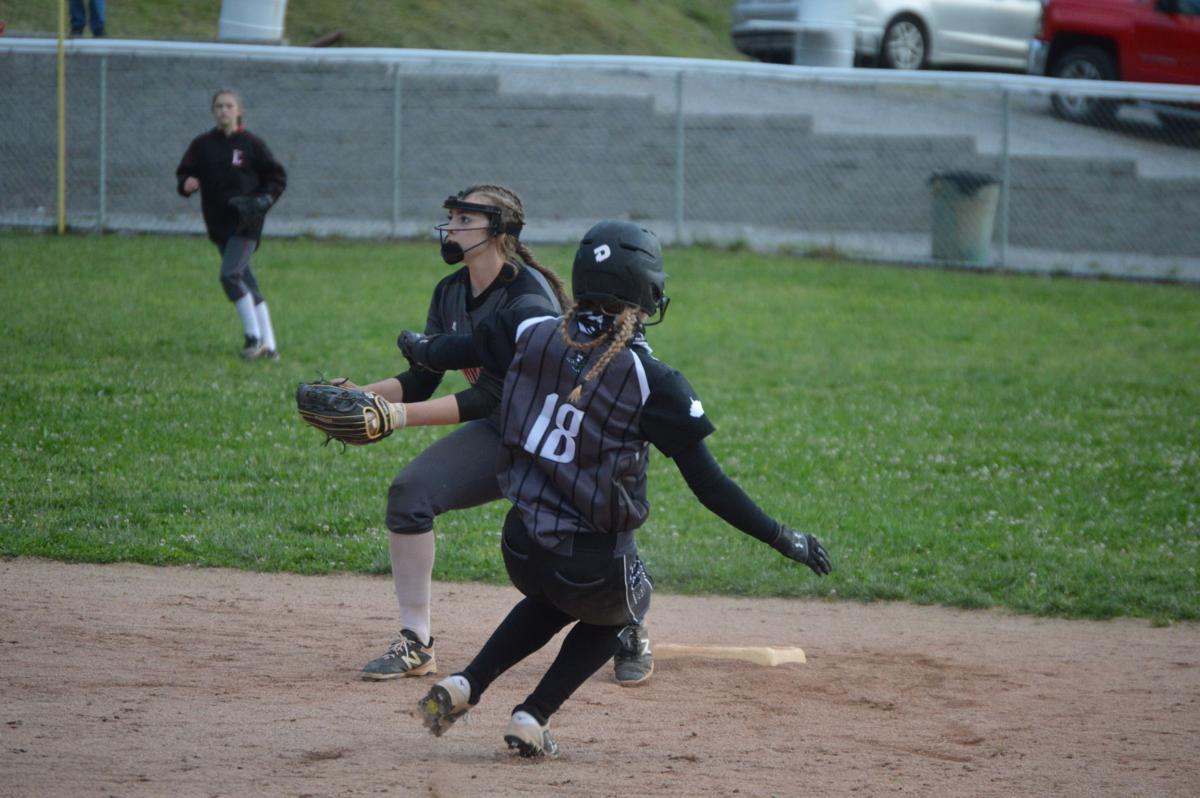 Tug Valley speedster Cassidy Griffey slides into second base while Lawrence County’s Kensley Feltner waits on the ball during the Lady Panthers 6-5 loss to the Lady Bulldogs on Friday, May 7, 2021 in Naugatuck, W.Va.

Tug Valley speedster Cassidy Griffey slides into second base while Lawrence County’s Kensley Feltner waits on the ball during the Lady Panthers 6-5 loss to the Lady Bulldogs on Friday, May 7, 2021 in Naugatuck, W.Va.

The Tug Valley Lady Panthers went 1-3 on the softball diamond this past week with all three losses coming by a deficit of just a single run.

The Lady Panthers lost to reigning Class A State Champion Sherman on Monday, May 3 by a final score of 6-5, defeated Cross Lanes Christian 9-2 on Tuesday, May 4, went down to Kentucky power Lawrence County on Friday 6-5, They then lost to Class AAA George Washington on the road on Saturday by a final tally of 5-4.

In the loss to the Lady Tide, Tug Valley led 5-3 entering the bottom of the 6th inning before Sherman got a solo home run from Lauren Guthrie and a two-run shot from Hailea Skeens to give them the 6-5 lead.

Sherman pitcher Chloe Treadway stranded the tying run on second base in the top of the 7th inning as she picked up the Tide’s second win over the Lady Panthers. Treadway went the complete game allowing five runs, four earned, on seven hits while striking out eight batters and walking two.

Kinna Justice, who filled in for ace Autumn Hall while she rests an injury suffered during basketball in the state title game, was handed the loss going six innings allowing six runs on 10 hits while striking out seven batters and walking three.

Junior Emily Hatfield continued to mash at the plate as she went 2-2 with a triple and two RBI while freshman Haleigh Muncy also had two base hits and knocked in a run.

Freshman Tailyn Russell added a pair of singles and scored a run while Kaitlyn Copley also picked up a single.

Tug Valley got back in the win column against the Lady Warriors as a five run sixth inning propelled them to a seven run win.

Hatfield slugged a two-run home run while Muncy slapped a solo-shot in the win and added a single. Cassidy Griffey also notched a pair of hits including a double to go with two RBI while Kyla Waller also ripped a two RBI double.

Copley added a RBI single while Audrey Evans laced a pinch-hit double and Amelya Wellman, Alyssa Newsome, and Justice all finished with singles.

Justice picked up the win in the circle firing seven innings of two run ball allowing only five hits while striking out seven and walking one.

Tug Valley allowed Lawrence County to score two runs in the 6th and 7th innings apiece to tie the game up at five and force extra innings on Friday night in Naugatuck.

The Lady Bulldogs (18-6) took their first lead of the game in the top of the ninth inning after Kaitlyn Meddings tripled and then came home on a RBI groundout by Shelby Blevins to make the score 6-5.

The Lady Panthers threatened in the bottom half of the inning but could not muster a rally as they left the tying run on second base to end the game.

Hatfield once again led coach Rocky Hall’s team at the plate as she went 3-5 on the night and finished just a home run shy of her first career cycle.

Mckynnly Farley and Justice each added singles while Russell scored a run.

The Lady Panthers suffered a third defeat in heartbreak fashion to end the week as the Class AAA Lady Patriots picked up a walk-off win in the bottom of the 7th inning.

With two outs and the game knotted up at five apiece, Savannah Graley came through for GW as she singled on a ground ball to left field to score Ana Jimenez and send her team home victors.

Tug Valley made a rally late in the game to tie it up as they trailed 4-1 entering the sixth inning but scored three runs to tie it up at four.

Muncy had an RBI triple in the inning while Waller had an RBI single to left and Justice was credited with a bunt single that brought in a run. Muncy also knocked in the Lady Panthers first run with a single to left in the top of the 3rd inning.

Muncy, Justice, and Copley each had two hits for TVHS while Newsome, Wellman, and Waller each had singles.

Justice was handed the loss in the circle again as she went 6 2/3rd innings and allowed five runs on eight hits while striking out three batters and walking four.

The Lady Panthers are set to have a busy week this week, weather permitting, as they were scheduled to play games every day from Monday to Friday.

On Monday, they play host to Wahama before playing road games the next three days at Man, at Johnson Central, and at Chapmanville. The Lady Panthers will return home on Friday and host sectional opponent Buffalo.