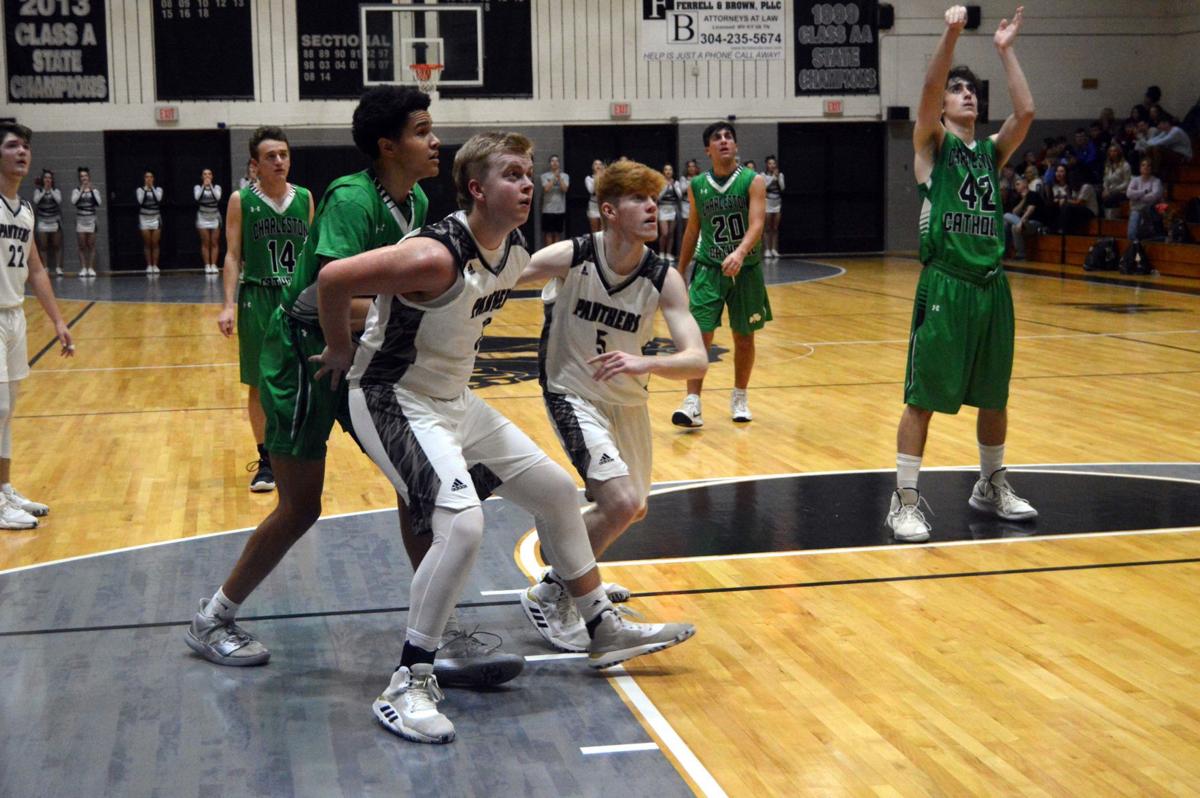 Tug Valley big man Easton Davis blocks out Charleston Catholic’s Aden Satterfield while Joby Sorrell (5) storms in for the rebound in the Panthers’ 48-45 loss to the Irish on Saturday inside the Tug Valley High School gymnasium. 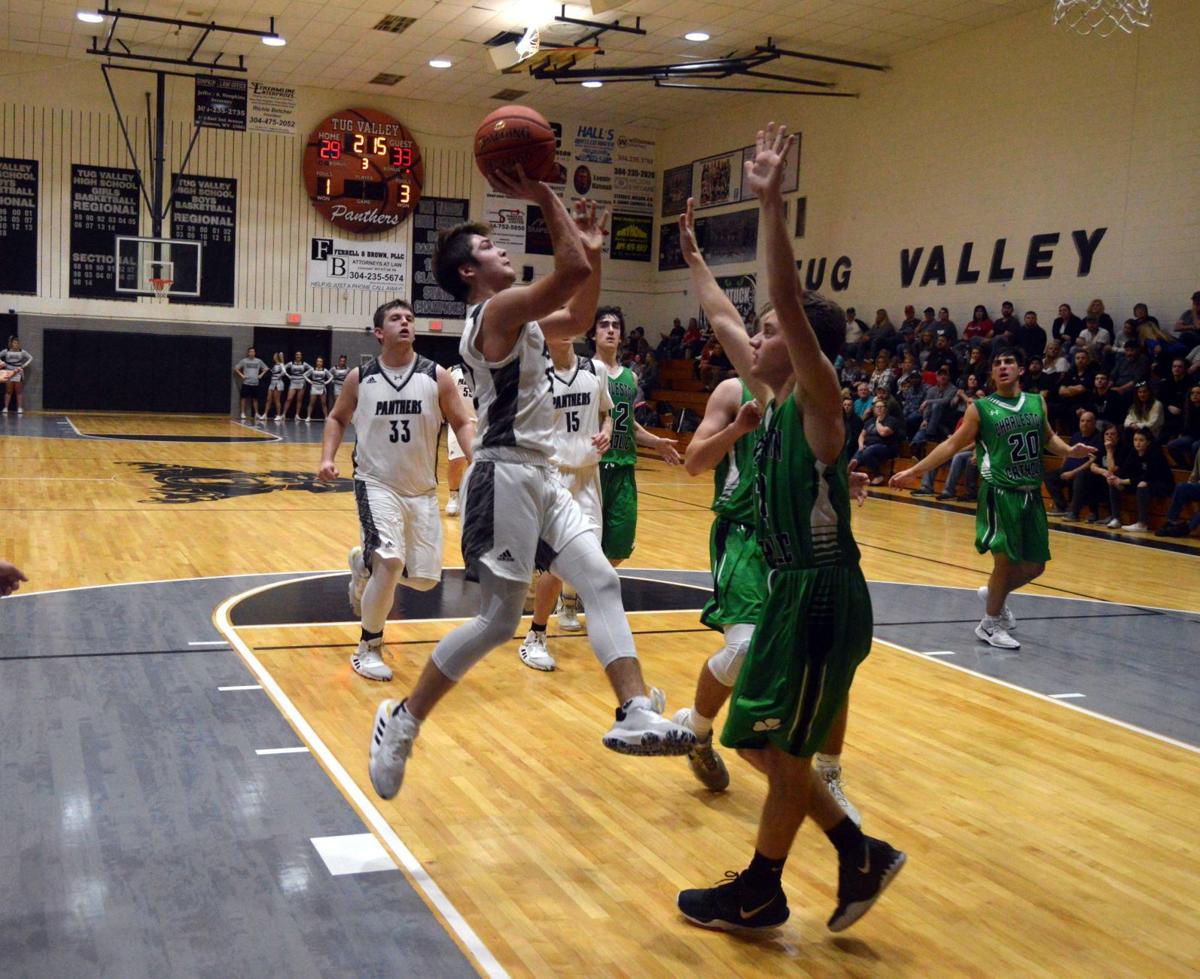 Tug Valley’s Caleb May shoots a shot over a Charleston Catholic defender during the Panthers’ tough 48-45 loss to the Irish on Saturday.

Tug Valley big man Easton Davis blocks out Charleston Catholic’s Aden Satterfield while Joby Sorrell (5) storms in for the rebound in the Panthers’ 48-45 loss to the Irish on Saturday inside the Tug Valley High School gymnasium.

Tug Valley’s Caleb May shoots a shot over a Charleston Catholic defender during the Panthers’ tough 48-45 loss to the Irish on Saturday.

NAUGATUCK — The Tug Valley Panthers picked up their first win of the season on Friday night at home against sectional foe Van as they cruised to the 66-32 win.

The Panthers came out and played ferocious defense from the opening tip as they held Van to only three points in the first quarter of play and jumped out to the 14-3 lead.

Coach Rabbit Thompson’s club kept up the tight defense in the second quarter as they held the Bulldogs to only two points as they took a commanding 35-5 lead into the halftime locker room.

Van was frigid from the floor in the first half, hitting only 2-23 shots from the field. Tug Valley was paced by Caleb May with 10 first half points while Easton Davis followed with nine.

The visiting Bulldogs finally found a little bit of a rhythm in the second half as coach Thompson subbed heavily for the remainder of the game, but the Panthers still won each quarter by two points and secured the 34-point victory.

May and sophomore big man Ethan Colegrove led Tug Valley with 16 points each, with Colegrove chipping in nine in the second half. Colegrove finished with a double-double, as he also snatched down 12 rebounds.

Davis was the third Panther to land in double figures as he notched 12 points and yanked down nine boards, including six on the offensive end. Justin Hall just missed landing in double digits finishing with nine points.

Van was led by David Stewart as he was the lone Bulldog to land in double figures finishing with 12 points.

CHARLESTON CATHOLIC 48, TUG VALLEY 45: The Tug Valley Panthers lost another tight game to a top ranked team on Saturday night, as they fell by a final of 48-45 to No. 5 Charleston Catholic in a game at the TVHS gymnasium.

The game was a back-and-forth affair from the opening tip as Tug Valley jumped ahead to an early 9-6 lead after a three by Justin Hall and a bucket by Ethan Colegrove midway through the first quarter, just to see the visiting Irish rally and take a 13-12 lead into the second stanza.

In that second frame, the two teams continued trading blows as Tug Valley knotted the game back up at 15 after a long three by Ian reed. But the Irish closed the quarter on another run and took a 23-20 lead into the halftime locker rooms.

Coming out of the break, the Panthers got a bucket from Easton Davis to trim the lead to one at 23-22, but the Irish then went on a 7-0 run to push their lead to 30-22 and coach Rabbit Thompson was forced to call a timeout.

The Panthers kept chipping away at the Charleston Catholic lead and had it trimmed down to four at 37-33 going into the fourth.

Following a slow start in the final quarter for both teams, junior guard Caleb May hit a big three to bring Tug Valley to within one at 39-38 with 3:50 to go in the game.

Charleston Catholic coach Hunter Moles forced his team to slow it down on the offensive end as they began to move the ball around the perimeter and eat up some valuable game clock until a bucket by Marshall Pile gave them a 41-38 lead with 1:50 to play.

May then scored seven points in the final minute of play to keep the Panthers in the game as they had a chance to tie it at the buzzer, but Ian Reed’s long three clanged off the iron as the horn sounded and the Irish held on for the three-point win.

The Panthers were led in scoring by May who fired in 18 points and three assists while Colegrove also joined him in double figures with 11 points on 5-7 shooting.

Davis added eight points for Tug Valley while Reed finished with three on 1-10 shooting but dished a team high five assists and picked up two steals. Justin Hall rounded out the scoring with five.

Aiden Satterfield led Charleston Catholic in scoring with 11 points while Suddeth and Pile each scored 10.

Tug Valley’s record moved to 1-4 on the season after they split the pair of games to close out 2019.

Their first contest in 2020 will be on Friday, Jan. 3, in an important home game against bitter rival Tolsia. Tip-off is scheduled for 7:30 p.m. in Naugatuck.