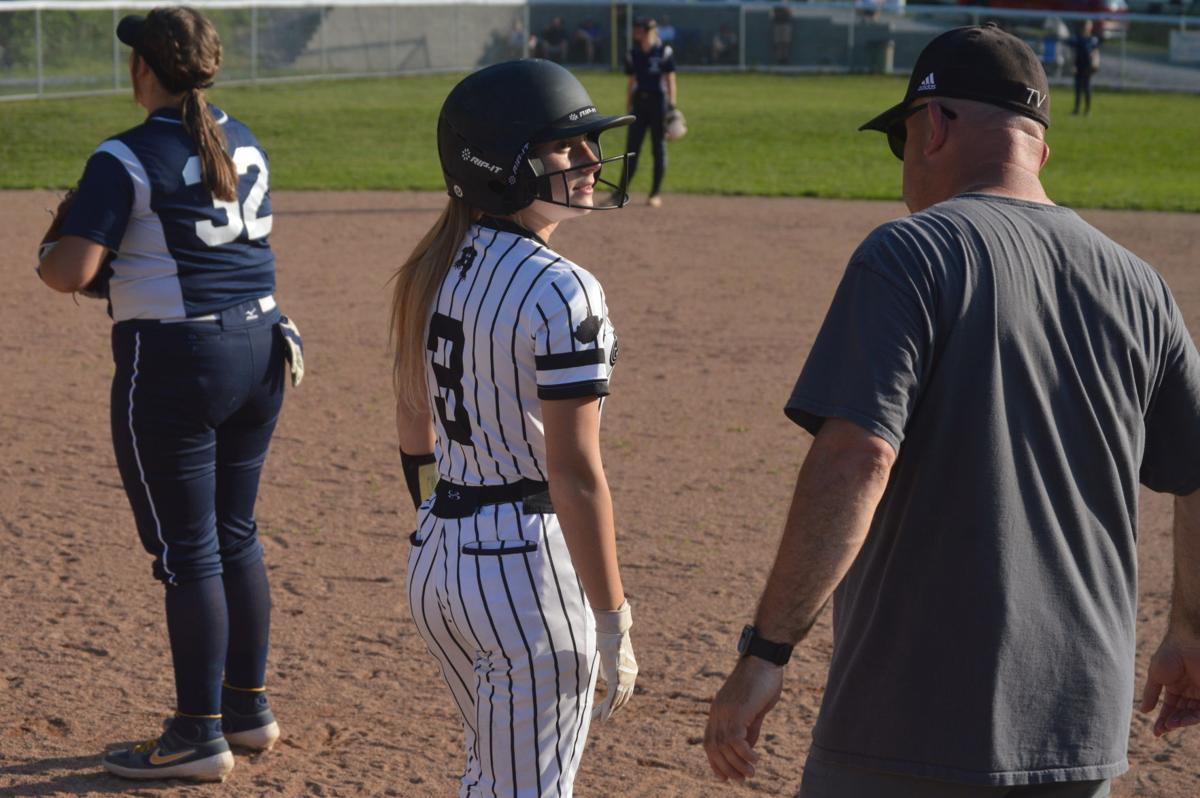 Tug Valley's Tailyn Russell listens to assistant coach Doug Kennedy during the Lady Panthers 7-4 loss to Buffalo in the Class A Region IV Section I Tournament on Saturday, June 5, 2021 in Naugatuck, W.Va. 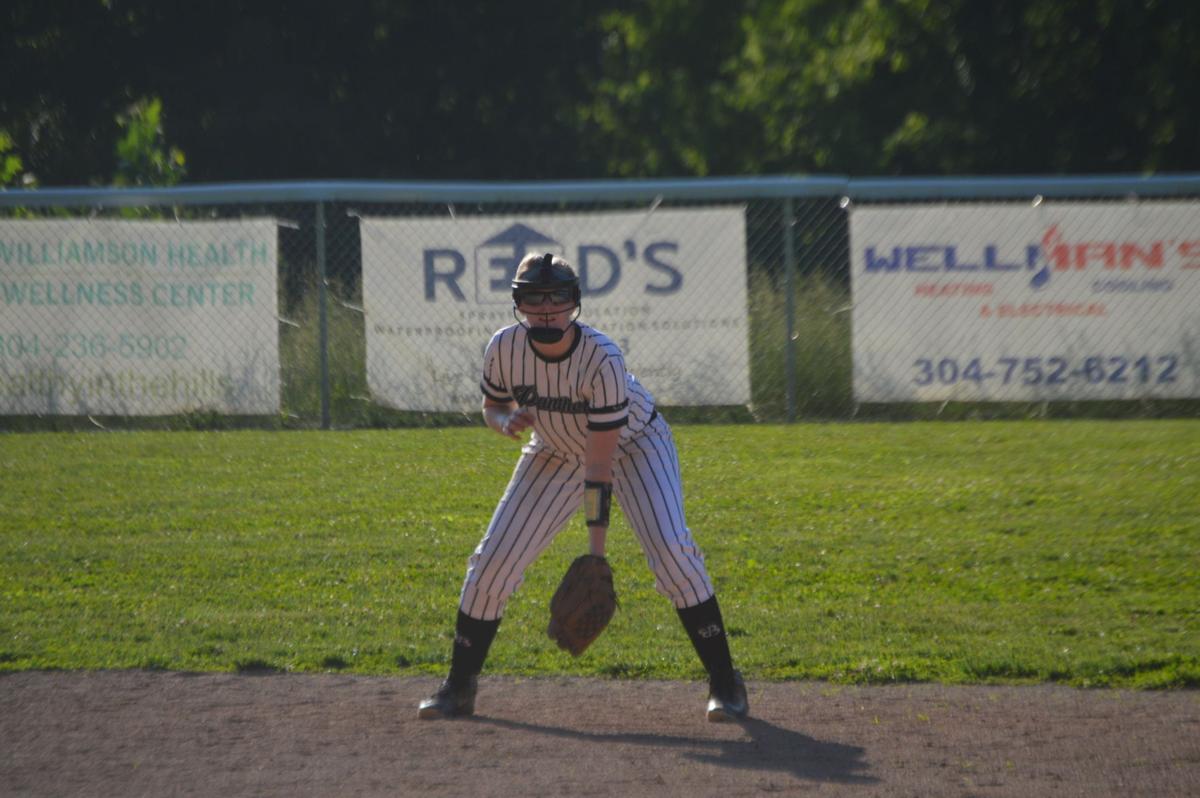 Tug Valley senior 2nd baseman Kaitlyn Copley readies on defense during the Lady Panthers 7-4 loss to Buffalo in the Class A Region IV Section I Tournament on Saturday, June 5, 2021 in Naugatuck, W.Va.

Tug Valley's Tailyn Russell listens to assistant coach Doug Kennedy during the Lady Panthers 7-4 loss to Buffalo in the Class A Region IV Section I Tournament on Saturday, June 5, 2021 in Naugatuck, W.Va.

Tug Valley senior 2nd baseman Kaitlyn Copley readies on defense during the Lady Panthers 7-4 loss to Buffalo in the Class A Region IV Section I Tournament on Saturday, June 5, 2021 in Naugatuck, W.Va.

NAUGATUCK — No. 4 seed Buffalo kept their season alive on Saturday afternoon in what was an elimination game for the Class A Region IV Section I Tournament as the Lady Bison knocked off No. 3 seed Tug Valley by a final score of 7-4.

“We’re really beat up, our pitcher is playing hurt and our catcher is hurt from a play at the plate against Sherman,” Buffalo head coach Bill Rasnake said after the big win. “I owe everything to the girls tonight, they gutted it out and deserve all the credit...overall it was a great team win, it really was.”

The Lady Bison (13-11) took the lead in the top of the first inning and never looked back as Marshall commit Abby Darnley ripped a solo home run over the center field fence to give her team the 1-0 lead.

Later in the inning Rachel Affolter pushed the lead to 2-0 when her RBI double scored winning pitcher Alex Hill who had reached base with a single.

The Lady Panthers (17-14) got one of the runs back in the bottom of the first as speedster Cassidy Griffey lined a ball into the left field corner and zoomed around the bases for her second inside-the-park home run in as many days to trim the Buffalo lead to 2-1.

The Lady Bison had their biggest inning of the game in the top of the third as Hill helped her own cause and ripped a two RBI triple into right centerfield to push the lead to 4-1. The lead swelled to 5-1 when Hill scored on a RBI groundout from Rilsey Russell.

Head coach Rocky Hall’s Lady Panthers scored their second run in the ensuing half of the third inning after Griffey walked and then came around to score on an RBI triple from Autumn Hall to cut the lead to 5-2.

Buffalo got the run back in their half of the fifth inning when Abby Darnley drew a walk and then came in to score after an error by the Tug Valley first baseman to push the lead to 6-2.

The Lady Panthers threatened in the bottom of the 6th inning when Griffey came up with runners on 1st and 2nd and two out and delivered an RBI double that scored Haleigh Muncy to make the score 6-3.

After Alyssa Newsome drew a walk to load the bases, Autumn Hall came to the plate representing the go ahead run. Buffalo got out of the jam however as Hall ripped a hard hit grounder to third but three bagger Dara Harmon snagged it and stepped on the bag to leave the runners stranded.

The Bison scored their final run in the top of the seventh as Katie Darnley singled, stole second, advanced to third on a Tug throwing error, and then scored on a RBI groundout from twin sister Abby Darnley to push the lead to 7-3.

Junior slugger Emily Hatfield led the bottom half of the seventh inning off with a bang as she blasted a solo home run to deep center field but that was all the Lady Panthers could muster as Hill retired the final three batters in order to end the game.

Hill earned the win in the circle as she pitched the complete game allowing just the four runs on 11 hits while striking out six batters and walking two.

Hall took the loss for TVHS as she was tagged for the seven runs (five earned) on six hits and struck out 14 Buffalo batters compared to only two walks.

With the win the Lady Bison improved to 13-11 and stay alive in postseason play and will have a rematch at No. 1 seed Sherman (14-4) in another elimination game on Monday night at 6 p.m. Coach Rasnake hopes that his young team will use the win against Tug Valley as a confidence boost to continue winning moving forward.

“These girls know that Tug Valley is a really good team,” coach Rasnake said after the game .”We’ve got 11 freshman and I’m hoping that picking up a win over a good team like Tug gives these girls a little more confidence and excitement that they can go onto the next round and keep winning.”

With the loss Tug Valley saw their 2021 regular season come to a close with a record of 17-14. The Lady Panthers will say goodbye to the services of two seniors as Kaitlyn Copley and Alyssa Newsome played in their final game for the silver-and-black.

NAUGATUCK — No. 3 seed Tug Valley made quick work of No. 5 seed Van in an elimination game on Friday night in Naugatuck as the Lady Panthers kept their season alive with a 15-1 win.

The visiting Lady Bulldogs scored their lone run in the top of the first inning when Emma Wilcox doubled and then scored on a RBI single off the bat of Hope Gaumond as they took the early 1-0 lead.

Tug Valley (17-13) scored four runs in the first inning, added a single run in the second, before plating nine more in the third and one in the fourth to reach their final tally of 14.

Kinna Justice was credited with the win in the circle for TVHS as she pitched a complete game allowing just the one run on two hits with seven Ks and no walks.

Wilcox took the loss for Van as she was tagged for 15 runs in her four innings allowing six hits and issuing 13 free passes. She struck out four Tug Valley batters.

Cassidy Griffey paced coach Rocky Hall’s club at the plate as she finished a perfect 2-2 with an inside-the-park home run, two RBIs and three runs scored. Justice helped her own cause as she also finished with two base hits and knocked in a run.

Autumn Hall knocked in two runs with a double in the bottom of the first inning and Kyla Waller ripped a single to round out the hitting for the Panthers.