Sign Up
Log In
Purchase a Subscription
You are the owner of this article.
Edit Article Add New Article
You have permission to edit this article.
Edit
Welcome, Guest
Home
News
COVID-19 Vaccine
Sports
Features
Photos
Opinion
Obituaries
e-Edition
Contests
Classifieds
Cars
Homes
Jobs
Legals
HD Media
No Thanks
1 of 5 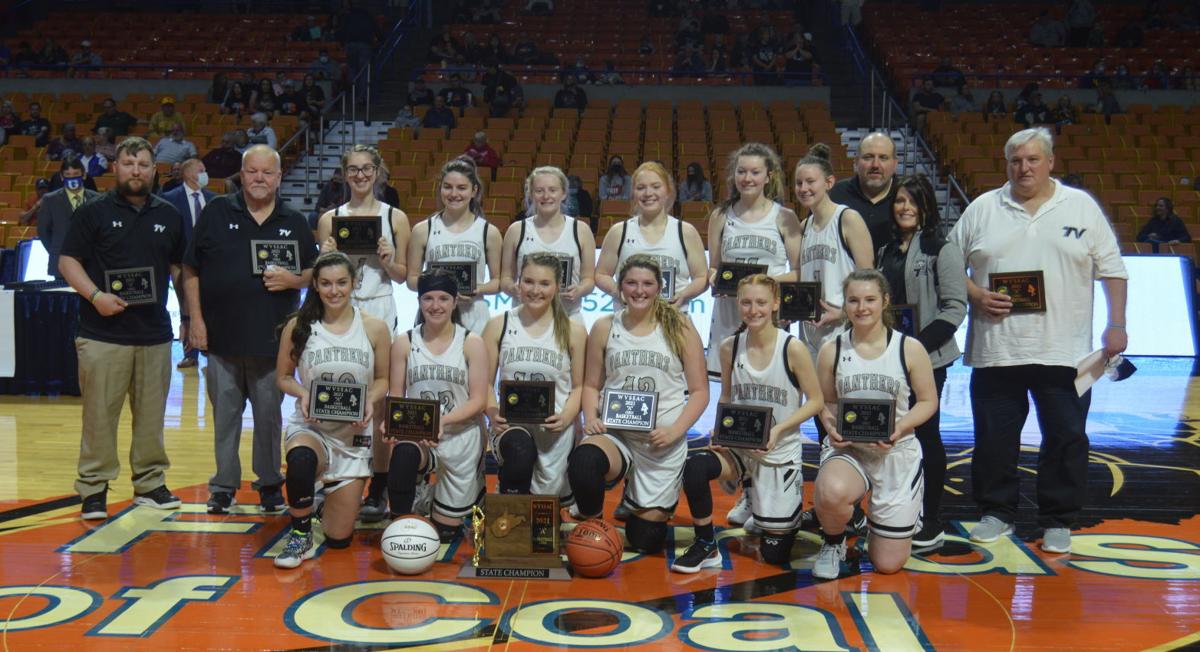 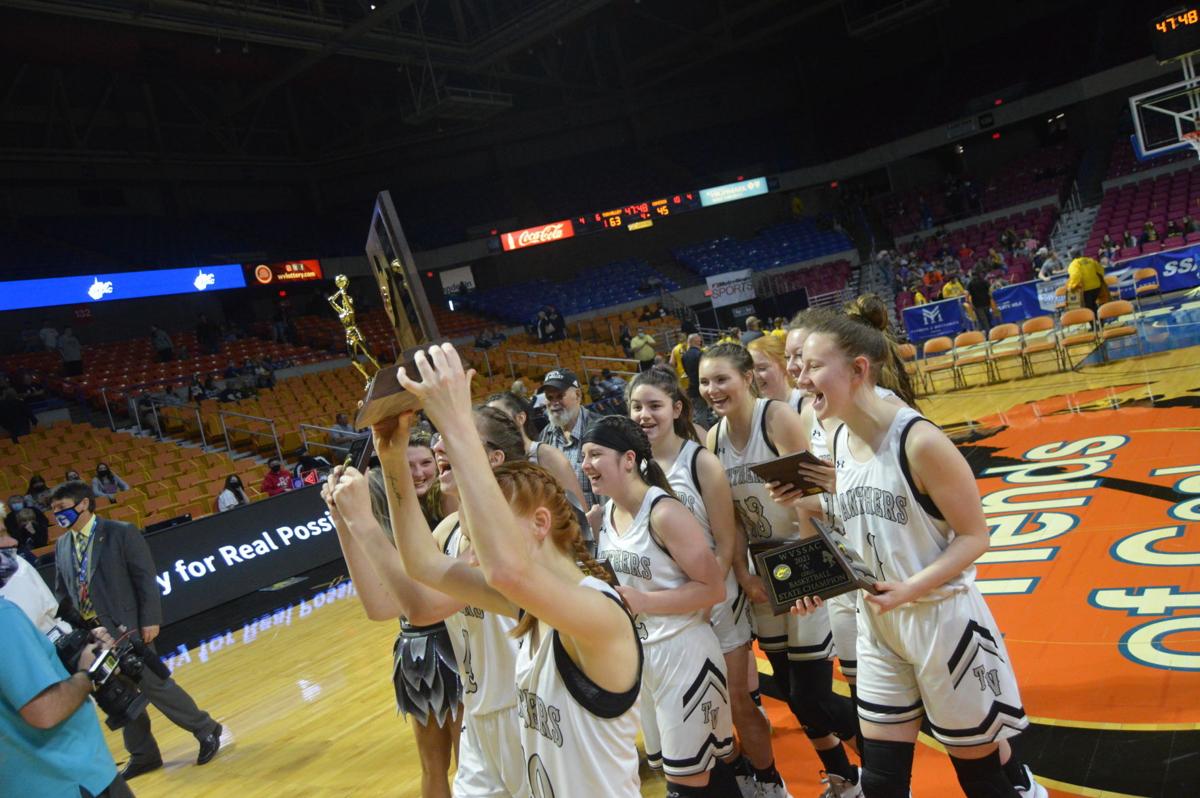 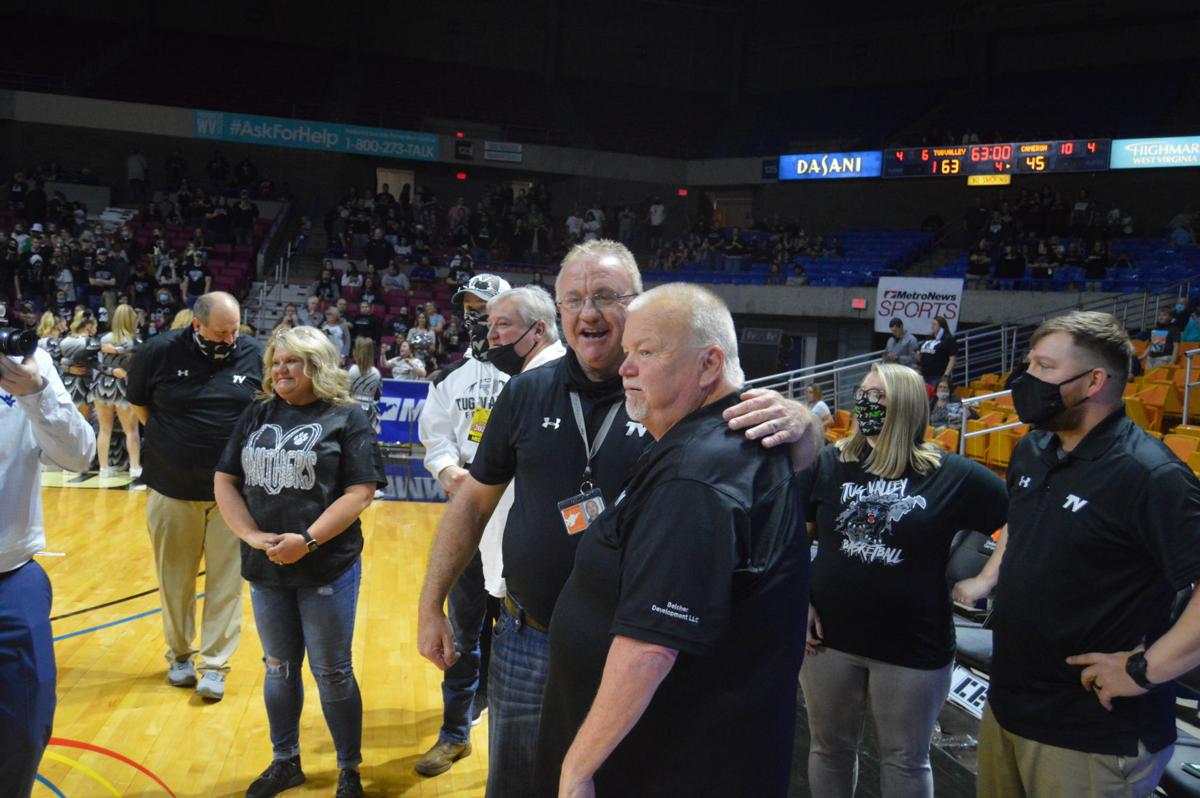 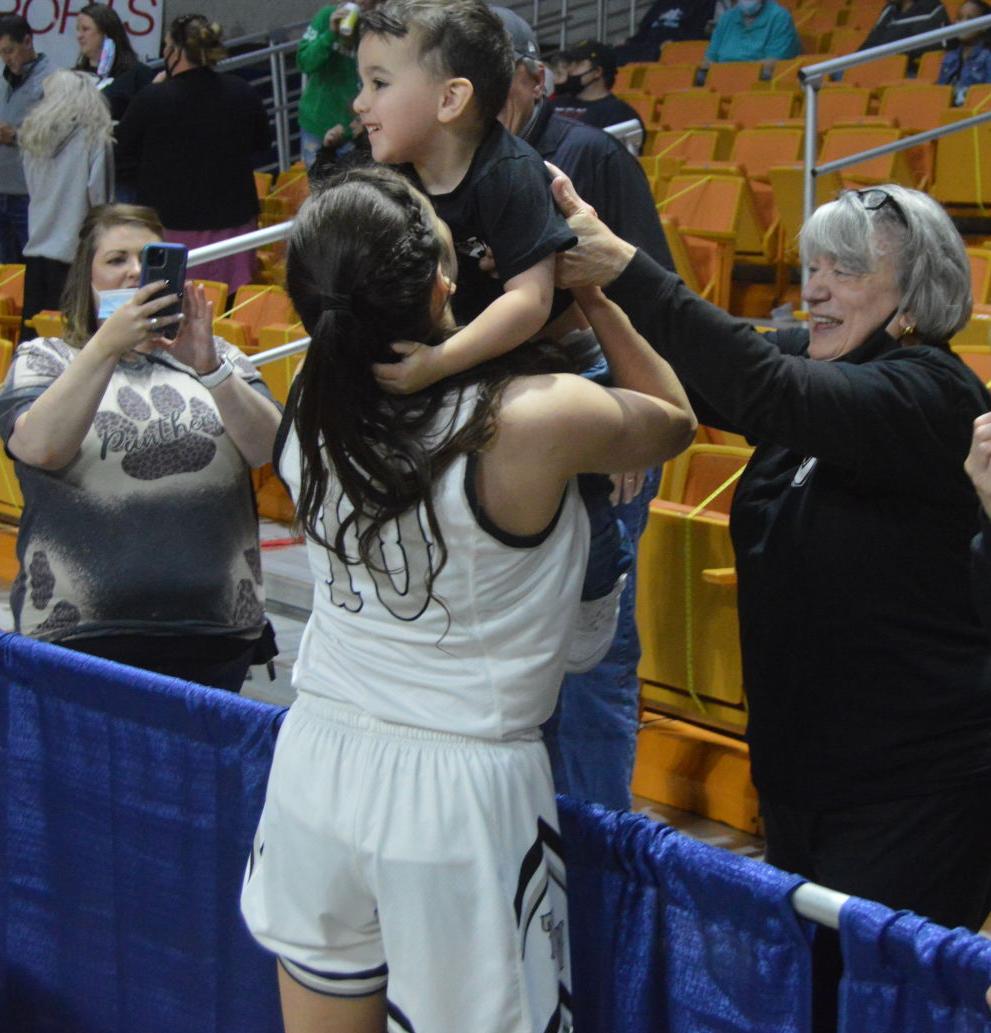 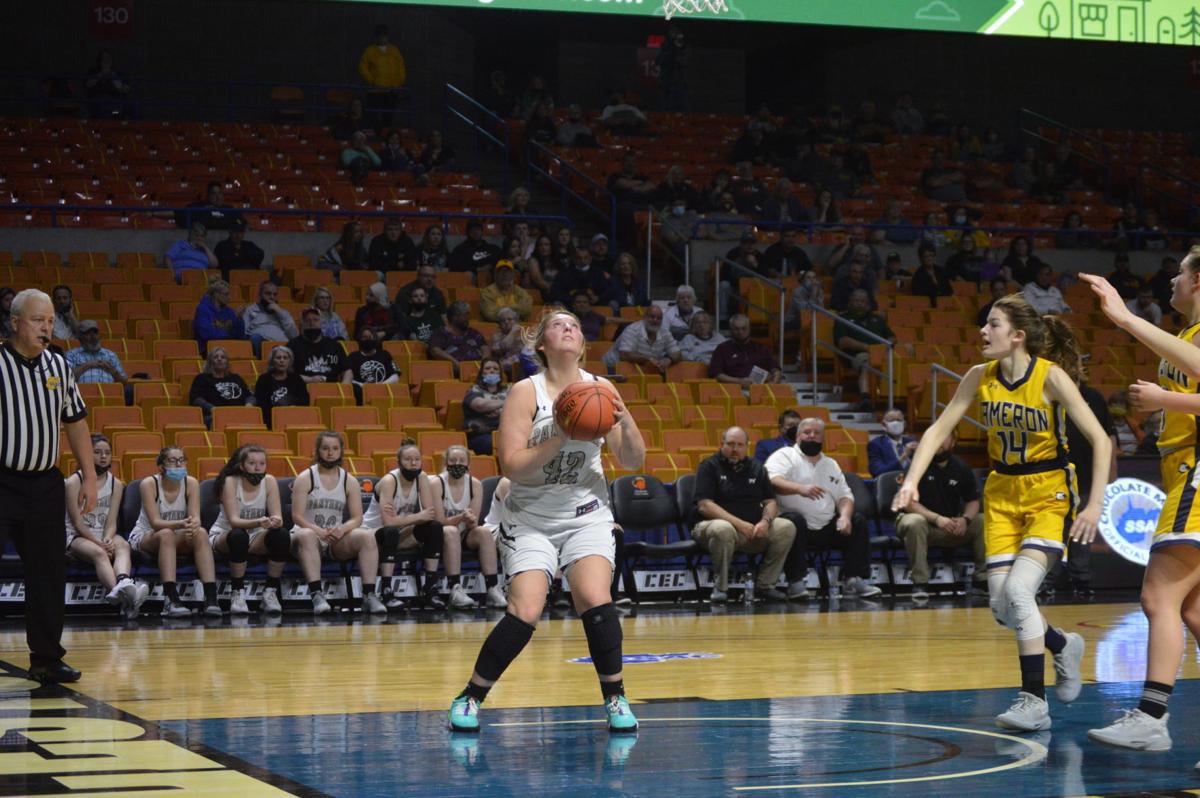 CHARLESTON —Despite not being ranked No. 1 in the AP Poll all season long, the Tug Valley Lady Panthers left zero doubt that they are the best girls basketball team in Class A in West Virginia as they easily defeated Cameron 63-45 on Saturday morning in the Championship Game of the WVSSAC 2021 Girls Basketball Class A State Tournament at the Charleston Coliseum.

The Lady Panthers (15-2) claimed the first girls state championship in school history and only the second in the history of Mingo County, joining the 1990 Burch Lady Bulldogs as the only teams to bring the crown back to Mingo.

Tug Valley ran through their three tournament games in dominating fashion defeating their opponents by margins of 43, 18, and 18 points, good for an average margin of victory of over 26 points per game.

Coach Farley, who has historically been a self-proclaimed offensive minded coach, credited the strong Tug Valley defense for guiding them to the state championship. The Lady Panthers held opponents to only 33 points per contest during the three games and had 48 steals in the tournament, good for 16 thefts per game, and forced a total of 68 turnovers .

“I think that the half-court defense that we played thanks to coach (Seth) Ooten and coach (Edwyn) May who implemented that thing was the difference. People told me for years that ‘defense wins championships,’ and who knew that they knew what they were talking about, I thought it was all about shooting threes,” Farley joked. “But it’s all about these girls, these young ladies are gutsy and aren’t afraid of anything. We’re kind of undersized really but we play big and we play tough, I’m very proud of them.”

After the Lady Dragons (18-2) took a 12-8 lead late in the first quarter of play, the Lady Panthers went on one of their patented runs as they scored 11 straight points thanks to a pair of threes from Kaylea Baisden and a trey from Audrey Evans to take a 19-12 lead with 5:37 left in the second quarter.

After a three from Cameron’s Lili Neely stopped the run and brought the TV lead to 19-15, Tug Valley promptly went on another 12-0 run, with five points coming from Makayla May in the stretch, to extend their lead to 31-15 with 23 seconds left in the half.

Cameron gained some momentum going into the break as 6’1” freshman center Ashlynn Van Tassell got a half court heave to go at the buzzer to bring the score to 31-18 in favor of Tug Valley going into halftime.

Coming out of the locker rooms the Lady Dragons sank another three as Emma Whipkey drained a long ball to cut the lead to ten at 31-21, but Tug Valley senior Alyssa Newsome answered with one of her usual dagger 3’s to push the lead back to 13 at 34-21.

Cameron never could get the Tug Valley lead below 12 points from that point on as the Lady Panthers made the plays down the stretch, including shooting 11-12 from the free-throw line in the fourth quarter, to secure the win.

Baisden turned in another huge performance on the floor of the Charleston Coliseum as she led Tug Valley with a game high 25 points while also dishing out nine assists and grabbing seven rebounds.

During the three game tournament, Baisden scored 75 total points good for an average of 25 points per game and sank 13 three-pointers, including the new tournament record nine 3’s in the round one win over Pendleton County. Baisden did much more than score the ball however as she averaged eight rebounds, five assists, and just under four steals per game.

“I just came out and knew what I had to do,” an emotional Baisden said of her performance after the win. “I had to win it for my seniors.”

The seniors she referred to are May and Newsome who each finished their Tug Valley careers in fine fashion.

May recorded another double-double in the title game netting 15 points and grabbing 11 rebounds. She averaged 12 points and 13 rebounds per game for the tournament while playing tough defense in the paint against 6’1” post players in Cameron’s Van Tassell and Tucker County’s Kadie Colebank in the semifinals.

Newsome saved her best performance in Charleston for the state championship game as she also scored 15 points, including sinking a trio of three-pointers, and averaged 11 points for the three games.

Both May and Newsome said that they have been eyeing the 2021 season, which was the first of two trial years of the WVSSAC’s new 4-class system, as their chance to make a run at the school’s first girls state title.

“This whole week has been emotional for me and Makayla, for the whole team,” Newsome said. “We’ve worked really really hard for this, and now that we’ve actually made it and we’ve won it means so much to us to end like this.”

Junior Autumn Hall was the leading rebounder in the championship game as she grabbed 13 boards, six on the offensive end, and contributed five points. Hall averaged 9.3 rebounds per game for the tourney.

Evans rounded out the scoring for Tug Valley against Cameron with three points but she led the team in steals once again with five while also grabbing seven rebounds and dishing out six assists. Evans was a pest defensively all tournament picking up 18 steals, good for six per game.

For Cameron, Van Tassell led the way as she turned in a nice game finishing with 15 points and grabbing 14 rebounds. Lili Neely, who was the team’s leading scorer coming in averaging 17 points per game, was held to 11 points on only 3-21 shooting from the field.

Tug Valley held Tucker County to 16-60 shooting as a team for the game, including 8-29 attempts from three-point range.

TVHS finished the year with a 15-2 record in a season that was delayed and shortened from its usual length due to the ongoing COVID-19 pandemic.

Coach Farley, who is in his second stint coaching the Lady Panthers as he led them to back-to-back state tournament berths in 2003 and 2004 and a semifinal appearance, said that he is happy to finally bring a girls’ title back to the fans in Naugatuck to go along with the three state titles won by the boys program.

“We’re very pleased that we can represent our school and the tradition of Tug Valley basketball,” Farley said. “Down in our neck of the woods, and we are certainly starting to build our other programs, but basketball is what people focused on for a long time. I told the girls ‘you can be All-State, you can be All-Tournament, you can be a lot of those things. But the thing that people will never forget is when they look up on that wall in our gym and see your picture and know that you made history.’ I’m very proud of them.”

Despite dominating Class A the Lady Panthers unexplainably only had two players named to the All-Tournament team, May and Baisden, while runner-up Cameron had three players named.

The Lady Panthers will lose the services of May and Newsome but will return a strong senior class next season with Baisden, Evans, and Hall all returning with hopes of winning back-to-back state titles.

Coach Farley completed his eighth season on the sidelines at TVHS and now has a career record of 119-43, good for a winning percentage of .734 percent.