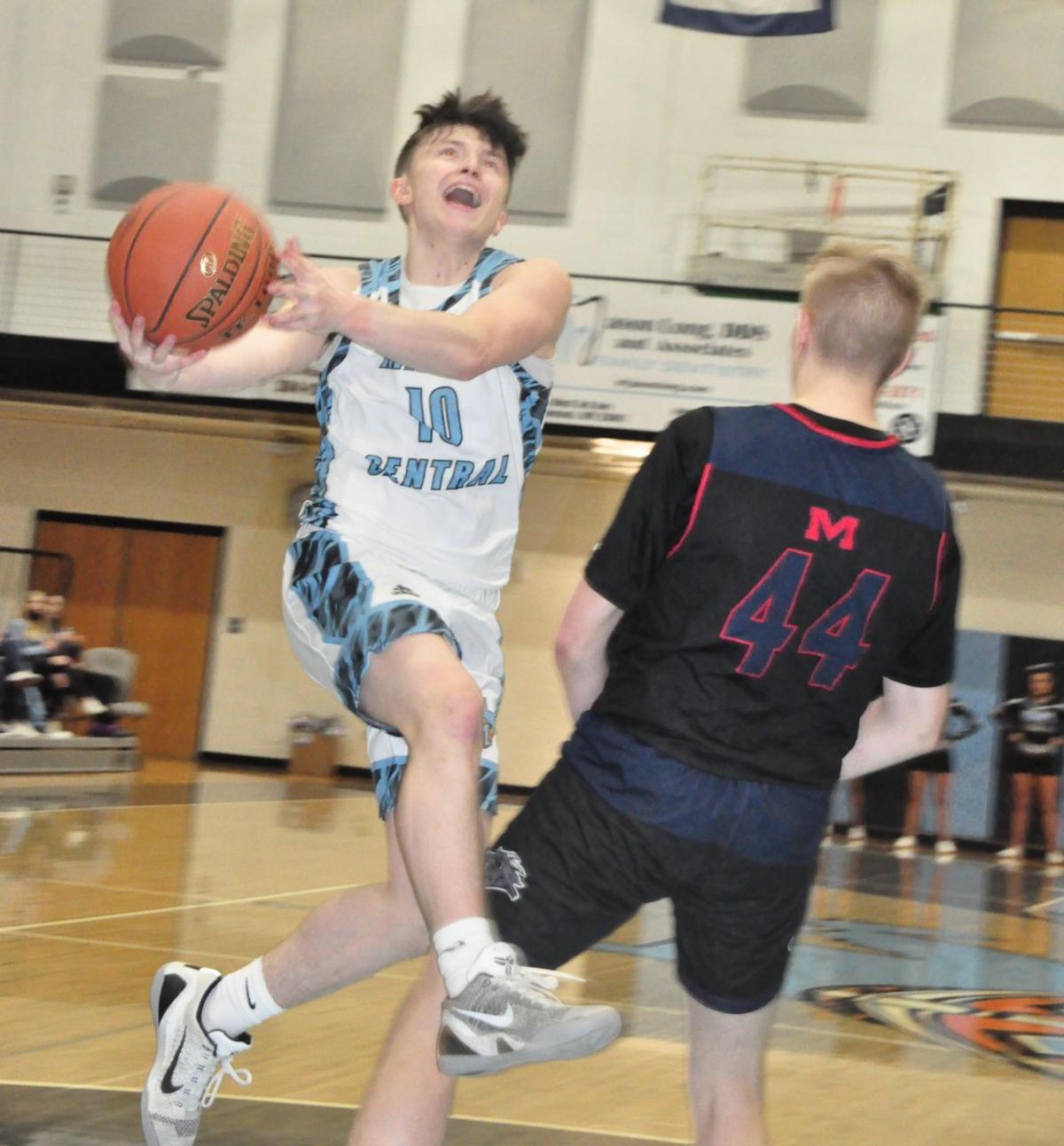 Mingo Central sophomore guard Kyle Campbell goes up for an and one while Man’s Jackson Tackett is called for a foul during the Miners 73-53 loss to the Hillbillies on Friday, April 2, 2021 inside the MCHS Gymnasium. 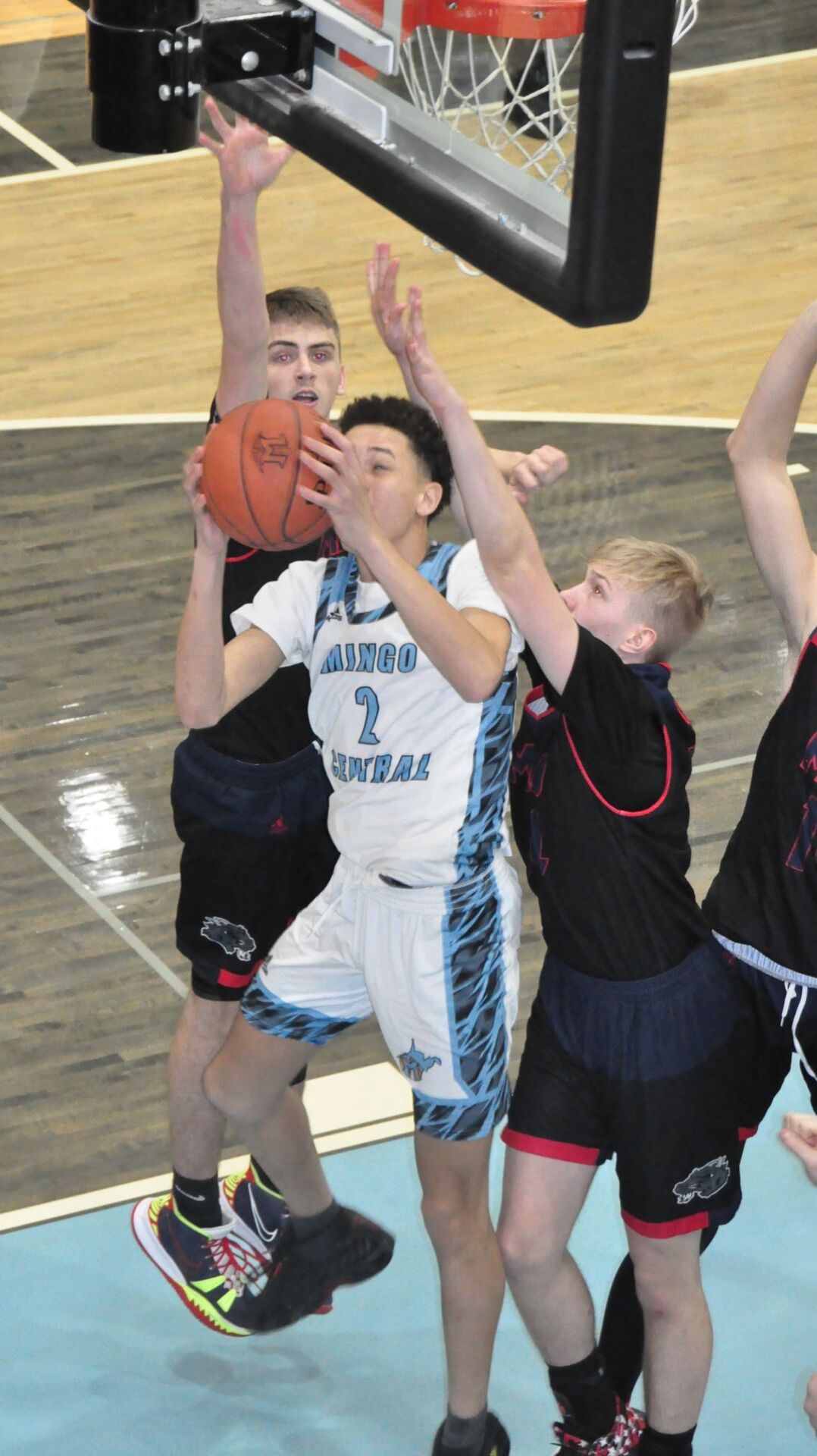 Mingo Central junior Jarius Jackson finishes through contact during the Miners 73-53 loss to Man on Friday, April 2, 2021 inside the MCHS Gymnasium.

Mingo Central sophomore guard Kyle Campbell goes up for an and one while Man’s Jackson Tackett is called for a foul during the Miners 73-53 loss to the Hillbillies on Friday, April 2, 2021 inside the MCHS Gymnasium.

Mingo Central junior Jarius Jackson finishes through contact during the Miners 73-53 loss to Man on Friday, April 2, 2021 inside the MCHS Gymnasium.

The Mingo Central Miners have enjoyed a strong home court advantage at their 2,200-seat gym since the school’s inception in 2011.

The Man Hillbillies have certainly felt that wrath over the years.

Last year, the Billies went to Miner Mountain and lost 67-57. Later on, Man lost 78-71 to Mingo Central at home before downing the Miners 70-68 in the opening round of the Class AA Region 4 Section 2 Tournament, overcoming a 15-0 hole to start the game.

Man coach T.J. Blevins said it was good to finally get a win on Mingo’s hardwood.

“That was our first win here,” Blevins said. “We started out slow but I think people saw there in the fourth quarter how we should be playing. That was the real us and we got after it a little bit. Like I told these guys, it’s always tough to get a win on the road. And when you having a state ranking you are going to get everyone’s best shot. You will get team’s best shots no matter where you play.”

The Billies (6-1) were able to bounce back from a heartbreaking 68-63 loss at Class AAA county rival Logan just three days prior in a game Man blew a 13-point lead.

Leading 54-45 after three, the Hillbillies finally broke the game open in the fourth quarter, outscoring the Miners 19-8, leading my as many as 20 points and putting the finishing touches on the win with three slam dunks.

Man’s leading scorer, 6-foot-7 junior center Austin Ball, was held to just four points on a pair of slams. He was leading the team in scoring with a 23.6 points per game average heading into the Logan game.

Others stepped up the scoring for Man.

Caleb Blevins led the way for the Billies, tossing in 24 points and nailing down five big 3-pointers. Peyton Adams and Ryan Cozart also broke into double digits in scoring with 16 and 10 points respectively. Adams drilled four shots from beyond the 3-point arc. On the night, Man connected on 11 3s.

“Everyone else picked up where other kids left off,” Coach Blevins said. “Hunter Anderson came in and hit a couple of big 3s in the first half. Christian Toler gave us some good solid minutes. We want to continue to expand our player’s roles. We got into a little foul trouble early but the bench bailed us out. We have some good JV kids that I just about inserted tonight but I chose not to because we hadn’t played in three days and were coming off that loss. I wanted to see how we would respond and sure enough we came out sloppy as hell but lucky enough we were leading by seven at the half.”

Justin May canned four treys and led Mingo Central with 16 points. Jarius Jackson had 13 and Kyle Campbell 10. Preston Smith and Ethan Evans had six each. Zion Martin chipped in with two points.

Man was not able to put away the stubborn Miners until late.

Some had thought Man would blow away Mingo right from the start.

“We are figuring it out slowly. We are very inexperienced and very young,” Miners’ coach Stan Elkins said. “Man has a great basketball team. There’s no doubt about that. I think that they will make a deep run in the tournament. They have a great chance to win it. They have a lot of weapons, share the basketball and they are well coached.”

Elkins said Jackson did a fantastic job in shadowing Ball, who didn’t score his first points of the game until the 5:22 mark of the fourth quarter on an alley-oop slam which put the Billies on top 62-49. Ball added a one-handed dunk with 1:08 to go. It would be the only points he would score all night.

“We had Jarius on him most of the night but both of them had two fouls so they were probably a bit passive because they didn’t want to pick up the third foul,” Elkins said. “Jarius is a good player as well. Both of them have been very successful. We were happy to stop him. We were proud of our team’s effort tonight. We competed. We are very young and we are going to continue to learn.”

Up by nine after three, Man finally kicked it into gear in the fourth quarter.

The second dunk by Ball then put the finishing touches on the win as Man led 70-53.

Mingo Central had jumped out to a 7-0 lead early in the first quarter and still led 12-8 after a Jackson three-point play.

It was a lead the Billies did not relinquish.

Man led by as many as 11 points in the second quarter.

Man has six games left in the regular season beginning with Saturday night’s game vs. Independence at Beckley.

“That will be a test,” Coach Blevins said. “They have some big kids and they are a Double-A school.”

Man then plays at Calhoun County on April 5, at Van on April 10, at Tug Valley on April 12 and at Wyoming East on April 14. The regular season finale is set for April 16 at home against River View.

Man has come a long way under Coach Blevins when the Billies suffered through a winless 0-22 season four years ago. The Billies have since won seven and 10 games before last year’s 18-6 mark.

The Billies are hoping to make a run at winning the Class A state championship in“May Madness.”

Mingo Central was slated to host Logan on Saturday night, but a score was not available by press time. The Miners then host county rival Tug Valley on Tuesday and head to Logan on Wednesday for a rematch with the Wildcats.