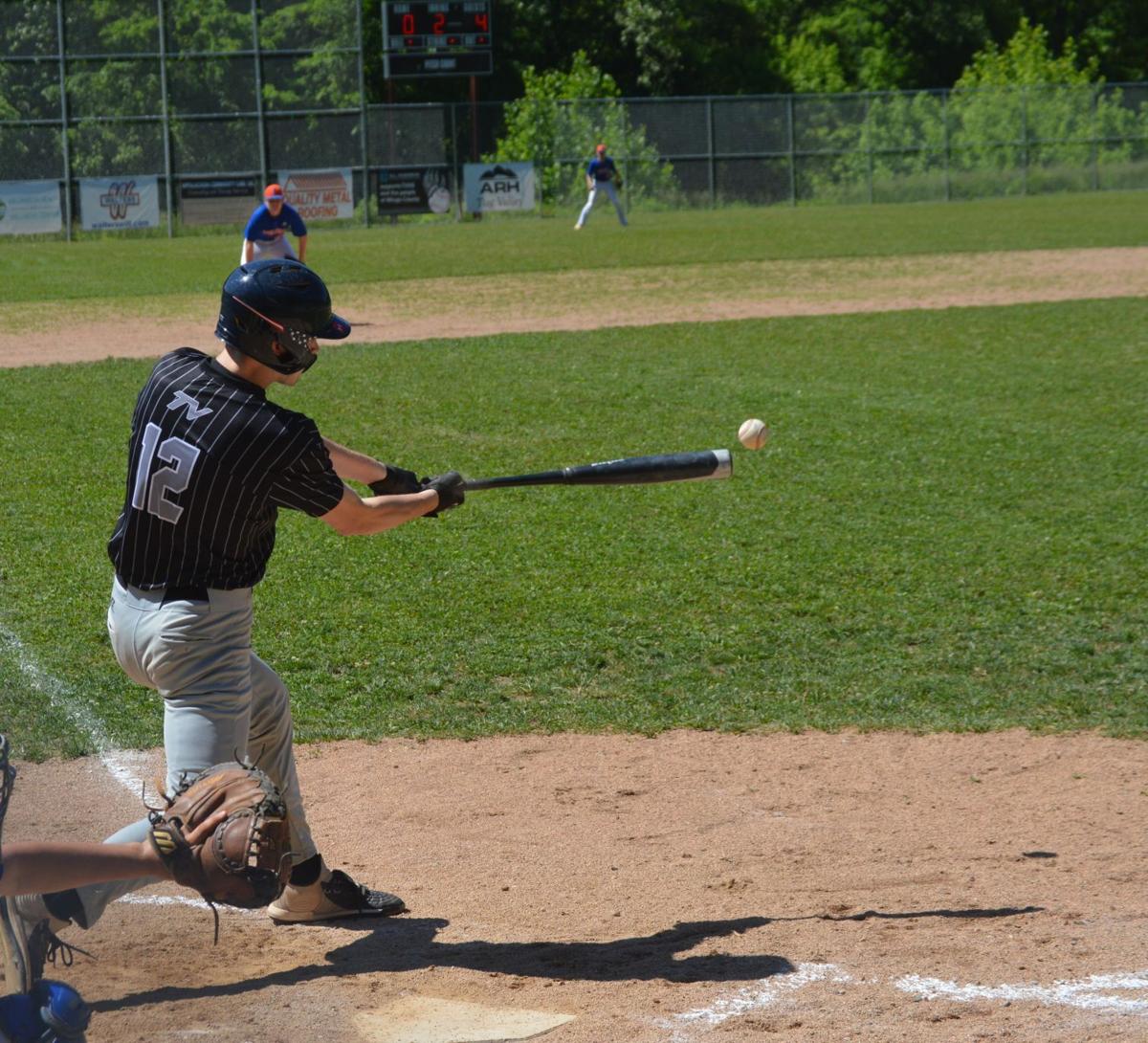 Tug Valley freshman Dakota Ooten lines a basehit into left field during the Panthers opening round sectional loss to Tolsia by a score of 12-4 on Monday, May 31, at Panther Mart Park. 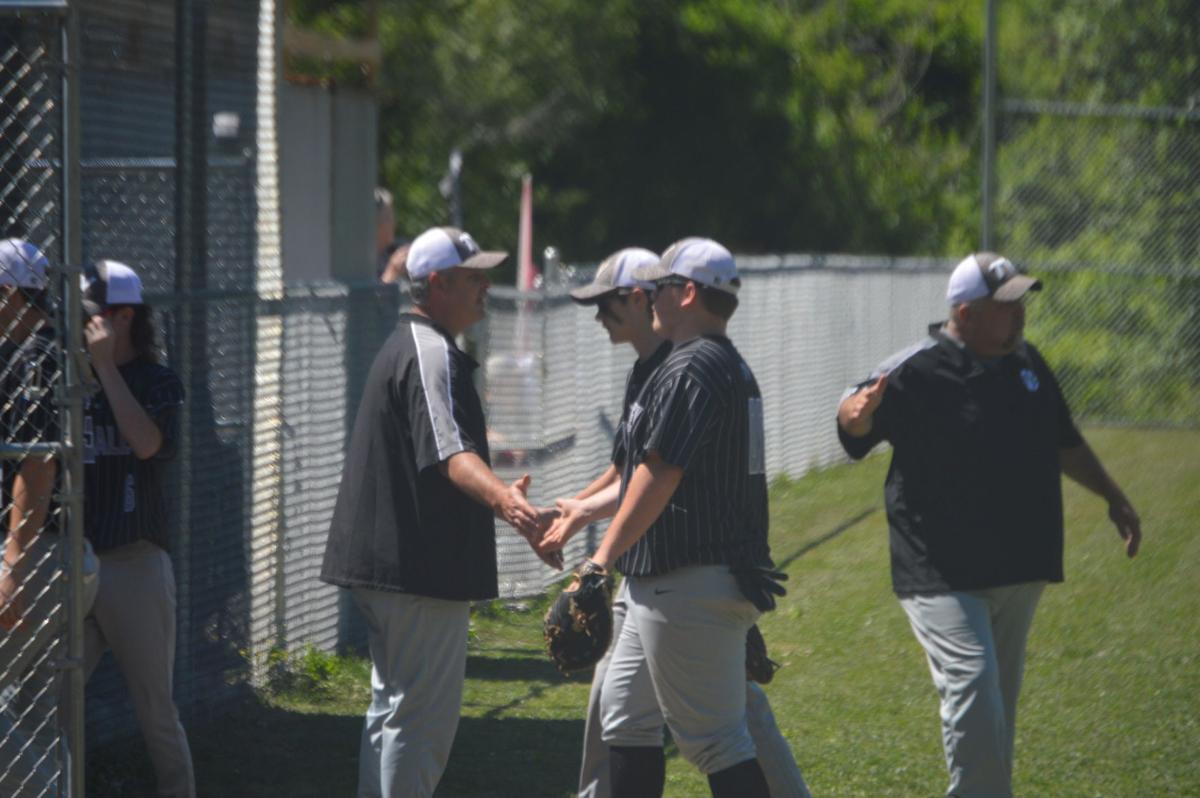 Tug Valley head coach Teddy Hall (left) high fives Shane Russell and Alex Vance during the Panthers opening round sectional loss to Tolsia by a score of 12-4 on Monday, May 31, 2021 at Panther Mart Park.

Tug Valley freshman Dakota Ooten lines a basehit into left field during the Panthers opening round sectional loss to Tolsia by a score of 12-4 on Monday, May 31, at Panther Mart Park.

Tug Valley head coach Teddy Hall (left) high fives Shane Russell and Alex Vance during the Panthers opening round sectional loss to Tolsia by a score of 12-4 on Monday, May 31, 2021 at Panther Mart Park.

SETH — The No. 2 seed Sherman Tide held off a rally from No. 4 seed Tug Valley on Wednesday night in Seth as they came away with the 12-9 win in an elimination game for the Class A Region IV Section I Tournament.

“The boys came out and hit better, executed better. We started showing some signa of fatigue after playing 11 innings last night and started to get comfortable,” Sherman coach Jeremiah Petry said after the win. “We let them crawl back in the game...you know just a couple errors and dribblers and they got back into it. We will make some adjustments tomorrow at practice and work on a few things to prepare for the next game.”

With the win the Tide (21-6) stays alive in the losers bracket portion of the Region IV Section I tournament and will face off against the winner of Thursday’s game between No. 5 seed Tolsia and No. 6 seed Van on Saturday at home. The Rebels and Bulldogs were scheduled to play on Wednesday and then on Thursday but the game was postponed both nights due to weather.

Sherman came out of the gates blazing hot to start the game against the visiting Panthers as they scored eight runs in the first inning of play and held a 12-2 lead after three innings of play.

Tug Valley (8-21) as they scored a run in the fourth inning and four runs in the top of the fifth inning to cut the Sherman lead to 12-7. Hunter Allen came in in relief for Sherman however and held Tug Valley to a single run in each of the final two innings of the game as they held on for the 12-9 win.

Jared Butcher picked up the win on the mound for the Tide as he improved to 6-0 on the season. He went 4.2 innings allowing seven runs (six earned) on six hits while striking out four and walking eight.

Allen pitched 2.1 innings of relief and allowed two runs, one earned on three hits with four Ks and one walk.

Nick Alley started the game for Tug Valley and was handed the loss. He didn’t record an out as he faced three batters, allowing three runs on two hits with a walk.

Justin Hall came in and pitched one inning of relief allowing six runs on six hits with no Ks and two walks. Dakota Ooten pitched the final five innings of the game for TVHS and kept them in the game allowing only three runs (one earned) on five hits with three strikeouts and five walks.

Davy Jarrell had a hit, three RBIs, drew two walks, and scored two runs while Allen also had a hit, knocked in two runs, and drew a pair of walks. Jared Butcher and Alex Kirk each had singles.

Alex Vance finished 2-4 with a triple and four RBIs to pace Tug Valley while Dakota Ooten turned in a 3-4 day at the plate with an RBI and two runs scored. Tanner Kirk, Justin Hall, Shane Russell, and Corey Wilson each had singles and Nick Alley and Zach Hall recorded RBIs for head coach Teddy Hall’s club.

With the loss the Panthers saw their 2021 season come to a close with a record of 8-21. The Panthers fell to the losers bracket after a 12-4 defeat by No. 5 Tolsia in the opening round of the section in a game they committed eight errors defensively.