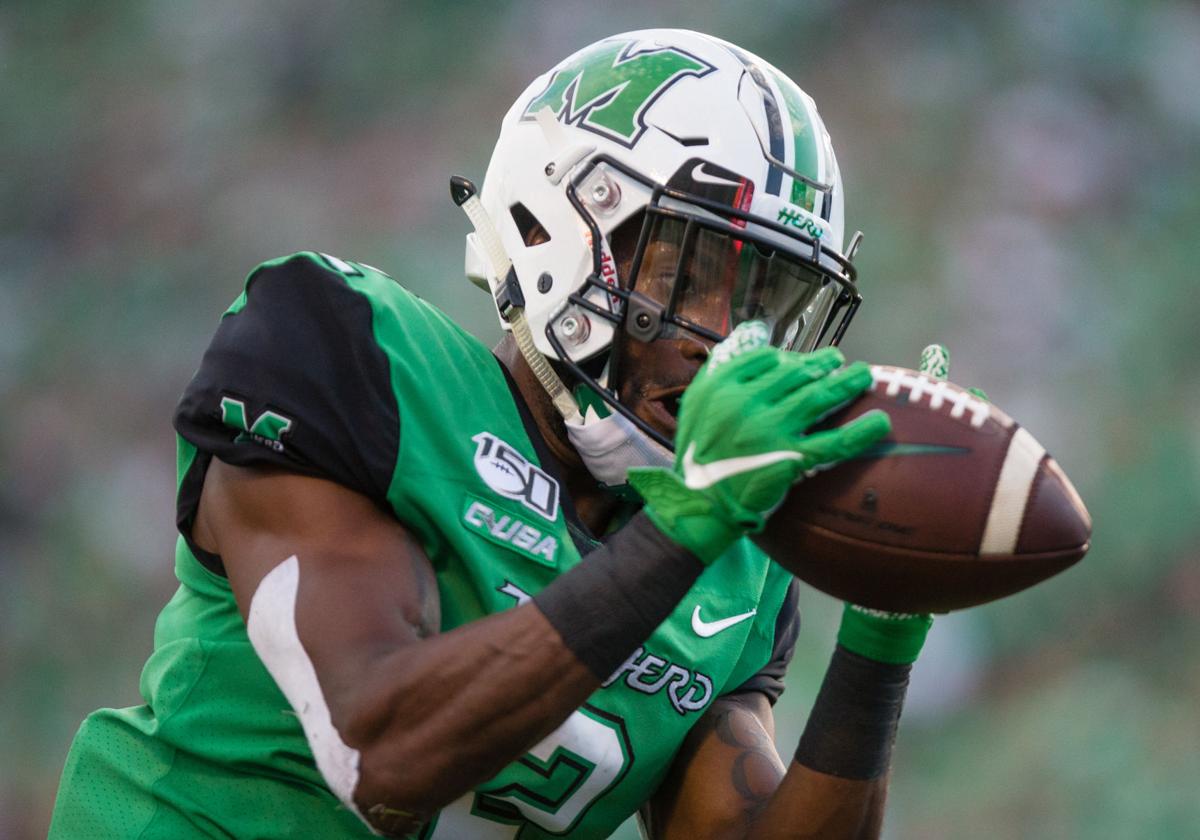 Sholten Singer/The Herald-Dispatch Marshall wide receiver Artie Henry (2) brings down a catch he would then take in for a score against VMI in an NCAA football game on Saturday, Aug. 31, 2019, at Joan C. Edwards Stadium in Huntington, W.Va. 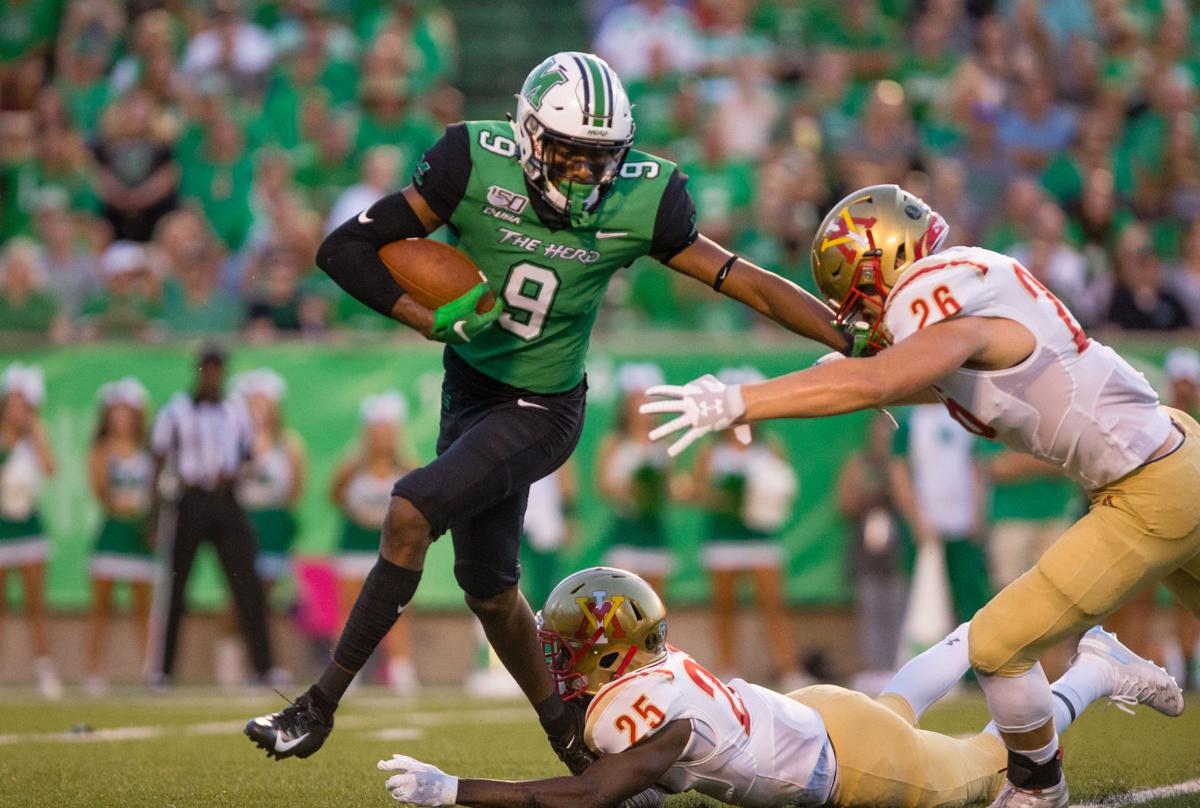 Sholten Singer/The Herald-Dispatch Marshall's Talik Keaton (9) looks for running room as he returns a punt against VMI in an NCAA football game on Saturday, Aug. 31, 2019, at Joan C. Edwards Stadium in Huntington, W.Va.

Sholten Singer/The Herald-Dispatch Marshall wide receiver Artie Henry (2) brings down a catch he would then take in for a score against VMI in an NCAA football game on Saturday, Aug. 31, 2019, at Joan C. Edwards Stadium in Huntington, W.Va.

Sholten Singer/The Herald-Dispatch Marshall's Talik Keaton (9) looks for running room as he returns a punt against VMI in an NCAA football game on Saturday, Aug. 31, 2019, at Joan C. Edwards Stadium in Huntington, W.Va.

HUNTINGTON - Marshall's 2019 season got off to a successful start Saturday night as the Thundering Herd used a balanced offensive attack to top VMI 56-17 in front of 23,875 fans at Joan C. Edwards Stadium.

The win was the 15th consecutive for Marshall over VMI, a member of the Southern Conference. Marshall rolled up 620 yards of total offense with success both rushing and passing the ball and getting multiple players involved. It was the first time the Herd eclipsed 600 yards of offense since gaining 630 against Charlotte on Oct. 15, 2015.

Head coach Doc Holliday's vision is already toward Boise State, who the Herd plays at 9 p.m. Friday in a nationally televised contest on ESPN2.

"We've just got to get better," Holliday said after Saturday's game. "We've got a quick turnaround. I told those guys in the locker room that tomorrow is Monday. Believe it or not, three days from now, we're on a plane to Boise."

"We started a little slow on offense, but once we got it rolling, it was easy to keep that momentum," Green said.

Marshall put the game away with a 1-yard touchdown run by Knox on the final play of the first half that gave the Herd a 35-7 lead at the break.

While the Herd was happy with the advantage, there was cause for concern after a pair of first-half injuries. Prior to Knox's scoring run, Green left the field after a helmet-to-helmet hit in which his head hit the turf; the play resulted in a targeting call and ejection of VMI safety Josh Sarratt. Green, however, returned to play after being cleared at halftime.

Marshall was not as lucky with one of its linebackers as Jaquan Yulee was taken off on a stretcher near the end of the first quarter following a hit on VMI tight end Jakob Harris, who also stayed down for a while after the play.

As medical personnel tended to Yulee, Marshall's team huddled around him to pray, along with VMI's Tyain Smith and Charles Dixon, who are from the same high school - Indian River in Chesapeake, Virginia - as Yulee and Marshall's Tavante Beckett.

"It hit home to me because I knew how much he wanted it and how much he worked for it," Marshall safety Nazeeh Johnson said. "This win's for him."

In less than one quarter, Yulee had six tackles, including 1.5 tackles for loss and a half-sack. Marshall jumped to a 14-0 lead after scoring a pair of touchdowns in less than 90 seconds. Green led Marshall's offense to a strong first-half performance with touchdown tosses of 29 yards to Willie Johnson, 51 yards to Artie Henry and four yards to Xavier Gaines. He also connected with eight different receivers in the first half, with five having multiple catches.

Marshall finished the game with 11 different receivers catching a pass.

After Green connected with Johnson on the 29-yard touchdown pass to open the scoring, Talik Keaton fielded a punt and raced 67 yards for a score, marking the Herd's first punt return for a touchdown since Deandre Reaves against FIU in 2015.

"It was the greatest feeling ever," Keaton said. "When I caught the ball, I seen everyone flowing in to me and I bounced out. I just saw green grass and it was the best feeling when I got into the end zone."

To begin the second half, Green ran one drive that he capped with a 33-yard touchdown pass to Corey Gammage.

Green finished 18 of 28 for 238 yards and the four scores with one interception. Gammage had five catches for 82 yards in his first game.

VMI got its lone first-half score when Reece Udinski found Javeon Lara for a 50-yard touchdown after a busted coverage by the Herd secondary. Udinski finished 20 of 35 for 192 yards. True freshman quarterback Seth Morgan added a 4-yard rushing score in the fourth quarter.