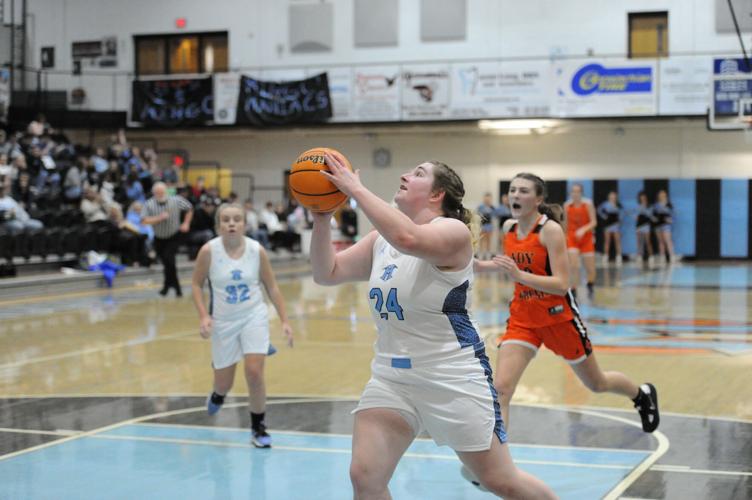 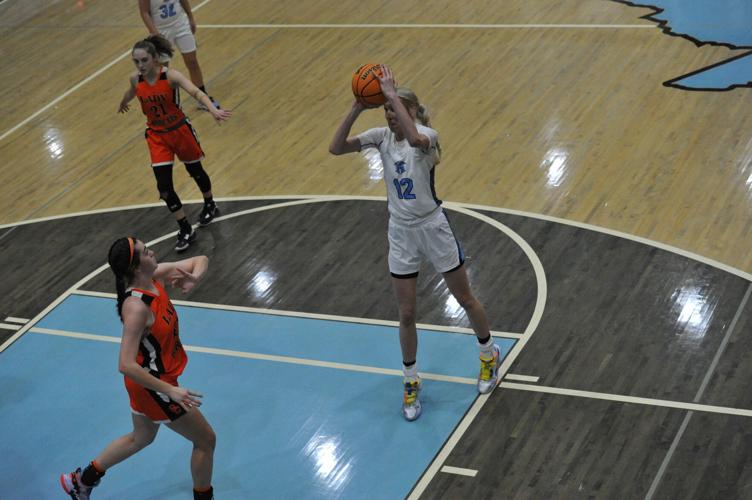 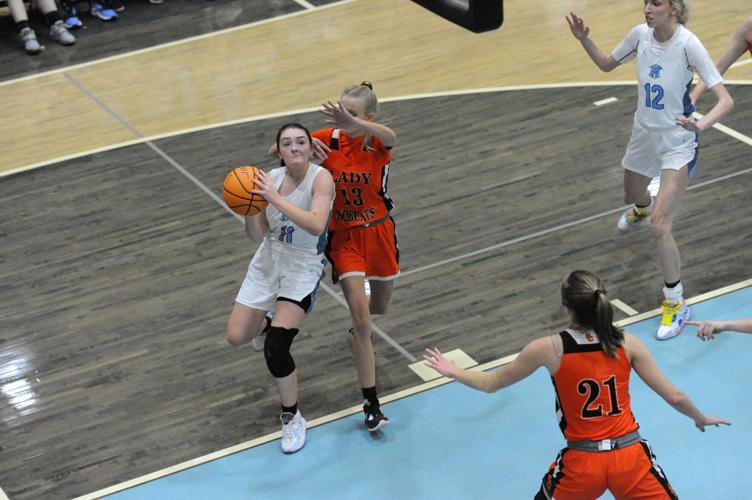 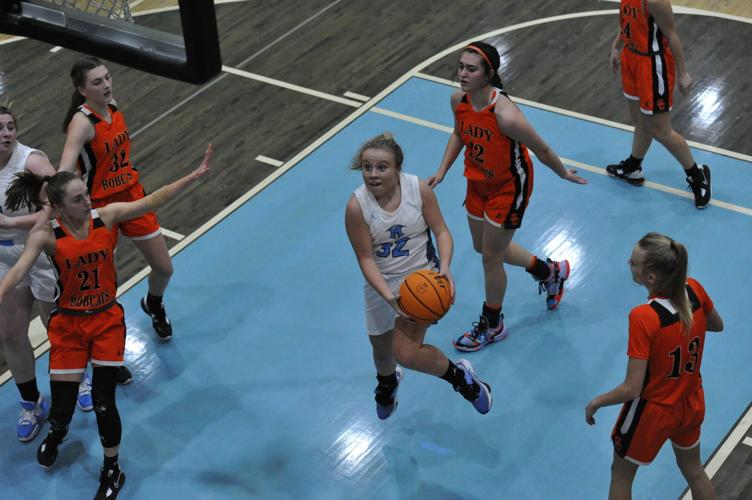 Mingo Central’s Addie Smith hangs in air to shoot a layup during the Lady Miners 49-39 win over Summers County on Saturday, Jan. 21. 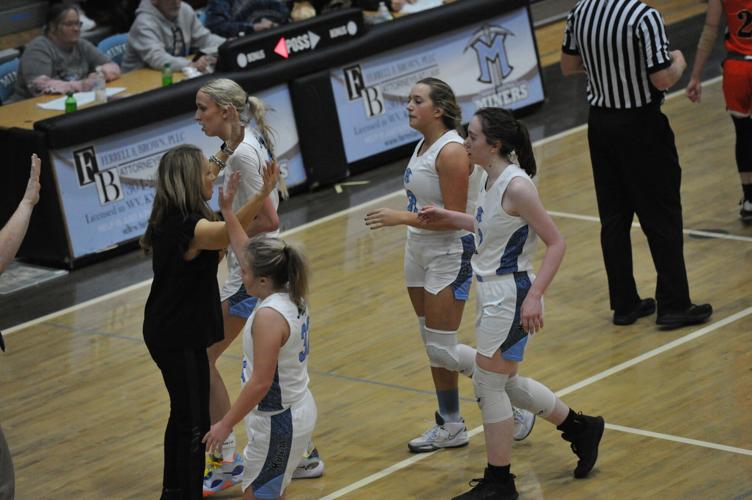 Mingo Central’s Addie Smith hangs in air to shoot a layup during the Lady Miners 49-39 win over Summers County on Saturday, Jan. 21.

NEWTOWN — No. 2 ranked Mingo Central earned another win over a top-ranked team on Saturday night as they pulled away in the second half to beat No. 3 Summers County by a final of 49-39.

Mingo sophomore guard Addie Smith led the Lady Miners to the win as she torched the nets for 28 points, 23 of which came in the second half.

“She’s a great player, she was a First Team All-State guard as a freshman and is a First Team All-State guard this year,” Summers County coach Chad Meador said of Smith. “She’s led them to victory 12 times now and she’s a hard guard. I thought we did pretty good for three quarters, but we got tired, obviously we don’t play very many. Hats off to them.”

Summers County held the lead early on in the game as they were on top 10-9 after the first quarter of action and led 18-16 going into the half.

Mingo took a 22-21 lead on a layup by Smith midway through the third and pushed that lead to 26-21 after a pair of free-throws by Madisyn Curry.

The Lady Bobcats responded with an 8-0 run to retake the lead at 29-26 after a three by Sullivan Pivont, one of seven made treys for her on the night. Mingo had an answer as Smith sank a trey next time down the floor to knot the game up and then a Jenna Sparks free throw gave the Miners a 30-29 lead going into the fourth.

The fourth quarter was all Mingo Central as Smith started the stanza off with back-to-back triples and then hit Sparks on a pretty pick-and-roll and the Miners took a 38-29 lead with 5:09 to play.

Smith connected on two more three-pointers in the fourth quarter and went 4-4 at the line as she had a 16-point final period to seal the win for the Lady Miners.

“The past couple of games Addie has not shot very well,” Davis Smith said. “Tonight she was able to get on a roll and kind of carried us there. But the great thing about that is she doesn’t have to do that night in and night out. We do have the ability to be very well balanced, but Tonight she just happened to get on a good run and carry the team.”

Sparks and Curry each scored seven points in the win for Mingo Central and controlled the paint as Sparks yanked down nine rebounds and Curry grabbed seven while both blocked two shots.

Pivont led the way for Summers County in the loss with 25 points as she couldn’t miss from deep.

“Summers County is a great team. Coach (Chad) Meador is a great coach and he coaches his team extremely well,” coach Davis Smith said. “They have returning players that have improved their game. You couple that with coach Meadors ability to scout and gameplan, and it is really a good win for us.”

The game was a rematch of the last two Region 3 Co-Finals as Mingo Central and Summers County have faced-off for a berth in the Class AA State Tournament the past two seasons.

Mingo Central beat Summers 48-39 to make their first ever state tourney in 2021 but the Lady Bobcats knocked off MCHS at Miner Mountain last season 50-36 to keep them from making it back to Charleston.

While the two teams are scheduled to play again on Feb. 11 in Hinton, both coaches acknowledged that a third matchup could be in the cards in the postseason.

“Region 3 is loaded,” Davis Smith said. “It’s tough, I mean it really is. There are four teams that could make the state tournament, and all have the potential to play for a title. But only two of them are going to get to go. We will be playing Summers one more time and then potentially could see them again in the Region as well.”

Region 3 currently boasts the top three teams in the state in the Class AA AP Poll in Wyoming East (No. 1), Mingo Central (No. 2), and Summers County (No.3) while Chapmanville is ranked at No. 8 and had previously been ranked higher.

Region 3 is loaded,” Meador said. “I think the top four teams are in our Region and only two get to come out. That’s why we play the games.”

Mingo Central improved to 12-1 on the season with the win which is their best start in school history while Summers County fell to 11-4 with the loss.

The Lady Miners were scheduled to host Class AAA Lincoln County on Monday night before traveling to play Class AA No. 10 Charleston Catholic on Thursday. MCHS will close out the week back at home on Saturday night against Class A No. 7 Tolsia for Senior Night.