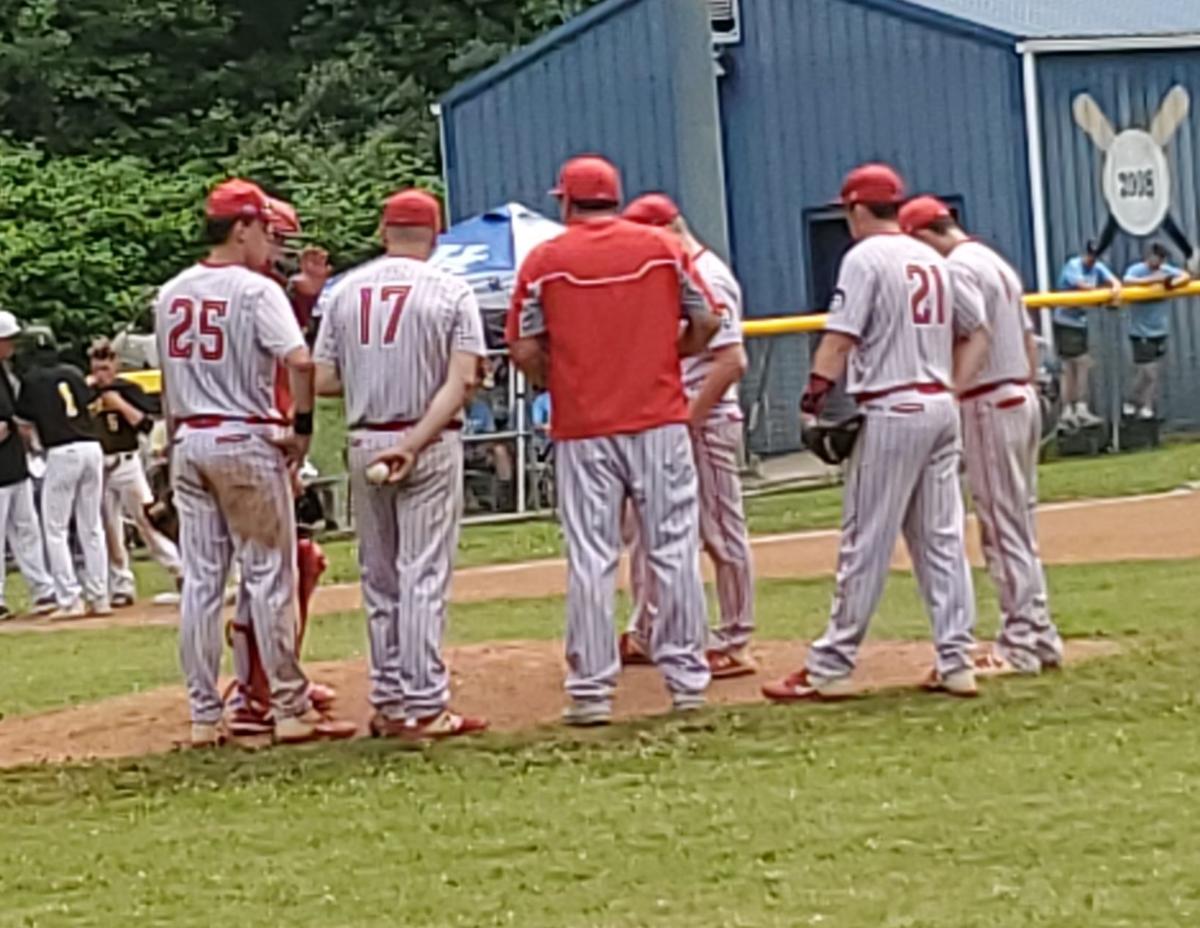 Belfry head coach Michael Hagy talks with his team during the first inning of the Pirates 7-4 loss to Johnson Central in the 15th Region Tournament semifinals on Sunday, June 6, 2021 at East Ridge High School. 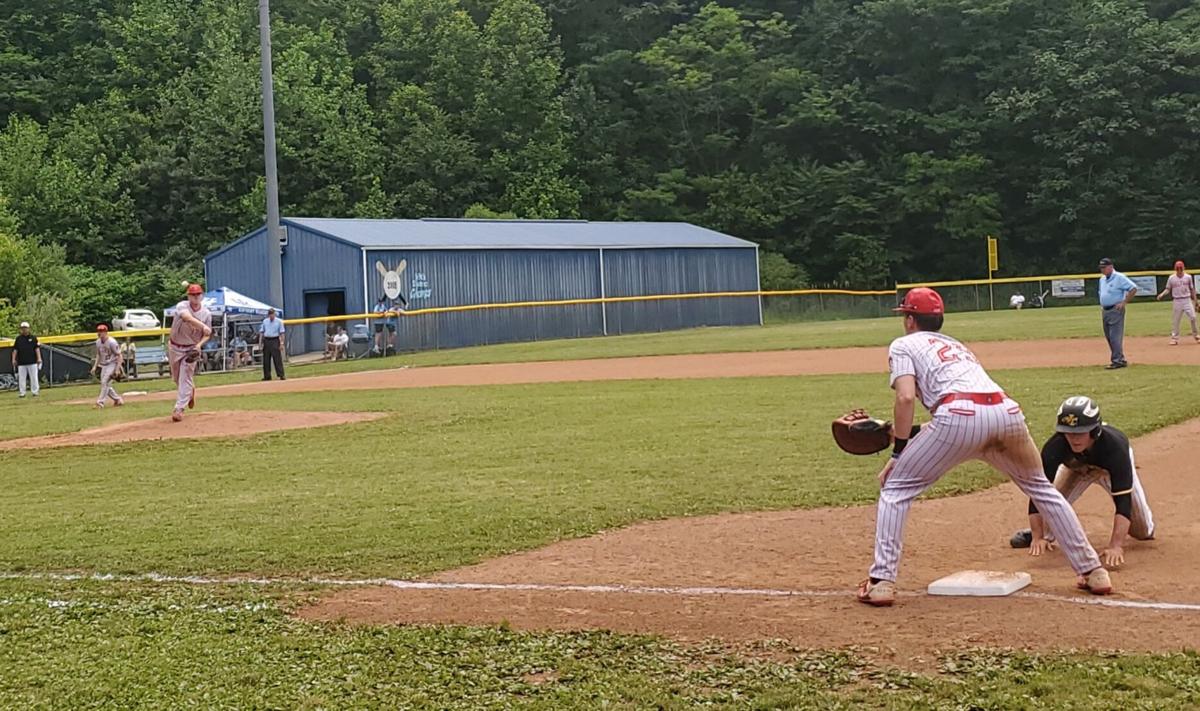 Belfry head coach Michael Hagy talks with his team during the first inning of the Pirates 7-4 loss to Johnson Central in the 15th Region Tournament semifinals on Sunday, June 6, 2021 at East Ridge High School.

LICK CREEK, Ky. — The Belfry Pirates were only four outs away from advancing to the 15th Region Championship game for the first time since 2013 on Sunday against Johnson Central but a defensive miscue allowed the Golden Eagles to plate four unearned runs in the bottom of the sixth inning and come away with the 7-4 win.

The Pirates (23-12) were ahead 4-3 in the bottom of the 6th inning with two outs in the inning and only one runner on base.

The inning looked to be over as pitcher Parker Hall got two-hitter Chandler Spradlin to hit a weak grounder to third base but three bagger Devin Jude’s throw across the diamond was a tad high causing first baseman Steven Banks to pull his foot off the bag which allowed a hustling Spradlin to reach safely and keep the inning alive.

The Golden Eagles took advantage of a second Pirate mistake to tie the game as during the next at-bat a ball got by catcher Isaiah Stanley allowing Josh Slone to scurry home and score the games tying run.

With the contest knotted up at four apiece, Belfry still had two outs in the inning and looked to get out of the jam with the game tied. Three-hitter Ryan Sartin-Slone came up huge for Johnson Central as he delivered a hard hit single to center field to score Spradlin and give his team the 5-4 lead.

After a base hit by Conner Lemaster, the Eagles took advantage of another Belfry miscue which allowed both Sartin-Slone and Lemaster to score as they took the 7-4 lead which would be the final score.

Johnson Central got on the board in the bottom of the first inning as they plated three runs, with the first coming on a sacrifice fly off the bat of Lemaster.

Johnson Central seemingly benefited from a questionable call two score their next two runs DH Mason Kestner came up next and ripped a ball down the third base line past a diving Jude. Jude came up pointing that the ball was foul but the third base umpire called it fair which brought the Belfry faithful to an uproar as JC took a 3-0 lead.

Coach Michael Hagy’s club benefited from a pair of errors in the top half of the third inning as Steven Banks and Jake Varney were able to reach on an error. Later in the inning the Pirates broke through as sophomore Noah Brown delivered a clutch two-out single to left center to cut the JC lead to 3-2.

JC gifted Belfry another pair of runs in the top of the fourth as the centerfielder dropped a fly ball allowing Stanley to reach and then Ashton Deskins was hit by a pitch to place two runners on base.

With runners on second and third and no out, JC played the infield in as Gage Fields slapped a grounder to the shortstop and was able to reach safe as JC first baseman Keagan Pelphrey wiffed on the ball. \

As Pelphrey tried to chase down the loose ball he pushed Fields out the way which drew an obstruction call from the umpire which allowed courtesy runner Chase Justice to come home and knot the game up at three.

Later in the inning, BHS took their first lead of the game at 4-3 as Deskins sprinted home following a wild pitch which brought the Pirate faithful to their feet.

Junior Parker Hall took the loss for Belfry on the mound as he was tagged with the four unearned runs in the sixth inning. He came in during the second inning and fired four straight shutout innings to keep Belfry in the game and struck out six batters.

Ashton Deskins started the game and pitched the first inning allowing three runs on one hit as he walked two batters and hit one.

Belfry only mustered three hits offensively on the day as Brown paced the attack going 2-3 with a double and two RBIs. Steven Banks had the only other hit, a single in the third for the Pirates.

With the loss the Pirates saw their season come to an end with a record of 23-12.

The Pirates picked up a win in the first round of the 15th Region Tournament as they overcame a low start and knocked off Shelby Valley by a score of 9-4.

Wyatt Webb got the win as he started and went four innings allowing three runs on three hits with five K’s and three walks. Noah Brown picked up the save pitching 2.2 innings of one hit ball while striking out four batters.

Devin Jude paced Belfry offensively as he went 2-2 with two walks, a double, and three runs scored. Gage Fields and Isaiah Stanley each had an RBI double while Steven Banks knocked in two runs with a single. Jonathan Banks added two walks, two runs, and a RBI.