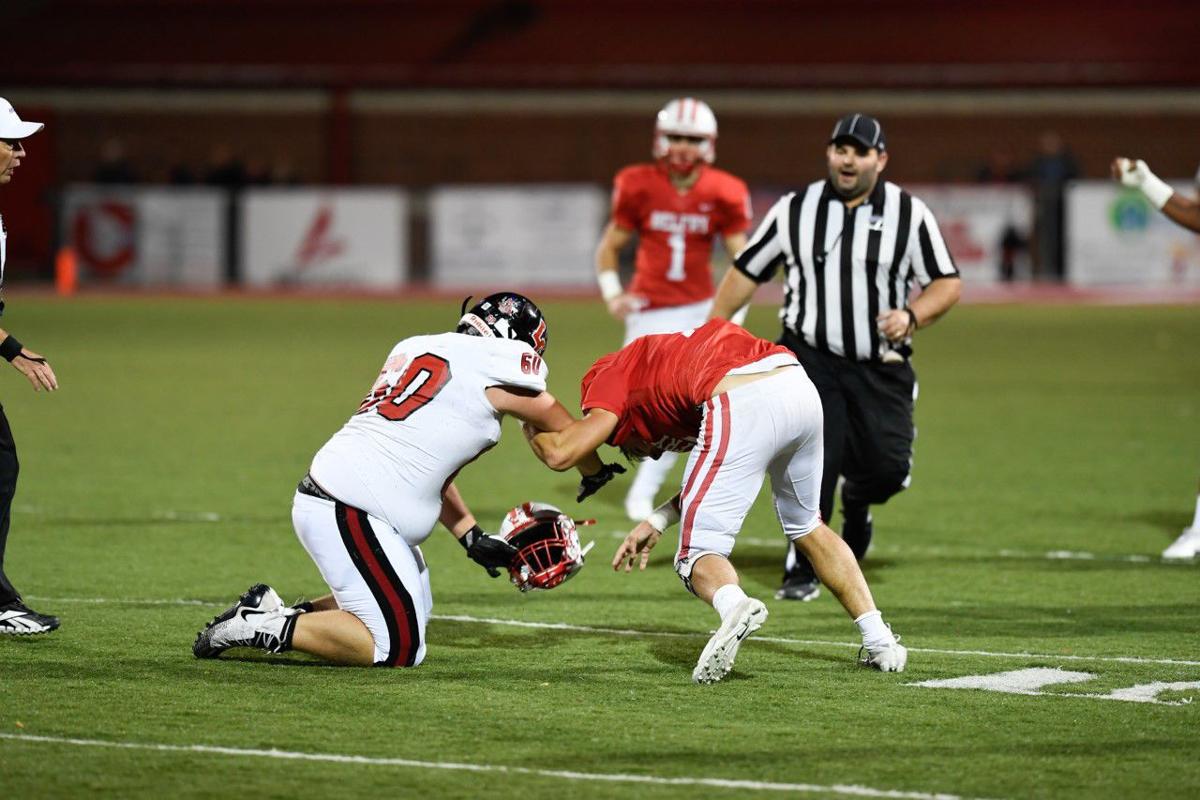 Belfry linebacker Seth Mounts has his helmet ripped off by Lawrence County senior lineman Bradley Osborne during the Pirates’ 48-0 win over Lawrence County on Friday in the ARH Battle of the Mountains Bowl held at CAM Stadium. 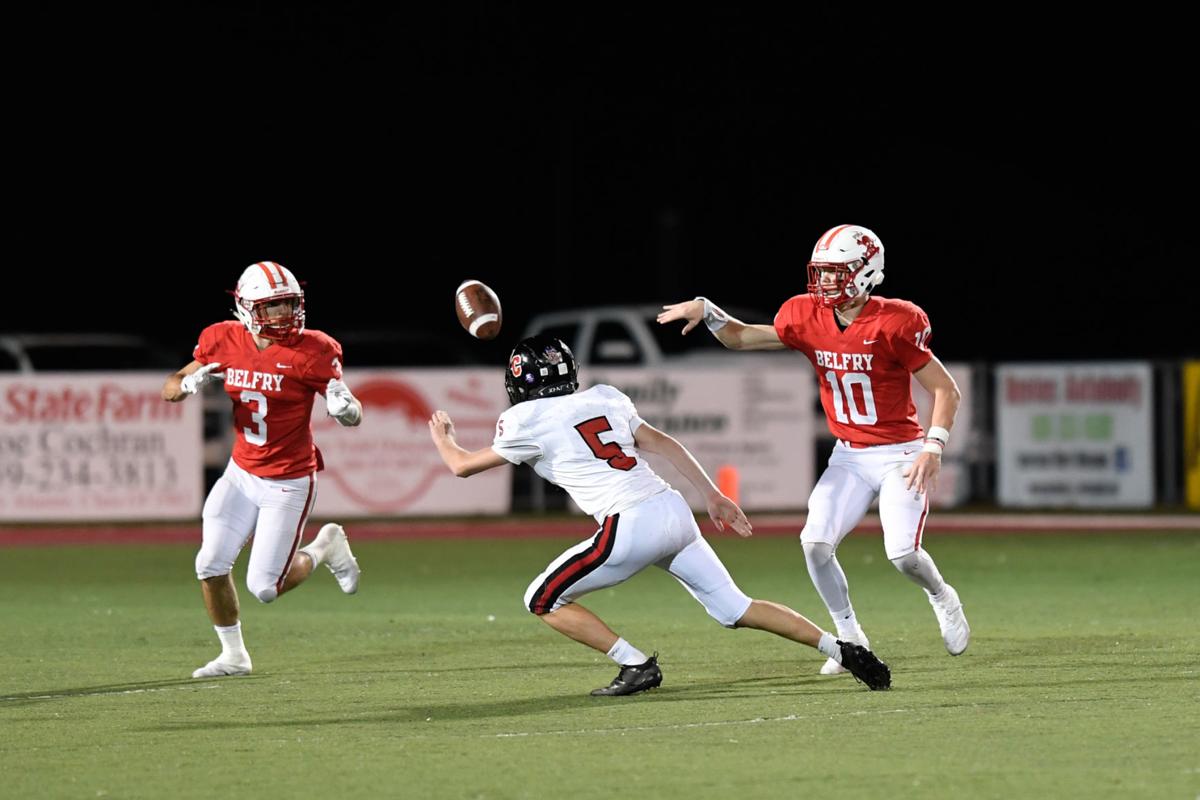 Belfry quarterback Brett Coleman (10) pitches the ball to junior running back Isaac Dixon during the Pirates 48-0 win over Lawrence County on Friday in the ARH Battle of the Mountains Bowl held at CAM Stadium.

Belfry linebacker Seth Mounts has his helmet ripped off by Lawrence County senior lineman Bradley Osborne during the Pirates’ 48-0 win over Lawrence County on Friday in the ARH Battle of the Mountains Bowl held at CAM Stadium.

Belfry quarterback Brett Coleman (10) pitches the ball to junior running back Isaac Dixon during the Pirates 48-0 win over Lawrence County on Friday in the ARH Battle of the Mountains Bowl held at CAM Stadium.

GOODY, Ky. — The Belfry Pirates came out of their second bye week in a big way on Friday night as they won their 20th consecutive game over district foe Lawrence County to the tune of a 48-0 win in the ARH Battle of the Mountains Bowl played at CAM Stadium.

“I thought we played pretty well tonight,” Belfry coach Philip Haywood said following the win. “I could tell to a certain extent that we didn’t play the week before, but at the same time I thought we played better and I thought we would coming in. I think we are a better team now than we were a couple of weeks ago.”

The Pirates (5-2) forced a three and out on the first Bulldog drive and then quickly moved the ball down the field thanks to two long runs by Peyton Hensley and Isaac Dixon.

On a first and goal from the 2-yard line, senior running back Ben Bentley powered his way into the endzone with only 9:15 to go in the first quarter.

Grayson’s Cook PAT was good, and the Pirates took the 7-0 lead.

On the next LC drive, the Bulldogs (3-4) tried to catch the Pirates off-guard and called a play-action pass but Bentley was not fooled and picked off the pass at the Belfry 49-yard line.

After a fumble by Belfry gave the ball back to LCHS, the Pirate defense made another play and forced the second turnover of the first quarter as Grayson Cook recovered a Bulldog fumble to give the Pirates the ball at the 33-yard line.

Belfry wasted no time finding the endzone as Hensley broke free on the first play from scrimmage and went 67-yards untouched.

Cook’s PAT spit the uprights and the Pirates took the 14-0 lead with 4:38 left in the first.

After the vaunted Big Red defense forced another three and out on the next Lawrence County drive, the Pirates got the ball back and produced another scoring drive capped off by a 14-yard run from quarterback Brett Coleman with 47.5 seconds to go in the first. Cook’s PAT was good once again and Belfry took the 21-0 lead.

Following the third Bulldog punt of the first half, the Pirates grinded their way down the field and hit pay dirt for the fourth time as Hensley scored from 2 yards out and the Pirates took a 28-0 lead with 9:19 to go in the half.

Tempers flared on the next Bulldog possession as on back-to-back plays Lawrence County senior lineman Bradley Osborne and Belfry junior linebacker Seth Mounts engaged in some pushing and shoving after the play.

During the second altercation, Mounts had his helmet ripped off by Osborne while the two were engaged which led to a brief scrum near mid-field involving both teams.

Coaches and referees were able to break up the altercation rather quickly and the game was delayed for around 10 minutes while officials sorted out the situation.

Eventually they decided to eject both Mounts and Osborne from the game.

Coach Haywood, who is coaching in his 45th season overall and 36th at Belfry, was visibly upset with the officials during the stoppage.

Mounts, who was the Pirates second leading tackler coming in will also have to sit out next week’s game.

Once action resumed, a fired-up Belfry defense stopped Lawrence County on fourth and 9 to force a turnover on downs.

The Pirates once again mounted a long drive and ate up the clock as they ran 11 plays and found the endzone on a 2-yard run from Coleman with 45.3 left to play in the half. Belfry elected to go for two to try and set up the running clock, but Coleman was stopped on the keeper as the score read 34-0 going into the halftime locker room.

The Pirates wasted no time in getting the running clock in the second half as junior running back Isaac Dixon, who was playing in his first game back after missing multiple weeks with an ankle injury, took the opening kickoff 84-yards untouched down the sideline for the Belfry score. Cook’s PAT was good, and the Pirates took the 41-0 lead with 11:48 still left to play in the third.

Belfry would add one more score late in the third quarter with their second-string offense as junior Chris Warren barreled in from 3 yards out. Sophomore Gideon Ireson’s PAT was good to set up the final score of 48-0.

“We’re starting to get our players back, we’re not 100 percent and I don’t know if we ever will be this year but that’s kind of the way it goes sometimes,” Haywood said. “But these guys have a way of kind of taking up the slack for each other. And I’m just real proud of them and the way they have kind of fought through some adversity and stuck with each other. We’ve just got to stick with our philosophy of getting a little better each week. “

The Belfry defense played lights out from the opening snap as they held the Lawrence County offense to just 47 total yards of offense on 34 plays. The front seven that consist of seniors Grayson Cook, Jonathan Stepp, Jacob Baisden, Mason Washington and John Ashurst was in tune all night long clogging all the LCHS running lanes.

Offensively the Pirates moved the ball at will as they gained 408 yards, all on the ground, on 47 total plays. Hensley, who was named the MVP of the game by ARH, led the Pirates in rushing as he ran the ball 11 times for 153 yards and two scores.

Dixon also topped the 100-yard mark in his first game since early September as he ran nine times for 105-yards from the line of scrimmage and returned the kickoff 84-yards to start the second half.

“Isaac looked like he hadn’t played in about a month, but he still looked pretty good,” coach Haywood said of his explosive junior. “We’re just glad to have him back out there.”

Coleman added four rushes for 26-yards and two more scores while Bentley ran the ball five times for 35-yards and a touchdown, while also picking off a pass on the defensive side of the ball.

A staple of backs received carries late in the game as a total of 10 players ran the ball for Belfry, with Warren adding 23 yards on three carries and the final score.

With the win Belfry improves to 5-2 on the season and 3-0 in district play.

They are back in action on Friday night in another important district game against Pike Central who will enter play also with a 3-0 record in district play and a 7-1 record overall.

The Pirates have dominated the all-time series against the Hawks as they have won every match-up, going 27-0 against them dating back to 1994. Kickoff is scheduled for 7:30 p.m. at the Hawks Nest.