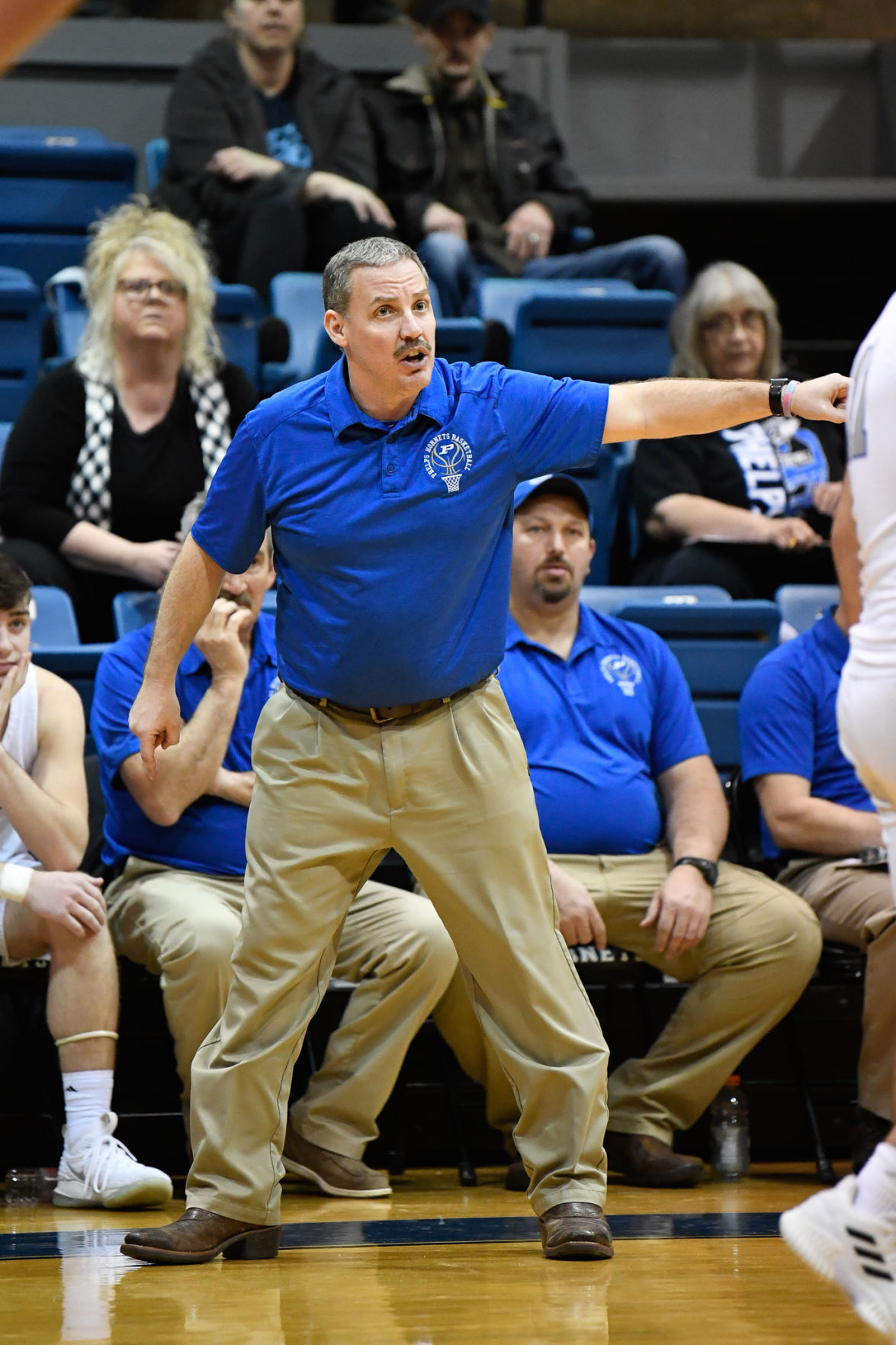 Phelps head coach Jason Sanson barks out orders during the Hornets 71-56 win over Belfry on Feb. 7 inside the McCoy Athletic Center.

Phelps head coach Jason Sanson barks out orders during the Hornets 71-56 win over Belfry on Feb. 7 inside the McCoy Athletic Center.

PHELPS, Ky. — The Phelps Hornets and the Belfry Pirates met up on the hardwood for the first time in the 2019-20 season this past Friday night at the McCoy Athletic Center and it was the Hornets who came away with a 71-56 win.

The two teams went toe-to-toe in the first eight minutes of play as it was the Pirates who held a one point lead at 15-14 going into the second quarter.

The second stanza was where coach Jason Sanson’s club would take control of the game however as they topped Belfry 20-10 in the quarter to take a nine point lead into the break at 34-25.

Coming out of the halftime locker rooms it was coach Mark Thompson and the Pirates who would quickly grab the momentum and claw their way back into the game, as they trimmed the Phelps lead to three at 47-44 going into the fourth.

The final eight minutes of play were all blue-and-white however as Phelps dominated the fourth quarter outscoring Belfry 24-12 to secure the 15-point win.

Senior guard Trey Francis was the high man in the game as she scored 22 points to lead the Hornets while also recorded a double-double by grabbing 12 rebounds.

Junior guard Dominick Francis was right behind him and nearly recorded his own double-double as he scored 20 points and snatched down nine boards.

Guard Cameron Sanson joined them in double-figures with 10 points, Seth Mayhorn followed with seven, while Landon Dotson and Jason Casey rounded out the scoring with six apiece.

The Pirates were led by junior Brett Coleman who dropped in a team high 18 points while also leading the way with eight rebounds. Senior Caleb Spears joined him in double-figures with 11 while Tyler Chaffin followed with nine and freshman guard Sal Dean finished with eight points while also dishing six assists.

The loss for Belfry sees their season record dip to 7-12 and was their first game in district play as they fell to 0-1. After starting the season off at an impressive 6-2, the Pirates have since lost 10 of 11 games.

BHS was back in action last night in another district game against Pike Central and will host the Hornets for their rematch on Thursday. Tip-off for that game is set for 7:30 p.m. The Pirates then play road games at Betsy Layne and Henry Clay on Friday and Saturday.

The win for Phelps improves them to 15-10 on the year as they have now won five consecutive games. Phelps was also back in action on Monday against Letcher County but scores and stats were not available by press time.