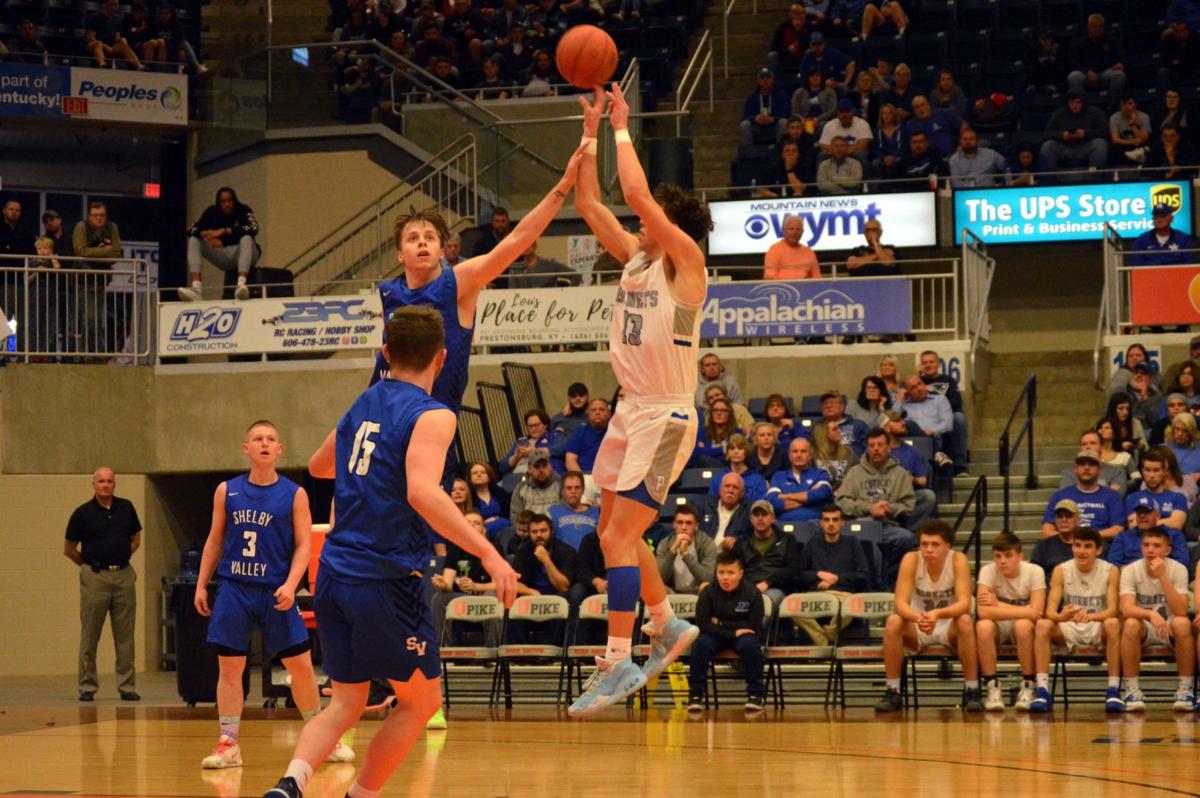 Phelps senior Trey Francis is hit on the arm as he shoots a turn-around jumper in the second half of their 69-53 loss to Shelby Valley in the opening round of the 15th Region Tournament on March 5 at Appalachian Wireless Arena in Pikeville, Ky. 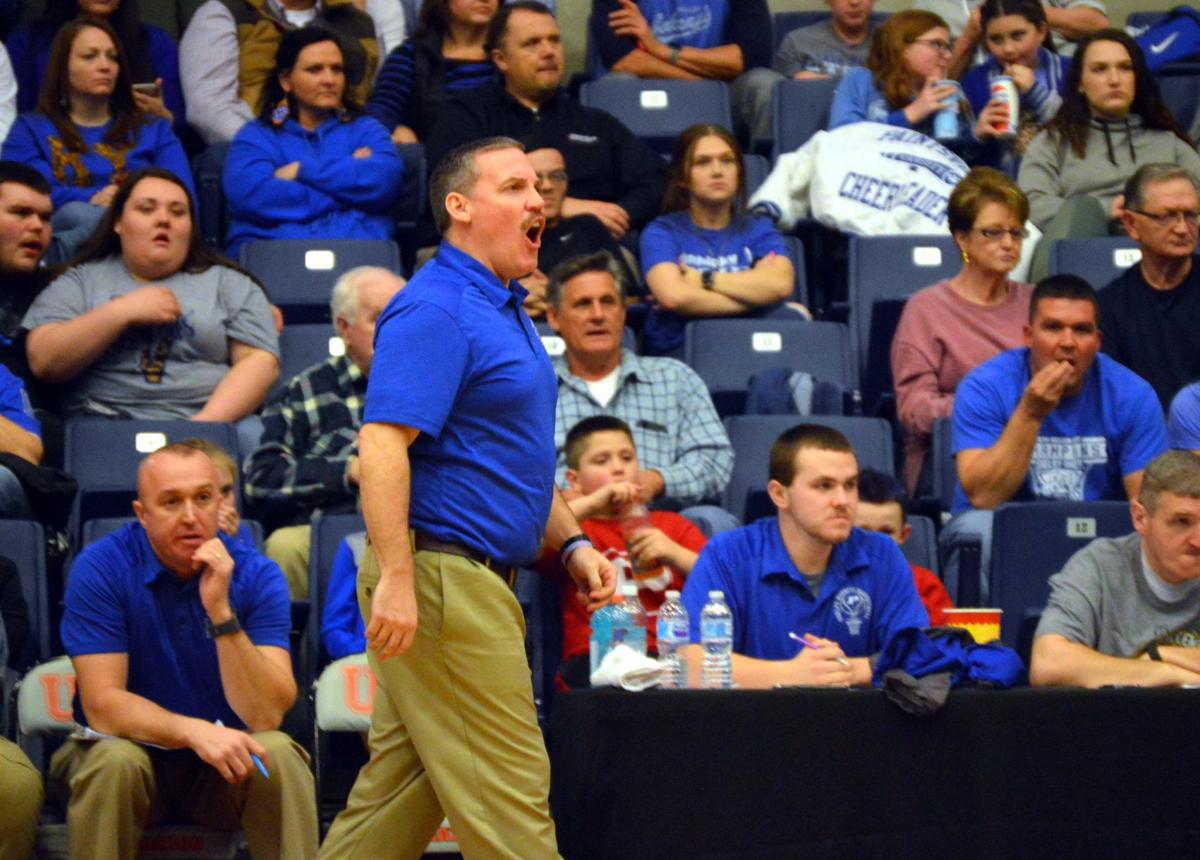 Jarrid McCormick/Williamson Daily News Phelps head coach Jason Sanson directs orders to his team during their 69-53 loss to Shelby Valley in the opening round of the 15th Region Tournament on Thursday, March 5, 2020 at Appalachian Wireless Arena in Pikeville, Ky.

Phelps senior Trey Francis is hit on the arm as he shoots a turn-around jumper in the second half of their 69-53 loss to Shelby Valley in the opening round of the 15th Region Tournament on March 5 at Appalachian Wireless Arena in Pikeville, Ky.

Jarrid McCormick/Williamson Daily News Phelps head coach Jason Sanson directs orders to his team during their 69-53 loss to Shelby Valley in the opening round of the 15th Region Tournament on Thursday, March 5, 2020 at Appalachian Wireless Arena in Pikeville, Ky.

PIKEVILLE, Ky. — The Phelps Hornets and head coach Jason Sanson postseason dream came to an end on Thursday night in the opening round of the 15th Region Tournament at Appalachian Wireless Arena as they fell to Shelby Valley by a final of 69-53.

The Hornets (21-11) came out hot to start the game as they jumped ahead to a quick 5-2 lead, with all five five points from senior play-maker Trey Francis.

The Wildcats (25-7) got a bucket from Elijah Sykes to trim the Phelps lead to 5-4, but senior Jason Casey rattled off five points of his own and the Hornets took what would be their largest lead of the game at 10-4 midway through the first quarter, prompting a timeout from SV coach Jim Hicks.

Valley responded and ended the stanza on an 8-4 run, but Phelps stlil held onto the lead at the end of one at 14-12.

The Wildcats carried that momentum into the second frame as they battled back to take their first lead of the game and then extended it to as much as seven at 30-23 late in the second quarter.

The blue-and-white Hornets made a run before the end of the half however as they got back-to-back threes from Casey and senior Cameron Johnson to cut the Wildcat lead to 30-29 with 50 seconds to go in the half.

SV guard Russ Osborne got a floater to go before the final horn to end the first half, as Valley took the 32-29 lead into the halftime locker room.

Coming out to start the second half both teams were cold from the floor, but Valley was able to 5-0 run to extend their advantage to eight at 37-29 with 4:21 to go in the third, prompting a timeout from coach Sanson to settle his troops.

The timeout paid dividends as the Hornets went on a 9-2 run in the final four minutes of the quarter and trimmed the Shelby Valley lead to only one at 39-38 going into fourth following a nifty and-one from junior Dom Francis.

Phelps carried their momentum over into the final period as Trey Francis sank a free throw to tie the game up at 39, and then sank a driving shot in the lane to give the Hornets the lead at 41-39 with 6:40 to go in the game.

From this point on it would be all Shelby Valley, as the Wildcats outscored Phelps by a whopping 30-12 in the final six minutes of action as they ended the Hornets season for the second year in a row.

Trey Francis had a monster game ended in his final time donning a Phelps uniform as he finished with a double-double scoring a game high 27 points on 9-14 shooting and yanking down 14 rebounds.

Francis, who also topped the 2,000 point plateau during the game, finished the season as the Phelps leading scorer putting up 18.4 points per game while also being one of the top rebounders in the state grabbing 12.7 boards per game.

Dom Francis joined him in double-figures with 11 points while Casey added nine before twisting his ankle in the third quarter which caused him to miss most of the final action.

Johnson finished the game with three points while Landon Dotson scored two and Cameron Sanson tallied a point to round out the scoring for the Hornets.

Potter led Valley with 24 points on the night including 11-15 from the foul line while Keian Worrix was right behind him finishing with 22.

With the loss the Hornets saw their season come to an end with a 21-11 record. They will be hit hard by graduation as they will lose three out of their top four scorers, including Trey Francis.

The seniors left their mark on the Phelps program however as they won back-to-back 60th District Championships in 2019 and again in 2020 for the first time in school history.