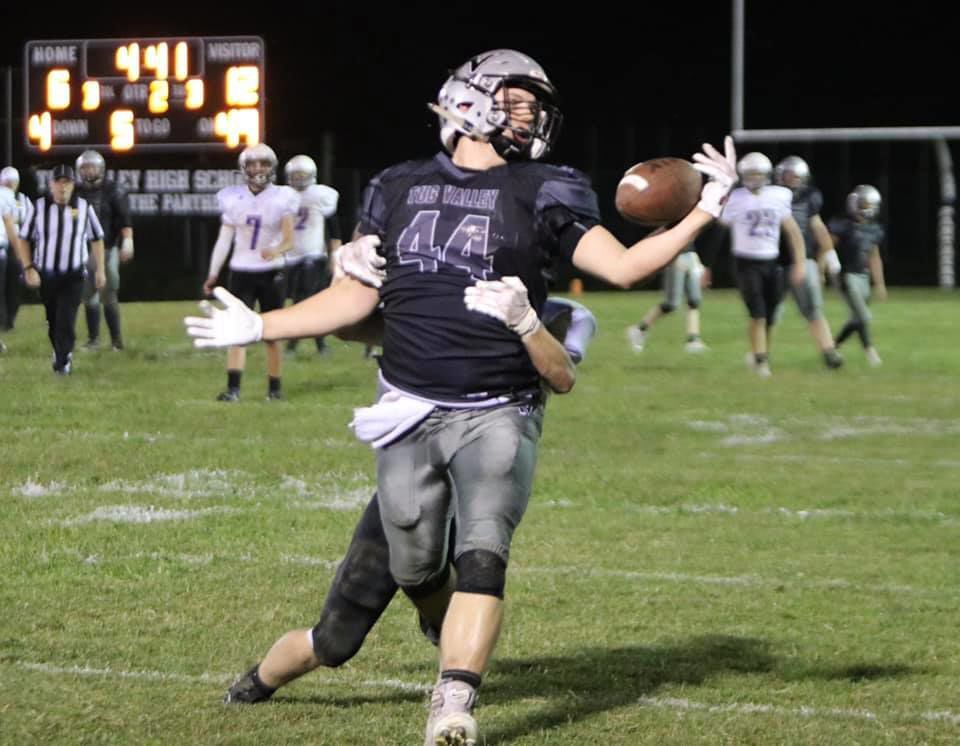 Tug Valley junior wide receiver/tight end Ethan Colegrove makes a one-handed circus catch during the first half of the Panthers 38-32 come from behind win against James Monroe on Friday at Bob Brewer Stadium. 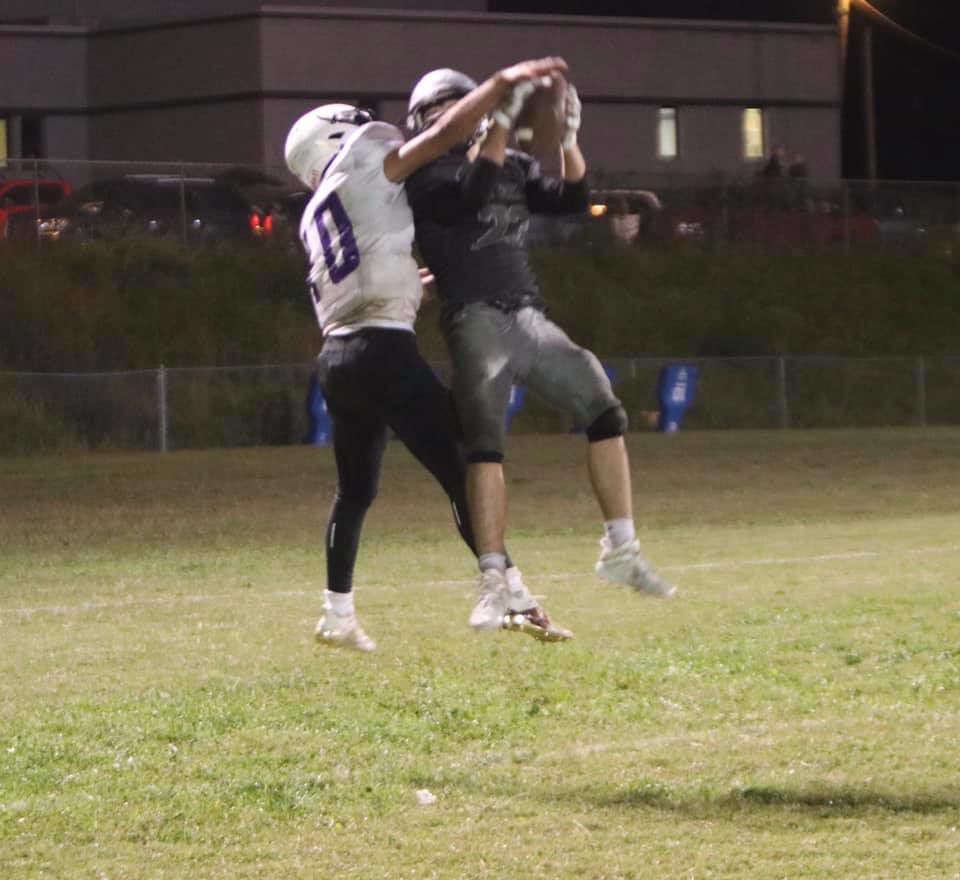 Tug Valley star wideout Caleb May goes high above a James Monroe defender for a TD grab during the first half of the Panthers 38-32 come from behind win against the Mavericks on Friday at Bob Brewer Stadium.

Tug Valley junior wide receiver/tight end Ethan Colegrove makes a one-handed circus catch during the first half of the Panthers 38-32 come from behind win against James Monroe on Friday at Bob Brewer Stadium.

Tug Valley star wideout Caleb May goes high above a James Monroe defender for a TD grab during the first half of the Panthers 38-32 come from behind win against the Mavericks on Friday at Bob Brewer Stadium.

NAUGATUCK — The Tug Valley Panthers were able to overcome seven turnovers in a rare Tuesday night game at Bob Brewer Stadium in Naugatuck last week and come from behind to defeat James Monroe by a final score of 38-32.

The Panthers and head coach Hady Ford improved to 3-0 on the 2020 season with the win, but got bad news the following day when Mingo County Schools and the MCHD announced a TVHS student and player on the football team had tested positive for COVID-19.

Tug Valley’s game scheduled for last Friday against Trinity out of Morgantown was then cancelled as the entire TVHS football team and coaching staff was required to undergo a two-week quarantine.

The Panthers will not be able to resume football activity until Wednesday, Oct. 21.

In the game on Oct. 6 against former Class AA power James Monroe, Tug Valley played from behind nearly the entire contest as they battled costly turnovers.

The Panthers committed three turnovers in the first half to allow the visiting Mavericks to jump ahead to a 20-6 lead early in the second quarter.

TVHS trimmed into the lead prior to the end of the first half however as All-State receiver Caleb May “Mossed” a James Monroe defender in the end zone on a pass from QB Joby Sorrell from 27-yards out for his second TD of the half to cut the lead to 20-14 going into the break.

Coming out of the locker rooms, the Mavericks reached the end zone again following another Tug Valley turnover as QB Andrew Hazelwood ran it in from 20-yards out and extended the JM lead to 26-14.

The silver-and-black wasted no time answering on their next drive as Sorrell once again looked May’s way and the seniors hooked up on a 19-yard scoring pass. The two-point try was no good but the Maverick lead was trimmed back to six at 26-20.

After the Tug Valley defense forced a turnover on downs by James Monroe, they looked to claw away at the lead again as junior Jarrett Barker got involed in the passing game.

Barker hauled in passes good for 20 and 23 yards and then capped off the drive as he hauled in a two-yard pass from Sorrell and waltzed into the end zone. The two-point try was once again no good but the game was knotted back up at 26 apiece.

The Tug Valley defense then found their stride as they forced a turnover on downs, picked off a pass, and forced a punt on the next three James Monroe possessions.

The Panther offense sputtered on their side of the ball however as they committed turnovers on three straight offensive possessions late in the third and early in the fourth quarter.

The James Monroe offense finally regained its traction late in the fourth quarter as they mounted an eight play drive capped off by a TD on 2nd and goal from the 22 as Hazelwood lofted a pass up for running back Grant Lively who hauled it in between three Panther defenders for the score.

James Monroe’s two-point try was unsuccessful however but the Mavs took the 32-26 lead with 4:35 left in the game.

Now trailing again by six with time winding down, the Tug Valley offense took over at their own 46-yard line needing to find the end zone.

Panther QB Joby Sorrell picked up two first downs with his legs on the drive, one of them being a run on 4th and 2, as he moved the Panthers into Maverick territory.

After a false start on a Panther receiver put TV behind the chains in a 3rd down and 15 situation with less than two minutes to play in the game, coach Ford called a timeout to draw up the big third down play.

Coach Ford drew up a beauty as the Panthers converted on a hook-and-lateral, also known as a hook-and-ladder, and not only picked up the first down, but also reached the end zone.

Sorrell dropped back and threw a nice pass to junior tight end/wide receiver Ethan Colegrove who ran a hook route. As soon as the Maverick defenders converged on Colegrove, he pitched the ball to a streaking May who sped down the sidelines for the 36-yard score.

The Panthers could have taken the lead on the two-point try, but Sorrell’s pass to May was incomplete as the score stayed at 32-32 with 1:36 left in the game.

James Monroe, who is now the largest school in Class A, took over after the ensuing kickoff at their own 45-yard line and on their second play head coach Chris Booth drew up some trickery of his own as he called a halfback pass.

The play call backfired against the Mavericks however as Cooper Ridgeway’s pass was picked off by Barker in the secondary and he returned it all the way to the James Monroe 31-yard line.

Now with a chance to take their first lead and win the game, Tug Valley wasted no time finding pay dirt again as Sorrell tossed his sixth TD of the game on a beautiful pass to senior Ian Reed who made a terrific one-handed catch with a defender hanging all over him and fell into the end zone for the 36-yard scoring strike.

The two-point try was no good but TVHS had their first lead of the game at 38-32 with only 1:05 remaining on the game clock.

James Monroe picked up one first down as they looked to drive and potentially tie or win the game but the Tug Valley defense picked off a pass for the second straight possession as junior Tanner Kirk intercepted Hazelwood for the second time in the game to seal the game for TVHS.

Sorrell had a career day despite the turnovers as the first-year signal caller set a career high in completions, passing yards, and touchdowns.

Sorrell finished 27-46 passing good for 444 yards and the six touchdown strikes. Four of his six TD passes were to May who was unguardable on the night as the all-stater hauled in 9 of 11 targets for 205 total yards.

Colegrove added six catches for 87-yards while Reed also snagged six balls for 71 yards, including the game winning TD reception with 1:05 to play.

Barker caught four passes for 51 yards and a score while Kirk finished with 60 total yards, with 45 yards coming on the ground and 15 yards through the air.

Tug Valley outgained the Mavericks by over 200 yards as they finished with 455 yards of total offense while holding JM to 236 yards.

Defensively the Panthers were led by May who is one of the top two-way players in the state. He finished with 14 total tackles, an interception, and a forced a fumble from his middle linebacker position. May’s interception was his fifth of the season in only three games.

Also performing well defensively for Tug Valley was Colegrove and freshman Buddy Marcum who each finished with six tackles while Shane Russell, Easton Davis, and Barker each added five tackles.

Colegrove, Russell, Lewis Marcum, and Mason Mullins each had a sack for the Panthers while Kirk picked off two passes and recovered a fumble.

Tug Valley entered their two-week quarantine with an undefeated 3-0 record and ranked No. 2 in the WVSSAC Class A Playoff Ratings so they will be in good position to secure a playoff seed after their lay-off.

On Oct. 23 TVHS will travel to Richwood, on Oct. 29 they will tussle with Man, and then play at Wirt County on Nov. 6 in the last Friday of the regular season.

Keep in mind however, COVID-19 and the state’s color-code metric system is a fluid situation and games could be added or removed at a moments notice.