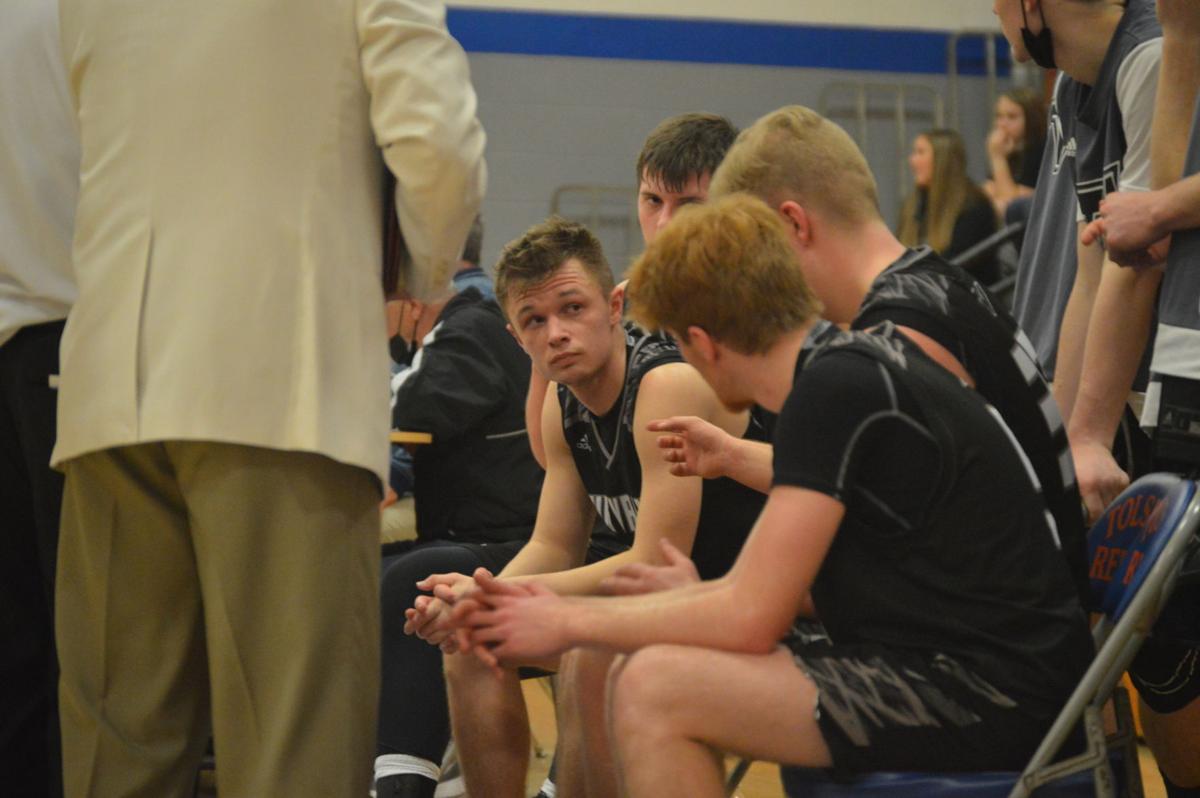 Tug Valley senior guard Ian Reed and teammates listen to instruction during a timeout earlier in the 2021 season in their 87-72 win at Tolsia. 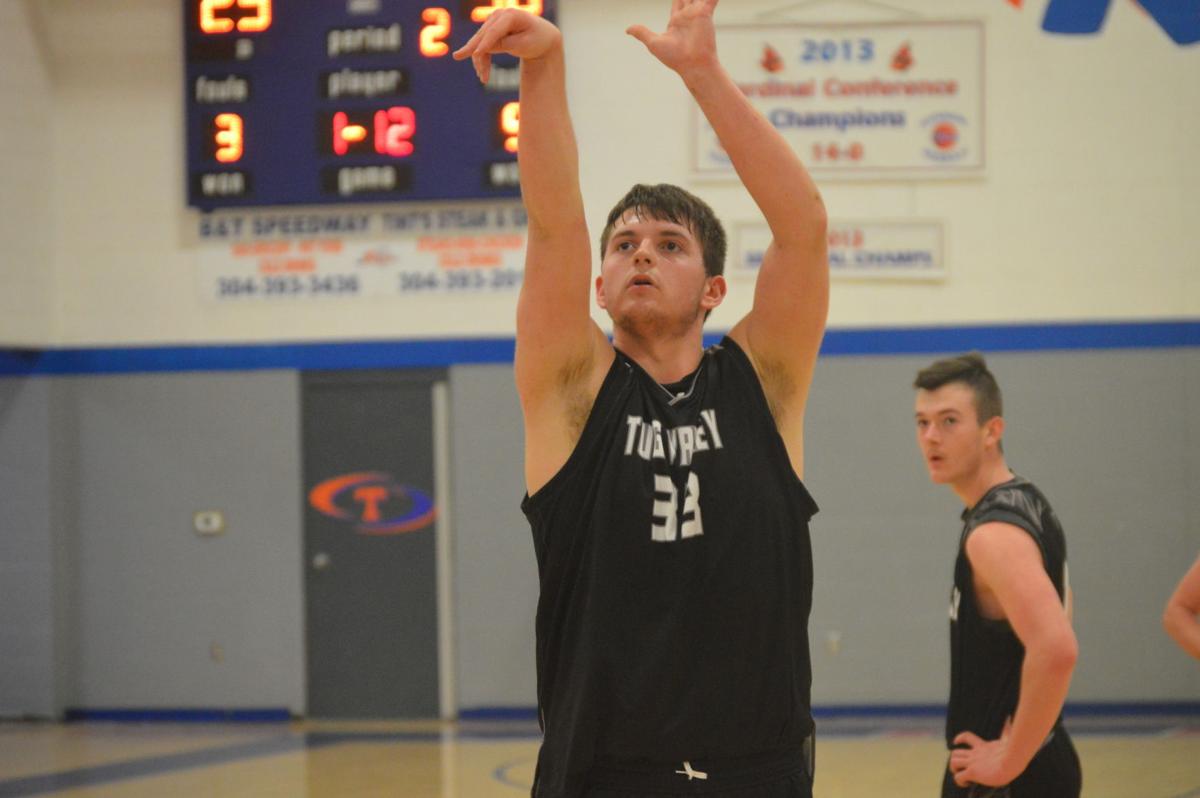 Tug Valley’s junior forward Ethan Colegrove follows through on a foul-shot while Justin Hall looks on in the background during an 87-72 at Tolsia early in the 2021 season.

Tug Valley senior guard Ian Reed and teammates listen to instruction during a timeout earlier in the 2021 season in their 87-72 win at Tolsia.

Tug Valley’s junior forward Ethan Colegrove follows through on a foul-shot while Justin Hall looks on in the background during an 87-72 at Tolsia early in the 2021 season.

NAUGATUCK — The No. 4 ranked Tug Valley Panthers picked up another win against a Top 10 opponent on Saturday night inside the TVHS Gymnasium as they had their way from start to finish with No. 8 ranked Greater Beckley Christian winning by a final score of 87-57.

The win capped off a perfect week for the Panthers (8-2) as they blew out Van on the road by a score of 84-28 on April 1 and then returned to Boone County the following night and did the same to Sherman, beating the Tide 97-52.

In the win against the Crusaders on Saturday, coach Garland “Rabbit” Thompson’s squad led 14-10 after the first eight minutes of action thanks to six quick points from senior Caleb May in the period.

The Panthers carried their momentum over into the second quarter and never looked back, as they dominated GBC outscoring them 28-11 in the stanza and taking a 42-21 halftime lead.

The second half was all Tug Valley as well as they won the third quarter 16 to 14 and took a 58-35 lead into the fourth and then won the final eight minutes of action 29-22 as coach Thompson went deep into his bench and the silver-and-black came away with the impressive 30 point win.

The Panthers were led by the duo of May and junior big man Ethan Colegrove in the win, as May paced the attack with 28 points on 9-17 shooting from the field and a perfect 8-8 from the foul line and Colegrove was right behind him with 25 points on 11-16 shooting and a game high 11 rebounds as well as three assists.

Senior Ian Reed joined them in double-figures as he totaled 14 in the win while Joby Sorrell tossed in seven and Easton Davis finished with six, Justin Hall netted three, and Dakota Ooten and Nick Alley each scored two to round out the scoring.

Kaden Smallwood paced GBC in scoring with 21 points while Joran McGinnis was next on the sheet with 13.

In the 84-28 win against Van, TVHS had 10 different players end up on the score sheet with the top performers being big man Easton Davis who led with 18 points and Colegrove who added 14 points and nine boards.

Reed joined them in double-figures with 10 in the game while dishing a game high eight assists while May had nine points, five assists, and five rebounds.

Hall and Ooten each added eight points in the game for Tug Valley while Brennan Pack had seven, Alley tossed in five, Isaac Deskins netted three, and Buddy Hall finished with two to round out the scoring against the Bulldogs.

In the 97-52 win against Sherman, even more Panthers got in on the scoring act as 12 different players scored, led by Colegrove’s game high 22 points.

May followed him with 16, Davis was right on his heels with 14, Ian Reed finished with 13 points and seven assists, and Sorrell joined them in double-figures with 10.

Alley was next on the sheet with six points, Buddy Hall scored four, Justin Hall and Alex Vance each scored three, and Deskins, Pack, and Ooten each totaled two to round out the totals for Tug Valley.

With the trio of wins TVHS sees their season record improve to 8-2 on the season with only three games remaining on the schedule.

Tug Valley is set to make their second trip to Miner Mountain in a week’s time on Tuesday night to play their in-county rival Mingo Central Miners in a 7:30 p.m. tip.

The two teams were supposed to play on March 30 but the game had to be postponed at the last minute while both teams were warming up due to a lack of officials.

TVHS will close out the regular season with two home games, first on Friday night as they will host Westside and then the regular season finale on April 12 when they welcome the No. 1 ranked team in Class A to Naugatuck and have a rematch with the Man Hillbillies.

The ‘Billies knocked the Panthers off when they were the No. 1 ranked team in Class A with a 85-56 thrashing in the Man Memorial Fieldhouse. The two teams could also meet for a third time in the upcoming sectional tournament, which is reportedly going to be held at the Logan Fieldhouse.