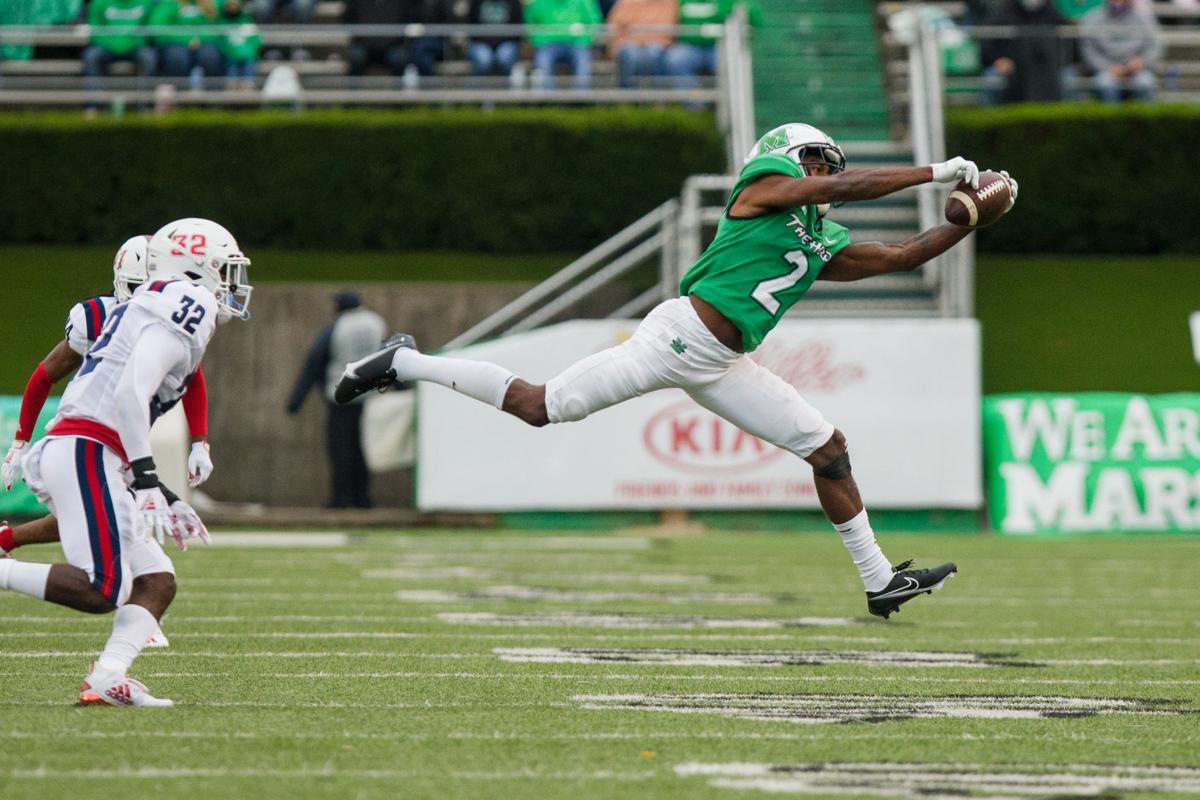 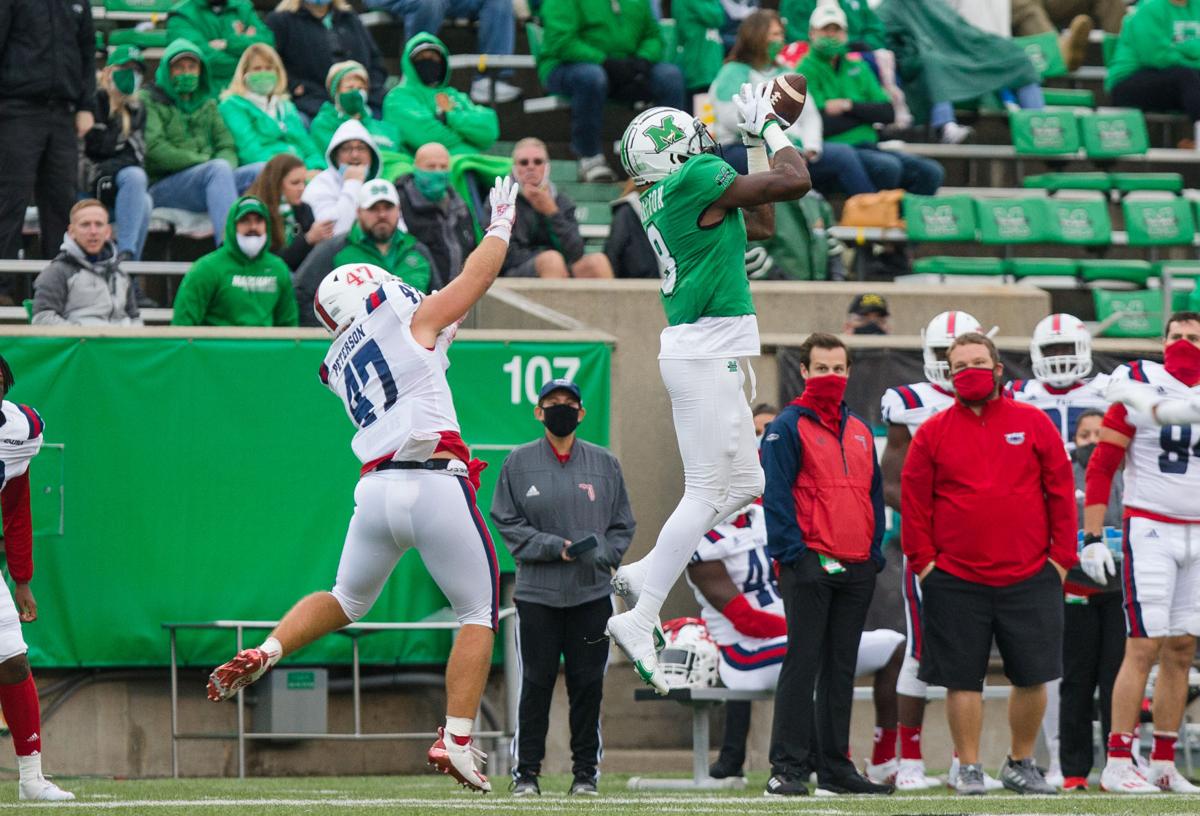 HUNTINGTON — It was not the best-looking game Marshall has played in the 2020 season.

However, No. 22 Marshall did get a 20-9 win over Florida Atlantic to keep the Herd undefeated while giving Marshall the outright lead in Conference USA’s East Division in a Saturday affair in Huntington.

“Sometimes, there’s a point in the season where you’ve got to grind one out, and that was the point,” Marshall head coach Doc Holliday said. “Honestly, I’m probably more proud of our football team in that game than I have in the other four victories because we had some adversity really for the first time.”

Marshall (5-0, 3-0 C-USA) had some offensive miscues at times and had to adjust to Florida Atlantic’s scheme, but the Herd defense kept the Owls at bay to secure its seventh win in eight meetings between the teams.

The win celebrated Homecoming 2020 for Marshall in front of 12,002 fans at Joan C. Edwards Stadium. However, that victory did not come easy by any stretch.

Marshall trailed for the first time on the season when Florida Atlantic’s Vladimir Rivas connected on a 43-yard field goal to give the Owls a lead with 8:12 left in the third quarter, breaking a streak of 276 minutes, 48 seconds that Marshall had not trailed to start the season.

However, that deficit was short-lived as Marshall quarterback Grant Wells connected with wide receiver Artie Henry on a 41-yard touchdown pass to put the Herd back in the lead. Marshall went on to score the game’s final 13 points to seal the win.

Wells said it was about remaining calm and not letting the moment get to big.

“At that time, we knew we had a whole lot of football game left to play,” Wells said.

For Henry, it was the second consecutive week that he contributed a big play to the passing attack.

Henry and fellow receiver Corey Gammage were pressed into duty last week after injuries at the wide receiver position limited the Herd.

In an increased role this week, both contributed well. Gammage led the team with six catches for 79 yards and Henry had five catches for 75 yards and a score.

Following Henry’s score, the Herd got a pair of field goals from Shane Ciucci (35 and 22 yards) and the defense buckled down to keep the Owls from getting closer.

For the fifth straight game, Marshall’s defense kept the opposition under 100 yards rushing, allowing just 17 yards on 15 carries in the second half.

Linebacker Tavante Beckett, who led Marshall with 13 tackles, including 1.5 tackles for loss, said Marshall’s defense wanted to put the clamps down after a trio of 10-plus yard runs in the first half, which included an 11-yard scoring run from Malcolm Davidson that cut the deficit to 7-6.

Marshall’s Ethan Driskell followed Josh Ball through the line to block the extra point, which kept the Herd in the lead at the break and allowed Beckett and the defense to regroup.

“It was just about being ready and adjusting on the fly,” Beckett said. “They had a couple things that they were calling and we had to figure it out quick.”

Florida Atlantic (1-1, 1-1 C-USA) did a solid job of bottling the Herd rushing attack up early in the contest.

Brenden Knox again was the workhorse for the Herd, logging 25 carries for 101 yards, marking the fourth game in a row he’s eclipsed the 100-yard mark.

Knox got Marshall on the board in the first quarter when he hauled in a check-down from Wells and turned it into a 58-yard touchdown. On the play, Wells avoided pressure up the middle and found Knox, who had no one within 20 yards of him initially.

Wells finished the game 18 of 31 for 251 yards and two touchdowns with two interceptions.

For the Owls, quarterback Nick Tronti absorbed several big hits to keep Florida Atlantic moving at times. Tronti was 18 of 30 for 148 yards and an interception.

Just as Marshall had a pair of turnovers, the Owls couldn’t overcome their own miscues, either.

Florida Atlantic aided the Herd’s cause on Saturday, committing 11 penalties for 126 yards. The Owls also dropped a would-be third interception for Wells in an eight-point game late, which led to a Ciucci field goal to make it a two-score affair.

After waiting for weeks between games at various times this season, Marshall has a quick turnaround ahead before it takes on FIU at 7 p.m. on Friday at Riccardo Silva Stadium in Miami.

In facing the first deficit of his collegiate quarterbacking career, Marshall freshman Grant Wells showed poise under pressure, connecting with Artie Henry on a deep touchdown pass to lift the Herd.