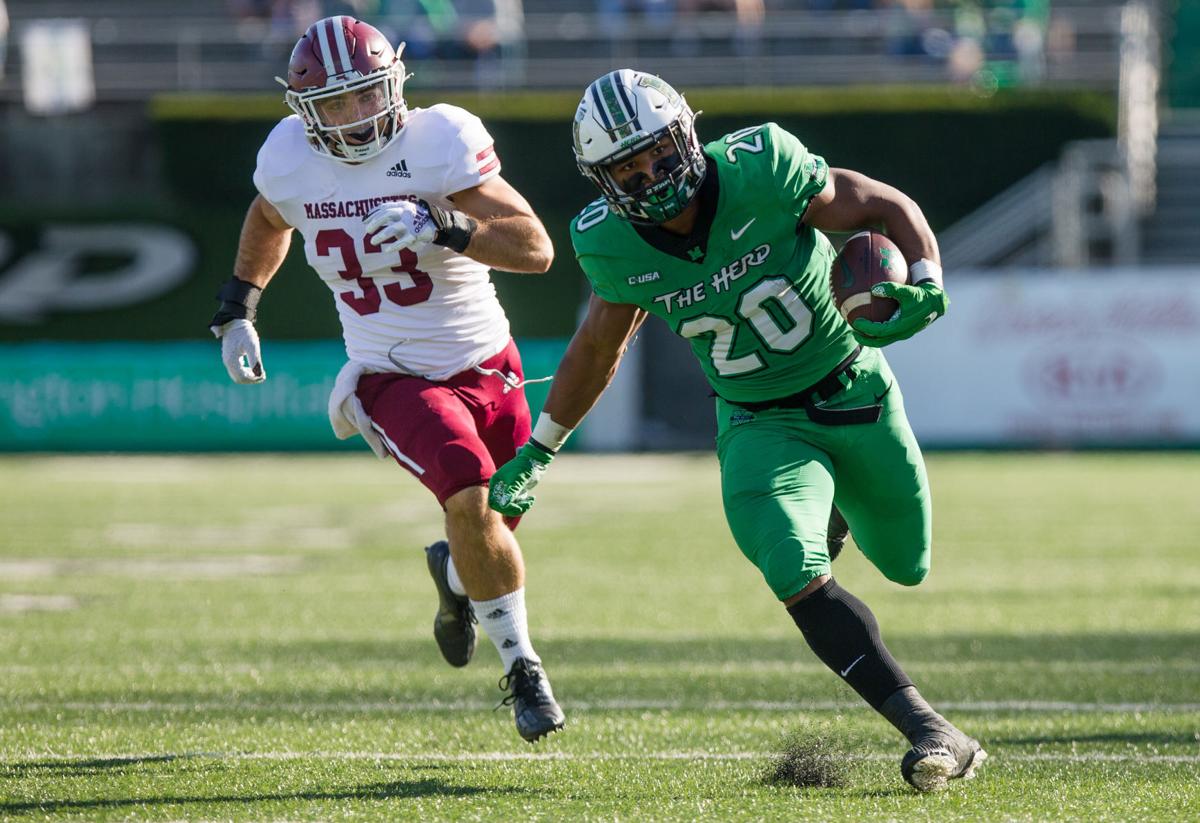 Marshall running back Brenden Knox (20) pulls away from UMass linebacker Mike Ruane (33) on his way to a 45-yard touchdown during an NCAA football game on Nov. 7 at Joan C. Edwards Stadium in Huntington. 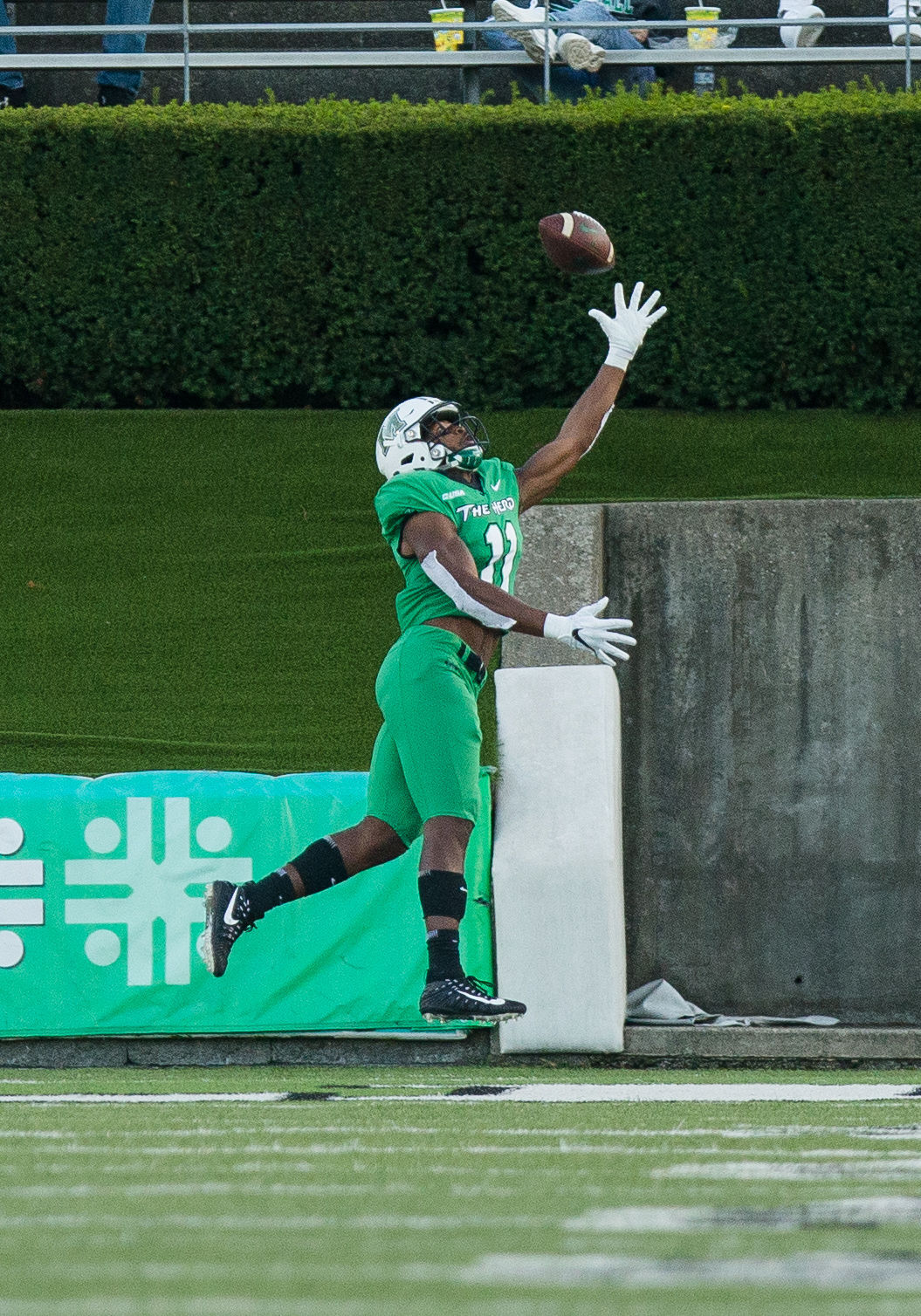 Marshall tight end Xavier Gaines makes a one-handed grab for a score against UMass during an NCAA football game on Nov. 7 in Huntington.

Marshall running back Brenden Knox (20) pulls away from UMass linebacker Mike Ruane (33) on his way to a 45-yard touchdown during an NCAA football game on Nov. 7 at Joan C. Edwards Stadium in Huntington.

Marshall tight end Xavier Gaines makes a one-handed grab for a score against UMass during an NCAA football game on Nov. 7 in Huntington.

HUNTINGTON — Marshall coach Doc Holliday wanted his team to stay sharp as it went out of conference for a matchup with the University of Massachusetts.

While the Thundering Herd didn’t come out as sharp as it hoped early, No. 16 Marshall regained its focus en route to an easy 51-10 win over the Minutemen in front of 11,711 fans on Saturday at Joan C. Edwards Stadium.

With the win, Marshall moves to 6-0 on the season.

“I told our kids that what a great football team will do is go out and take care of business on a day like today,” Holliday said. “That’s what they did, so I’m proud of them for doing that. We’ve got to get ready to go next week.”

Brenden Knox rushed for 118 yards and two first-half touchdowns while tight end Xavier Gaines took advantage of extended duty in the receiving department for another two scores in the win.

Marshall was without three wide receivers — Talik Keaton, Shadeed Ahmed and Broc Thompson — and Gaines picked up the slack in their absence.

Both tosses came from Grant Wells, who finished the game 21 of 30 for 228 yards and three touchdowns. More important, the Herd offense had zero turnovers, which was a focal point this week.

“We knew that if we don’t turn the ball over, as good as our defense is, that we’re going to win a lot of games,” Wells said.

The final touchdown toss to Gaines was one where the senior tight end fully extended for a one-handed catch for his second score in the span of four minutes.

“I ran 10 yards hard-stepped them inside, then (went) out for the corner,” Gaines said. “I didn’t think I was going to get the ball — it looked too far, to be honest. I just reached my hand out. Them gloves, man. It’s the gloves and the throw. Grant made a great throw and we had to make a play.”

Wells’ other scoring toss was a 19-yard screen to Corey Gammage, which came after a pair of blocks on the outside by the offensive line.

It was all part of a balanced day for the Herd, which finished with 495 yards of offense and had five different players score touchdowns.

Defensively, Marshall got caught on a pair of trick plays that went for big gains, but overall the defense made it six straight games in which an opponent was kept under 100 yards rushing.

For the Herd, linebacker Tavante Beckett had 11 tackles while Sam Burton added the first two sacks of his 2020 season.

UMass came into the game looking for its first points after being shut out in their opening loss against Georgia Southern.

It didn’t take long for the Minutemen to get those points, courtesy of Marshall miscues.

Knox started the game with a 45-yard touchdown run less than two minutes in, getting the Herd off to a fast start.

However, UMass (0-2) got a defensive stop on the Herd’s next possession, then used a trick play for a 37-yard gain, leading to a 2-yard score by Samuel Emilus on a throw from Will Koch.

The Minutemen’s other score was a 46-yard Jeremy Martin field goal, which came after another trick-play conversion for 25 yards.

Even though Sheldon Evans followed with an 11-yard touchdown to produce a 31-10 halftime lead, Holliday said the team addressed the two scores at the half.

“We had a couple trick plays and that type of thing where we should’ve made plays and didn’t,” Holliday said. “I know Brad (Lambert, defensive coordinator) and that defensive staff challenged those guys, our players challenged each other at halftime. They wanted to come out in the second half and shut that team out and that’s what they did. I’m proud of the way the defense responded.”

Marshall returns to Conference USA action next week when Middle Tennessee is scheduled to visit Joan C. Edwards Stadium at noon on Saturday.

That contest falls on the 50th anniversary of the 1970 Marshall plane crash, which is the deadliest sports-related tragedy in history.

Marshall takes on UMass during an NCAA football game on Saturday, Nov. 7, 2020, at Joan C. Edwards Stadium in Huntington.

As soon as Marshall announced its game with UMass, the Frohnapfel brothers - Blake and Eric - ran their version of the hurry-up offense, rallying family for a reunion in Huntington with their two beloved programs.

Let’s call it what it was.