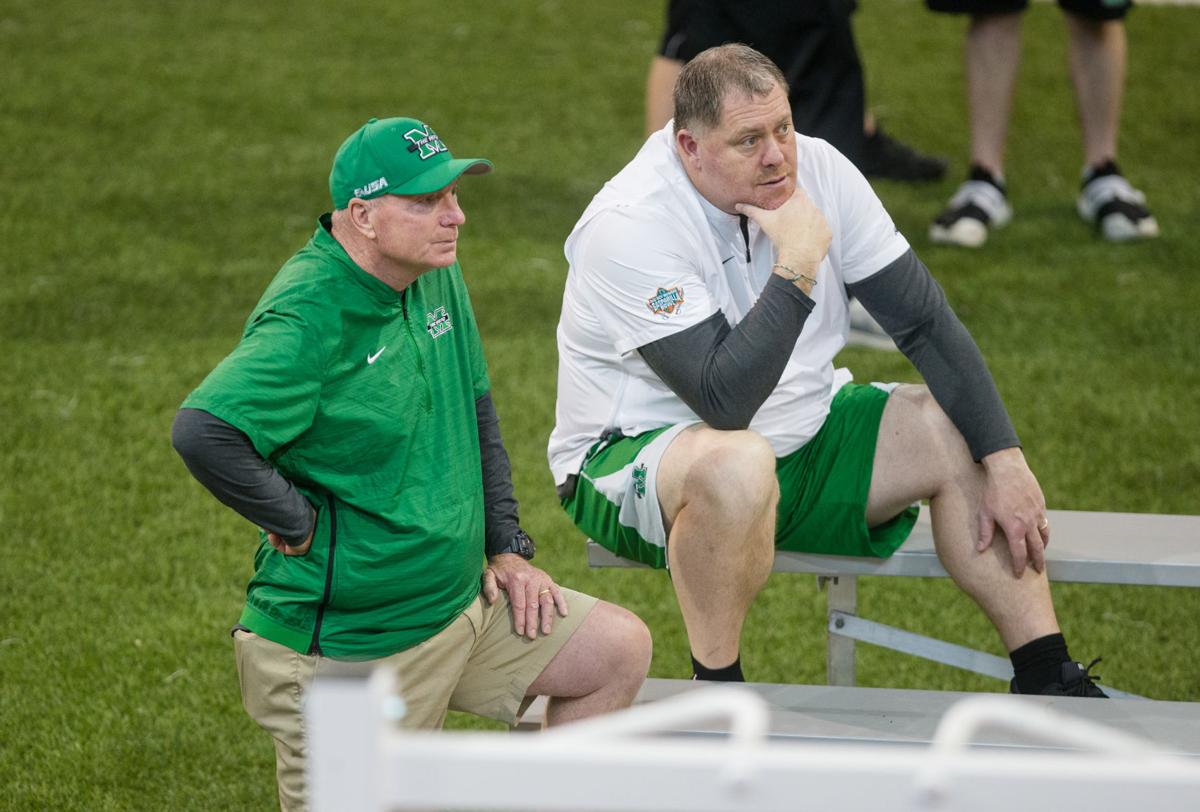 Marshall football head coach Doc Holliday, left, and assistant coach J.C. Price follow along as players participate in Pro Day drills on March 11 at the Chris Cline Indoor Athletic Complex in Huntington. The Cline Complex is one of four facilities that will be in use during the opening period of resocialization for Marshall student-athletes. 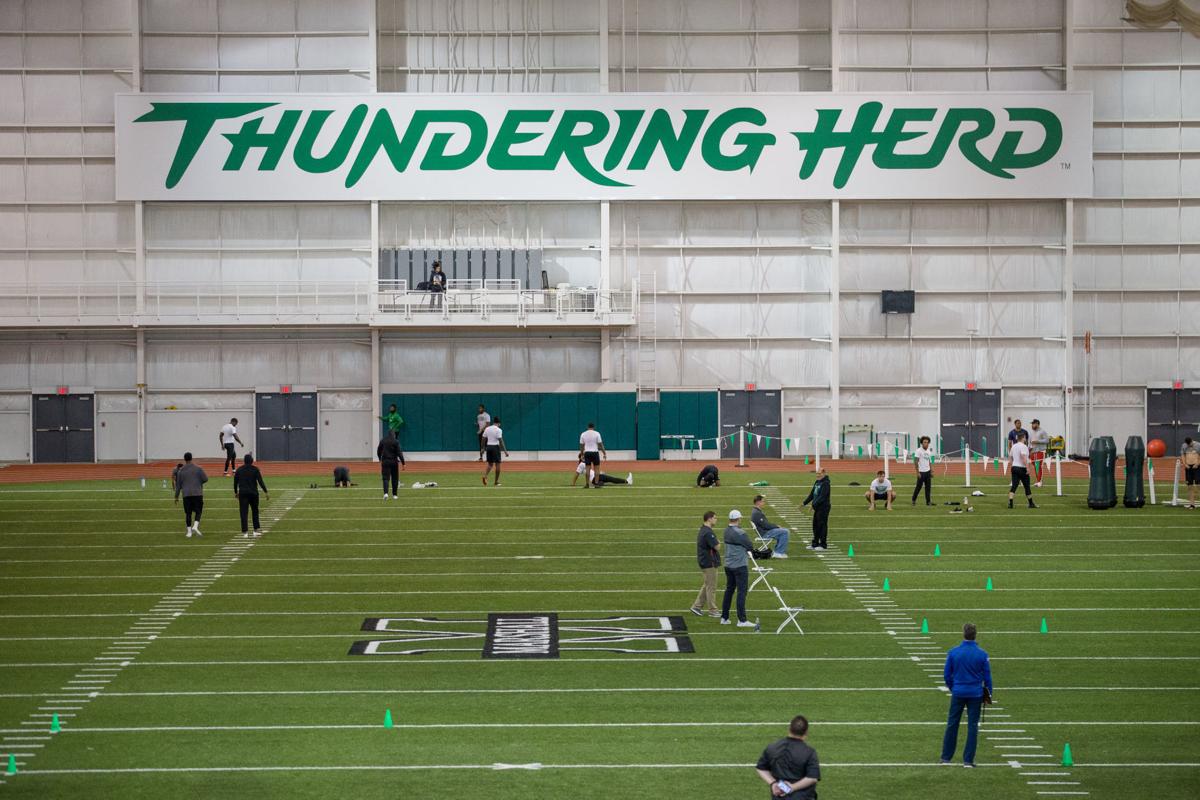 Marshall football players participate in Pro Day drills on Wednesday, March 11, 2020, at the Chris Cline Indoor Athletic Complex in Huntington. The Cline Complex is one of four facilities that will be in use during the opening period of resocialization for Marshall student-athletes.

Marshall football head coach Doc Holliday, left, and assistant coach J.C. Price follow along as players participate in Pro Day drills on March 11 at the Chris Cline Indoor Athletic Complex in Huntington. The Cline Complex is one of four facilities that will be in use during the opening period of resocialization for Marshall student-athletes.

Marshall football players participate in Pro Day drills on Wednesday, March 11, 2020, at the Chris Cline Indoor Athletic Complex in Huntington. The Cline Complex is one of four facilities that will be in use during the opening period of resocialization for Marshall student-athletes.

HUNTINGTON — Now, Division I college football players can physically prepare their bodies at their respective universities as if there will be some form of a 2020 season.

The NCAA Division I Council decided to allow the current moratorium for on-campus activities to expire on May 31, granting student-athletes the ability to return to campus for voluntary workouts, which will start June 1 and run through June 30.

West Virginia University did not announce its plans for voluntary workouts on Wednesday. A spokesperson for the university said it was too premature to comment, citing that the Big 12 Conference still must decide on its return date and it has yet to do so.

“In anticipation of today’s decision, we started a task force to address what we needed to do if this decision became reality,” Hamrick said. “We had a 10-person task force and they put together a plan for us to bring these young men back.”

The most notable portion of the plan included a mandatory self-isolation for the athletes once they arrive in Huntington.

With many players returning from across the United States, Marshall’s medical advisers wanted to ensure proper safety by mandating the quarantine and testing prior to the workouts.

“Our athletes are starting to arrive today (Wednesday) and tomorrow,” Hamrick said. “They will be self-isolated for seven days and only be allowed out for essential things. We will test every student-athlete after a seven-day self-isolation. After tests, which are around next Wednesday, they will stay self-quarantined and await their results. If they are cleared, they will be allowed to enter the weight room on June 1.”

Upon arrival on June 1, players will have their temperature screened and they will also answer a questionnaire in regards to health and activity in recent days.

Scott Morehouse, Marshall’s associate athletic director of game events and facilities and one of the task force members, said these measures will be adhered to strictly so as not to endanger any athletes or staff members.

“To not follow the rules, there is potential not only for them to get the virus, but also for them and their teammates to not get to play, so they have to follow the guidelines,” Morehouse said. “If they say they are here and they travel back home for something and come back, that clock starts over.

“There has to be some teeth to these guidelines to hold these guys accountable because this is a serious situation.”

While the NCAA’s decision on Wednesday opened up the availability for football, men’s basketball and women’s basketball athletes to return to campus, Hamrick confirmed that, for now, only football players are returning for voluntary workouts at Marshall.

In accordance with the plan implemented by Marshall, Hamrick said that only four facilities will be in use during the opening period of resocialization for student-athletes.

“We’re going to use the strength and conditioning weight room, the Chris Cline Indoor Athletic Complex, the athletic training room and Joan C. Edwards Stadium,” Hamrick said. “Other than that, everything else is closed to our student-athletes.”

Hamrick said the goal is to allow athletics staff and facilities personnel to focus on those facilities in order to ensure player safety with consistent disinfecting of equipment.

“After a kid uses a station during a workout, that station will be disinfected and wiped down,” Hamrick said. “There will not be another workout on that station until that occurs. If you go bench press and get up, before the next guy lifts, our people will disinfect that bench. We will make sure our facilities are clean not only on a daily basis, but a minute-by-minute basis.”

In addition to the weight room, Hamrick said the artificial turf at Joan C. Edwards Stadium and the Chris Cline Indoor Athletic Complex will be treated with a concentrated disinfectant three to five days before its first use.

Hamrick added that all facilities will only be available to student-athletes and they will have strict instructions on entrance and exit procedures of a facility.

“Those facilities will have limited access,” Hamrick said. “We don’t want anyone in there who hasn’t been quarantined or hasn’t been tested. All our staff members will wear proper PPE (personal protective equipment) items throughout workouts.

“We will have a route of how to get in and out of the facility. They can only go in one way and out one way, and athletes traveling between facilities will have to wear N95 masks.”

Hamrick said the four-week process of preparing for Wednesday’s decision was not easy, but he felt it necessary — especially in the last two weeks when it became apparent that public gymnasiums and workout facilities in West Virginia would open up, which they did on Monday.

“With health clubs, gyms and recreation facilities opening here in West Virginia, we would prefer our student-athletes being in our facilities where we can control who they are with, how close they are, the cleanliness of equipment and we can check symptoms,” Hamrick said.

“It’s an extensive, well-thought-out plan that we’ve worked on over the last four weeks, and I’d like to thank all those who worked on this,” Hamrick said. “I think we’ll be ahead of the curve when our players are able to start voluntary workouts.”

Getting back to work as soon as possible was crucial, Hamrick said, because the team is one of a handful nationally scheduled to play in Week Zero, which opens the 2020 season.

Should the season start on time, Marshall travels to Greenville, North Carolina, to take on East Carolina in the season opener on Aug. 29.

West Virginia tentatively starts its 2020 season on Sept. 5 against Florida State in the Chick-fil-A Kickoff Game at Mercedes-Benz Stadium in Atlanta.