Sign Up
Log In
Purchase a Subscription
You are the owner of this article.
Edit Article Add New Article
You have permission to edit this article.
Edit
Welcome, Guest
Home
News
COVID-19 Vaccine
Sports
Features
Photos
Opinion
Obituaries
e-Edition
Contests
Classifieds
Cars
Homes
Jobs
Legals
HD Media
No Thanks
1 of 4 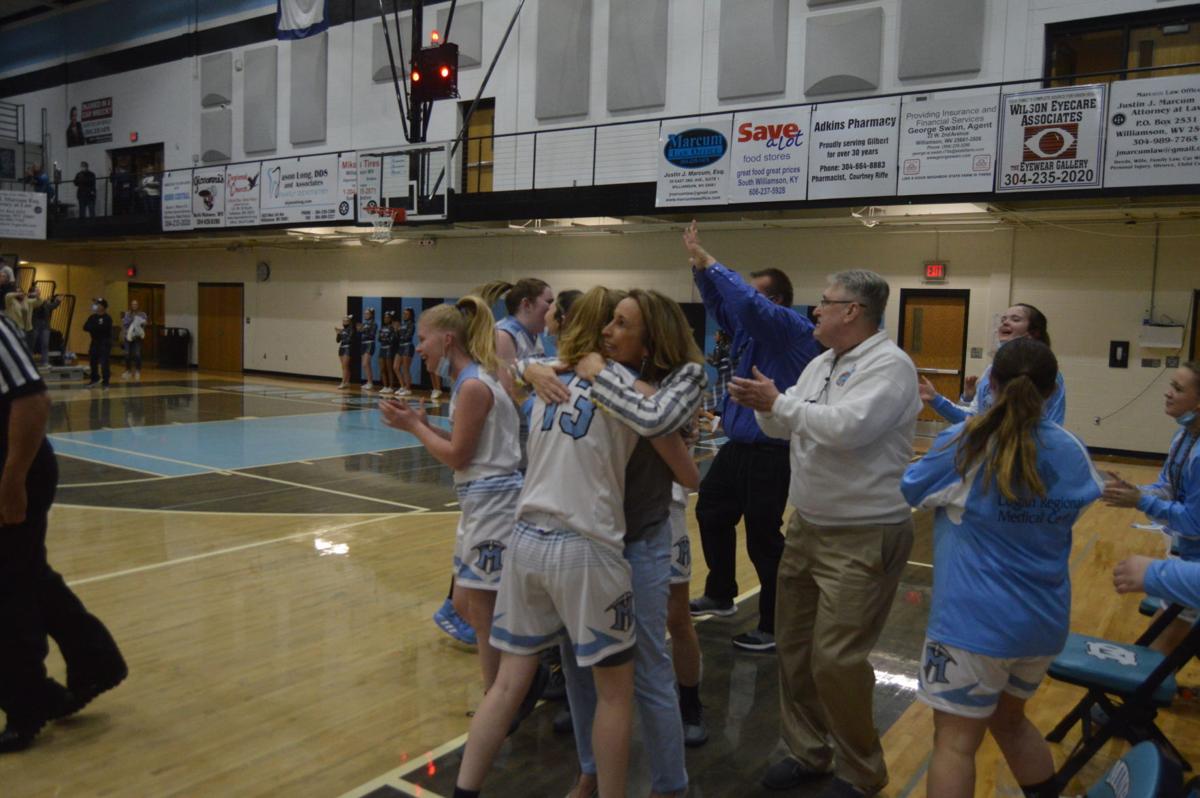 Mingo Central head coach Kim Davis Smith embraces senior Scarlet Thomason while she and the rest of the Lady Miners celebrate following their 48-39 win over Summers County in the Girls’ Class AA Region 3 Co-Final on Thursday, April 22, 2021 in Newtown, W.Va. 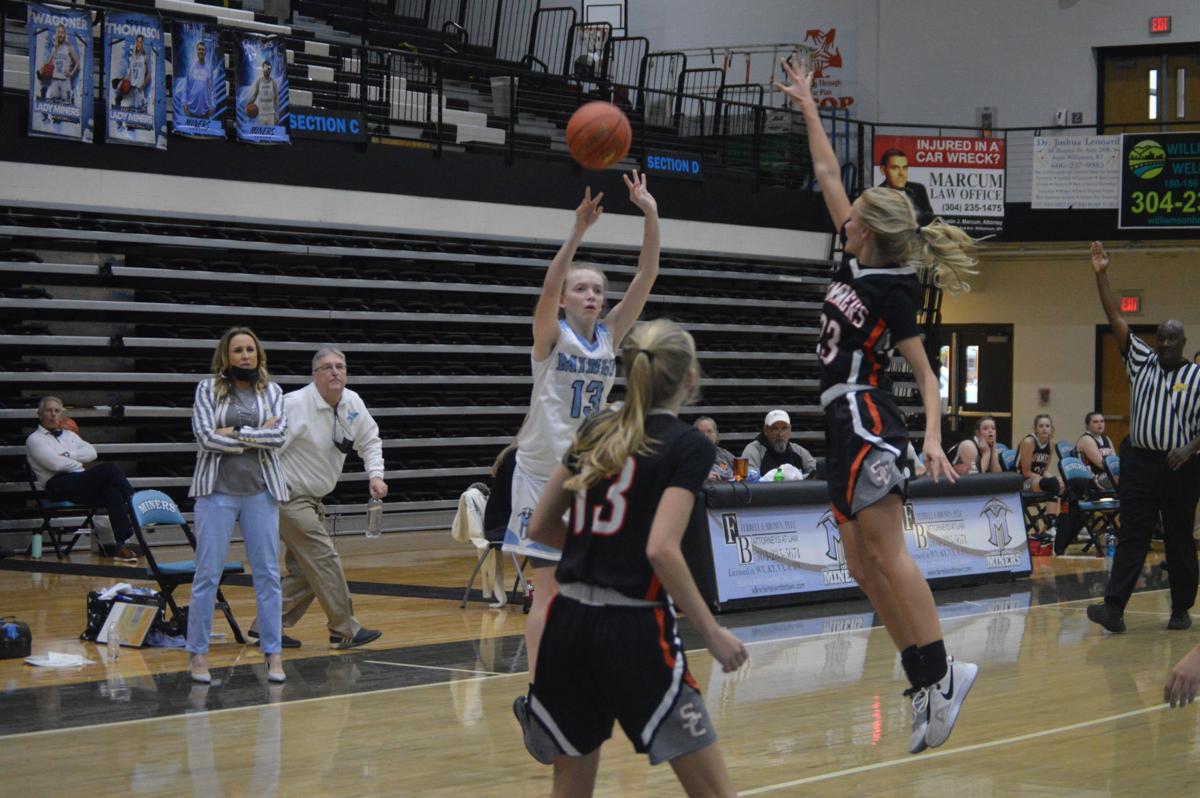 Mingo Central sharp-shooter Scarlet Thomason drains one of her six 3-pointers during the Lady Miners 48-39 win over Summers County in the Girls’ Class AA Region 3 Co-Final on Thursday, April 22, 2021 in Newtown, W.Va. 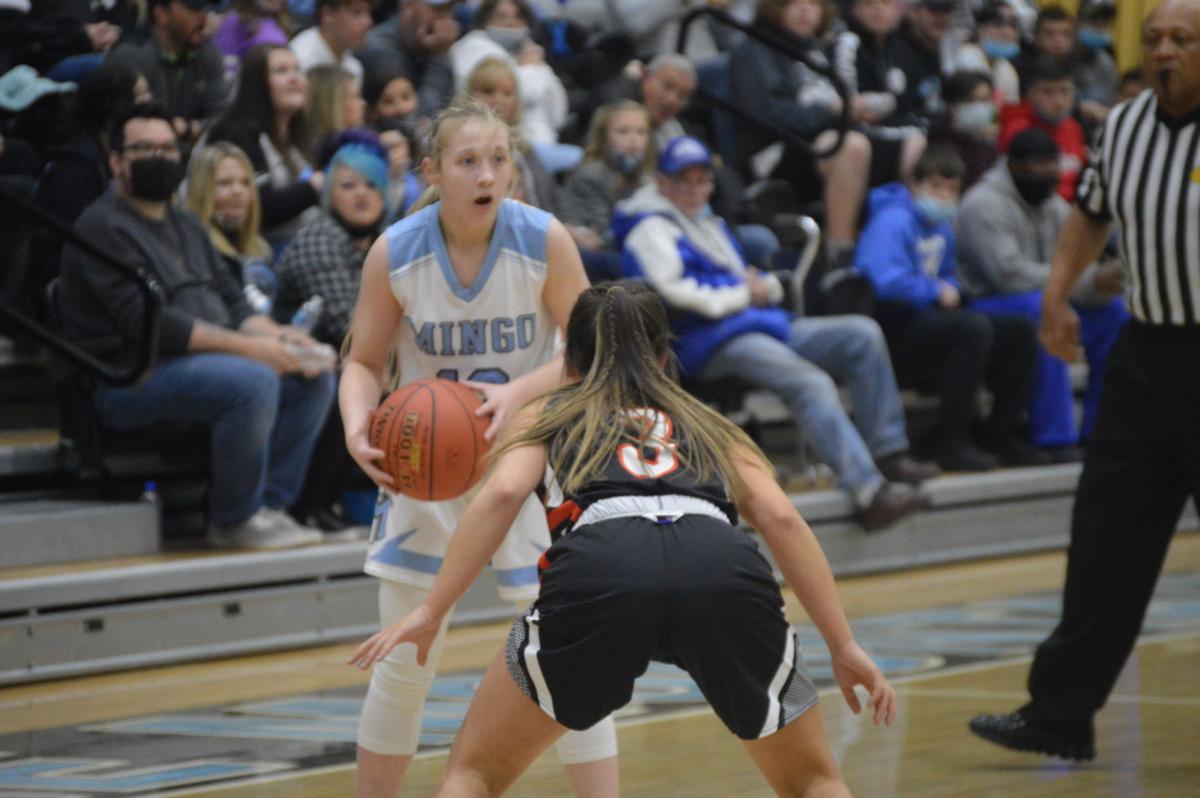 The Mingo Central Lady Miners pose for a team photo following their 48-39 win over Summers County in the Girls’ Class AA Region 3 Co-Final on Thursday, April 22, 2021 in Newtown, W.Va.

Mingo Central head coach Kim Davis Smith embraces senior Scarlet Thomason while she and the rest of the Lady Miners celebrate following their 48-39 win over Summers County in the Girls’ Class AA Region 3 Co-Final on Thursday, April 22, 2021 in Newtown, W.Va.

Mingo Central sharp-shooter Scarlet Thomason drains one of her six 3-pointers during the Lady Miners 48-39 win over Summers County in the Girls’ Class AA Region 3 Co-Final on Thursday, April 22, 2021 in Newtown, W.Va.

The Mingo Central Lady Miners pose for a team photo following their 48-39 win over Summers County in the Girls’ Class AA Region 3 Co-Final on Thursday, April 22, 2021 in Newtown, W.Va.

NEWTOWN — The Mingo Central Lady Miners made history on Thursday night as they secured the young school’s first ever trip to the Girls State Basketball Tournament with a 48-39 win over Summers County in the Class AA Region 3 Co-Final played high atop Miner Mountain.

“This is huge for this program,” second year head coach Kim Davis-Smith said after the win. “Last week I told the girls that the sectional win was a big stepping stone for us in the right direction but that this Regional final game at home could be a defining moment for us...I just so proud of our girls and how hard they came out and played tonight from start to finish.”

The Lady Miners (9-4) were named as the No. 7 seed in the Class AA field and will take the court at the Charleston Coliseum and Convention Center on Wednesday night at 7:15 p.m. against No. 2 seed Wyoming East (8-2).

Coach Davis-Smith, who played in the state tournament as a member of the 1990 Class A State Champion Burch Lady Bulldogs, said she is not only excited for her players to get to experience the bright lights of Charleston, but the entire MCHS community.

“We talked to our girls before the game about the soul of a team, what our purpose is here, who do we play for?,” Davis-Smith said. “We play for our communities, we play for Matewan, Gilbert, we play for Williamson and Delbarton. And this is huge, this brings excitement to this community.”

In the nine point win over Summers County, the Lady Miners only trailed once in the entire contest early on after Taylor Isaac’s hit a 3-pointer to give the Lady Bobcats a 3-2 lead.

From that point on it was all Mingo Central went on 22-4 run over the next quarter and a half as they stunned Summers County and took a 24-7 lead with 5 minutes to play in the first half.

During that run, MCHS senior sharp-shooter Scarlet Thomason caught fire from deep like she has many times before and hit five 3-pointers to help her team jump out to the big lead while sophomore center Madisyn Curry also scored eight early points and cleaned up on the offensive and defensive class.

Summers County trimmed the Mingo Central lead to 27-15 going into halftime and down to 27-20 early in the second half but senior Jenna Wagoner and Curry scored four points apiece to push the lead back to 35-22 late in the third.

After the Summers County had cut the MCHS lead back to single-digits at 35-26 early in the fourth quarter, the Lady Miners responded with a bucket by Curry and another three from Thomason to put the dagger in the heart of the Lady ‘Cats as they took a 40-26 lead with less than six minutes to go in the game.

Summers County continued to battle down the stretch but the Lady Miners never let the lead dip below seven as they made the plays down the stretch to secure the school’s first ever win in a Region final and get revenge against the Lady Bobcats who had defeated MCHS 64-39 in the regular season.

“I have much respect for Summers County, they have a legacy program. Seven state championships speaks for itself,” Davis-Smith said. “But I knew that our team that showed up when we played them in March was not who we really were. I told the girls that we were much better than that and they completely bought in and believed...I’m so proud of these kids, just so proud of them.”

MCHS was led in scoring on the night by Thomason who finished with a game high 20 points on a total of six 3-pointers, including her early barrage of five treys in the first 10 minutes of the game.

Curry turned in the best game of her career on the big stage as she recorded a double-double by scoring 16 points on 7-10 shooting and grabbing 20 rebounds, including eight on the offensive end alone. The sophomore out-rebounded Summers County by herself, as the Lady ‘Cats were credited with only 15 rebounds.

Wagoner also finished in double-figures on the night with 11 points, including 8-8 from the free-throw line in the second half, while also dishing out six assists.

Alyssa Davis added a free-throw to round out the scoring for MCHS while Davis and Megan Adkins were each credited with eight rebounds.

If Mingo Central an knock off Wyoming East in the opening round they would advance to the semifinals to play the winner of No. 3 seed Petersburg and No. 6 seed Charleston Catholic on Friday at 9:30 a.m.

The Class AA State Championship Game is scheduled for Saturday afternoon at 12:30 p.m.