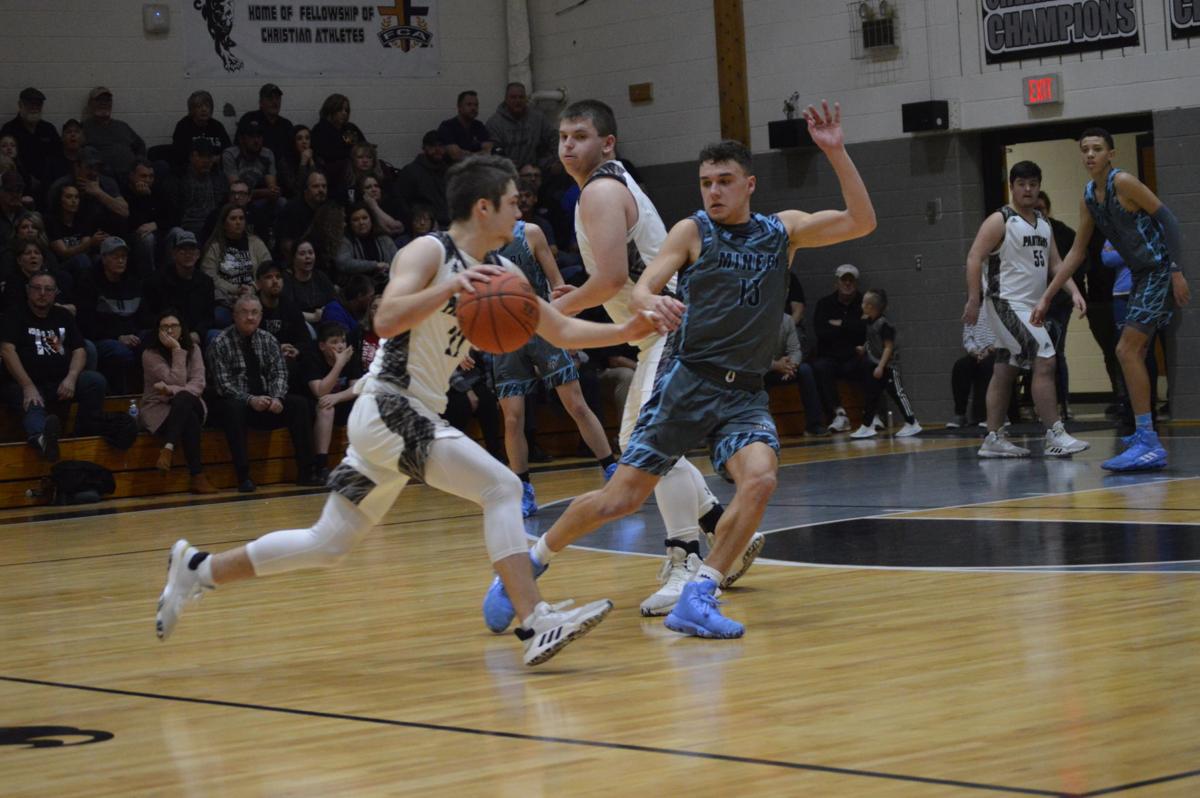 Jarrid McCormick/Williamson Daily News Tug Valley guard Caleb May tries to take Mingo Central’s Drew Hatfield off the dribble during the Miners 61-57 win over the Panthers on Tuesday, Jan. 21, 2020 inside the TVHS Gymnasium. 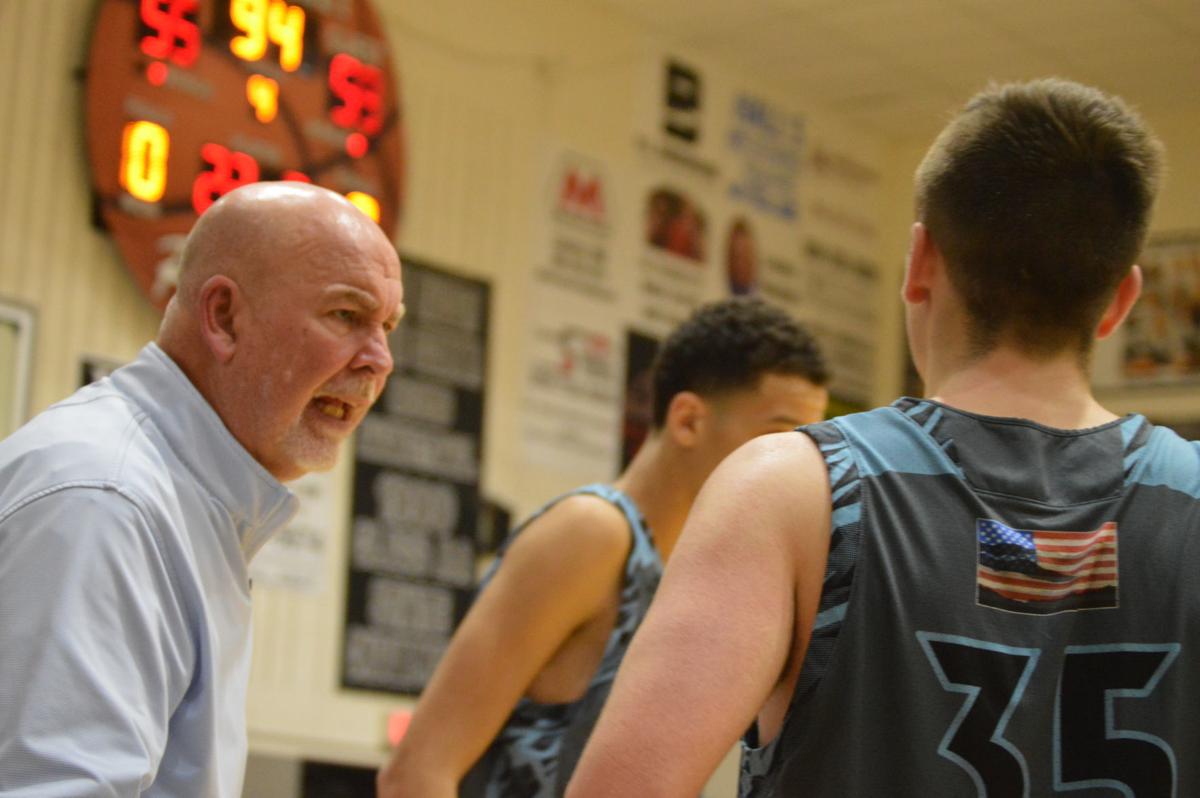 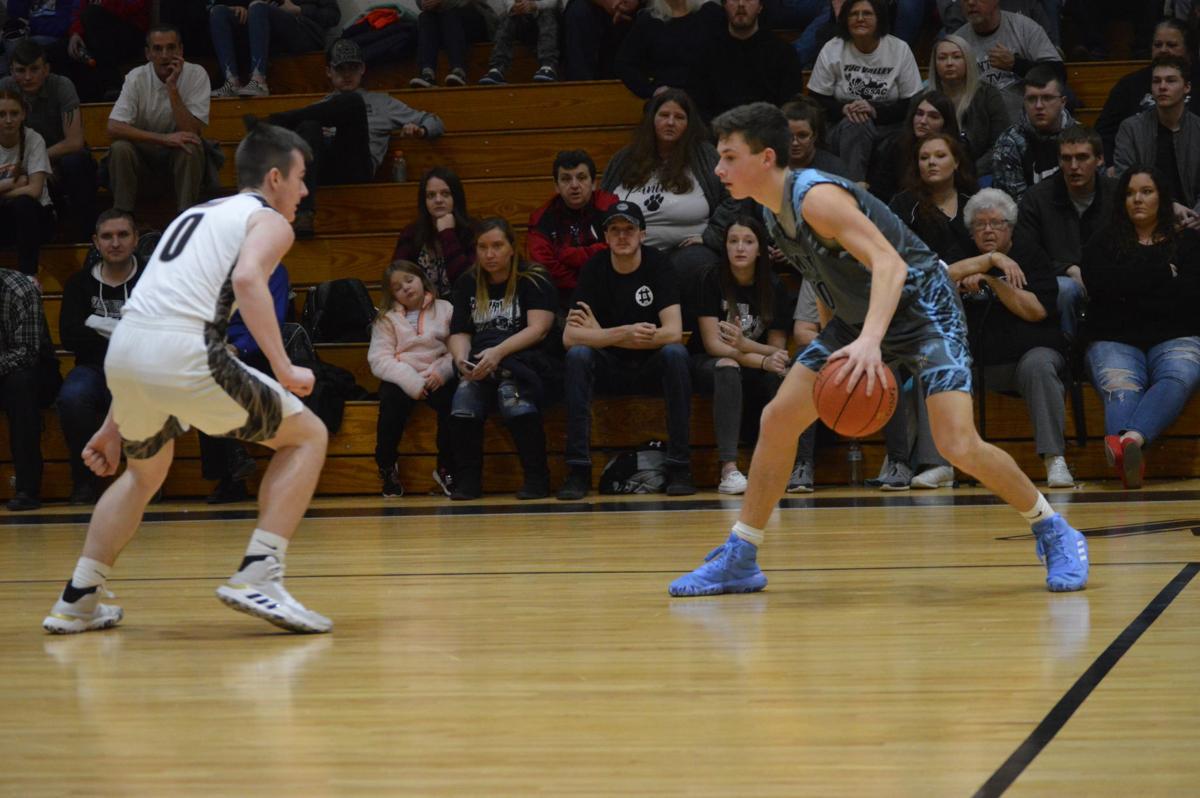 Mingo Central’s Devin Hatfield s guarded by Tug Valley’s Justin Hall during the Miners 61-57 win over the Panthers on Jan. 21 inside the TVHS gymnasium.

Jarrid McCormick/Williamson Daily News Tug Valley guard Caleb May tries to take Mingo Central’s Drew Hatfield off the dribble during the Miners 61-57 win over the Panthers on Tuesday, Jan. 21, 2020 inside the TVHS Gymnasium.

Mingo Central’s Devin Hatfield s guarded by Tug Valley’s Justin Hall during the Miners 61-57 win over the Panthers on Jan. 21 inside the TVHS gymnasium.

NAUGATUCK — The Mingo Central Miners and the Tug Valley Panthers met up for the 18th time on the hardwood on Tuesday night of this past week and it was the Miners who came away with the 61-57 win.

For the Miners, it was their first win in Naugatuck in school history and only their third win all-time over TVHS as they are now 3-15 in 18 matchups against the Panthers.

The game was a back-and-forth affair in the first half of play as the two teams traded baskets throughout the opening half. The game was all knotted up at 20 apiece with time winding down when sophomore guard Devin Hatfield connected on a three from the top of the key in the closing seconds to give MCHS the 23-20 lead going into the break.

Coming out of the break, the coach Stan Elkins led Miners carried that momentum over and controlled the third quarter holding TVHS to 2-13 shooting and the period and extended their lead to 39-25 going into the fourth quarter.

In the final eight minutes of play, coach “Rabbit” Thompson’s Panthers finally came to life on the offensive end and posted 32 points, led by 19 by Caleb May, to get themselves back in the game.

The Panthers trimmed the Miner lead down to three at one point, but Devin and older brother Drew Hatfield connected on 15-16 free-throws combined in the fourth quarter to secure the big road win.

“This is a big win for our program,” coach Elkins said following the win. “It’s kind of bittersweet because two guys (Thompson and Curt Fletcher) sitting on that other bench played a big role in getting me where I am today. But anytime you can come down here and get a win it’s huge for your team.”

Devin led the Miners in scoring on the night as he fired in 24 points, including four 3-pointers, while Drew was right on his heels and finished with 23. They combined for 47 of the 61 points for MCHS in the win.

Colton Blankenship followed them with seven points while Jarius Jackson flipped in five and Josh Wellman tossed in two to round out the scoring.

May was the only player for Tug Valley to score in double-figures as he finished with 23 points on the night. May was held to four points until the fourth quarter when he nearly brought Tug Valley all the way back scoring 19 points.

The loss for Tug Valley dropped them to 5-8 on the season. They received a week off before returning to action last night at sectional foe Tolsia in an important game for seeding purposes, but scores and stats were not available by press time. TVHS won the first matchup in Naugatuck on Jan. 3.

The Panthers will again take the court on Friday in the King Coal Classic at Logan against Parkersburg Catholic who is ranked at No. 4 in the latest Class A AP Poll.

The Crusaders ended the Panthers season last year with a 59-53 loss in the Region IV Co-Final.

The win for the Miners improved them to 8-3.

MINGO CENTRAL 67, MAN 56 (Jan. 23): The Mingo Central Miners were back in action in an important home sectional game on Thursday night against the Man Hillbillies and it was the Miners who came away with the 67-56 win.

The Miners did their damage on the defensive end in the first half as they held the Billies to single digit points in both the first and second periods to take a 26-16 halftime lead.

Mingo Central extended their lead to 12 points going into the final eight minutes of play and the ‘Billies would attempt to claw their way back into the game in the fourth quarter but senior Drew Hatfield scored 16 of his game high 26-points to help MC hold on for the 11-point win.

Hatfield connected on three-3-pointers and hit 11-12 foul-shots in the final eight minutes of play as he had ice-water in his veins from the charity stripe.

Nathan May joined him in double-figures with 11 points off the bench while Colton Blankenship and Devin Hatfield each scored nine, Jarius Jackson flipped in eight, and Josh Wellman and Jacob May each scored two.

The loss for Man dropped them to 8-3 while the Miners improved to 9-3 with the victory.

WESTSIDE 87, MINGO CENTRAL 76 (Jan. 24): The Mingo Central boys’ basketball team lost a tough game on the road at Westside on Saturday night by a final score of 87-76, despite a season high 38 points from Drew Hatfield.

The Miners won the first quarter of action 16-11 to take a five point lead into the second frame, but the Renegades turned the tide in the second stanza winning it 25-15 to take a 36-31 halftime lead.

Westside continued to light up the nets in the second half outscoring Mingo Central 24-18 in the third to take a 60-49 lead into the fourth where they would lock up the 11-point victory.

Hatfield led the Miners with 38 points including four 3-pointers and connecting on 12-14 shots from the foul line. Younger brother Devin Hatfield also reached double-figures with 10 points

Jacob May contributed nine points off the bench on a trio of 3-pointers while Jarius Jackson chipped in five, Josh Wellman and Ethan Evans added four, and Colton Blankenship rounded out the scoring with a point.

The loss for the Miners dropped them to 9-4 on the season and 0-5 all-time against Westside. MCHS took the court on Tuesday at Logan in another important sectional game, but scores and stats were not available by press time.

Mingo Central will hit the road again on Friday and play at Nitro in a 7:30 p.m. tip.