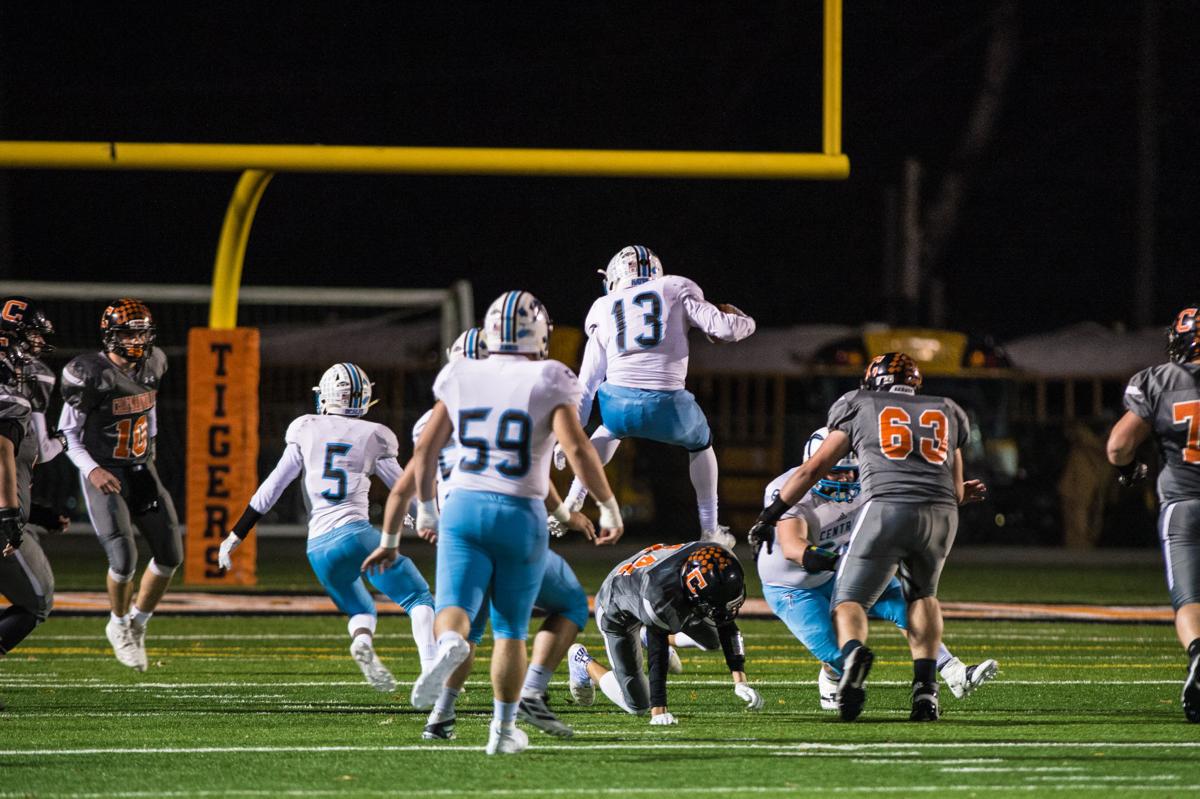 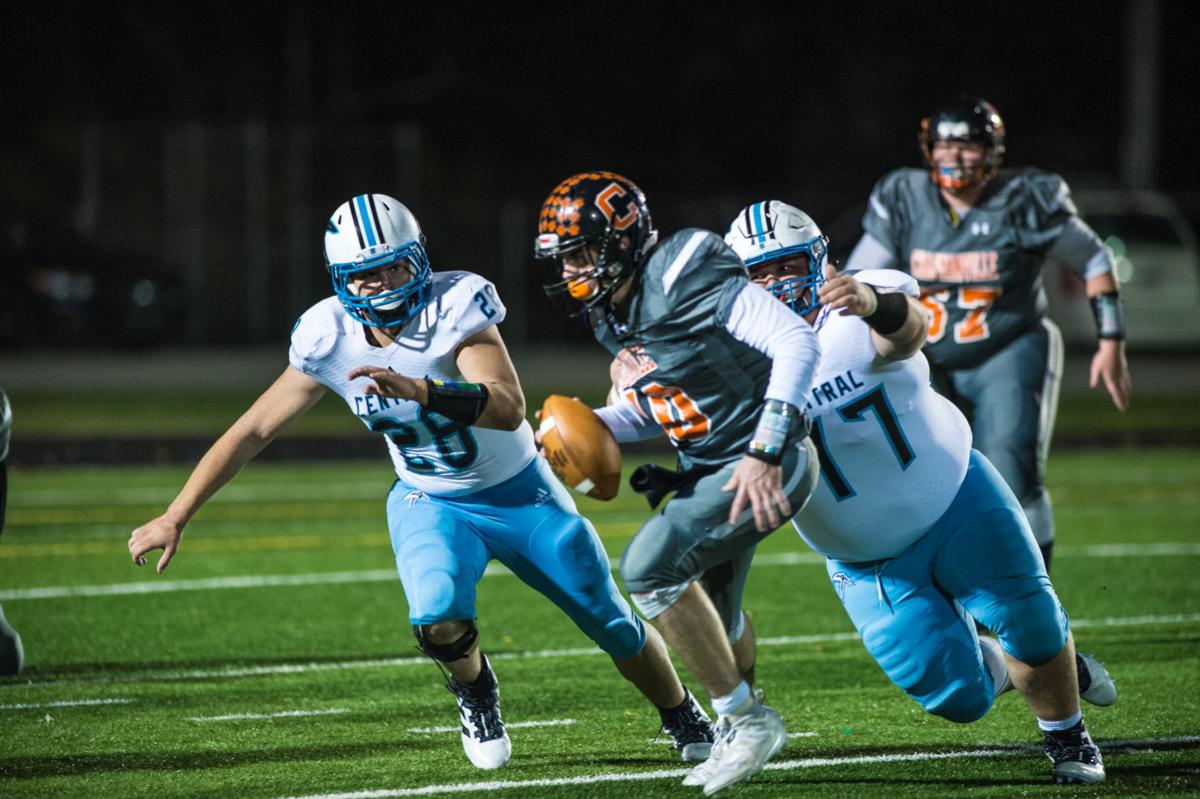 CRAWLEY CREEK — The Chapmanville Tigers couldn’t keep up with Mingo Central on Friday night as the Miners won by a final score of 49-14 at Tiger Stadium.

MCHS (7-2) would crack the scoreboard just 35 seconds into the game as junior quarterback Daylin Goad found the endzone on a run from two yards out. Goad’s PAT try was successful, and Mingo lead 7-0 with 11:35 left in the first quarter.

After Chapmanville couldn’t come through on a fourth down attempt on their first drive, the blue and white would respond with points on their next possession. With 8:20 left in the first quarter, Goad would connect with sophomore wide receiver Devin Hatfield for a 19-yard touchdown pass. The PAT was good, and the score went to 14-0 Miners.

The Tigers would go three-and-out on their next drive, and again, the visitors would capitalize. Goad would add his second passing touchdown of the first quarter as he hooked up with senior wide receiver Drew Hatfield who caught it and ran 41 yards for a touchdown with 3:10 left in the first period. Goad’s PAT again was good, and the lead was now 21-0 Mingo Central.

Halfway through the second quarter at the 6:04 mark, the home team would get on the board. Senior quarterback Chase Berry threw a pass to senior wideout Waylon Hensley that went 15 yards for a touchdown. Senior place kicker Xavier Trump’s extra point was good, and the Tigers now trailed 21-7.

The road team would respond as Goad would tack on his second rushing touchdown of the night, this time from one yard out. He would then kick a successful extra point, and the Miners pushed their lead to 28-7 with five minutes left in the first half.

The Orange and Black would add another score before the half came to a close. With 10 seconds left in the second quarter, Berry would call his own number on and run the ball 14 yards to pay dirt on a quarterback keeper. Trump’s PAT split the uprights, and CRHS cut into the Mingo lead at 28-14 heading into the halftime locker rooms.

On the Miners first drive of the second half, they would cap it off with a touchdown. Goad threw a pass to Devin Hatfield and the ball was tipped by a Chapmanville defender, but Hatfield caught it anyway and ran 66 yards to the house. Goad’s PAT was good, and Mingo Central extended their lead to 35-14 with 9:55 left in the third quarter.

With 11:43 left in the fourth quarter, Goad would once again find the endzone with his feet. He would run it in this time from seven yards away, and after his successful PAT, the Blue and White’s lead was propelled to 42-14.

The Miners weren’t done scoring points. Senior tailback Tanner Cisco would get his name on the scoresheet with a four-yard touchdown run with 1:48 left in the fourth quarter. Goad tacked on the extra point, and the visitors’ lead would reach the final tally of 49-14.

This was a night where history was made in the state of West Virginia, as Mingo Central wideout Drew Hatfield broke the all-time state records for catches in a 10-game regular season (99) and for most receiving yards in a 10-game regular season (1,443). He finished the game with 16 catches, 216 yards and one touchdown. He now has 107 catches and 1,598 receiving yards this year, which are both new state records. Hatfield admitted that he didn’t expect to achieve these feats.

“It’s definitely something you don’t expect,” Hatfield said. “Especially coming into the season, I never thought I was going to break any records. I was just focused on winning games and getting better as the season goes on. So to break two records tonight, it’s definitely a good feeling, but I’m just trying to get focused on next week for Winfield.”

He also mentioned how he couldn’t have broken the records without Goad.

“I can’t get the ball without a quarterback,” he said. “I’ve been blessed to have two good quarterbacks and for Day-Day to come in last year as a sophomore and only get better as a junior and think he has another year, it’s just crazy how much better he’ll be next year, so I give a lot of credit to my quarterback.”

Mingo head coach Josh Sammons acknowledged what it meant to have a player like Hatfield on his team.

“It means everything,” Sammons said. “He’s a great kid, and I’ve said this numerous times in numerous interviews, but he deserves it and he’s a kid you want to see get something like that. It’s a tough record for him to break, and for him to do that, I couldn’t be more proud of him.”

Sammons expects to keep involving him heavily in the Miner offense as well.

“It’s the same thing you’re seeing week in and week out, we’re going to get our best players the ball and everybody knows that’s what we do,” he said. “We’re not trying to hide anything, so I see us continuing to do what we’ve been doing, and hopefully having success along with doing that.”

The Miners out gained Chapmanville in yardage 544 to 254, including 430 coming through the air from the arm of Goad.

He finished 27-29 passing for the 430 yards and three touchdowns and also added 34 yards rushing and three more scores.

Mingo Central improved to 7-2 with the win and will now look ahead to next Friday’s matchup with the 7-2 Winfield Generals in a road contest to conclude the West Virginia 2019 football regular season.

The winner of this contest will receive a much higher rating in the final WVSSAC Playoff Ratings and in turn would play a much easier first-round opponent.

Kickoff against the Generals is slated for 7 p.m.