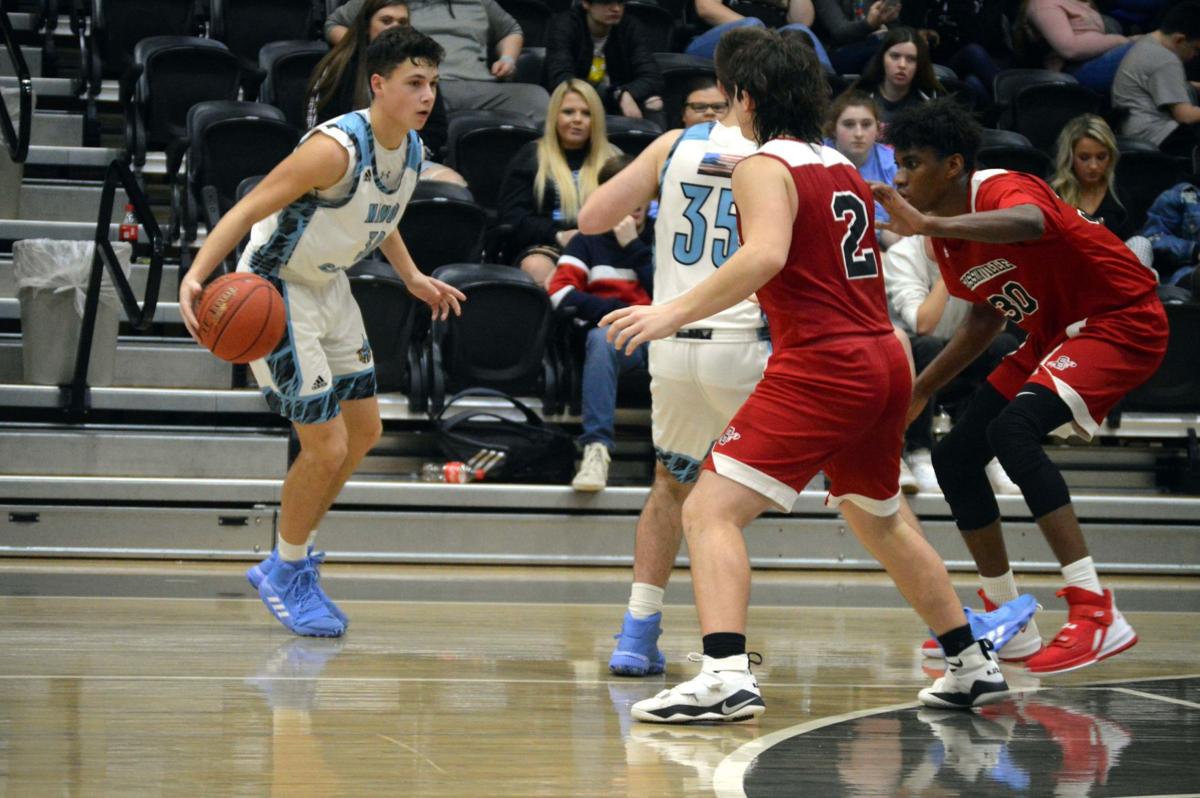 Jarrid McCormick/Williamson Daily News Mingo Central’s Devin Hatfield comes off a screen during the Miners 77-57 win over Sissonville on Tuesday, Jan. 14, 2020 inside the MCHS Gymnasium. 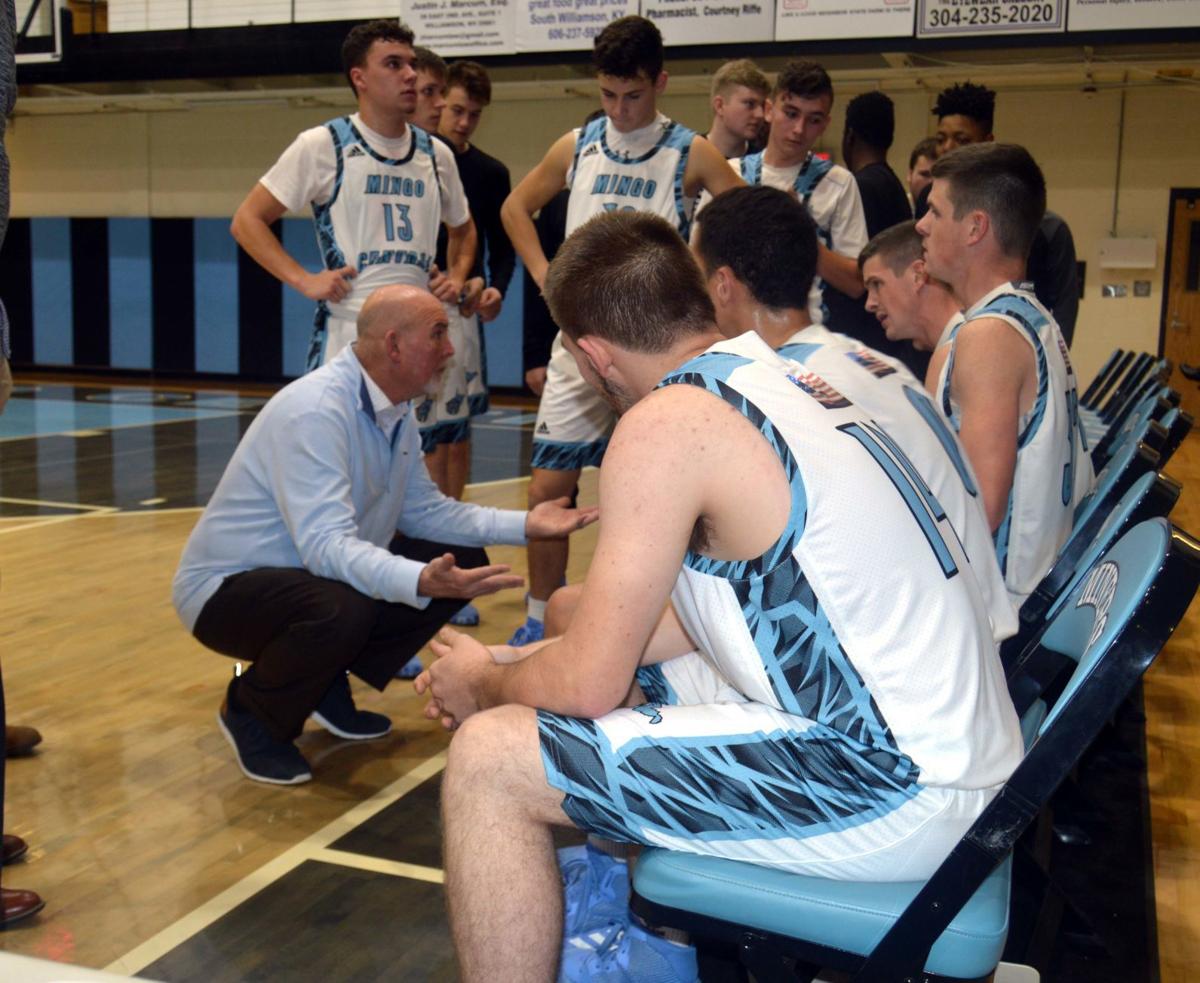 Mingo Central coach Stan Elkins talks with his team during a timeout in the Miners’ 77-57 win over Sissonville on Jan. 14 inside the Mingo Central High School Gymnasium.

Jarrid McCormick/Williamson Daily News Mingo Central’s Devin Hatfield comes off a screen during the Miners 77-57 win over Sissonville on Tuesday, Jan. 14, 2020 inside the MCHS Gymnasium.

Mingo Central coach Stan Elkins talks with his team during a timeout in the Miners’ 77-57 win over Sissonville on Jan. 14 inside the Mingo Central High School Gymnasium.

NEWTOWN — The Mingo Central Miners picked up a pair of Cardinal Conference wins this past week as they cruised past Sissonville 77-57 at home and then defeated Herbert Hoover on the road in a 51-48 win.

In the game against the Indians on Tuesday, Jan. 14, the Miners took the lead early on in the contest and never looked back. Four different players scored for coach Stan Elkins’ club in the opening period as they were paced by senior Drew Hatfield’s seven points and Devin Hatfield’s five as they took a 17-13 lead after one.

In the ensuing second period, the blue-and-white took full control of the game as they outscored the Indians 24-12 to take a 39-25 halftime lead. Sophomore Jarius Jackson came alive and dropped in eight points in the period while Drew Hatfield chipped in six more and senior Josh Wellman scored all five of his points in the frame.

Central continued to pour it on in the second half as they outscored Sissonville 21-14 in the third quarter to take a 21 point lead into the fourth at 60-39.

Jackson scored eight more points in the third quarter while junior Colton Blankenship scored all seven of his points in the frame.

Midway through the fourth quarter with the Miners holding a commanding 20-plus point lead, both coaches emptied their benches for the remainder of the game.

Sophomore Ashton Deskins got into the scoring column for MCHS in the closing minutes as he drilled a long three to help them reach the final margin of 77-57.

Jackson and Drew Hatfield led the Miners in scoring as they each dropped in a game high 19 points. Hatfield connected on four 3-pointers while Jackson did all of his damage inside the arc netting eight 2-point field goals.

Senior Nathan May followed them with nine points off the bench, seven in the fourth quarter, and Devin Hatfield followed him with eight.

The Miners had 10 players in total land in the scoring column, as Blankenships’ seven points, Ethan Evans and Wellman’s five points, Deskins’ three points, and a free throw by Justin May and Nick Joplin rounded out the scoring.

Mingo Central made 10 3-pointers in the game while Sissonville connected on eight. The Indians only made 9-16 free throws while the Miners made 9-12.

MINGO CENTRAL 51, HERBERT HOOVER 48 (Jan. 17): The Mingo Central Miners picked up a come from behind road win at Herbert Hoover on Friday night as they overcame an extremely slow start to pull out a 51-48 victory.

The Miners got off to a frigid start from the floor as they could not buy a bucket in the opening minutes and fell behind by double-digits as the Huskies jumped ahead to a 11-0 lead to start the game.

Head coach Stan Elkins’ club finally got on the board before the end of the period but still trailed by 11 going into the second frame as the home team held a 16-5 lead.

In the ensuing second quarter, it was the Huskies who went cold from the floor as the Miners held them to only seven points as they scored 14 of their own to claw their way back to within four at 23-19 going into the break.

Coming out of the halftime locker rooms, the two clubs trade baskets back and fourth as they each netted 14 points in the third as the Huskies held a 37-33 lead going into the fourth.

Trailing by four going into the final eight minutes of play, the Miners needed to make some plays down the stretch to come back and take their first lead of the game.

They did just that as seniors Drew Hatfield and Nathan May carried MCHS down the stretch and they rallied for the 51-48 road win.

Hatfield and May each scored 16 points in the game to lead the Miners as Hatfield tallied eight in the final period and May dropped in seven.

Jarius Jackson just missed landing in double figures as he scored nine points while Devin Hatfield followed him with seven. Jacob May tossed in a bucket off of the bench while Josh Wellman tallied a free throw to round out the scoring for MCHS.

The Huskies were led by Grant Bonner’s 14 points while Trey Chapman followed him with 13.

The Miners only connected on three 3-point field goals in the game while Herbert Hoover drilled five. The Miners hit 8-10 free throws in the game, including 5-6 in the decisive fourth quarter. Hoover only hit 7-14 attempts.

The pair of wins for the Miners improves them to a four game winning streak a they jump their record to 7-3 for the season and 5-3 in the Cardinal Conference.

They were back in action last night at rival Tug Valley in the “Battle of Bloody Mingo”, but scores and stats were not available by press time. Tug Valley led the all-time series 15-2 going into that matchup.

The Miners will be back in action on Thursday in an important sectional contest at home against the Man Hillbillies and then they will hit the road on Saturday and play at Westside. Both of those games are scheduled for a 7:30 p.m. tip.