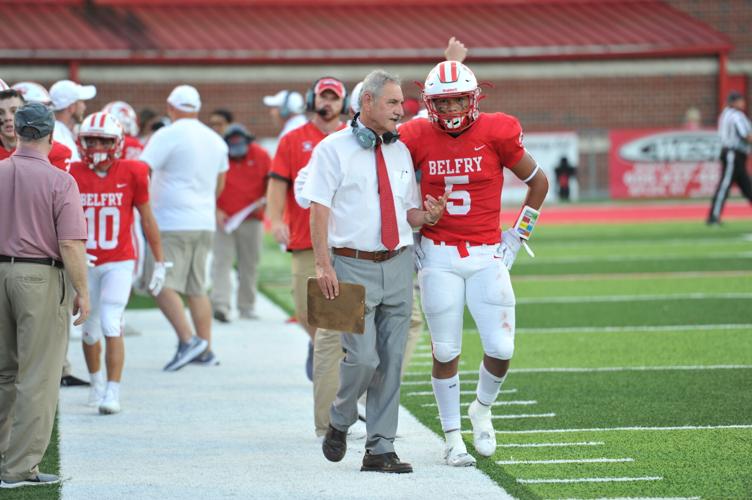 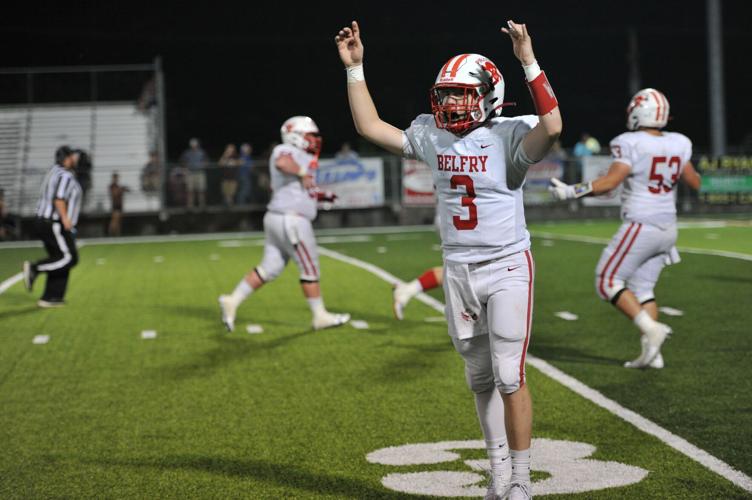 Belfry freshman QB Chase Varney pumps up the Pirate crowd during their win against Bourbon County.

Belfry freshman QB Chase Varney pumps up the Pirate crowd during their win against Bourbon County.

GOODY, Ky. — Belfry and Louisville Central met up for another classic clash on the gridiron at Haywood Stadium on Friday night as the Pirates were able to come away with the thrilling 24-21 win on a last-second field goal from senior kicker Aidan McCoy.

“I was really proud of our kids and coaching staff,” longtime Belfry coach Philip Haywood said after the win. “We played really hard, and we still made quite a few mistakes, but we were certainly better than the prior week.

The game was back and forth all night long as the two squads traded blows from the opening kickoff with Belfry striking first on the night as Dre Young rumbled into the end zone to give the Pirates a 7-0 lead with 8:30 left in the first quarter.

The Yellowjackets had answers to the early Belfry score on their next two possessions as Xavier Brown threw a TD pass to Amontez Woolfolk and then Cortez Stone ran in for a second score from 58 yards out. Both extra points were no good, but Central surged ahead to a 12-7 lead with 3:43 left in the opening quarter.

After back-to-back drives where they came up empty, the Belfry offense got rumbling again on their final drive of the first half as Caden Woolum sprinted to the house for a 51-yard touchdown and McCoy’s PAT put the ‘Bucs on top 14-12 with 1:55 left in the half.

That lead was short lived for Belfry, however, as Central retook the lead going into the half as a 30-yard field goal from Cyril Moussa-Tchouta put them on top 15-14.

The Pirates did not get off to a great start on offense in the second half as they had to punt on their first possession and then fumbled the ball away in their own territory on their next two touches.

The Big Red defense stood strong, however, as they forced Central to turn the ball over on downs two times in the third quarter to keep the score at 15-14.

“We told our kids all week that our defense was going to have to play big to give our offense a chance, and they did,” Haywood said. “They made several critical stops, especially in the third quarter to get us the ball back after we had couple of turnovers. I think that was a big key to the game.”

The Yellowjacket offense was eventually able to crack through the Belfry defense again as early in the fourth quarter Brown scrambled into the end zone from five yards away, but the PAT was once again no good as Central took the 21-14 lead with 11:51 left in the game.

Needing to go on a drive to tie the game, coach Haywood’s club did just that as they put together one of their patented long drives and went 71 yards down the field in 13 plays as Young capped it off with a 3-yard dive into the end zone. McCoy’s PAT was true, and Belfry tied the game up at 21 all with 6:22 left.

On the ensuing kickoff the Central return man slipped as he was fielding the ball and was downed at his own eight yard line. The Belfry defense capitalized on the miscue as they forced the Jackets into a 3-and-out and made them punt from deep in their own territory.

Belfry got the ball back near midfield at their own 44-yard line with 5:04 on the game clock and was in no hurry as they began milking the remaining time and moving into Central territory.

With Belfry facing a fourth down and inches inside their own 10-yard line and the time winding down, coach Haywood elected to run the time all the way down to less than 10 seconds left and kick the field goal.

McCoy strutted out on the field and drilled the first field goal attempt from 26-yards out, but the play was called dead as Central was flagged for an offsides, which gave Belfry a first down.

Belfry had no timeouts remaining, so Haywood elected to still kick the field goal, and McCoy drilled the game winner for a second time as the Pirate faithful erupted.

“We have a lot of confidence in him (McCoy) and didn’t hesitate at all to go for the field goal and have him kick it twice,” Haywood said. “We just had to snap it right and block in there, and our kids executed it very well.”

The Jackets still had 4.8 seconds on the game clock to work with, but Brown’s last second heave was picked off by Woolum as Belfry secured their second win of the season.

Belfry outgained Central in yardage on the day as they ran for 335 yards on the ground on 53 carries. The Jackets gained 266 yards in the game with only 134 of those coming on the ground

“They had a really good tailback, he busted us last year. And we knew that for us to be able to win the game we had to stop their running game,” Haywood said. “We really concentrated on taking the run game away as much as we could, he still got us some. ... But our front seven played the run much better last night, and that was a big key to the game.”

“Offensively, our line came off the ball well all night long,” Haywood said. “When we play Central, it’s always going to be a battle in the trenches, and I feel like our kids really rose to the occasion last night.”

Stone ran for 134 yards on 27 carries to lead the Jackets while Brown finished 10-19 passing for 132 yards and an interception. Freshman Aidan Burke picked off the pass for Belfry.

The win for Belfry improves them to 3-6 all-time against Central with all games coming since 2007. This was the Jackets’ first ever trip to Pond Creek.

Belfry improved to 2-2 on the season and will now turn their attention to rival and defending Class A champion Pikeville Friday night. The Panthers and the Pirates have a storied rivalry as this will be the 79th meeting between the two schools.

Belfry narrowly leads the all-time series 39-37-2 but its the Panthers who have had the upper hand of late as they have won the past three games in the series.

“That’s always a big game, especially in this area,” Haywood said. “We’ve got a lot of improving to do before we go to Pikeville.”

Kickoff is set for 7:30 p.m. on Friday night at the W.C. Hambley Athletic Complex.