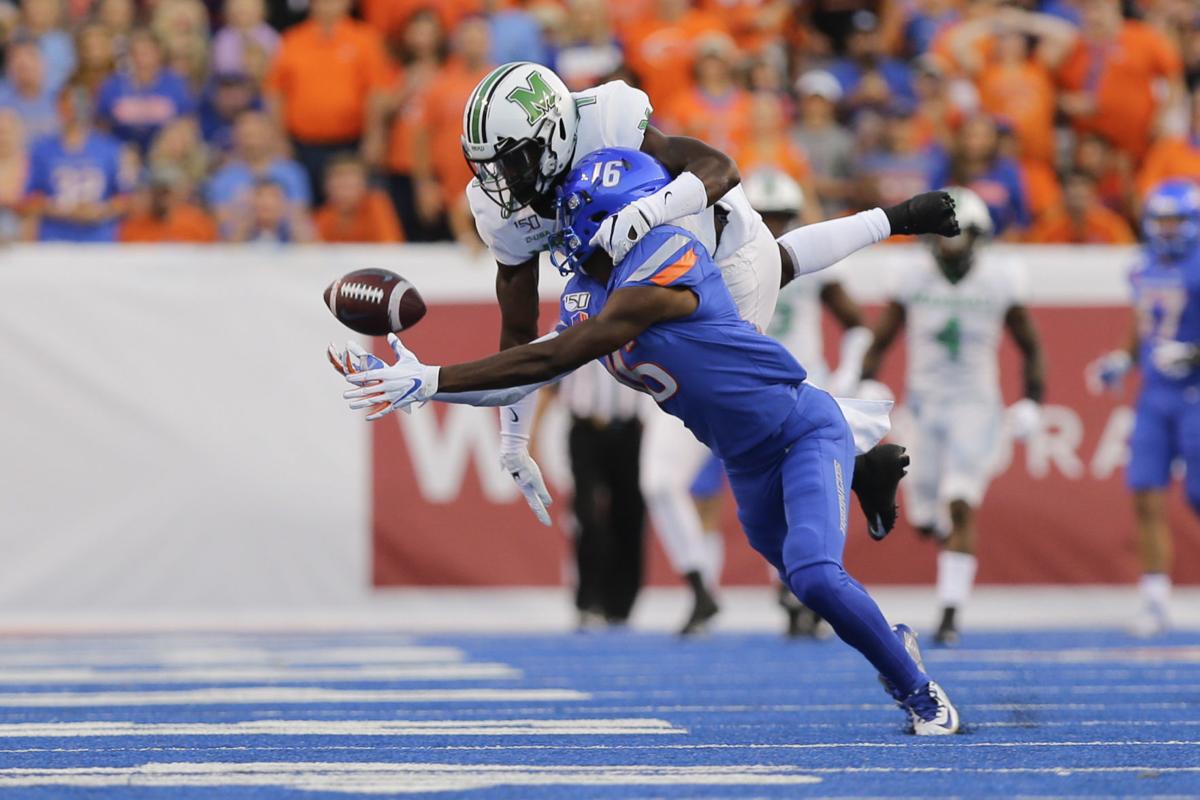 Boise State wide receiver John Hightower (16) and Marshall defensive back Jaylon McClain-Sapp fight for a pass in Boise, Idaho, in 2019. 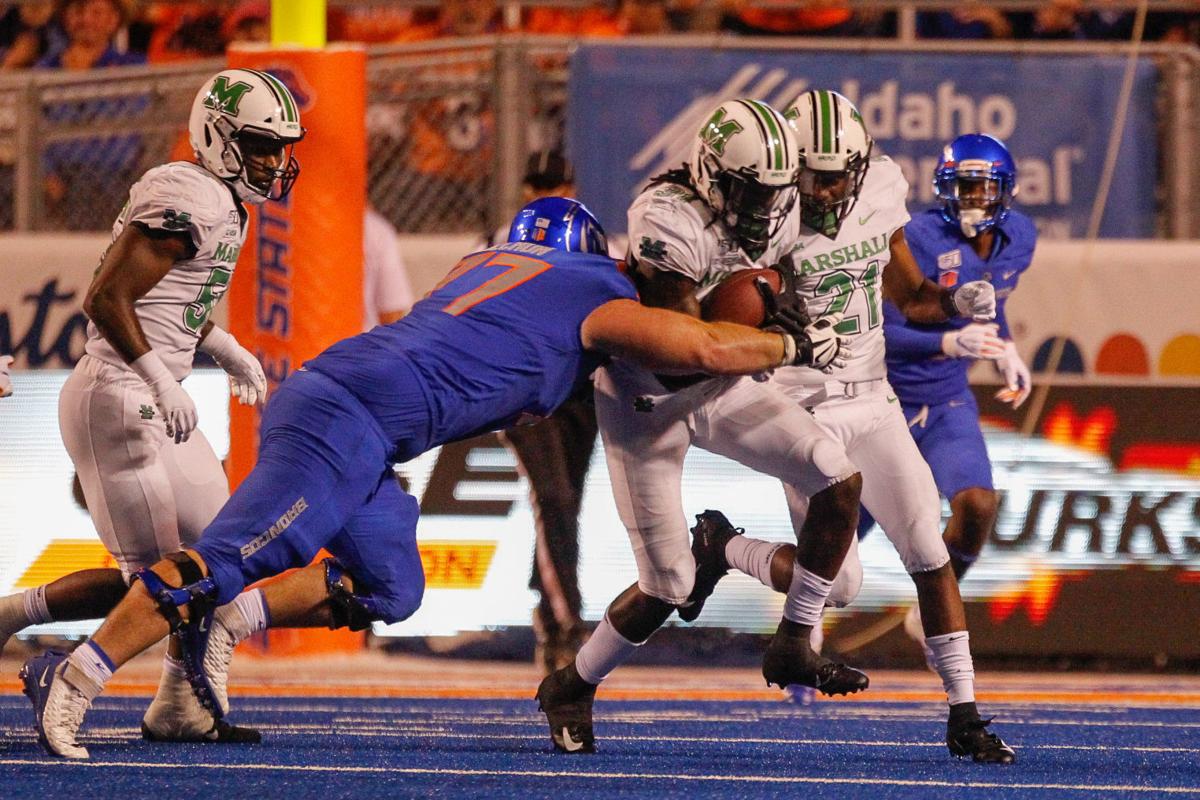 Marshall linebacker Omari Cobb returns an interception during the second half of an NCAA football game against Boise State. 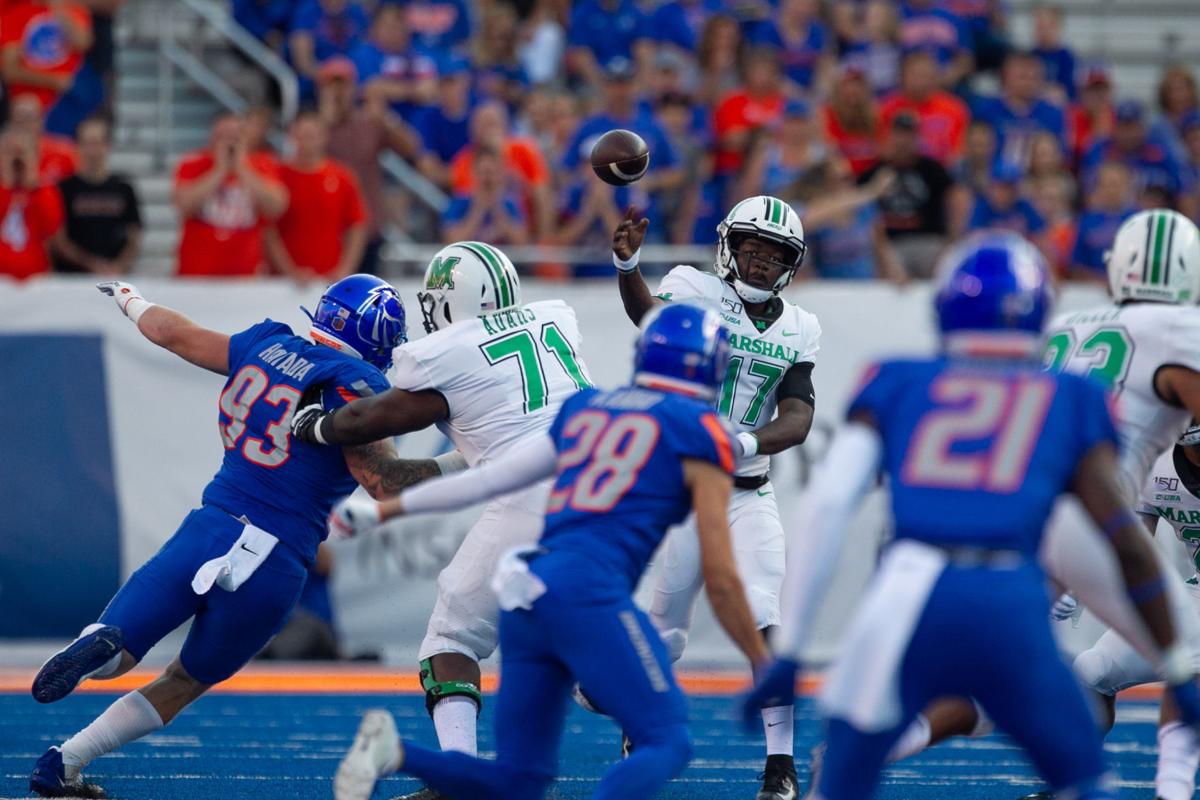 Marshall quarterback, Isaiah Green steps up to pass during first half action against Boise State. 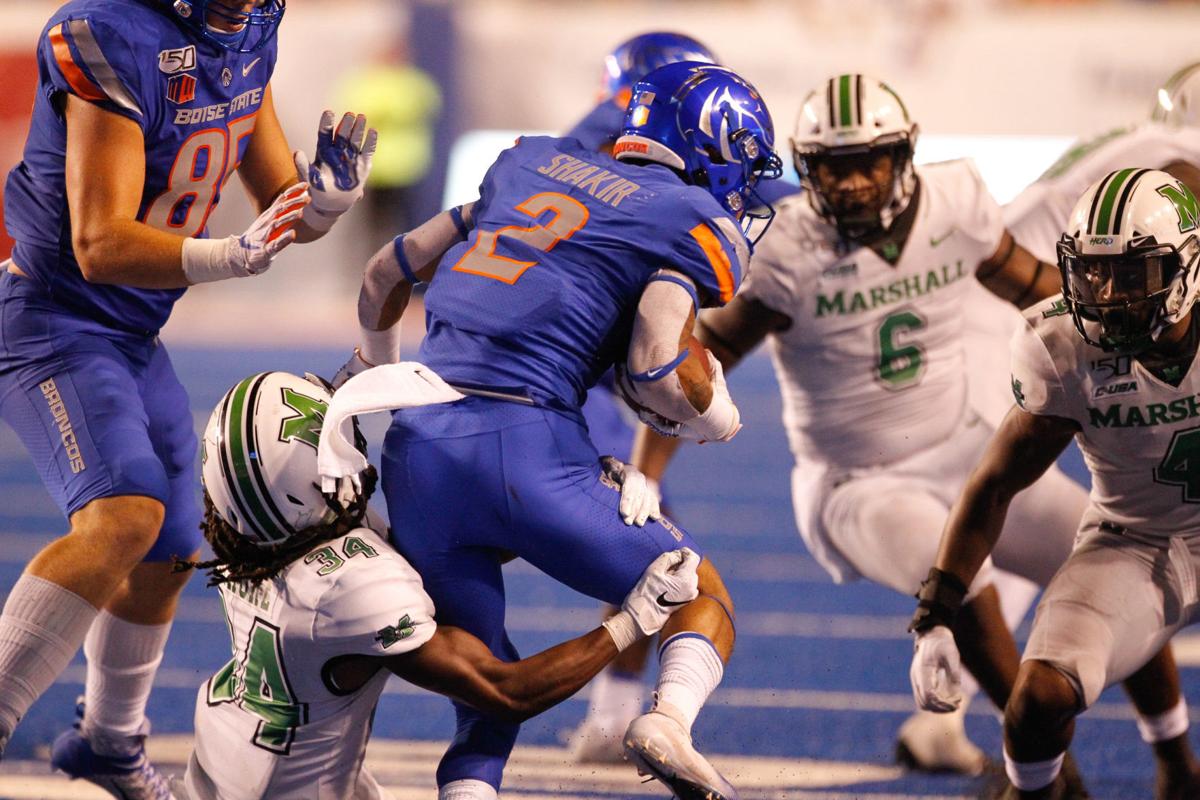 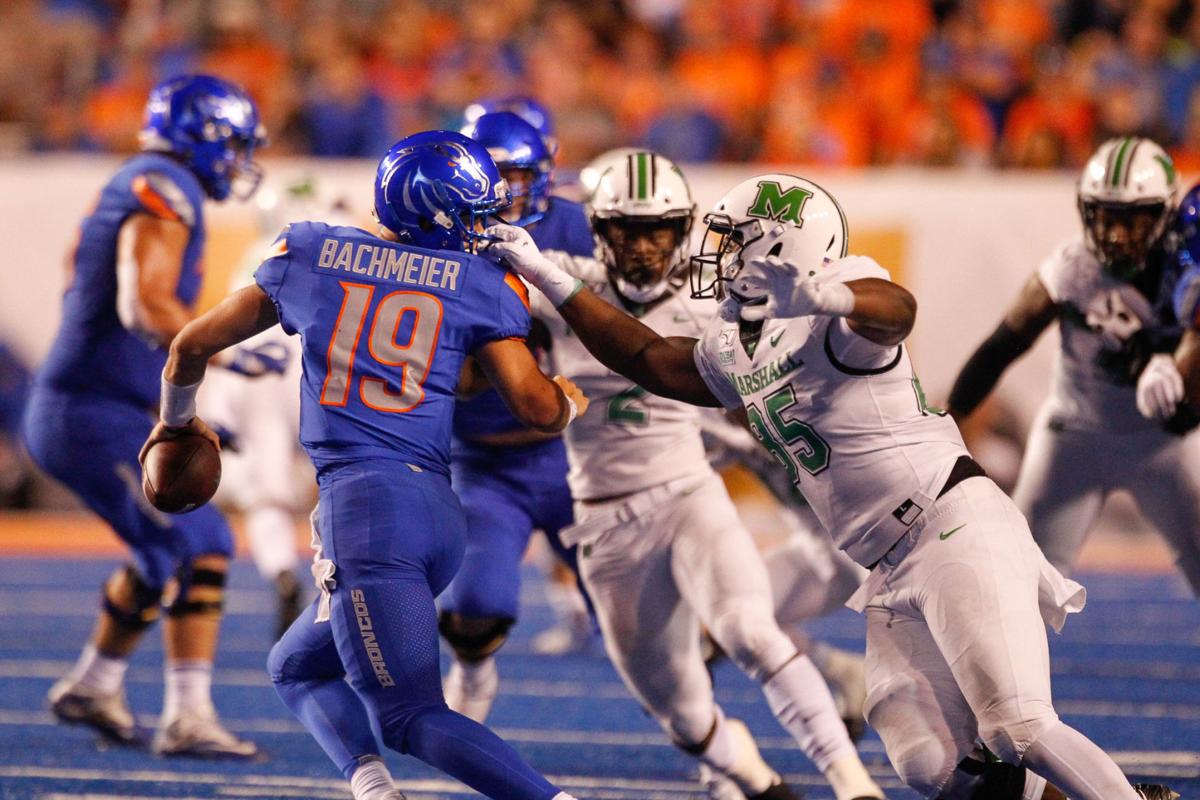 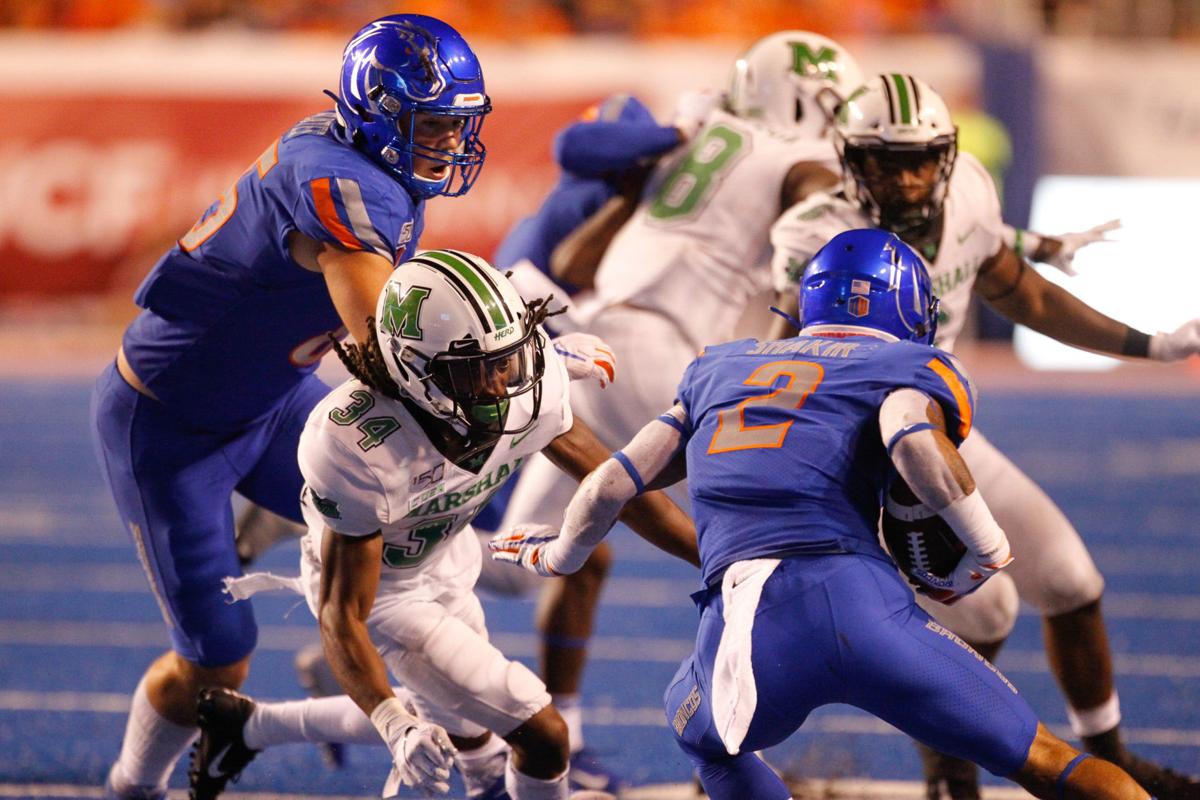 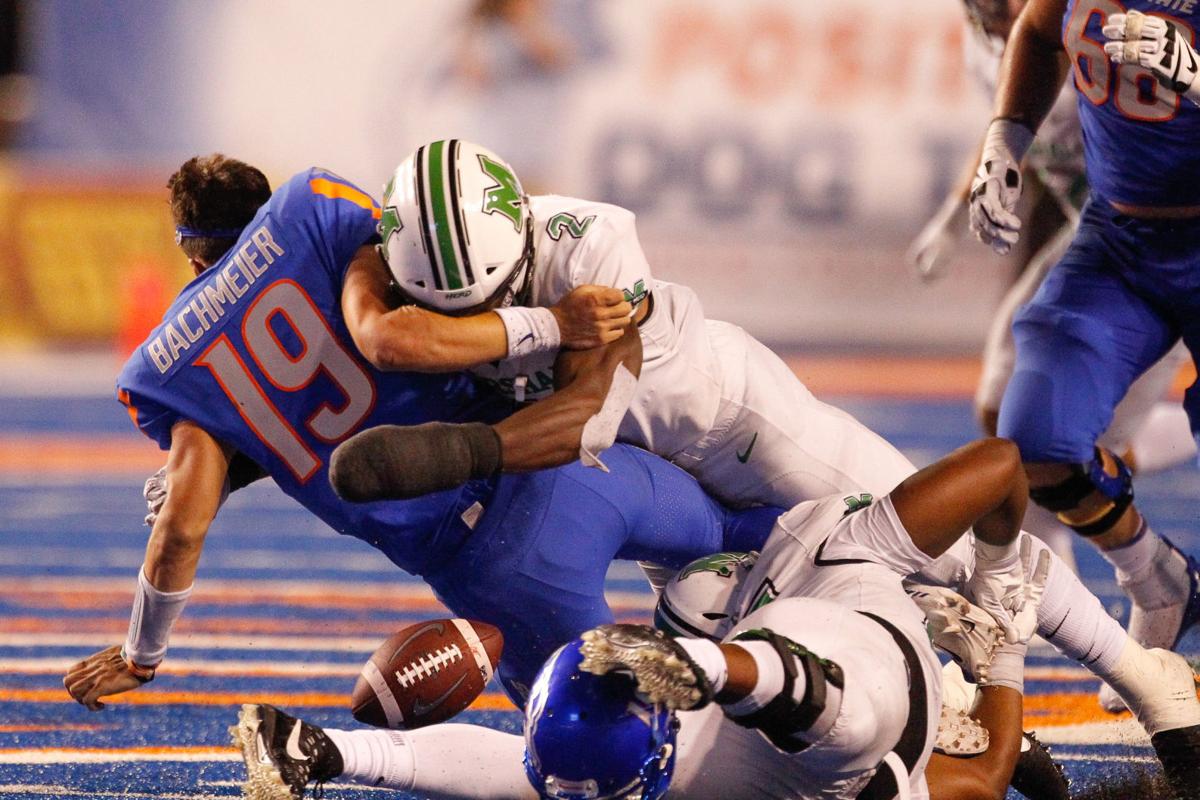 Marshall linebacker, Darius Hodge dives over Boise State quarterback Hank Bachmeier to get the ball during second half action against Boise state.g

Boise State wide receiver John Hightower (16) and Marshall defensive back Jaylon McClain-Sapp fight for a pass in Boise, Idaho, in 2019.

Marshall linebacker Omari Cobb returns an interception during the second half of an NCAA football game against Boise State.

Marshall quarterback, Isaiah Green steps up to pass during first half action against Boise State.

Marshall linebacker, Darius Hodge dives over Boise State quarterback Hank Bachmeier to get the ball during second half action against Boise state.g

EDITOR’S NOTE: This is the fourth installment of a 12-part series previewing Marshall’s 12 football opponents for the 2020 season. Today, we look at the fourth opponent on Marshall’s schedule: Boise State.

HUNTINGTON — In terms of consistency in the last two decades, it is hard to find anyone better than the Boise State Broncos.

Since 2000, Boise State has never finished below the eight-win mark and they’ve only had four seasons during that span in which they finished with fewer than 10 wins.

They are the standard for the Group of Five and are poised to be labeled as such again in 2020.

Head coach Bryan Harsin’s team returns talent, but there were several areas in which the team was young that could’ve used spring practice to iron out some of the wrinkles.

With COVID-19 putting a stop to spring drills, it will be on the Broncos and Harsin’s staff to find the right cohesion if they are to again ascend to the top of the Mountain West Conference and the Group of Five.

Boise State finished 12-2 last season and a perfect 8-0 in the Mountain West Conference, but that didn’t keep there from being some hiccups along the way.

Hank Bachmeier started as a true freshman quarterback for the Broncos, but a hip injury forced Boise State to use three separate quarterbacks in extensive time during the season.

If Bachmeier struggles again, Harsin won’t hesitate to put Cord into the mix.

The good news for both quarterbacks is that the Broncos have a strong skill set around them.

Holani finished with 1,014 yards rushing and seven touchdowns while Mahone added 425 yards on the ground and six touchdowns.

While the skill set returning is solid, the most work is needed in the trenches where the Broncos return just one player with extended experience — that being tackle John Ojukwu who started all 11 games in which he appeared last season.

Other than Ojukwu, the line is extremely limited in experience. Some guys who will have to step up include Jake Stetz (four career starts) and Kekaniokoa Holomalia-Gonzalez, who will be called on to take over the center spot.

Last season, the Broncos averaged 429 yards and 34.7 points per game — the latter of which was 19th nationally.

The success or failure of the offense depends on whether the inexperienced offensive line can mesh in a limited time-frame before the start of the 2020 season.

Just as the offensive line is inexperienced, the defensive front is also rebuilding as Boise State looks to the opposite side of the football.

All four starting defensive linemen from 2019 are gone, most notably Curtis Weaver, who was drafted by the Miami Dolphins in the 2020 NFL Draft, and David Moa.

There will be a bit of a drop-off in production off the edge, but there are a couple of players who could rise up and aid the defensive front early: nose tackle Scale Igiehon (38 tackles, 3 TFL) and hybrid edge rusher Demetri Washington (34 tackles, 5.5 TFL, 4.5 sacks).

The lack of pressure up front may mean more blitz looks at the linebacker and secondary levels where there is talent and experience to aid in getting pressure on the opposition.

Safety Kekaula Kaniho may be the best returning defensive player the Broncos feature. The senior nickelback finished 2019 with 61 tackles, 11 tackles for loss and three sacks while doing a bit of everything for the Boise State defense.

Linebacker Riley Whimpey also is back after leading the Broncos in tackles last season with 83. Whimpey also had seven tackles for loss and seven pass breakups.

Cornerback Avery Williams had a down year statistically last season, but much of that was due to the respect the opposition had for him, which forced many teams to go away from his side in the passing game.

Williams also brings a key special teams dynamic to the table, having scored on a pair of punt returns while also blocking two kicks last season.

Boise State’s two-decade run of success has prompted many publications to place them in the top-25 leading into the 2020 season, and there is plenty of reason to do so with solid talent returning in each phase.

However, the lack of experience in the trenches on each side of the ball combined with the cancellation of spring drills means that, early on, the Broncos are going to be a work-in-progress until they find the right fit along the line.

The schedule especially plays into the concerns for the early portion of the 2020 season with a four-week stretch to open that is going to test the Broncos.

The 2020 season starts with a home date against Georgia Southern, followed by a road date to open Mountain West play at Air Force.

On paper, those should be wins for the Broncos and potentially-decisive ones, except for one X-factor.

Those two games feature two of the nation’s top rushing teams in 2019 (Air Force, No. 2; Georgia Southern, No. 7). With a defensive front replacing all four starters, that makes for a tough opening stretch.

Those two contests are followed by a home date with ACC foe Florida State on Sept. 19 and a tough cross-country road trip to Marshall on Sept. 25 for a Friday night affair just six days later.

It makes for a slippery physical and mental start with four games in 20 days that will test the toughness of the Broncos.

If Boise State is to keep its stance as the Group of Five’s top program, it will have to come out of the gates playing like it in September.