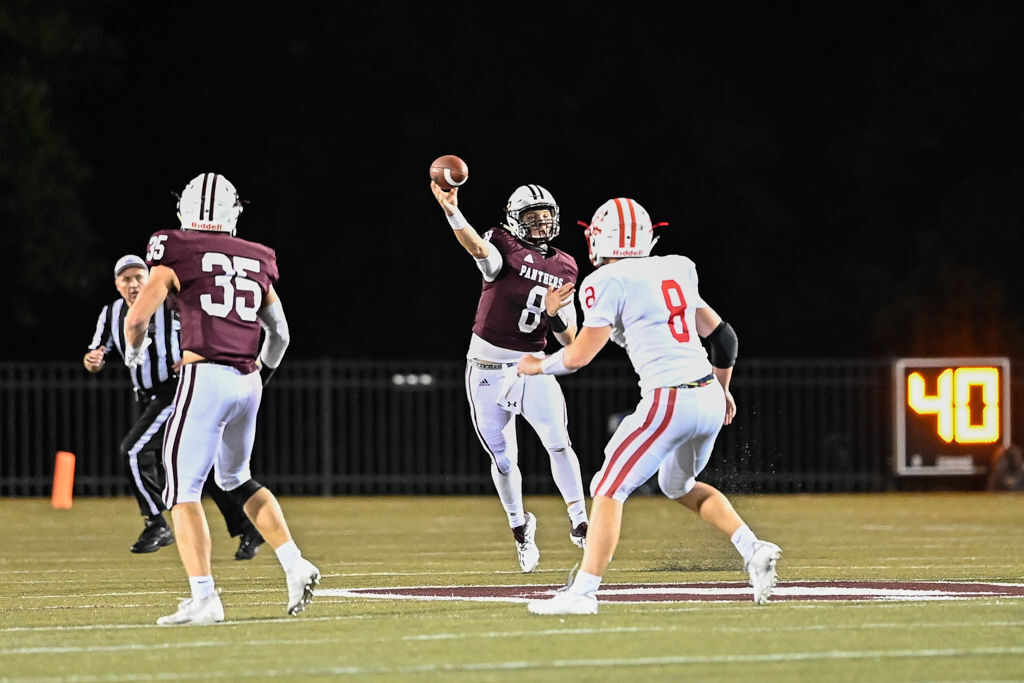 Pikeville QB Isaac McNamee slings a pass while Belfry sophomore Neal Copley chases him during the Panthers 20-14 win over the Pirates on Friday at the H.C. Hambley Athletic Complex. 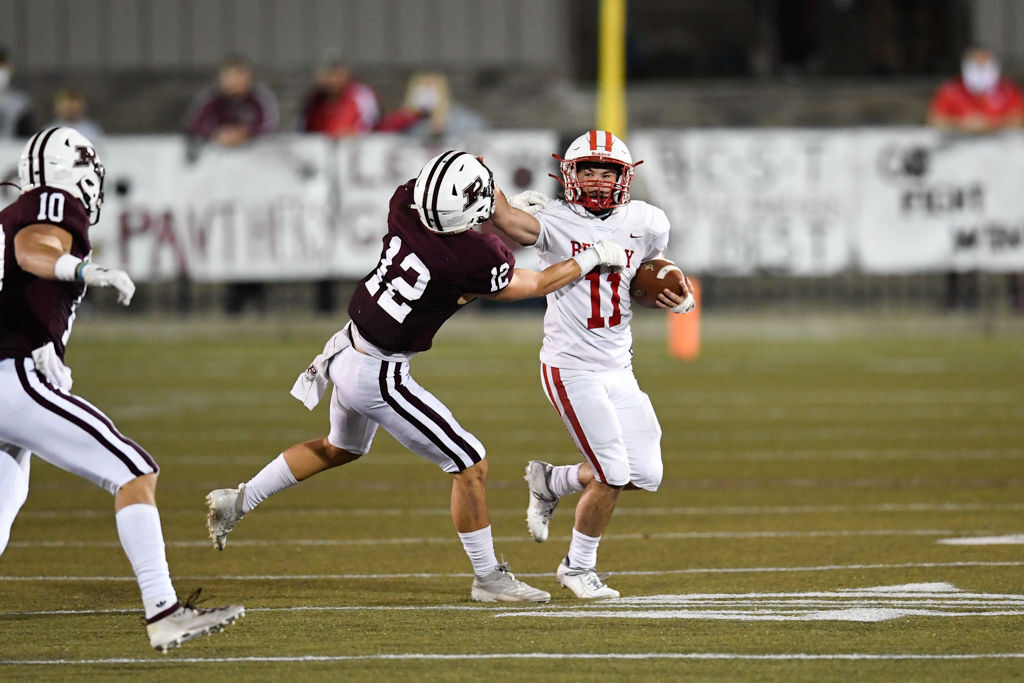 Pikeville QB Isaac McNamee slings a pass while Belfry sophomore Neal Copley chases him during the Panthers 20-14 win over the Pirates on Friday at the H.C. Hambley Athletic Complex.

PIKEVILLE, Ky. — For the first time since the 1999-2000 football seasons the Pikeville Panthers picked up their second consecutive win over cross-county rival Belfry by winning a 20-14 slug-fest on Friday night at the H.C. Hambley Athletic Complex.

The Pirates (1-1) came out of the locker room swinging as they forced a Pikeville punt on the first Panther possession and then mounted a three-play scoring drive capped off by an eight yard TD run by Isaac Dixon. The PAT was good by Gideon Ireson and the Pirates took the 7-0 lead with 6:19 in the first.

The big play on the drive was a 61-yard rush by junior Brayden Rash which put the Pirates in the red-zone. Bad news for Pirate fans however, as Rash injured his collarbone on the play and missed the rest of the game.

After being shutout on their first possession, the Panthers (2-0) answered on their second drive as they went seven plays and 78-yards and found the endzone on a three yard run by sophomore Blake Birchfield.

The PAT was blocked however by senior Tyler Chaffin and Belfry held onto the 7-6 lead with 2:37 left in the first.

On the second Belfry possession, the Pikeville defense looked poised for a stop as they forced a 3rd and long but BHS head coach Philip Haywood dialed up a pass play and QB Brett Coleman found Dixon streaking down the field and he took it to the endzone for a 68-yard score.

Ireson’s PAT spit the uprights and the Pirates held the 14-6 lead with 1:05 still left in the first.

Looking to answer once again coach Chris McNamee’s club put together a long drive that was 12 plays long and ate up over seven minutes of game clock.

The Panthers came up empty on the lengthy drive however as the “Big Red” defense came up strong and forced a turnover on downs to give the ball back to their offense with just over five minutes left in the half.

The Pirates made a costly mistake however as on the first play from scrimmage Dixon put the ball on the tough after taking a tough hit and Birchfield scooped it up for PHS and took it 20-yards for the touchdown.

Birchfield also powered across the two-point try and the Panthers tied the game up at 14 apiece, which was the score heading into the halftime locker rooms.

Coming out of the break, the Pirates got the ball first and looked to regain momentum in the game. They put together a lengthy drive that lasted 14-plays and over six and a half minutes, but the Pikeville defense stood strong again and forced a turnover on downs with 5:11 left in the third.

With the game still knotted up at 14, the Panthers mounted a lengthy drive of their own as they looked to take their first lead of the game.

PHS picked up the go-ahead score early in the 4th quarter as junior QB Isaac McNamee found receiver Zac Lockhart open in the endzone with 10:51 to play.

The PAT try was wide-left, but PHS took the 20-14 lead with 10:21 to play. The Pikeville scoring drive was 15-plays and spanned 78-yards, as they once again ate up seven minutes of game clock.

Now playing from behind, the Belfry offense looked to play with a sense or urgency as they moved the ball into Pikeville territory.

PHS stood strong once again however as they forced another turnover on downs, their third of the game, and took control of the ball with 3:30 to play.

Needing just one first down to ice the game away, the Panthers did just that as Birchfield sped around the right side to secure the win for Pikeville.

Dixon was the majority of offense for the Pirates as he totaled 73 yards rushing and 68 yards receiving to go with two touchdowns.

Brayden Rash had 61 yards rushing on one carry before leaving the game with injury while brother Brenden Rash had 26 yards on only four carries.

Fullback Kyle Webb struggled finding any running room on the night as he picked up 31 yards on 10 carries, while Coleman picked up 27 yards on eight carries.

In the passing game Coleman completed 2-6 passes for 75 yards and the touchdown strike to Dixon.

Birchfield did the majority of the damage for the Panthers as he toted the rock 25 times and totaled 126 yards and one touchdown to go along with his scoop-and-score on the defensive side of the ball.

McNamee finished 7-11 passing for 94-yards, one TD, and no interceptions.

The win for Pikeville improved them to 2-0 in 2020 and was their 17th consecutive win dating back to last season, as McNamee remained undefeated as the starter.

The win also marked the second consecutive win for the maroon-and-white over the Pirates for the first time since the 1999-2000 seasons.

Belfry falls to 1-1 with the loss and sees their six game winning streak come to an end. The Pirates are back in action this Friday as they head on the road and play at District foe Magoffin County in a 7:30 p.m. kick.