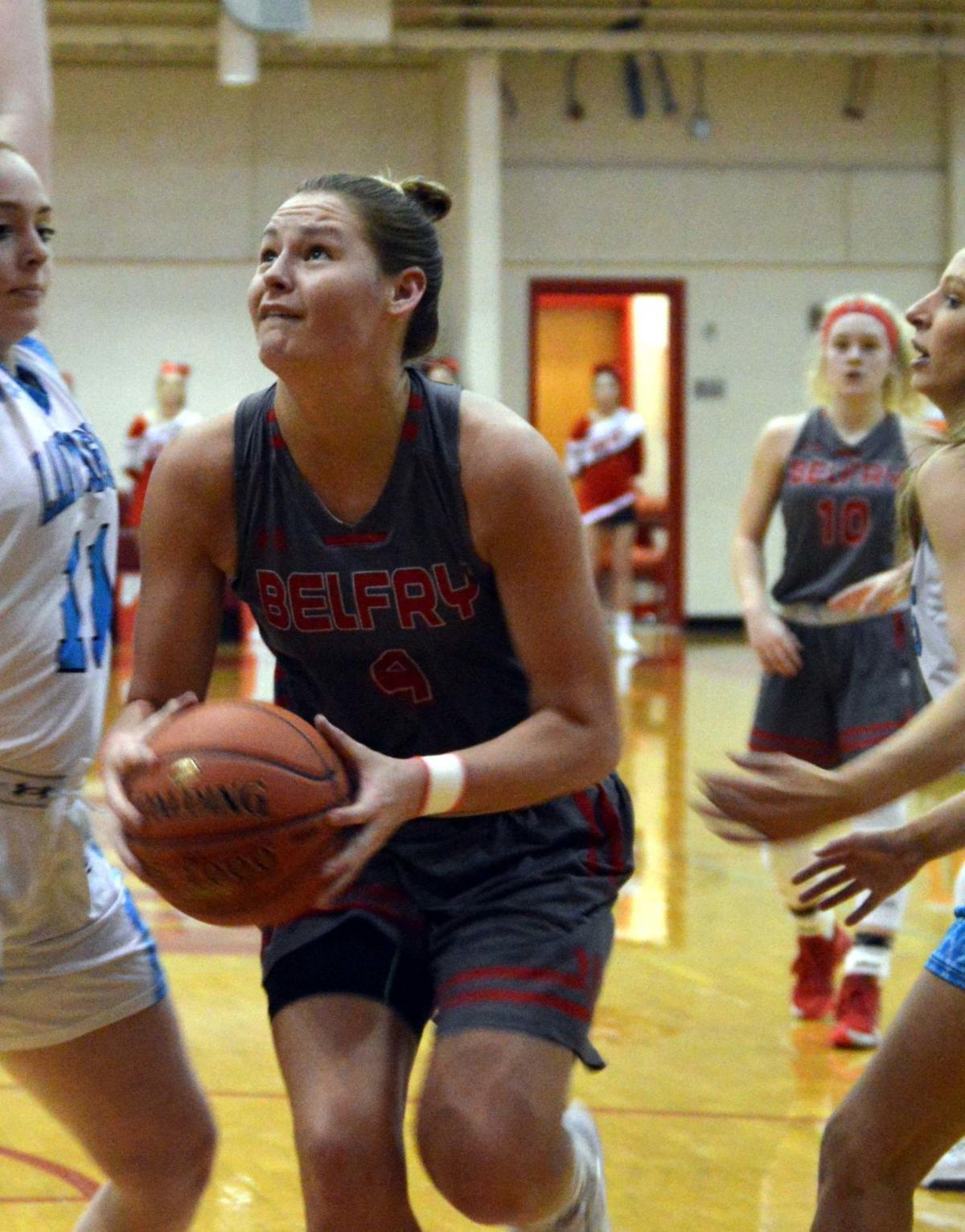 Belfry senior Katie Ball looks to the basket for a shot in a game earlier in the 2019-20 season inside the Belfry High School gymnasium. 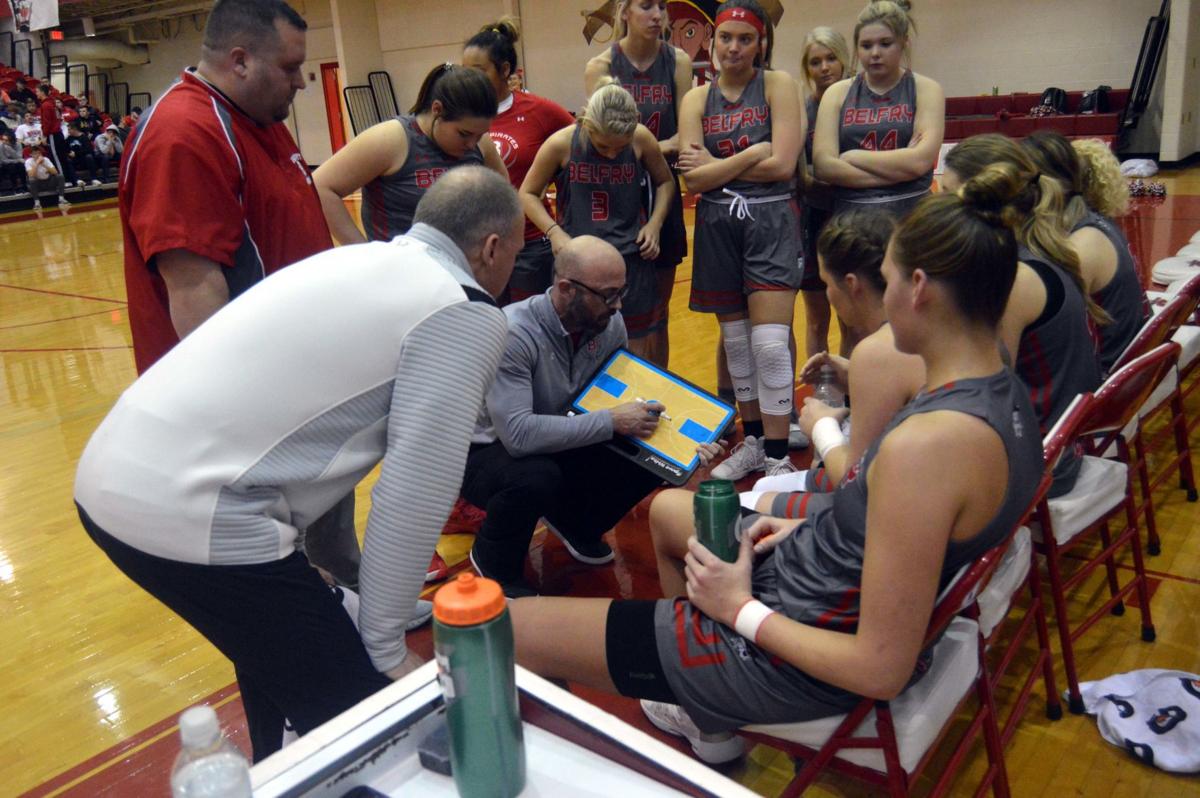 Belfry head coach Kevin Deskins goes over a play with his team during a timeout in a game earlier this season at the Belfry High School gymnasium. 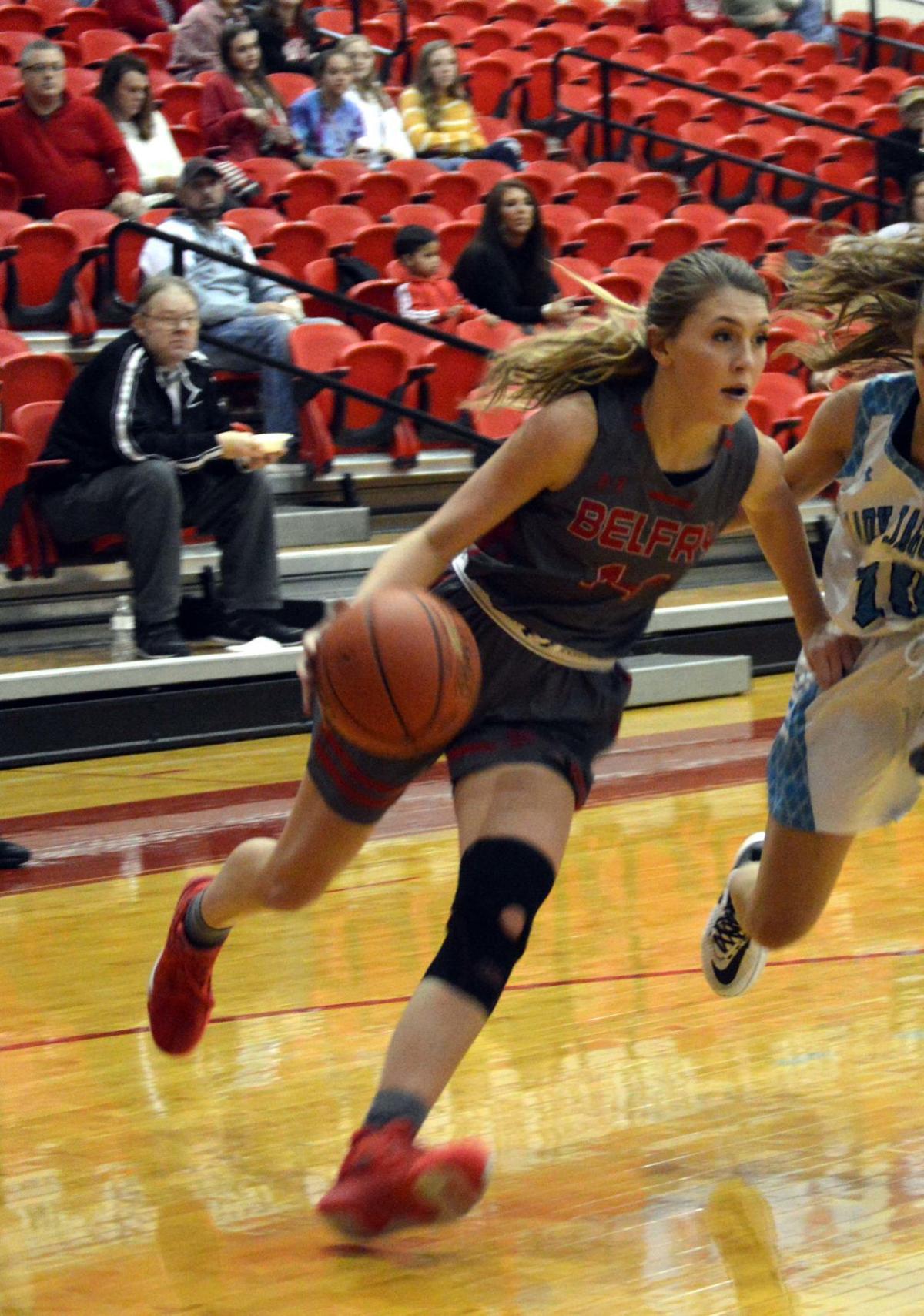 Jarrid McCormick/Williamson Daily News Sophomore Cushi Fletcher drives to the basket in a game against Floyd Central earlier this season inside the BHS Gymnasium.

Belfry senior Katie Ball looks to the basket for a shot in a game earlier in the 2019-20 season inside the Belfry High School gymnasium.

Belfry head coach Kevin Deskins goes over a play with his team during a timeout in a game earlier this season at the Belfry High School gymnasium.

Jarrid McCormick/Williamson Daily News Sophomore Cushi Fletcher drives to the basket in a game against Floyd Central earlier this season inside the BHS Gymnasium.

OWENSBORO, Ky. — The Belfry Lady Pirates run in the Kentucky Class AA State Championship came to a halt in the semifinals on Saturday night at the Owensboro Sportscenter as they were bested by the Mercer County Titans 69-33.

The loss came after the Lady Pirates defeated Warren East in the quarterfinal round by a final score of 54-47, thanks to a 33-point, 27-rebound performance from center Katie Ball which set up the clash against the Titans. In the contest against Warren East, coach Kevin Deskins’ club got off to a slow start to begin the game as the Lady Raiders had a 12-8 lead after the first quarter of play.

The Lady Pirates finally came around in the second quarter and outscored Warren East 15-9 to take a 23-21 lead into the halftime locker room.

Coming out of the break, the Lady Raiders rallied to take a five point lead with 5:30 to play in the third. But Belfry responded outscored their opponent by 11 points the rest of the quarter to take a 34-28 lead into the fourth.

In the final stanza, the Lady Pirates built their lead up to 11 with 6:02 to go in the game and was able to cruise the rest of the way and secure the seven point win.

Ball dominated the Lady Raiders as she connected on 12-23 field goal attempts and hit 8-11 shots from the foul line in route to her 33 points. 24 of her 27 rebounds were grabbed on the defensive end, and she also registered three blocked shots and two steals.

Sophomore Cushi Fletcher also reached double-figures as she finished with 12 points, including 2-2 from 3-point land. Kyera Thornsbury also added eight points for BHS while Linzee Phillips rounded out the scoring column with a free throw.

Lucy Patterson was the high scorer for Warren East, while Kelsey Sparks followed her with 12.

Belfry played lock down defense against the Lady Raiders as they held them to 16-63 shooting for a measly 25% shooting. The Lady Pirates hit 18-42 shots for a 43% clip.

MERCER COUNTY 69, BELFRY 33 (Jan. 18): The Belfry Lady Pirates did not fare well in the semifinal round of the Kentucky Class AA State Championship at the Owensboro Sportscenter, as they fell to the Mercer County Titans by a final score of 69-33.

The Lady Pirates were bit by the turnover bug in this contest as the Titans forced them into 30 turnovers with their pressure defense, which led to several easy baskets.

They were also able to limit Belfry’s Katie Ball to five points and nine rebounds despite her averaging 25.7 points and 14 rebounds coming into the tournament.

Sophomore Cushi Fletcher was the lone Lady Pirate to reach double-figures as she flipped in 11 points and eighth grade guard Kyera Thornsbury followed her with eight.

Alyssa Varney added five points off the bench while Linzee Philips and Kyra Justice each scored two points to round out the scoring for BHS.

Mercer County had four players land in double figures and were led by Channing Lewis, who finished with 18 points.

Ball and Fletcher were each named to the Kentucky Class AA All-Tournament following the game.

BELFRY 81, PRESTONSBURG 51 (Jan. 15): The Belfry Lady Pirates picked up a dominating home win on Wednesday, Jan. 15 against 15th region foe Prestonsburg as they cruised to the 81-51 victory.

Coach Kevin Deskins’ club won every quarter and posted 23 point quarters in both the second and the third stanzas.

Sophomore guard Cushi Fletcher also had a big game as she dropped 20 points against the Lady Blackcats and Kyera Thornsbury just missed double-figures as finished with nine points and also grabbed seven rebounds.

Phillips led the way with a game high nine assists.

The wins for the Lady Pirates improved them to 9-8 on the season and they were scheduled to be back in action on Monday in an important 60th District game against Phelps, but scores and stats were not available by press time.

Belfry will also play another important 60th District contest on Friday at Pike Central in a 7:30 p.m. start and will then return home to host Logan on Saturday in another 7:30 p.m. tip.