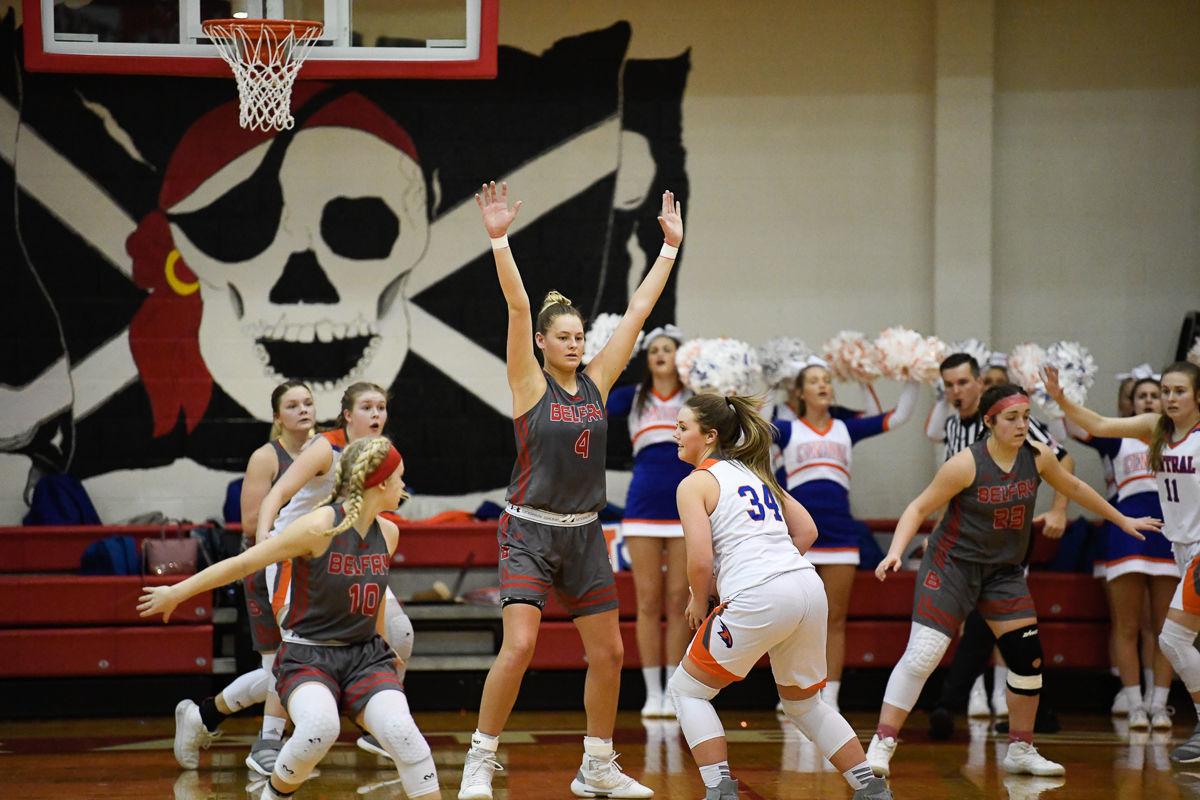 Ray Justice Photography Belfry’s Linzee Phillips (10), Katie Ball (4), and Keyera Thornsbury (23) lock down on the defensive end during the Lady Pirates 73-33 win over Pike Central in the Section 8 Championship game of the Kentucky 2A Tournament on Friday, Jan 10, 2020 inside the BHS Gymnasium. 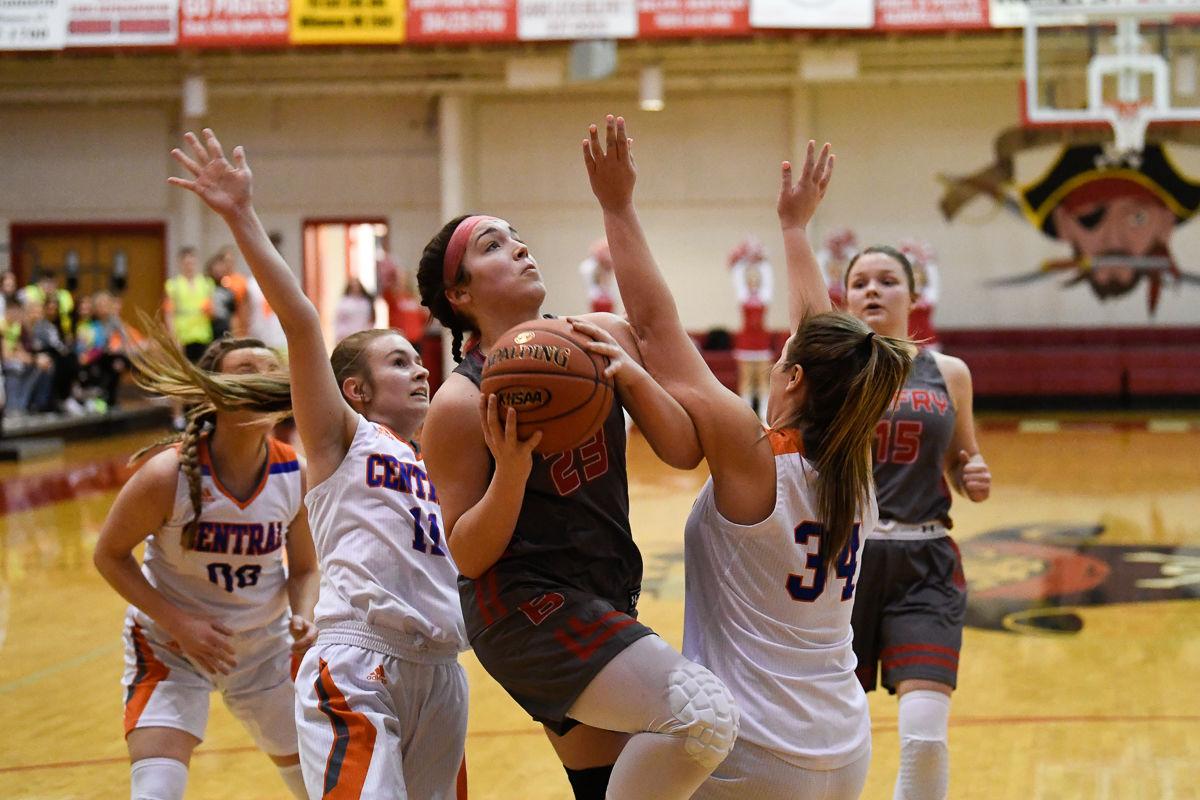 Belfry eighth-grader Keyera Thornsbury finishes through contact during the Lady Pirates’ 73-33 win over Pike Central in the Section 8 Championship game of the Kentucky Class AA Tournament on Friday inside the BHS gymnasium.

Ray Justice Photography Belfry’s Linzee Phillips (10), Katie Ball (4), and Keyera Thornsbury (23) lock down on the defensive end during the Lady Pirates 73-33 win over Pike Central in the Section 8 Championship game of the Kentucky 2A Tournament on Friday, Jan 10, 2020 inside the BHS Gymnasium.

Belfry eighth-grader Keyera Thornsbury finishes through contact during the Lady Pirates’ 73-33 win over Pike Central in the Section 8 Championship game of the Kentucky Class AA Tournament on Friday inside the BHS gymnasium.

GOODY, Ky. — The Belfry Lady Pirates secured their spot in the Kentucky Class AA State Tournament on Friday as they rolled past rival Pike Central by a final score of 73-33 in the Section 8 Championship game held at Belfry.

The Lady Pirates (7-7) wasted no time jumping all over the district foe Hawks as they raced ahead to a 20-4 lead after the first eight minutes to play. Pike Central won the second quarter 12-11, but still trailed 31-16 going into the halftime locker rooms.

Coming out of the break, head coach Kevin Deskins’ club put the game out of reach as they outscored the Lady Hawks, 25-10, to jump ahead to a commanding 56-26 lead going into the final eight minutes.

Before the final horn sounded, the Lady Pirates pushed the lead up to 40 points at 73-33 which would be the final tally on the scoreboard.

The red-and-white dominated the glass against Pike Central as they out-rebounded the Lady Hawks, 38-20, and had two players record double-doubles.

Freshman Hope Coley added in seven points off of the bench for coach Deskins while sophomores Cushi Fletcher added six and Linzee Phillips made a foul shot.

Belfry shot the ball well hitting 28-57 shots for a 49 percent clip while Pike Central only made 22 percent of their field goals, hitting on 13-59 attempts.

The win for the Lady Pirates improves their record to 7-7 as they have now notched seven straight wins since battling injuries to open the season and starting 2-7.

They will continue play in the Class AA Championship this Friday at 1 p.m. as they are scheduled to play Warren East at the Owensboro Sports Center in Owensboro, Kentucky. Eight teams advanced to the State Tournament round, with the semifinals being played on Saturday and the Championship round on Sunday.

The Lady Pirates were also scheduled to be back in action on Monday at Logan but scores and stats were not available by press time. They were also set to host Prestonsburg tonight in a 7:30 p.m. tip in a regular season game before heading to Owensboro, but that game could also have been rescheduled.

Belfry also had a regular season game on their schedule for Saturday against Johnson Central but that will now have to be rescheduled.

The UPike commit was unstoppable against the Lady Jaguars as she poured in a career high 45 points and grabbed down 25 rebounds on the night.

Belfry head coach Kevin Deskins, who is in the midst of his 9th season leading the Lady Pirates, was singing the praises of his star center following the big win.

“Katie is probably the best kept secret in the entire state,” Deskins said. “She missed her entire sophomore year with a broken ankle and last year she had some issues when she transferred in being eligible. But I’ve seen a lot of teams across the state and in multiple states, and I’m here to tell you she’s a player. She could play for anybody.”

Ball said that her team got off to a slow start on defense against the top guard for Floyd Central in Katie Moore, and once her team cleaned some things up on that end the offense just started flowing.

“I thought that starting out they (Floyd Central) were moving the ball really well and our defense wasn’t too good because we didn’t play a match-up against Katie (Moore), she’s really good,” Ball said. “Then on offense once we were able to start moving the ball it opened up some lanes for me to cut and my teammates were able to just lob me the ball.”

Ball, who stands at 6-foot-2, was verbally committed to D-1 Cleveland State until last week when she inked with the Lady Bears. Despite her size, she can play inside or out. She finished 19-33 from the floor against the Lady Jaguars and 2-5 from 3-point range.

The two teams were tied at 15 after one quarter of play and Belfry held a slim 35-33 lead going into the halftime locker rooms. The second half was all Belfry as they outscored the Lady Jags 14-8 in the third and 19-10 in the final eight minutes of play to secure the 17 point win.

Coach Deskins credited Ball’s teammates, in particular young guards Keyera Thornsbury, Cushi Fletcher, and Linzee Phillips for taking pressure off of Ball in regards to handling the ball against the Floyd Central pressure.

“If you can try to keep Katie away from having to handle the basketball and put her in a position to score she’s hard to beat,” Deskins said. “And my guards, Keyera, Linzee, Cushi, really everybody, did a great job tonight of controlling that pressure and getting her the ball in a spot to score the ball.”

Thornsbury, just an eighth-grader, just missed double figures for the Lady Pirates as she finished with nine points including 3-3 from the foul line and grabbed six rebounds.

Senior McKenna Sullivan was next with five points, Fletcher scored four, Taylor Layne and Kyra Justice each scored three, and Phillips rounded out the scoring with a bucket.