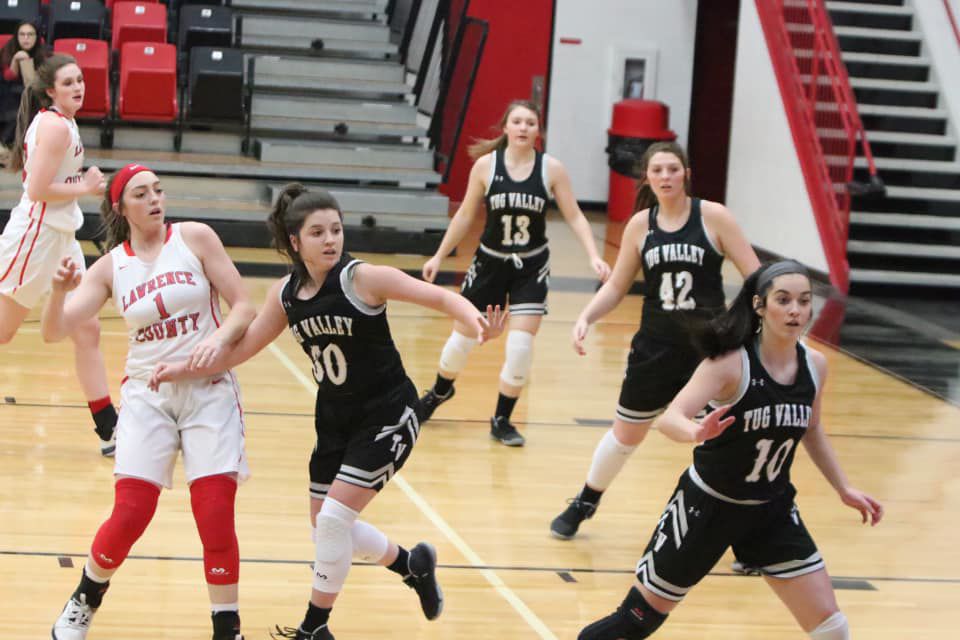 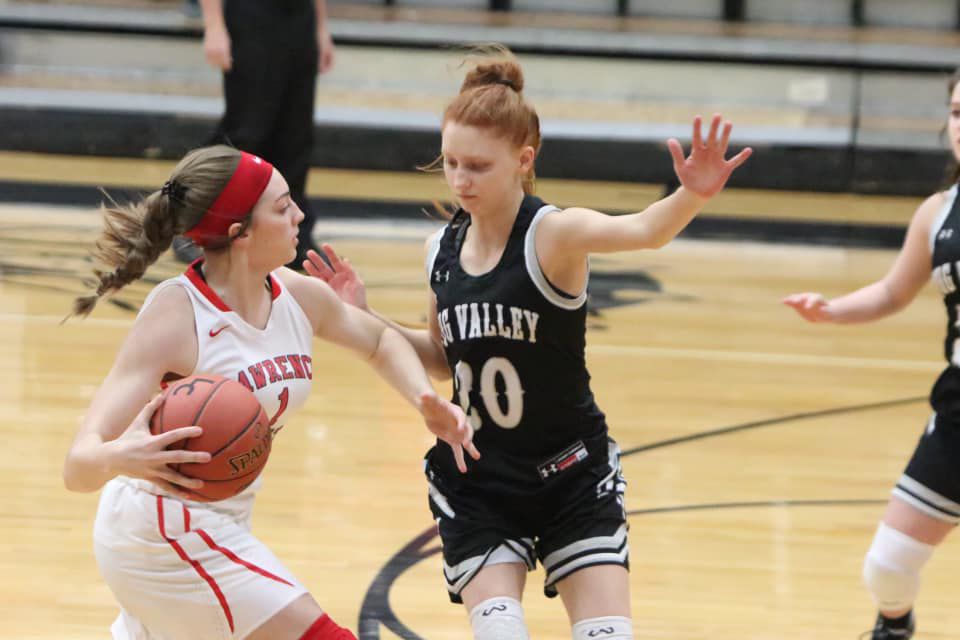 LOUISA, Ky. — The Tug Valley Lady Panthers rallied from a ten-point deficit in the fourth frame to defeat the Lawrence County Lady Bulldogs in overtime by a final score of 82-79 in Louisa on Thursday night.

LCHS would start the game off fast as they won the opening tip and freshman guard Kensley Feltner immediately rushed into the paint for a layup three seconds into the game, and that was followed by a three-pointer by freshman guard Brooke Neal to push the lead to 5-0.

Tug would cut the lead to 7-6 on a jumper by sophomore forward Autumn Hall, but Lawrence would close the quarter on a 15-7 run to lead 22-13 at the end of the period.

The Black and White turned the ball over three times in the quarter. Sophomore guard Kaylea Baisden led the Panthers in scoring in the first period with seven points, while Feltner scored seven of her own for the hosts.

Makayla May would convert a floater with 5:03 left in the second quarter to cut the Dawgs’ lead to 32-26, which led to a TVHS timeout. The two squads would keep trading baskets for the rest of the quarter.

With five seconds left in the first half, Lawrence junior guard Ellie Webb would drain a trey ball to extend her team’s lead to 42-35, but Valley junior guard Alyssa Newsome would race down the floor and heave a long ball from the volleyball line and bank it in as time expired in the second frame to make the score 42-38 as the two teams went into the halftime locker room.

The Panthers would strike first in the third quarter at the 7:18 mark as Hall nailed a layup to cut the deficit to 42-40. Lawrence County would go up by seven points at 47-40 on a pair of free throws by Feltner, but Farley’s team would pull to within one at 49-48 after a trey by sophomore guard Audrey Evans.

Newsome would notch a steal and go coast-to-coast to score a layup with 3:41 left in the third quarter to make the score 53-52 Dawgs, but the home team would score eight consecutive points to end the frame, including a layup by Feltner with five seconds left in the period to put Melinda Feltner’s club ahead 61-52 at the end of three.

Midway through the fourth quarter, Neal would hit a three ball to extend Lawrence’s lead to 69-58, but that is when the Panthers would mount their comeback.

Behind two layups by Evans, a pair of free throws by Newsome, a jumper by May, and a three by Newsome with 1:29 left in the game, Tug Valley would tie the game at 69, capping off an 11-0 run.

With 26.9 seconds left in regulation, Feltner missed a layup that would’ve given LC the lead, and Tug got the rebound and called a timeout. However, May would miss a jumper as the clock expired in the fourth quarter, sending the game to overtime.

The Black and White would strike first in the extra frame as Baisden would bury a three-pointer with 3:39 left in overtime to put TVHS ahead 72-69.

Baisden would score another basket with 2:57 left in OT to put her squad ahead 74-69, which was followed by a trey ball by Hall to propel the Panther lead to 77-70 with 2:25 left in overtime.

The Dawgs wouldn’t quit, though. With 1:03 left in extra time, Feltner came up with a steal at half-court and scored a layup to cut the Valley lead to 77-74, prompting a LCHS timeout.

After a Panthers turnover, Feltner was fouled and made the first free throw, and she missed the second one but came up with an offensive rebound and was fouled again, sending her to the line for two more shots with under ten seconds left in overtime and a chance to give Lawrence County the lead.

Feltner would miss both shots and Tug would rebound. Baisden would go down to the other end of the court and nail two clutch foul shots to put TV ahead 82-79 with 5.4 seconds left in the extra period

The Bulldogs failed to tie the game, resulting in a three-point come back win for the Panthers.

Two players had a double-double for the Panthers. Baisden scored 27 points and came up with a career high 13 assists, while May tallied 18 points and 10 rebounds.

Joining them in double figures was Newsome, who added 16 points to the scoresheet, and Hall, who tacked on 14. Evans scored the other seven points for the Black and White.

Farley was delighted to get this win after a tough loss at Mingo Central on Tuesday night.

“I told the girls in the locker room that goes a long way in taking the bitter taste out of my mouth from Tuesday night,” Farley said. “This is an awfully good team. This team (Lawrence County) beat us at home early in the season and this was a big win. Down a starter (Brooklyn Evans), I thought we showed a lot of guts and heart tonight.”

The fact that Tug Valley rallied to tie the game in the fourth frame and that they went on to win the game in overtime speaks to the resilience and fight of Farley’s team, and that is something he agreed with.

“Our girls have a lot of heart,” he said. “Sometimes, we tend to play like we’re behind when we get ahead, I thought we did that the other night. But tonight, we did a really good job, we learned some lessons from a hard loss Tuesday night to a really good Mingo Central team, but tonight I felt like we learned from some of those lessons and took care of the ball and shot our foul shots. I was awfully proud of them, this is a proud win for me.”

He praised Baisden’s performance on the evening but also acknowledged the contributions the rest of his club made.

“A lot of times it’s that every player steps up in given roles at different times in different games,” Farley said. “We had four or five people in double figures tonight, that’s amazing. Kaylea (Baisden) played well, and she passed the ball extremely well. She got a lot of assists tonight, but a lot of those assists were set up by the pass before the pass...it was a good ballgame. I thought it was a great team effort.”

With the victory, the Lady Panthers improved to 10-4 on the 2019-2020 season, and they will return to the court on Thursday night as they take on head coach Ric Morrone’s Tolsia Lady Rebels in a road tilt.

The two teams met in Naugatuck earlier this season, with Tug taking a 58-40 win. Tipoff is set for 7 p.m. in Glenhayes.