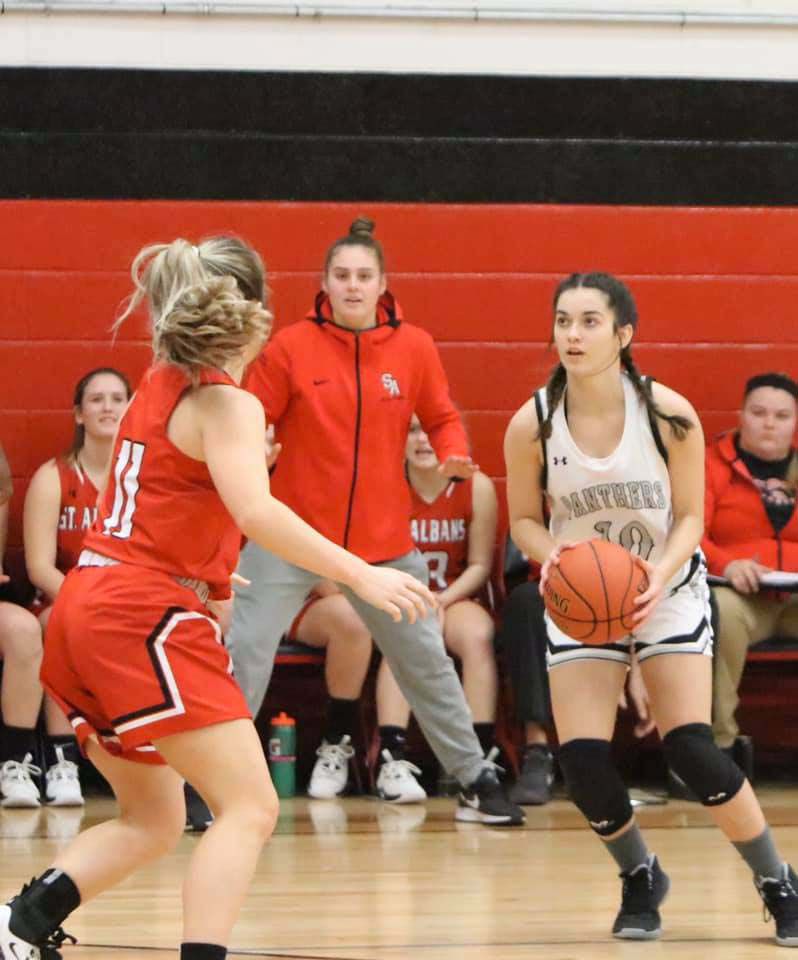 Tug Valley’s Kaylea Baisden fires up a three in the Lady Panthers‘ 58-45 win over St. Albans in the Sissonville Showcase on Saturday in Sissonville, W.Va. 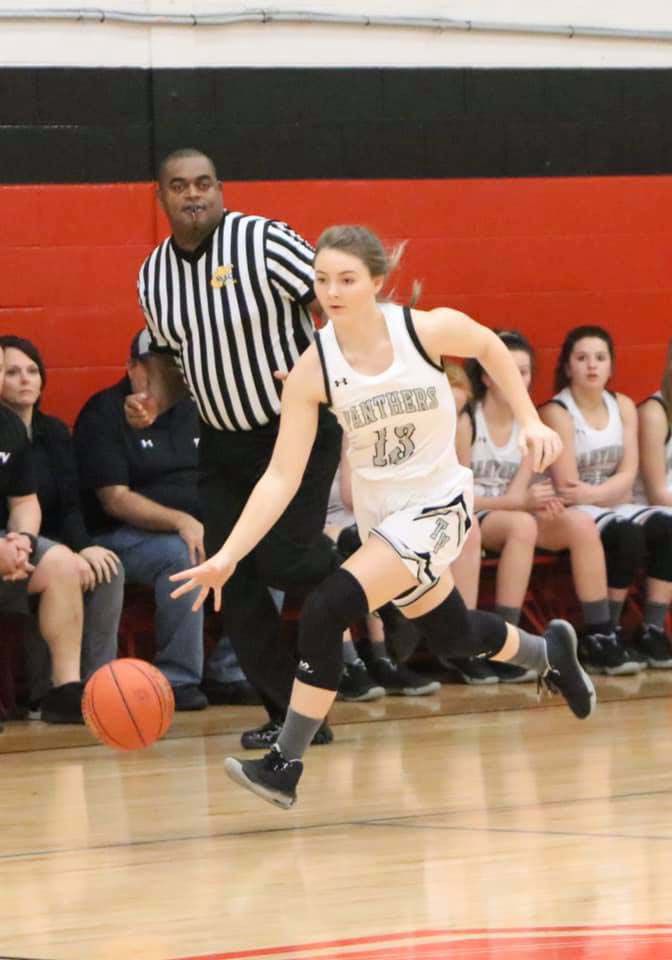 Tug Valley forward Autumn Hall brings the ball up the court in the Lady Panthers’ 58-45 win over St. Albans in the Sissonville Showcase on Saturday at Sissonville High School.

Tug Valley’s Kaylea Baisden fires up a three in the Lady Panthers‘ 58-45 win over St. Albans in the Sissonville Showcase on Saturday in Sissonville, W.Va.

Tug Valley forward Autumn Hall brings the ball up the court in the Lady Panthers’ 58-45 win over St. Albans in the Sissonville Showcase on Saturday at Sissonville High School.

SISSONVILLE — The Tug Valley Lady Panthers had a good showing at the Sissonville Showcase over this past weekend as they picked up wins over Class AAA schools Elkins and St. Albans.

The Lady Panthers (5-1) started off the first game of the showcase against the Fighting Tigers from Elkins High School and they wasted no time taking control of the game on the defensive end.

Coach Clyde Farley’s club held the Tigers to only six points in the opening quarter and then only five in the second as they took a 27-11 lead into the halftime locker room.

Coming out of the break, the Lady Panthers let off the gas a tad in the third period as they committed 13 turnovers and Elkins trimmed the lead down to 36-24 going into the fourth.

It was all for naught however as they rode the perfect 8-8 foul shooting from point guard Kaylea Baisden in the fourth quarter as they secured the 17-point win.

Baisden was the games leading scorer as he flipped in 22 points and also dished four assists. Junior Makayla May picked up a double-double as she scored 14 points, grabbed 10 rebounds, and added three assists for good measure.

Sophomore Autumn Hall was next with five points, 10 rebounds, and four steals while Brooklyn Evans added four points and eight rebounds. Sophomore Audrey Evans finished with three points while Alyssa Newsome rounded out the scoring with one.

Madison Holland led Elkins in scoring with 10 points as she was the only Tiger to land in double figures.

TUG VALLEY 58, ST. ALBANS 45: The Tug Valley Lady Panthers picked up their second win in two days over a class AAA school as they defeated St. Albans 58-45 to go 2-0 in the Sissonville Holiday Showcase.

Just like in the opening game on Friday night the Lady Panthers came out and took full control of the game from the start as they held the Red Dragons to single digits in both the first and second quarter and took a commanding 33-15 lead into the halftime locker room. Just like in game one, Tug Valley came out and struggled a bit in the third period as they were outscored 20-9 and St. Albans trimmed the TV lead to 42-35 going into the fourth.

The game never got any closer however as coach Clyde Farley’s club made the plays down the stretch to secure the 13-point victory.

Makayla May had a monster game for the Lady Panthers as she recorded her second double-double in two days, scoring 13 points and ripping down a game high 18 rebounds. She scored 12 of her 13 points in the second half.

Kaylea Baisden was the leading scorer for Tug Valley as she poured in 19 points on four three-pointers, and also grabbed five rebounds, and dished six assists.

Junior Alyssa Newsome had the hot hand in the first half as she finished the game with 14 points on four 3s, with all 14 of her points coming in the opening half.

The two wins for Tug Valley improves them to 5-1 on the season as they have now won five in a row since losing their season opener.

They are back in action on Thursday in a rescheduled game at home against Lawrence County in a 7 p.m. tip and then again on Saturday against Class A No. 4 Summers County in a 3 p.m. tip at the Willie Akers Arena in Logan.