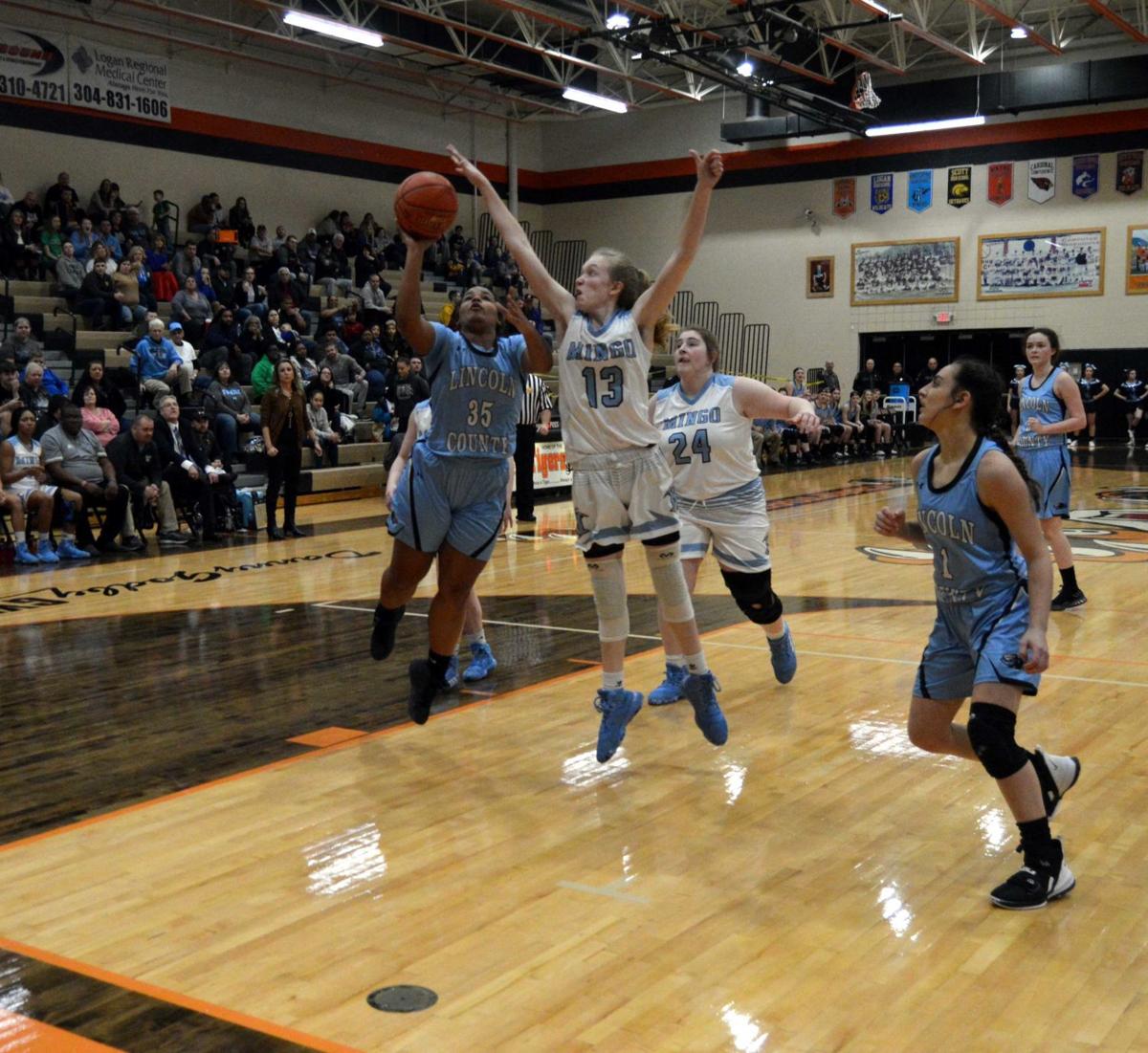 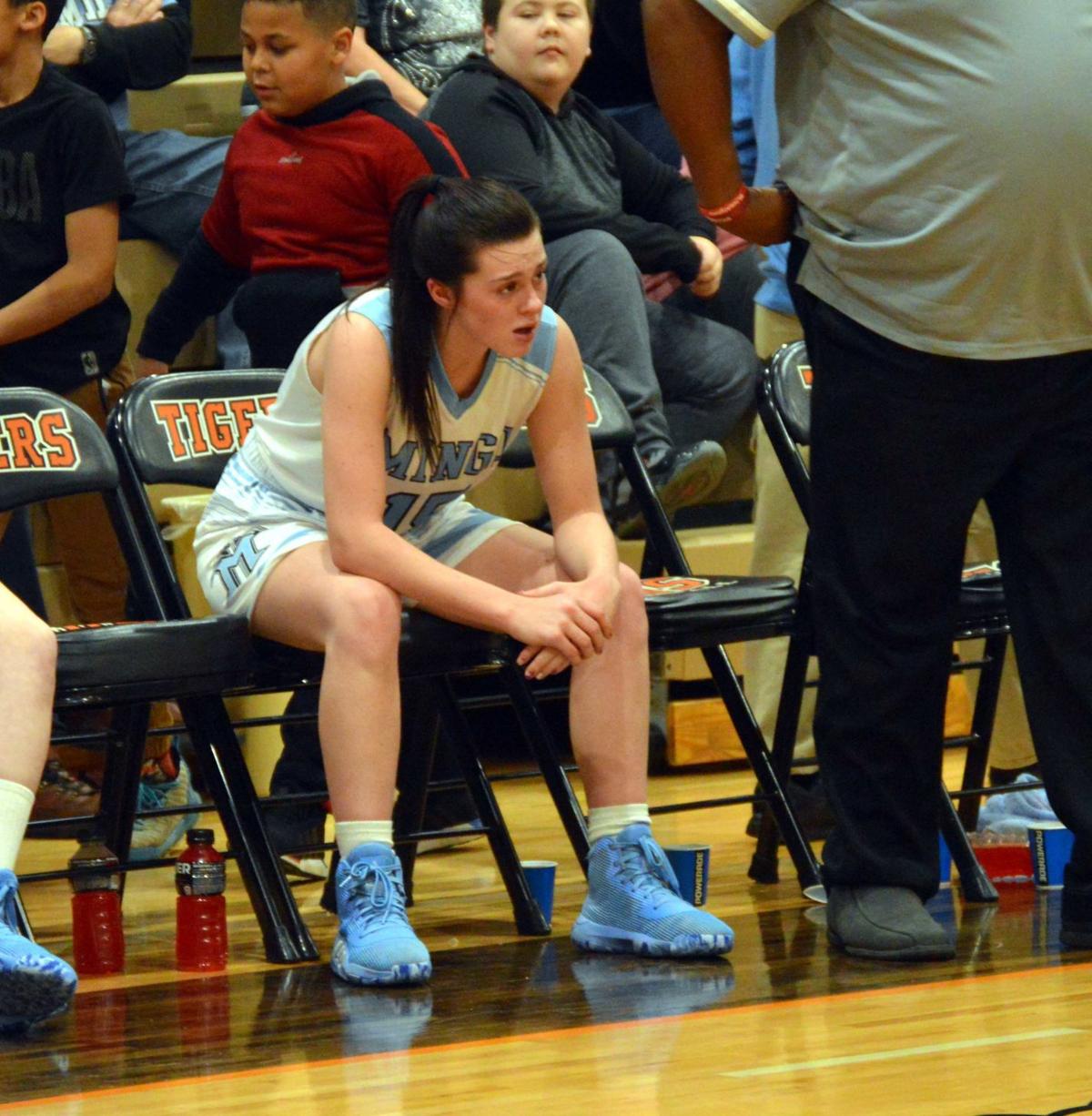 Jarrid McCormick/Williamson Daily News Mingo Central senior Zoe Evans could only watch after fouling out late in the game during the Lady Miners 58-49 loss in the semifinals of the Class AA Region IV Section II Semifinals on Wednesday, Feb. 26, 2020 at Chapmanville High School. 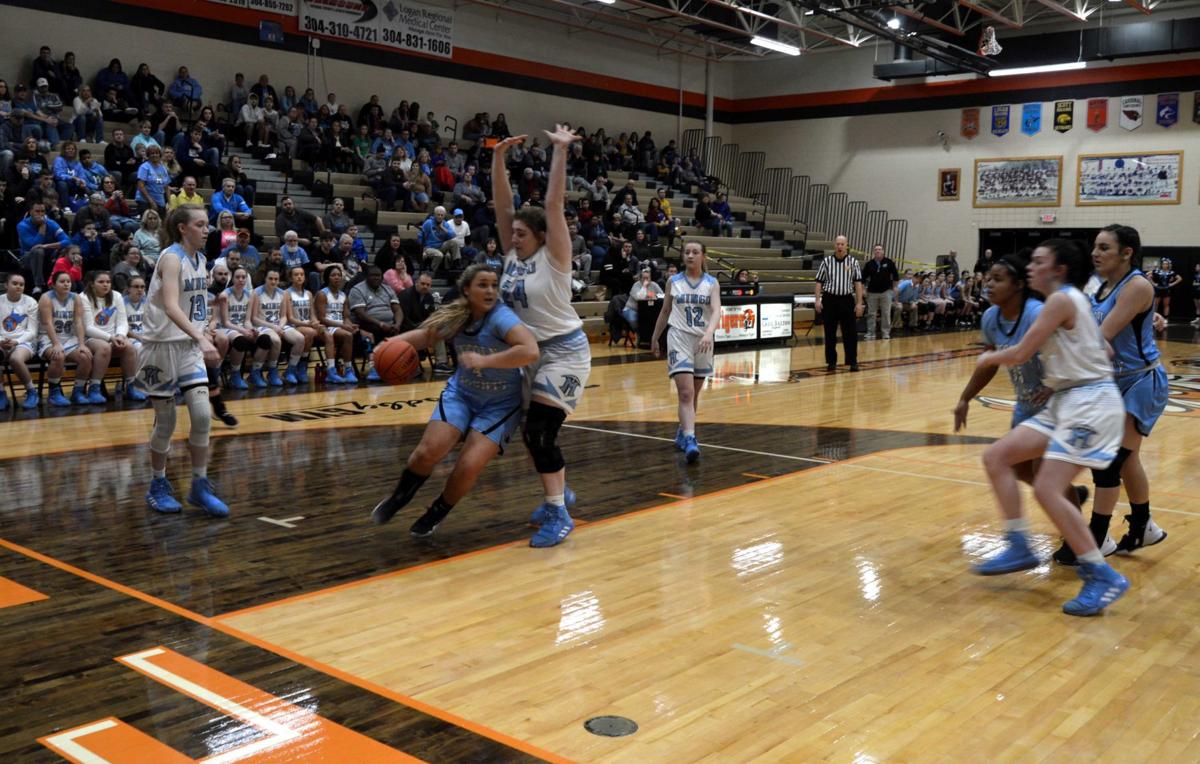 Jarrid McCormick/Williamson Daily News Mingo Central senior Zoe Evans could only watch after fouling out late in the game during the Lady Miners 58-49 loss in the semifinals of the Class AA Region IV Section II Semifinals on Wednesday, Feb. 26, 2020 at Chapmanville High School.

CHAPMANVILLE — First year head coach Kim Davis-Smith and the Mingo Central Lady Miners saw their 2019-2020 campaign come to an end with a 58-49 loss to the Lincoln County Panthers in the first round of the Class AA Section 2 tournament on Wednesday night at Chapmanville Regional High School.

It was a tough start for the Blue and White (16-7) as they fell behind 12-0 to the Lady Panthers to begin the game. Senior guard Xziah Rhodes would hit a jump shot with 4:46 left in the first frame to get Mingo on the board for the first time in the contest. MCHS would cut the deficit to 15-5, then they would go on a 5-0 run to reduce it to 15-10 thanks to four tallies by Rhodes.

Junior forward Natalie Fout would connect on a long ball to extend the Lincoln lead to 18-10, and they would lead 18-12 at the end of the period after a pair of foul shots by Miner senior forward Maliyah Martin. Rhodes had nine of Mingo’s 12 points in the quarter.

The Lady Panthers would take a 22-14 lead early in the second frame after a trey by senior guard Carly McComas. Junior guard Scarlett Thomason would score the hoop and harm and nail the foul shot for Central to cut the lead to 22-18, but then LCHS would go on a 5-0 advantage to propel their lead to 27-18 with 3:11 left in the first half, forcing Davis-Smith to call a timeout.

Lincoln County (17-8) would lead by as many as 10 points in the quarter at 30-20 after a three pointer by Fout, and sophomore forward Kenley Kveton would convert a floater to put the visiting team on the scoreboard ahead 32-24, and that would be the score at halftime. Freshman forward Madisyn Curry was the leading scorer for Mingo Central in the second period with four points, while Rhodes and Thomason each tacked on three.

The Panthers would lead 36-29 after a layup by Fout, and then 38-30 on a bucket by junior forward Keke Henderson. Rhodes hit a jumper, and Thomason hit two free throws and a jump shot of her own with five seconds left in the third period to make the score 40-36, and that would be the score at the end of the frame.

Rhodes would reel off four straight points to tie the affair at 40 all, including a layup with 6:45 left in the game and forcing Lincoln County to call timeout. However, Randy Adkins’ team went on a 9-0 run to put the Lady Panthers ahead 49-40, and they would never surrender the lead again. They would go on to win the game by a final score of 58-49.

Rhodes lead Mingo Central with 24 points on the night, while Thomason added 17 of her own. Curry put four points on the scoresheet, while Martin and senior forward Zoe Evans had two points each on the evening.

Davis-Smith wished for a different ending than the one her team experienced on Wednesday night.

“It’s tough, I can’t lie” she said. “We’ve poured everything we’ve had into the season, definitely not the way we wanted it to end. I felt like we were really prepared. We just couldn’t execute. Our kids were bought in. I hate it for the seniors, because their path was right there. No one hates losing more than me, especially when we felt like we had all the pieces to the puzzle.”

She had a different outlook for the season than how it turned out in the end, and she wasn’t shy about pointing that out.

“I shared with the seniors that you always think about the outcomes of games and what you might say to them, but I did set high expectations” Davis-Smith said.”16-7 is great, yeah, but we should have been in Charleston. But, the three seniors (Rhodes, Martin, Evans) bought in. I was different than they had. I have different standards and different accountability than what they’ve had to deal with as a player.”

“We have some good kids coming up. We didn’t reach our goal this year, but you’re a huge part of laying the foundation for the future of Lady Miner basketball. These other kids are going to come in here and work hard and expect to get to Charleston even though that’s expectation.”

The way the campaign ended may have been tough for Davis-Smith and her squad, but getting back to work is the next thing on her agenda.

“For these girls’ coming back, our underclassmen and our upcoming freshmen, they’re going to have opportunities to get in the gym, get stronger, and work on areas of weakness that we need to work on,” she said. “We share that with them. I think you learn more from losing. No one gives you anything in life. We felt like we kind of played like that tonight. You have to play through it.”

With the loss, Mingo Central’s season came to a close at 16-7.