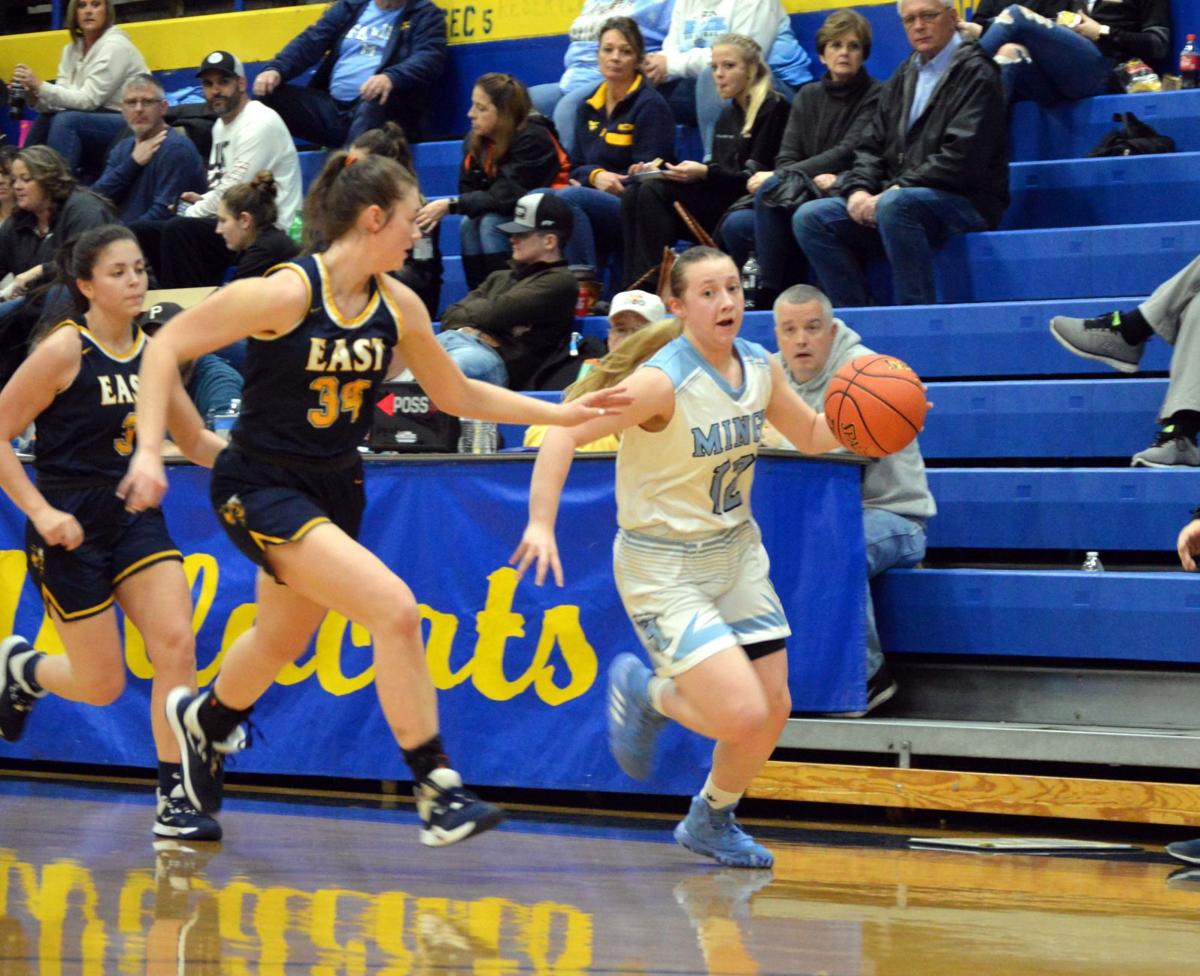 Mingo Central point guard Jenna Wagoner brings the ball up the court in the Lady Miners’ 61-56 win over East Fairmont in the WIldcat Classic on Saturday in Logan. 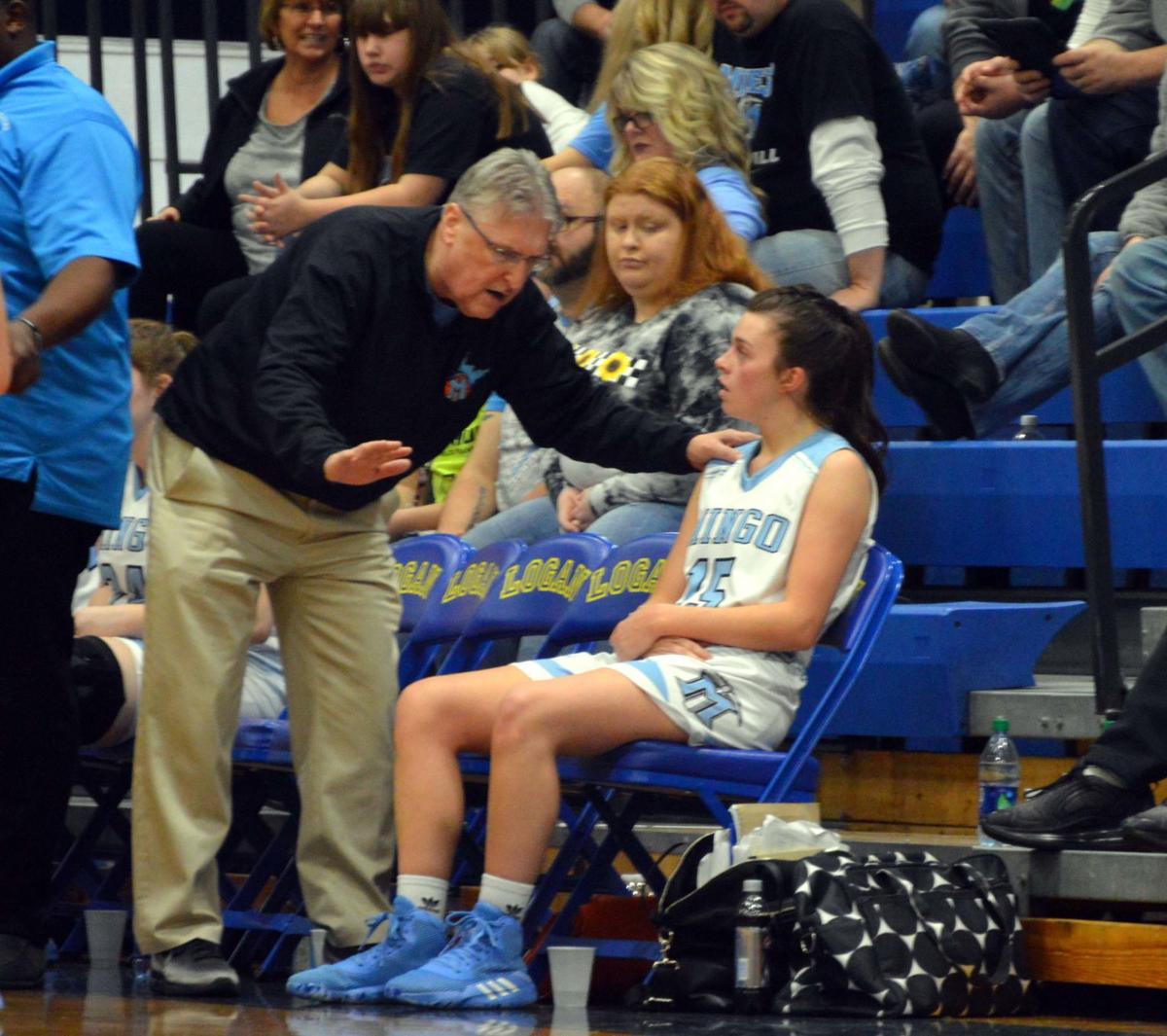 Mingo Central assistant coach and Burch Bulldog legend coach Mike Smith talks with senior Zoe Evans during a timeout in the Lady Miners’ 61-56 win over East Fairmont in the WIldcat Classic on Saturday in Logan. 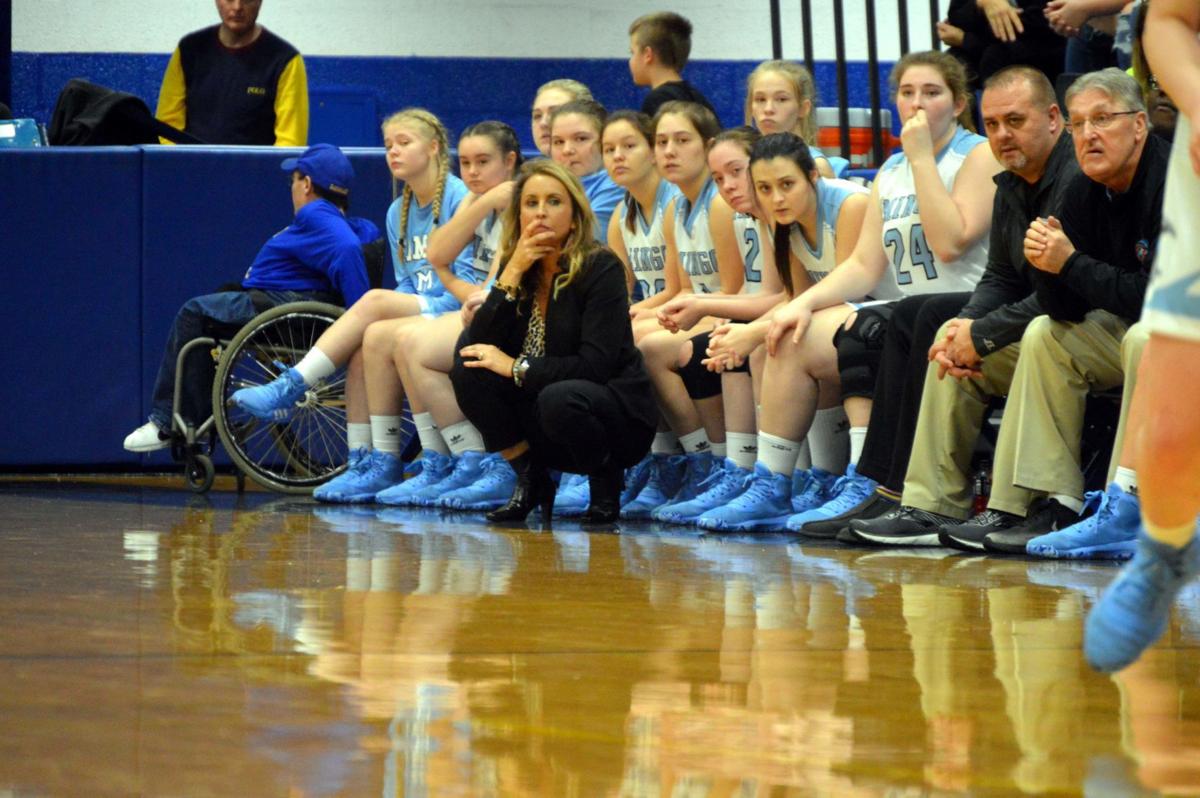 Mingo Central point guard Jenna Wagoner brings the ball up the court in the Lady Miners’ 61-56 win over East Fairmont in the WIldcat Classic on Saturday in Logan.

Mingo Central assistant coach and Burch Bulldog legend coach Mike Smith talks with senior Zoe Evans during a timeout in the Lady Miners’ 61-56 win over East Fairmont in the WIldcat Classic on Saturday in Logan.

LOGAN — The Mingo Central Lady Miners opened some eyes across the Mountain State on Saturday in the Wildcat Classic at Willie Akers Arena as they defeated East Fairmont by a final score of 61-56.

“This was a big win for us as a team,” coach Kim Davis-Smith said following the win. “I old our girls today that this was a big test for us, we’ve had some success early and we’ve also had a couple of losses. But I thought it was just a good test of kind of who we were. And it gave us a chance to play in a nice venue with lots of media here. I really feel like the girls showed up today and did what we asked them to do. “

They quickly pushed their lead to eight at 22-14 following a three from senior Ziah Rhodes and a layup from fellow senior Maliyah Martin off of a nice assist from another senior in Zoe Evans to start the quarter.

The Bees wouldn’t go away however as they clawed their way right back into the game and only trailed by two at 27-25 going into the halftime locker rooms.

Coming out of the break, East continued to chip away the the Lady Miner lead until it disappeared, as they took a 33-31 lead on a three from Kierra Bartholow.

MCHS quickly responded however as junior sharpshooter Scarlette Thomason quickly put eight points on the board, including two 3-pointers, and the Lady Miners took the lead back at 39-35.

The two teams traded buckets in the final minutes of the third quarter as Mingo Central held onto the lead at 43-39 going into the final eight minutes of play.

After another three from Kianna Casuccio cut the MC lead to 43-42 to start the fourth, Rhodes answered with a three of her own and pushed the lead back to four at 46-42.

The next time down the floor, Martin picked up her fourth foul on the defensive end and coach Davis-Smith had to send her to the bench in favor of freshman Madisyn Curry.

The Bees made their move, as they scored the next five points to take the lead at 47-46.

Now trailing by a point, the Lady Miners received a big basket by Curry who had just checked in off the bench as she rattled in a corner three to give MC the lead back at 49-47.

After a bucket by Stover knotted the game up at 49, the Lady Miners rattled off six straight points bolstered by two drives from Rhodes to take a 55-49 lead.

The Bees trimmed the lead down to two in the waning seconds but could not get any closer, as point guard Jenna Wagoner secured the win for MCHS with some key free throws down the stretch.

“For us to come over here and pick up a win like this is huge, we’re still learning who we are as a team,” coach Davis-Smith said. “I’ve coached a different team every single game. We’ve not played the same defense, we’ve not done nearly anything consistently. So we’re still learning. And that’s a positive thing for me, because I don’t know who we are, but I think we can be pretty special come March.”

Rhodes led MCHS in scoring on the night as she finished with 20 points on 8-14 shooting and also grabbed down five rebounds and two steals. Thomason was right behind her as she scored 18 points, including 4-7 from three-range, and grabbed six boards while blocking two shots.

“Honestly I didn’t realize Ziah (Rhodes) had that many, it was a quiet 20 for her tonight,” Davis-Smith said. “But her and Scarlet (Thomason) are huge players for us. I’ve been most impressed with Scarlet defensively, we know she can shoot but she’s giving us some other things and that’s what I’ve been asking of her.”

Curry was the next high scorer as she contributed seven big points off of the bench while Evans and Martin each scored six. Evans also added four boards, three steals, and two blocks while Martin grabbed nine boards, blocked two shots, and dished out two assists.

“Madisyn (Curry) is a freshman and we expect her to do big things and Maliyah (Martin) is huge for us, she really is,” Davis-Smith said. “She battles and does all the intangibles. She’s boxing out people, she may not always get the rebound but a lot of times she does.”

Wagoner rounded out the scoring column for the Lady Miners as she swished in four points, all from the foul line, and also dished a game high seven assists but committed nine turnovers.

Davis-Smith admitted that as a former point-guard herself, that she holds Wagoner to a high standard but says that she is accepting it well and improving every game.

Bartholow led the Bees in scoring on the night as she dropped in 15 points all coming from 3-pointers while Stover followed her with 14 and Avery Pack reaced double-figures with 11.

The win for Mingo Central improves them to 5-2 on the season and they return to action on Wednesday in an important sectional contest against 7-2 Chapmanville.

The Lady Miners won the first meeting between the two clubs 67-64 on Dec. 11. Tip-off is scheduled for 7 p.m. in the Chapmanville Regional High School gymnasium.