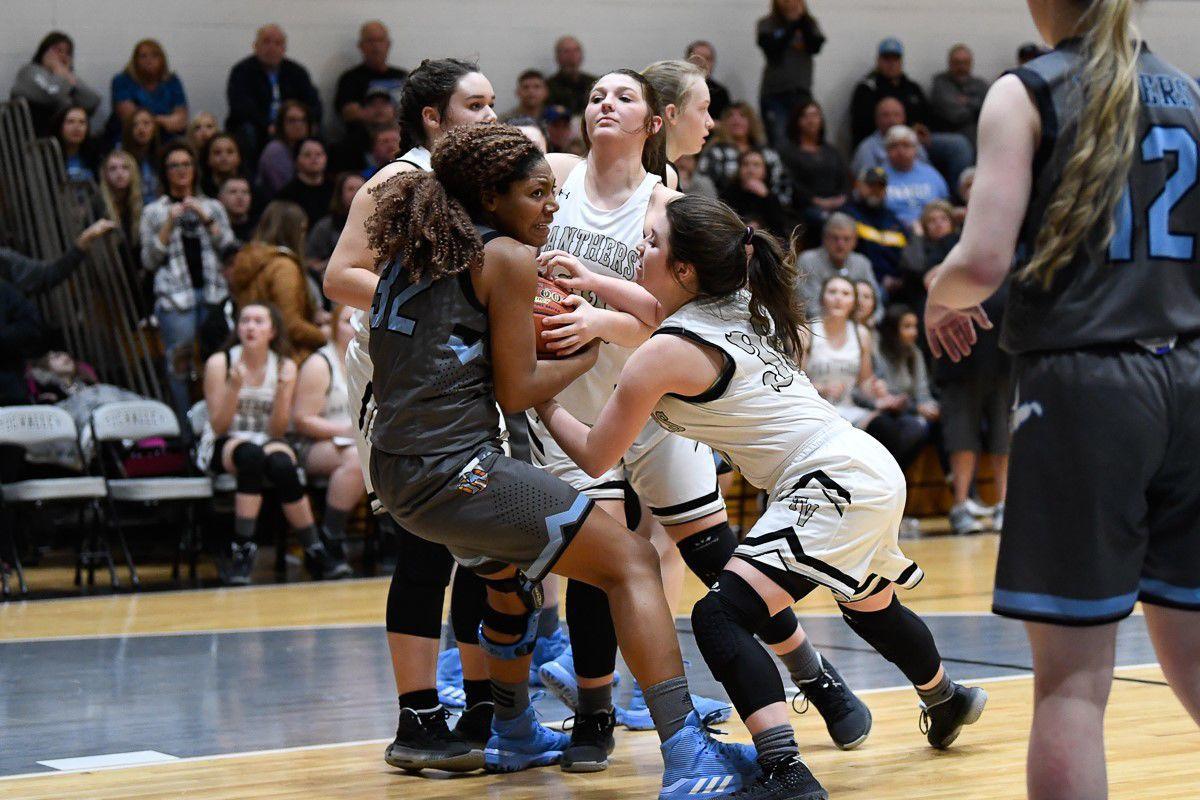 Mingo Central’s Maliyah Martin battles for a rebound against Tug Valley’s Makayla May and Audrey Evans during the Lady Miners’ 60-57 win over the Lady Panthers on Jan 21 inside the Tug Valley High School gymnasium. 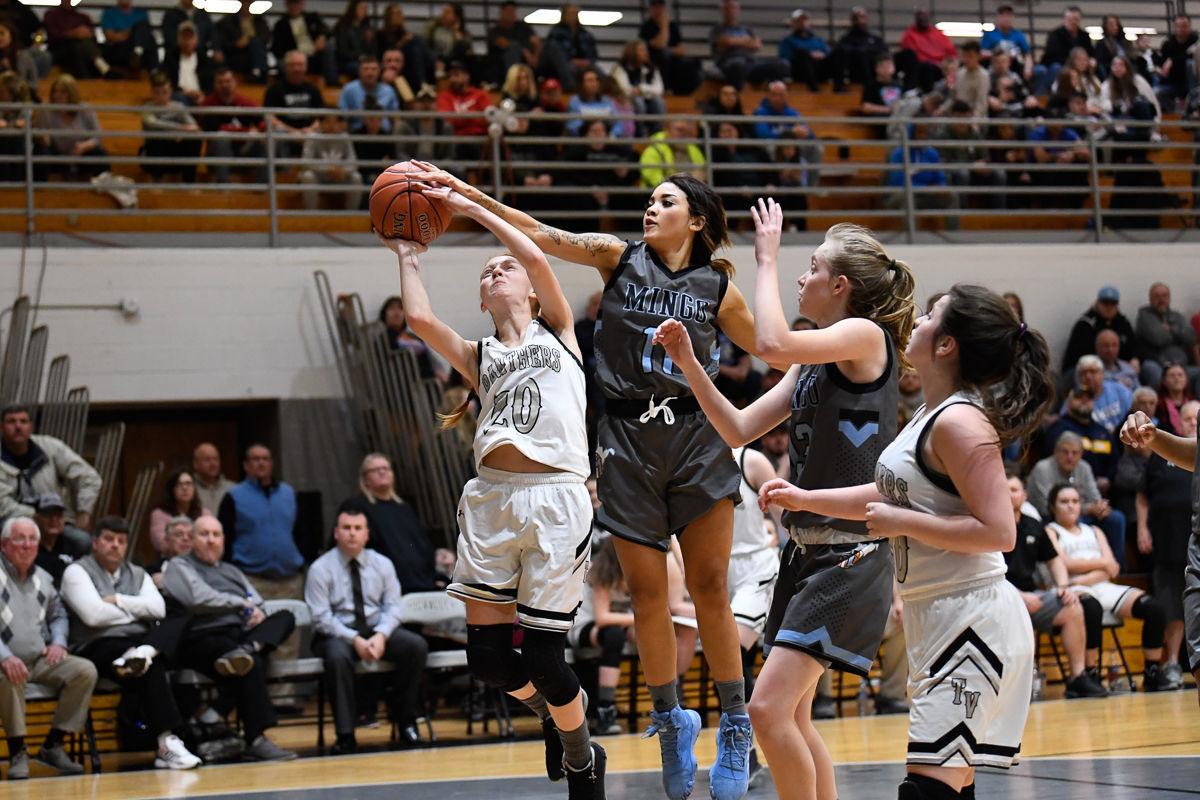 Mingo Central’s Ziah Rhodes blocks the shot of Tug Valley’s Alyssa Newsome during the Lady Miners’ 60-57 win over the Lady Panthers on Jan. 21 inside the TVHS gymnasium.

Mingo Central’s Maliyah Martin battles for a rebound against Tug Valley’s Makayla May and Audrey Evans during the Lady Miners’ 60-57 win over the Lady Panthers on Jan 21 inside the Tug Valley High School gymnasium.

Mingo Central’s Ziah Rhodes blocks the shot of Tug Valley’s Alyssa Newsome during the Lady Miners’ 60-57 win over the Lady Panthers on Jan. 21 inside the TVHS gymnasium.

NAUGATUCK — The Mingo Central Lady Miners picked up a win over cross-county rival Tug Valley on Tuesday of last week as they came from behind to walk away with a 60-57 win in the Tug Valley High School gymnasium.

The game was back-and-forth from the opening tip as the two teams traded buckets in the first quarter with MC taking a 14-10 lead into the second after a three by Scarlet Thomason before the first horn.

The Lady Panthers and coach Clyde Farley turned the tide in the second frame as they limited to MC to only seven points while dropping in 17 on the offensive end to take a 27-21 halftime lead.

Coming out of the break, Tug Valley continued to add to their lead as they took a 47-35 advantage after a pair of 3’s by Alyssa Newsome and a long ball from Kaylea Baisden gave them a 47-35 lead late in the third.

The Kim Davis-Smith led Lady Miners switched to a full-court press and went on a 5-0 run to end the quarter to trim the TV lead to 47-40 going into the fourth.

After 3's by Thomason and point guard Jenna Wagoner brought the Miners to within one at 49-48, senior guard Ziah Rhodes scored six straight points for MC and Zoe Evans flipped in a layup to give them a 56-52 lead.

After a Baisden lead trimmed the MC lead back to one at 56-55, Rhodes hit a pull-up jumper in the lane to push their lead to 58-55.

The Lady Panthers had a chance to tie the game and send it to overtime in the closing seconds but a Baisden three was off the mark and the Miners held on for the three-point win.

Rhodes and Thomason led MCHS in scoring as they each dropped in 18 points while Madisyn Curry added 11 points and five rebounds off the bench. Evans contributed eight points while Wagoner scored five and dished out eight assists. Maliyah Martin was held scoreless but led Mingo Central in rebounds with nine.

Sophomore Brooklyn Evans had her best game of the season for the Lady Panthers as she recorded a double-double, finishing with 18 points and 11 rebounds.

Baisden also reached double-figures for TV with 15 points and dished six assists while Newsome narrowly missed double-digits with nine. Makayla May just missed a double-double as she scored eight and grabbed 12 rebounds while Autumn Hall added five and Audrey Evans scored two to round out the scoring.

MINGO CENTRAL 84 MAN 45 (Jan. 25): The Mingo Central Lady Miners received a monster performance from junior Scarlet Thomason on Saturday night as the sharp-shooter scored a career high 42 points and carried them to the 84-45 win.

Thomason set history against the Lady ‘Billies as she connected on 13 three-pointers, which is believed to be a state record for both boys and girls.

Although their is no database for high school girls record in West Virginia, the record for most 3’s in a game by a boys’ player is 12 by Ripley’s Chase Fischer, according to the West Virginia Sportswriters Association.

She connected on 13-26 attempts from three against Man and hit 3-3 from the foul line to record the 42 points. She did not attempt a field goal inside the three-point arc.

Makeisha Harness added a three-pointer and megan Adkins scored two to round out the scoring for MCHS with a three-pointer while Madisyn Curry was held scoreless but grabbed a team high 11 rebounds.

The winless Lady Hillbillies were led by Olivia Ramsey’s 13 points.

The pair of wins for MCHS improves them to 10-5 on the season as they prepare for the final leg of their regular season schedule and postseason play.

The Miners were back in action on Tuesday in a game at Herbert Hoover but scores and stats from that contest were not available by press time.

They will end the week with a pair of home games, first on Friday against Lincoln County and a rematch on Saturday against Tug Valley. Tip-off for both of those games are set for 7:30 p.m.