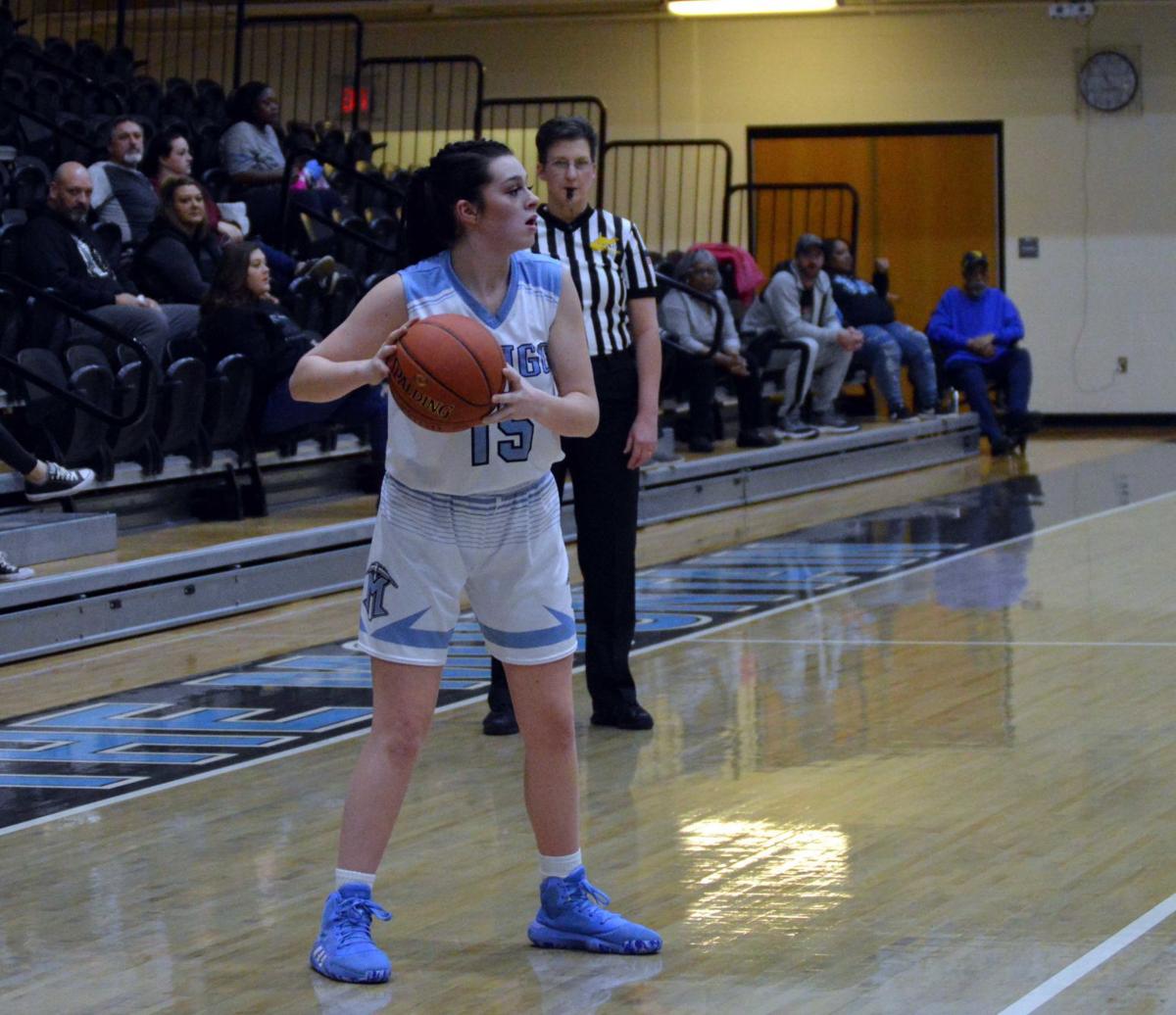 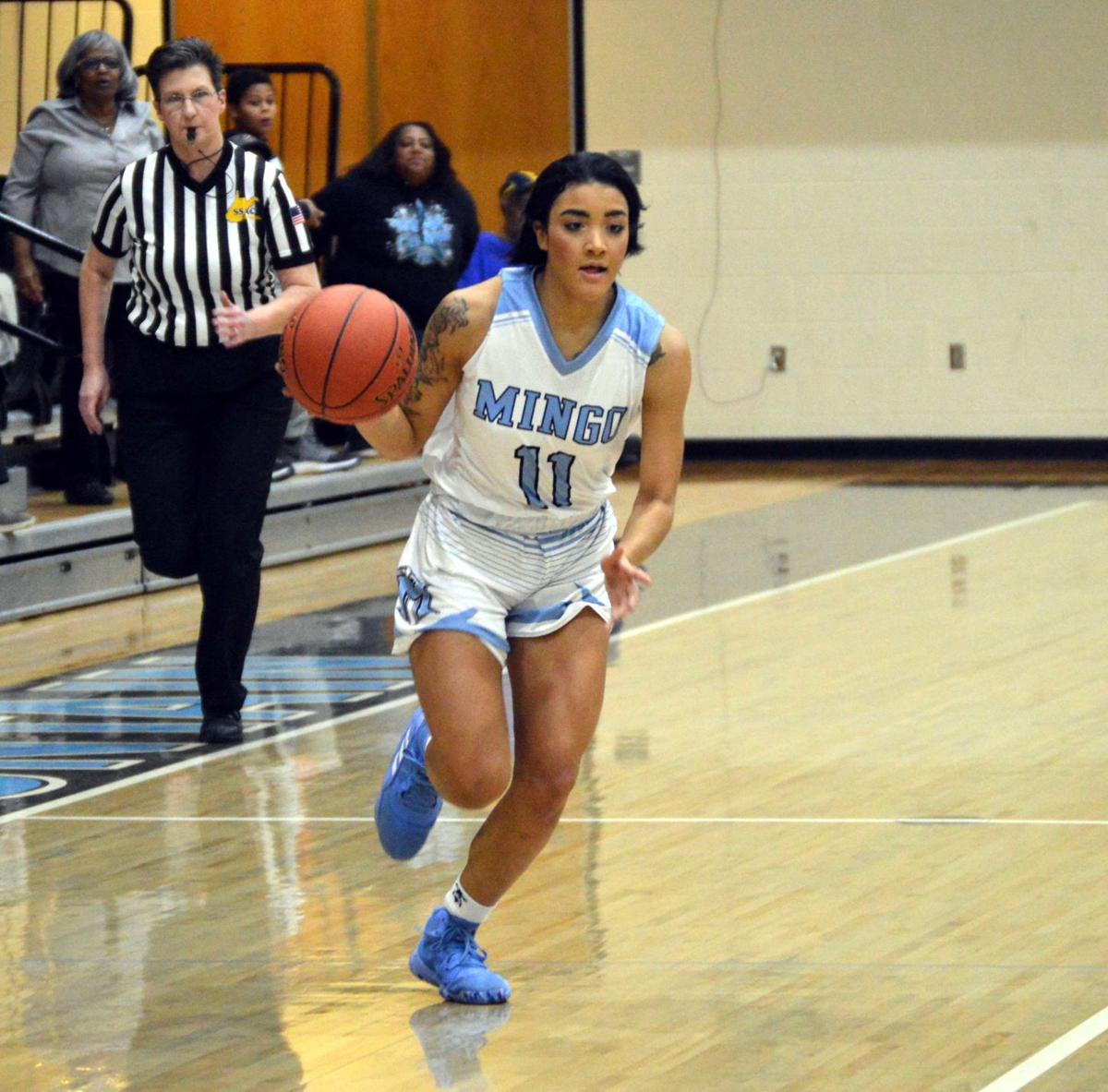 NEWTOWN — Head coach Kim-Davis Smith and the Mingo Central Lady Miners ended their home slate of the 2019-2020 regular season on Saturday with a 59-34 victory over the Summers County Lady Bobcats, who were ranked #3 in the Class A West Virginia AP girls basketball poll.

Summers County (11-6) would start the game off with two quick jumpers by junior guard Riley Richmond and junior guard Gavin Pivont. It would take the Miners until the 4:49 mark in the first frame to get on the scoreboard as senior guard Ziah Rhodes nailed a three pointer.

The Lady Miners (13-6) turned the ball over three times in the opening period, while Summers gave it away five times. Rhodes lead the Blue and White with four tallies in the frame.

Richmond made a jumper to start the second quarter, but then Mingo would go on a furious 13-0 run throughout half of the period, which included a trey ball by junior guard Scarlett Thomason to extend the Miner lead to 23-14.

A bucket by Bobcats junior guard Taylor Issac with 2:44 left in the first half put a halt to the MCHS run, and that would start a 7-0 run of their own to cut the Lady Miners lead to 23-21 with 12 seconds left in the frame after Pivont scored a layup.

However, Mingo Central junior guard Jenna Wagoner made true on a three as the second quarter clock expired, propelling the hosts to a 26-21 lead as the two teams went to the locker rooms at halftime. Rhodes lead the Miners with six points scored in the second period, while Wagner added five to the scoresheet in the frame.

It would take until the 4:58 mark in the third frame for either team to get on the scoreboard, as Miners senior forward Zoe Evans broke the MCHS scoring drought by getting the hoop and harm on a layup, making the free throw and giving Davis-Smith’s squad a 29-21 lead.

Central would lead by as many as 11 in the quarter, and they would lead 36-28 at the end of the period behind a steal and layup by senior forward Maliyah Martin with 11 seconds left on the clock. Rhodes once again lead the Lady Miners in scoring in the third frame with five points.

The fourth quarter was dominated by Mingo, as they would outscore Chad Meador’s team 23-6 and win the game by a final score of 59-34 in the final home game of the year on Miner Mountain.

Issac lead Summers County in scoring with 10 tallies while Richmond followed her with nine.

For the game, the Lady Miners outshot the Lady Bobcats in field goal percentage 35% to 26%, outrebounded them 40-30, and bested them in the turnover battle 17-14. As a team, the Blue and White also had an advantage in steals on the night at 9-7.

Rhodes is no stranger to great performances on the court, and she labeled her teammates as the reason for that.

“Mostly the team, they just push me and keep me in shape and they really just keep my head up like I do them,” Rhodes said. “They make me who I am.”

Thomason is another key cog in the Lady Miners’ attack that hasn’t lost her confidence in a season that saw her nail 13 three-pointers in a game against Man one game after hitting seven against Scott. She pointed out that hard work and being put in tough situations was the reason for that belief in herself as a player, and Davis-Smith also echoed that sentiment.

Davis-Smith praised her team’s defensive effort against the Bobcats, but she shifted her focus to the remaining games in the regular season. She knows those contests won’t be easy.

“We have a few tough games left,” Davis-Smith said. “We’re playing Wayne next Saturday, and we play in the Little General Shootout Monday, and then we play Logan, so definitely a tough couple of games left in the season. I feel like we’re kind of gelling as a team and everyone’s understanding their role, so we hope that we can continue in the direction we are today.”

Those games will be tough for the Miners, but she hasn’t lost focus of her main goal, which is to win a state championship.

“We’re getting there with that mindset,” she said. “We read a devotion today about being relentless and being a relentless competitor and I think that was the first devotion I read to them at the beginning of the season. I read that to them today. I feel like they’ve captured what being a relentless competitor is and that it’s not always going to be pretty, but you can never give up. I think they are actually finally getting that mindset that I’ve said from day one, that we can get to Charleston, but you’re going to have to believe it and you’re going to have to close out games and be smart at the end of games.”

Rhodes is with her head coach when it comes to the belief that they can make it to the Charleston Civic Center.

“I agree with her, I think that we can go to state and go far but we just really need to be in shape and push on the ball, like get up and down the court,” she said. “Our defense needs to get better, and as soon as we step in the game just to go at it and not wait until the second half, just get the score up and keep pushing.”

The Lady Miners improved to 13-6 on the campaign with the win, and they returned to the hardwood on Monday as they took part in the Little General Shootout at West Virginia State University with a contest against the Scott Lady Skyhawks. Scores and stats from that game were not available by press time.

MCHS is then set to play their final two games of the regular season as they will travel to Wayne on Saturday for a rescheduled game and then make the short trip to Logan on Monday for a 7 p.m. tip.