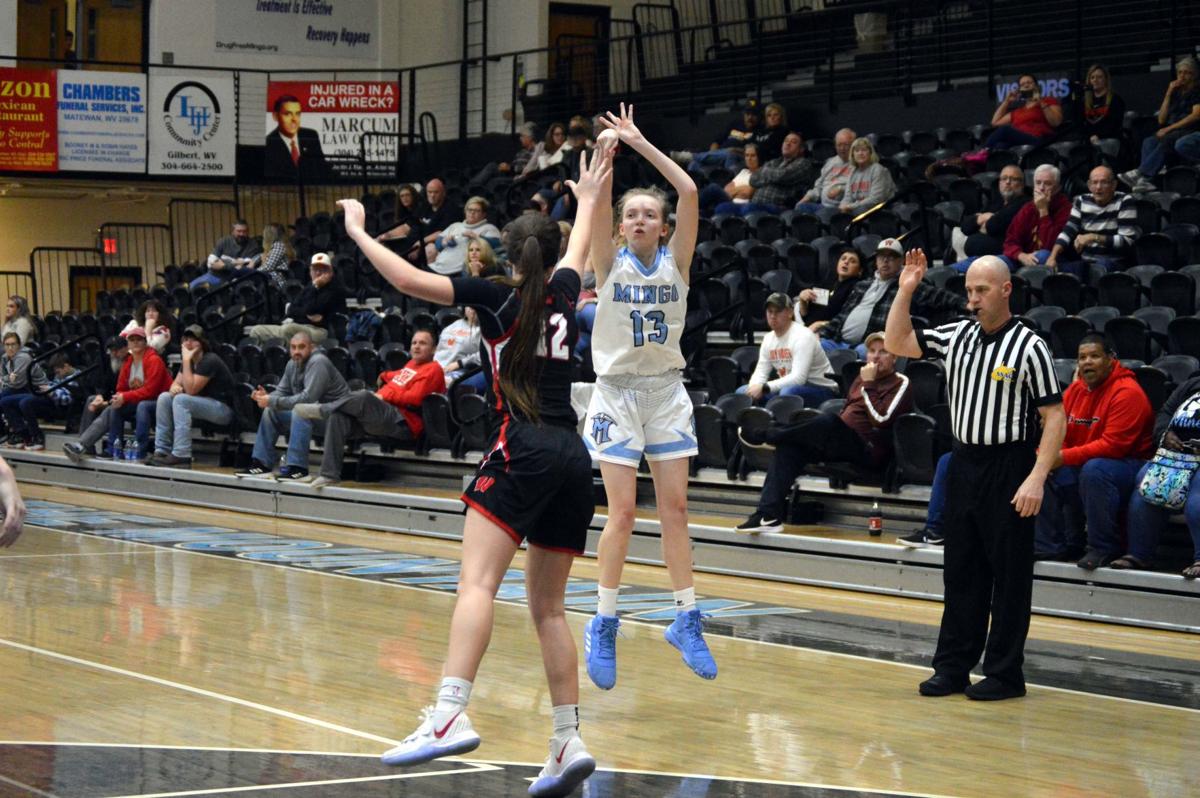 Jarrid McCormick/Williamson Daily News Mingo Central’s Scarlett Thomason fired up a 3-pointer over a Wayne defender during the Lady Miners game against the Lady Pioneers on Tuesday, Jan. 14, 2020 inside the MCHS Gymnasium. 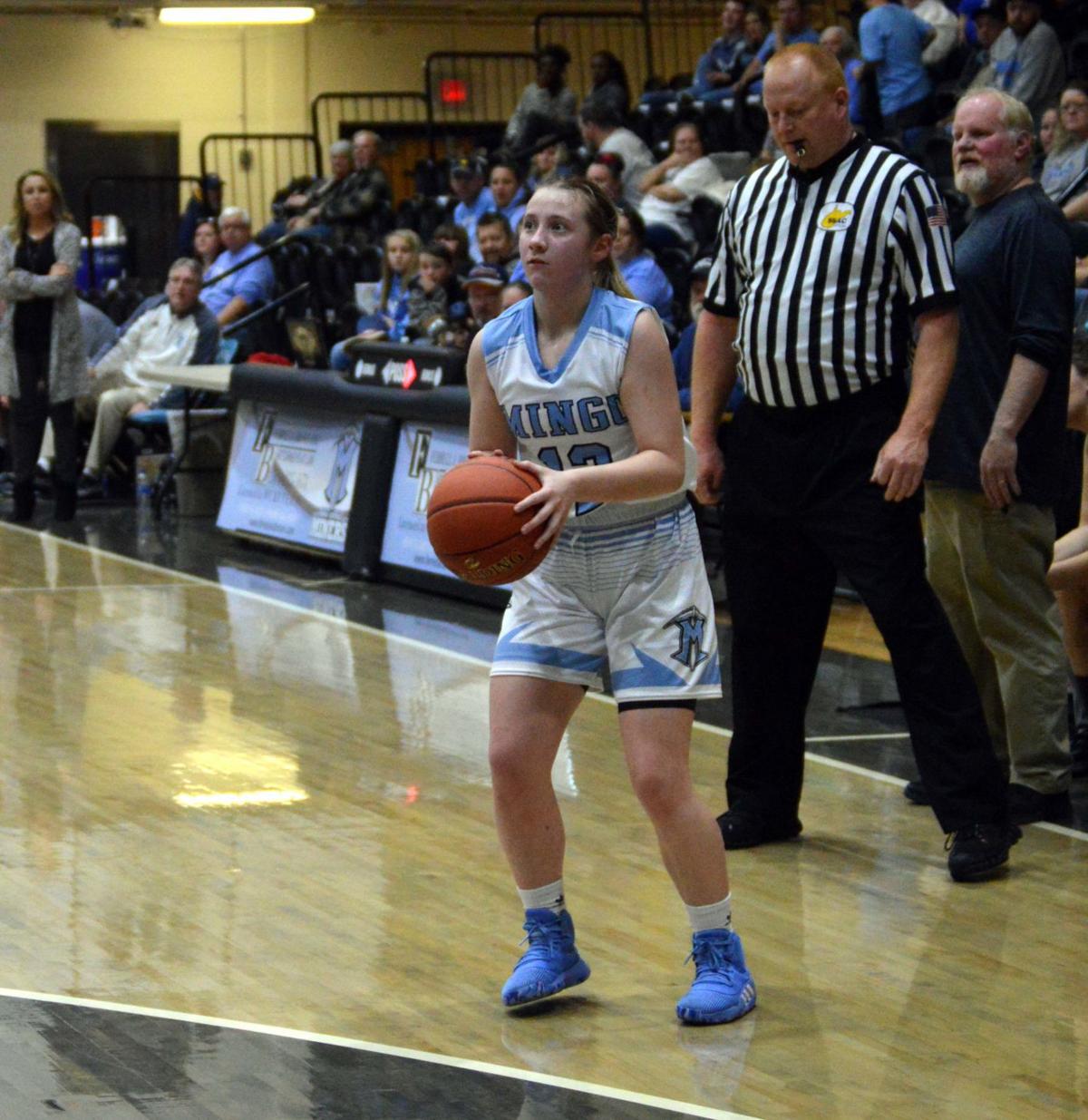 Jarrid McCormick/Williamson Daily News Mingo Central’s Jenna Wagoner prepares to launch a three-pointer during the Lady Miners game against the Lady Pioneers on Tuesday, Jan. 14, 2020 inside the MCHS Gymnasium. 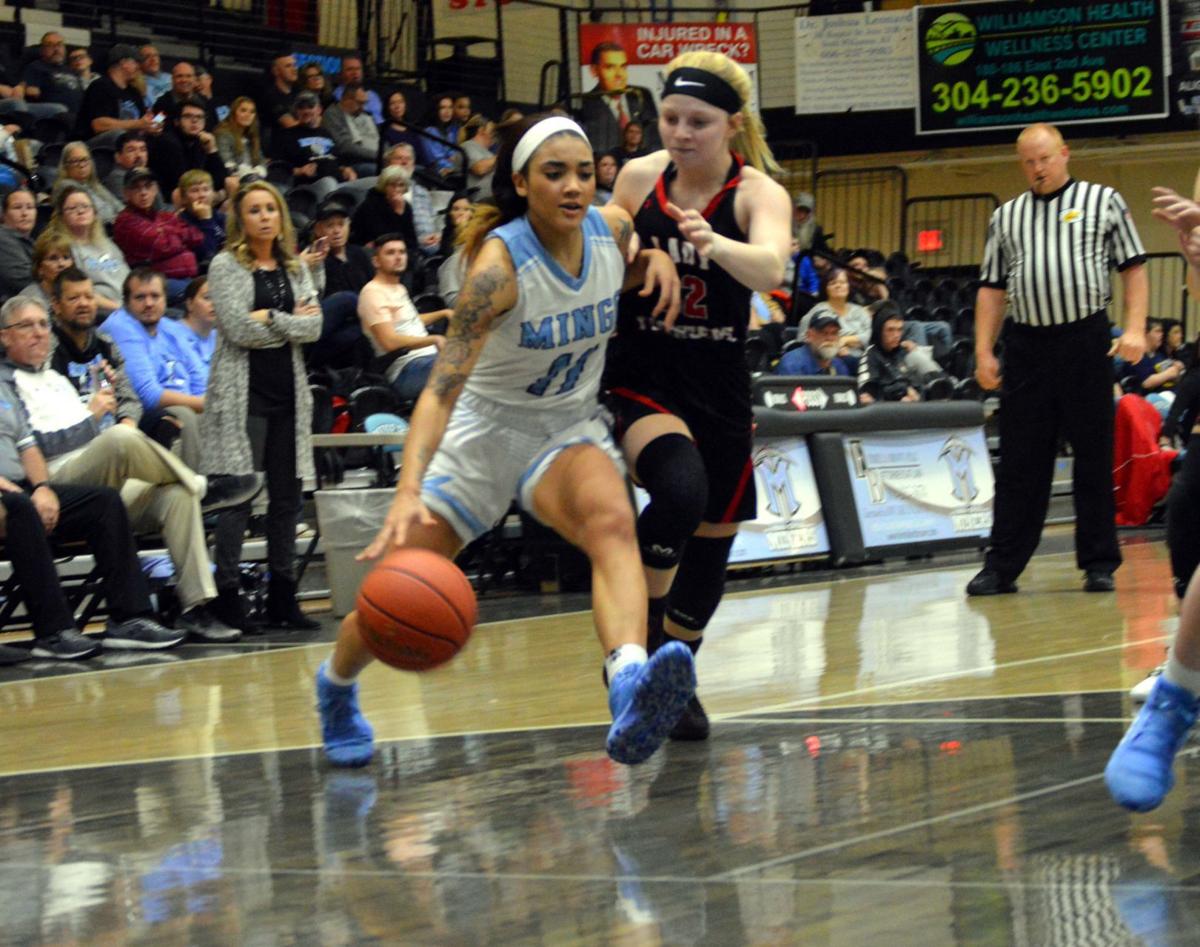 Mingo Central’s Ziah Rhodes drives the ball hard to the basket during the Lady Miners game against the Lady Pioneers on Jan. 14 inside the Mingo Central High School gymnasium.

Jarrid McCormick/Williamson Daily News Mingo Central’s Scarlett Thomason fired up a 3-pointer over a Wayne defender during the Lady Miners game against the Lady Pioneers on Tuesday, Jan. 14, 2020 inside the MCHS Gymnasium.

Jarrid McCormick/Williamson Daily News Mingo Central’s Jenna Wagoner prepares to launch a three-pointer during the Lady Miners game against the Lady Pioneers on Tuesday, Jan. 14, 2020 inside the MCHS Gymnasium.

Mingo Central’s Ziah Rhodes drives the ball hard to the basket during the Lady Miners game against the Lady Pioneers on Jan. 14 inside the Mingo Central High School gymnasium.

MAN — The Mingo Central Lady Miners picked up a pair of road wins this past week as they rolled past Man 48-36 and came from behind to beat Lincoln County 55-49. They also dropped a home game to Class AA No. 4 Wayne on Tuesday of last week by a final of 60-52.

In the game against the winless Lady Hillbillies, coach Kim Davis-Smith squad got off to a horrid start as they only scored four points in the opening period. Luckily for them, Man only tallied three and they took a 4-3 lead into the second quarter.

Both teams picked it up a bit in the second quarter as MCHS posted 14 points in the second but still only led by two going into the break at 18-16.

The Lady Billies continued to hang around as MCHS only led by four at 31-27 going into the fourth, but the final eight minutes was all Mingo as they won the stanza 17-9 to cruise to the 12-point win.

Senior guard Ziah Rhodes was the leading scorer for the Lady Miners as she scored 20 points while dishing three assists and grabbing four rebounds.

Junior Scarlet Thomason followed her with 12 points but struggled shooting the ball as she finished 4-18 from the floor and 3-15 from three-point range.

Martin grabbed 10 rebounds to lead the team and senior Zoe Evans did not score but dished four assists.

MINGO CENTRAL 55, LINCOLN COUNTY 49 (Jan. 17): The Kim Davis-Smith led Mingo Central Lady Miners picked up a big sectional win on the road this past Friday night as they came from behind in the second half and picked up a 55-49 win.

The Lady Panthers got off to a quick start to begin the game and led 12-8 after the first eight minutes of play, but MCHS responded in the second quarter to cut the LCHS lead to 21-18 going into the break.

In the second half the Lady Miners outscored Lincoln 18-13 in the third quarter to take a 36-34 lead into the fourth quarter. In the final eight minutes, MCHS would do what it takes to hold on for the six point road win.

Senior guard Ziah Rhodes carried the Lady Miners on this night as she scored 31 of the teams 55 points. She finished 13-26 from the floor. Scarlet Thomason joined her in double-figures with 15 points, including a trio of 3-pointers.

WAYNE 60, MINGO CENTRAL 52 (Jan. 14): The Mingo Central Lady Miners hung right with the No. 4 ranked Wayne Lady Pioneers on Tuesday night but could not pull off the upset as they fell by a final score of 60-52.

The Lady Pioneers led for most of the contest but coach Kim Davis-Smith’s Lady Miners kept the game within arms reach the entire contest. Wayne led by five at 14-9 after one quarter of play and extended that lead to seven at 27-20 going into the break.

The red-and-white extended their lead to double-digits in the second half and led by 10 at 45-35 going into the final eight minutes of play.

In the final stanza, the Lady Miners cut the lead all the way down to four after back-to-back steals and a bucket by Ziah Rhodes, but could not get any closer as the Lady Pioneers held on for the eight point road win.

Rhodes led MCHS in socring as she dropped in 23 points on the night on 7-13 shooting. Point guard Jenna Wagoner joined her in double-figures with 12 points and five assists while Scarlet Thomason followed them with nine.

Maliyah Martin and Zoe Evans rounded out the scoring for the Lady Miners with four points apiece, while Martin contributed 13 rebounds and Evans added seven.

The Lady Miners saw their season record move to 7-5 after their three-game stretch last week, and they were back in action on Monday and Tuesday night of this week, but scores and stats were not available by press time.

On Monday they were in action at Scott and on Tuesday they played at in-county rival Tug Valley. Check our website pr pick up next week’s WDN for reports from those games.

The Lady Miners then return home on Saturday and will play host to Man in the nightcap of the Miner Mountain Hoops Showcase. All four of the feeder school’s girls’ teams will play games prior to the 7:30 p.m. contest between the Lady Miners and the Lady Billies. Williamson will get the action started against Mt. View at 2:30 p.m., followed by Gilbert and Matewan at 4 p.m., and then Burch vs Logan at 5:30 p.m.