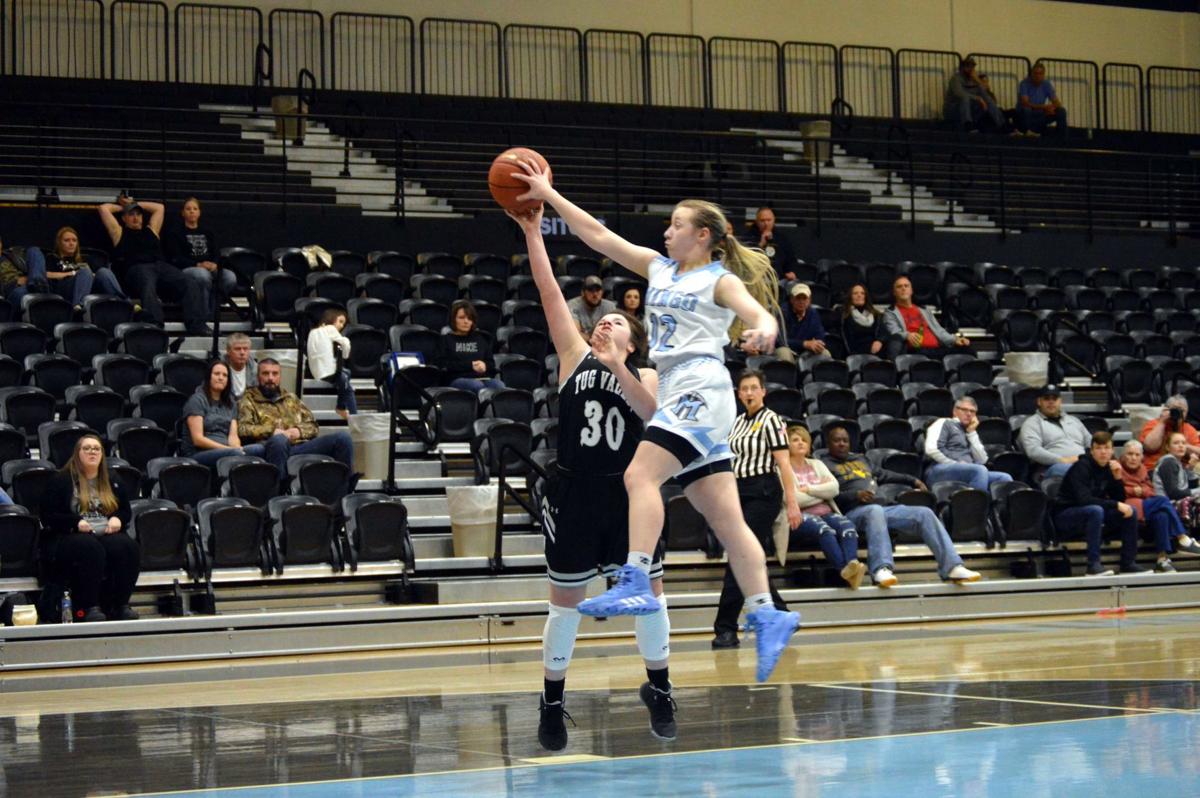 Mingo Central’s Jenna Wagoner races down the court and blocks the shot of Tug Valley’s Audrey Evans during the Lady Miners’ 73-57 win over the Lady Panthers on Saturday inside the Mingo Central High School gymnasium. 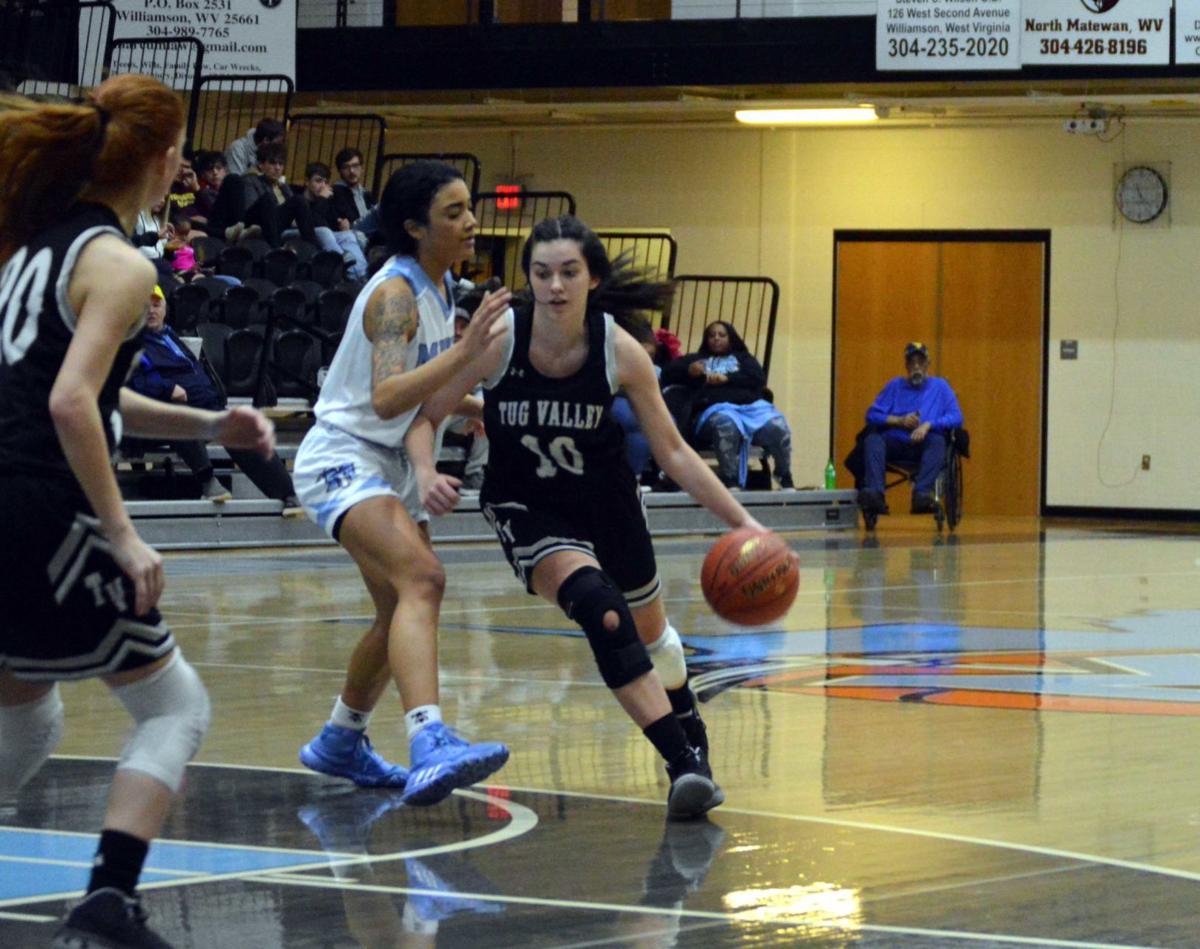 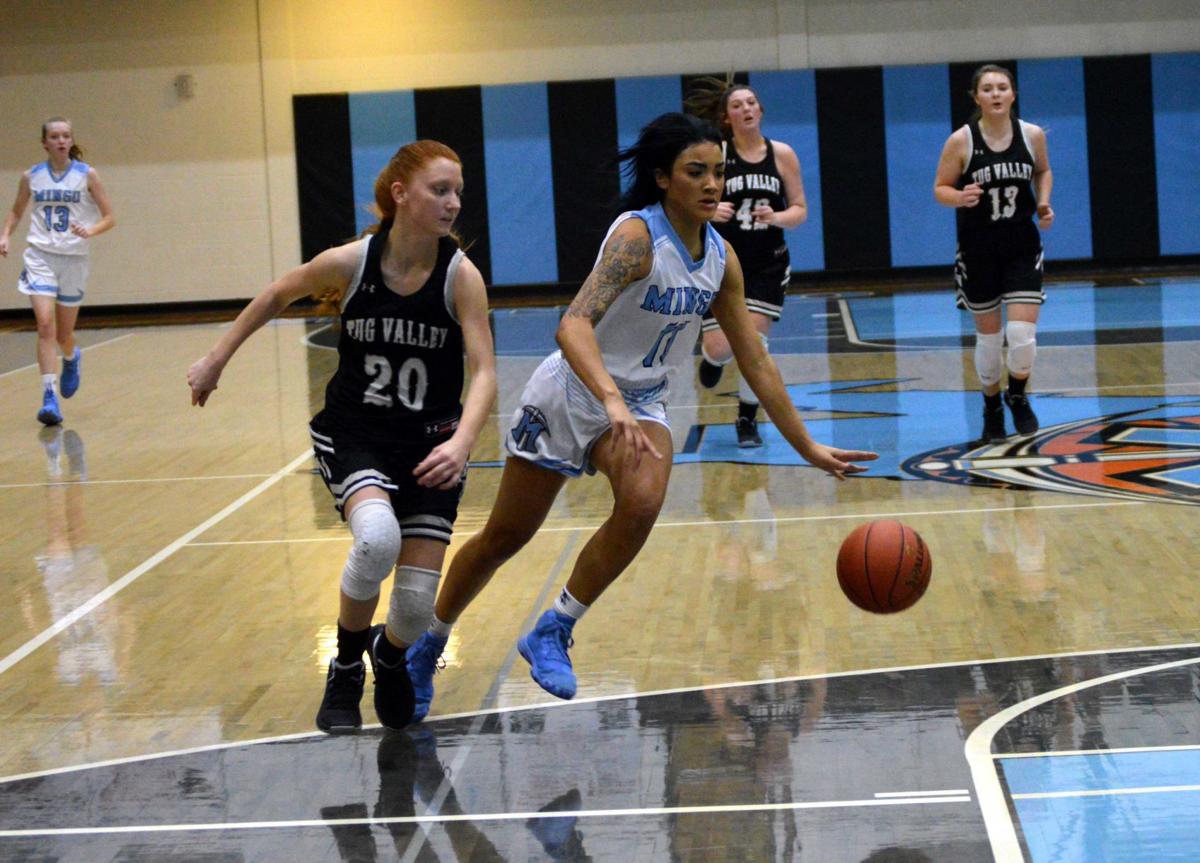 Jarrid McCormick/Williamson Daily News Mingo Central’s Ziah Rhodes drives the ball into the paint while Tug Valley’s Alyssa Newsome defends during the Lady Miners 73-57 win over the Lady Panthers on Saturday, Feb. 1, 2020 inside the MCHS Gymnasium.

Mingo Central’s Jenna Wagoner races down the court and blocks the shot of Tug Valley’s Audrey Evans during the Lady Miners’ 73-57 win over the Lady Panthers on Saturday inside the Mingo Central High School gymnasium.

Jarrid McCormick/Williamson Daily News Mingo Central’s Ziah Rhodes drives the ball into the paint while Tug Valley’s Alyssa Newsome defends during the Lady Miners 73-57 win over the Lady Panthers on Saturday, Feb. 1, 2020 inside the MCHS Gymnasium.

NEWTOWN — The Mingo Central Lady and Tug Valley girls basketball teams met up for the second time of the season on Saturday night in the MCHS Gymnasium.

It was the No. 9 ranked Lady Miners who came away with the 73-57 win over Class A’s No 10 ranked Lady Panthers and secured the season sweep over their in-county rival.

Coming out of the gate the two teams traded baskets back and forth in an exciting first quarter of play, with Mingo Central holding the slim 20-19 lead going into the second quarter.

Coach Kim Davis-Smith’s Lady Miners turned it up on the defensive end in the second half as they went to a full-court pressure that frustrated the Tug Valley offense and held them to only four points. The Lady Miners outscored TVHS 18-4 in the second to take a 38-23 lead into the halftime locker rooms.

Coming out of the break, coach Clyde Farley’s Lady Panthers scored the first four points of the third to trim the lead to 38-27. The Lady Miners responded however and outscored them 18-8 the rest of the quarter and took a 56-35 lead into the fourth.

The Lady Panthers would outscore Mingo 22-17 in the fourth quarter but it was all for naught as MCHS held on for the 16-point win.

Senior Ziah Rhodes had a monster game for the Lady Miners as she scored a game high 25 points on 15-30 shooting. Junior Scarlet Thomason also had a big game as she finished with 25 points, including seven trifectas, and grabbed 11 rebounds.

Point guard Jenna Wagoner joined them in double-figures with 11 points and dished seven assists while Madusyn Curry rounded out the scoring column with two.

Senior forward Maliyah Martin did not land in the scoring column but had a big impact on the game as she finished with 22 rebounds, including 10 on the offensive end, while also blocking three shots.

For Tug Valley, sophomore guard Kaylea Baisden led with 23 points on 9-28 shooting, including 3-13 from three-point range. Makayla May recorded a double-double with 10 points and 14 rebounds while Brooklyn Evans alos reached double-figures finishing with 11.

The loss for Tug Valley dropped them to 10-6 on the season while the Lady Miners saw their record improved to 12-6.

Tug Valley was back in action on Monday night against Van but scored and stats were not available by press time.

The Lady Panthers return to the court at home on Thursday in the 10th Annual Breast Cancer Awareness Game in memory of Tina Vance Stacy who was a 1992 graduate of TVHS. They will play Carter Christian in a 7 p.m. tip. TVHS will also play on Friday on the road at Grace Christian.

The Lady Miners only have four games remaining on their regular season schedule before they start tournament play.

They play two games against highly ranked teams this week as they travel to No. 5 Wayne on Thursday and then host the No. 4 ranked team in Class A in Summers County on Saturday in a 3 p.m. tip at Miner Mountain.

Here are game summaries from other games played by Tug Valley and Mingo Central this past week:

MINGO CENTRAL 68, HERBERT HOOVER 46 (Jan. 28): The Mingo Central Lady Miners cruised to an easy Cardinal Conference victory at home on Tuesday of last week as they defeated Herbert Hoover by a final score of 68-46.

The Lady Miners had a balanced scoring attack that saw four players land in double-figures, with Ziah Rhodes leading the way with 22 points. Junior Scarlet Thomason was right behind her with 15, Jenna Wagoner tallied 12, and Maliyah Martin recorded a double-double with 11 points and 11 rebounds.

Senior Zoe Evans added six points and 11 rebounds for the blue-and-white while Chelsee Mollett rounded out the scoring column with two points.

Allison Dunbar led the scoring for the Lady Huskies with 17 points.

The Tug Valley Lady Panthers lost a tough game on the road at sectional foe Tolsia on Thursday night as the Lady Rebels squeaked out the 67 to 66 victory in overtime.

The Lady Rebels jumped ahead early on in front of a raucous home crowd as they led by double-digits at 30-19 going into the halftime locker rooms.

The two teams traded baskets in the third quarter as Tolsia kept a 42-31 lead going into the fourth, before Tug Valley made their comeback.

Sophomore guard Kaylea Baisden came alive and scored 14 of her 27 points in the fourth quarter, including four three-pointers as they came all the way back to force overtime.

Baisden added seven more points in the extra stanza, including two more three-pointers, but it was not enough as the Lady Rebels held on for the one-point victory.

Baisden led Tug Valley with her 27 points while Makayla May was right behind her with 25. May scored 10 points in the second quarter and eight more in the third.

Autumn Block led Tolsia with 19 points while Selena Browning was right behind her with 16.

The two teams split the season series, as Tug Valley won 58-40 on Jan. 9 in Naugatuck.

The Mingo Central Lady Miners lost a tough sectional contest at home on Friday night against Lincoln County by a final score of 60-52.

The visiting Lady Panthers jumped ahead early on against the Lady Miners and never looked back, securing the game down the stretch at the charity stripe.

Scarlet Thomason led MCHS with 18 points on the night on 7-17 shooting, including 4-14 from deep. Madisyn Curry followed her with 14 points and nine rebounds off the bench while Ziah Rhodes was held to 11 points.

Megan Adkins and Zoe Evans each scored a point to round out the scoring column for MCHS. Evans also grabbed 12 rebounds while Martin yanked down 14.