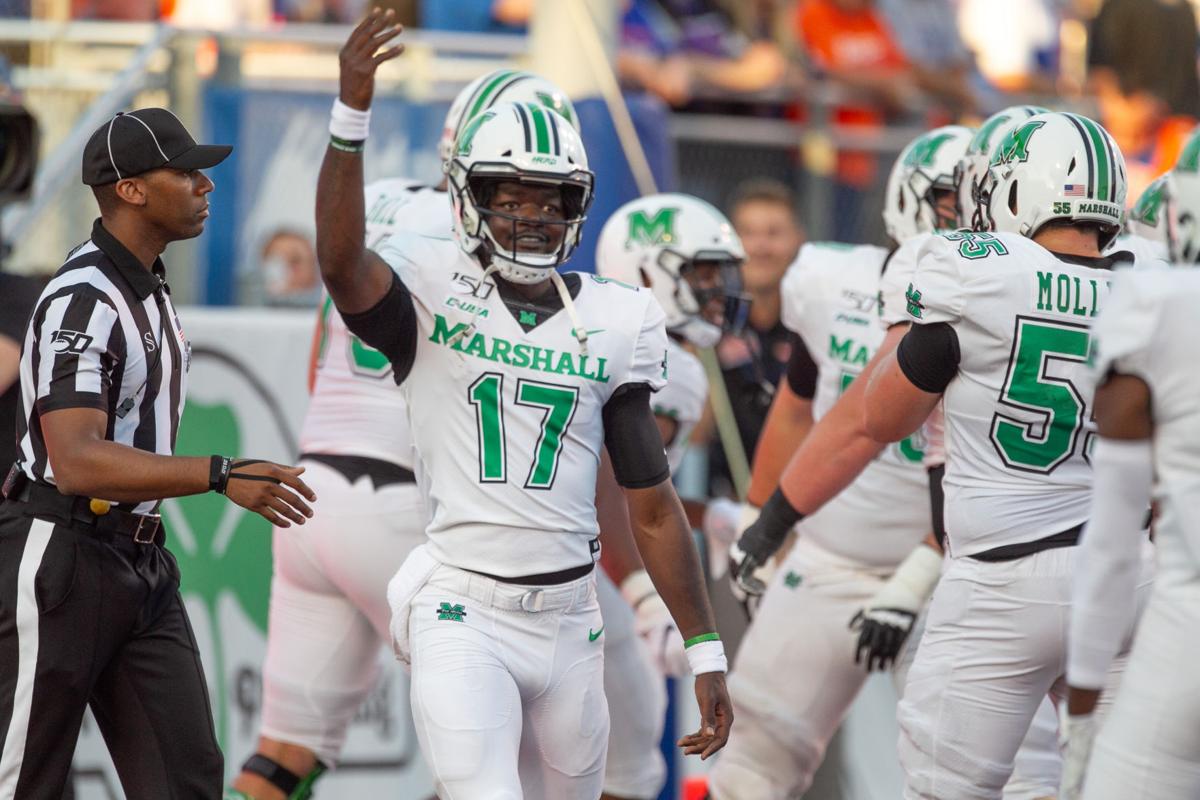 Marshall quarterback, Isaiah Green waves to Herd fans after a Marshall touchdown in the first half of an NCAA football against Boise State.

Marshall quarterback, Isaiah Green waves to Herd fans after a Marshall touchdown in the first half of an NCAA football against Boise State.

HUNTINGTON - Throughout Friday night's 14-7 loss to No. 24 Boise State, it seemed as if Marshall was just one big play away from turning things around.

But that's just it.

There was no big play - not even a little play - to be had against the Broncos' stout defense at Albertsons Stadium.

Despite the defense keeping Marshall in the game throughout, the Thundering Herd offense was stymied in the second half, gaining zero yards on merely 14 plays.

"Our defense played well," Marshall head coach Doc Holliday said. "Offensively, we've got to make more plays. We had a couple turnovers there that we shouldn't have had. Boise is an excellent football team, but I think we're a good football team as well. It was just a battle."

Marshall's final offensive play proved to be its most costly as quarterback Isaiah Green was picked off by Boise State's Kekoa Nawahine, who out-battled wide receiver Artie Henry for position on a corner route to come up with the game's biggest defensive moment.

At the time, Marshall's defense had momentum after forcing two turnovers and a punt, which gave the Herd possession near midfield.

Green's interception was a microcosm of the frustrating day for Marshall in its passing game.

The Herd's sophomore quarterback finished just 10 of 17 for 56 yards with the interception while being unable to connect on anything down the field.

That lone vertical completion loosened up the Boise State defense in the box a bit, allowing for some holes within the running game that Knox took advantage of.

After that, however, Marshall's lack of a vertical threat led to Boise State being able to bring extra hats into the box, which led to some different looks at the line of scrimmage for Green.

Boise State's defensive alignment essentially took Marshall's running back tandem of Tyler King and Brenden Knox out of the equation in the second half, forcing Green to adjust calls at the line, based on what he saw.

Out of the Herd's 14 plays in the second half, Knox had two carries for eight yards while King did not have a carry and was targeted once in the passing game - an incompletion.

"They made adjustments and we left some opportunities out there," Green said. "At the end of the day, they made more plays than we did."

While Holliday and Green said the team needed to convert offensively better, much of Marshall's offensive woes are credited to Boise State's overall strength as a defensive unit.

Through two weeks, the Broncos have been lights out defensively in the second half, shutting out both Marshall and Florida State en route to tight wins.

So what was the key to Boise State's second half defensive success?

"They were able to get some pressure on me today and they switched up a lot of coverages they showed on film," Green said of the Broncos' defense. "That's the main two things I saw."

Marshall had 113 yards in the first quarter, but amassed just 59 yards over the final three quarters, thanks in part to not sustaining possession. Marshall did not have a drive of more than three plays in the second half.

When running such a limited amount of plays, each mistake is magnified, and that was the case on Friday night. In addition to the costly interception, the Herd had a few false start penalties that put the team behind the sticks.

Those little miscues turn into big issues, which bothered the Herd players the most after a loss that they feel could've turned out different.

"This hurts," Knox said. "This hurts pretty bad, but it's just a stepping stone for next week."

Marshall takes on rival Ohio in the Battle for the Bell at 6:30 p.m. on Saturday at Joan C. Edwards Stadium.