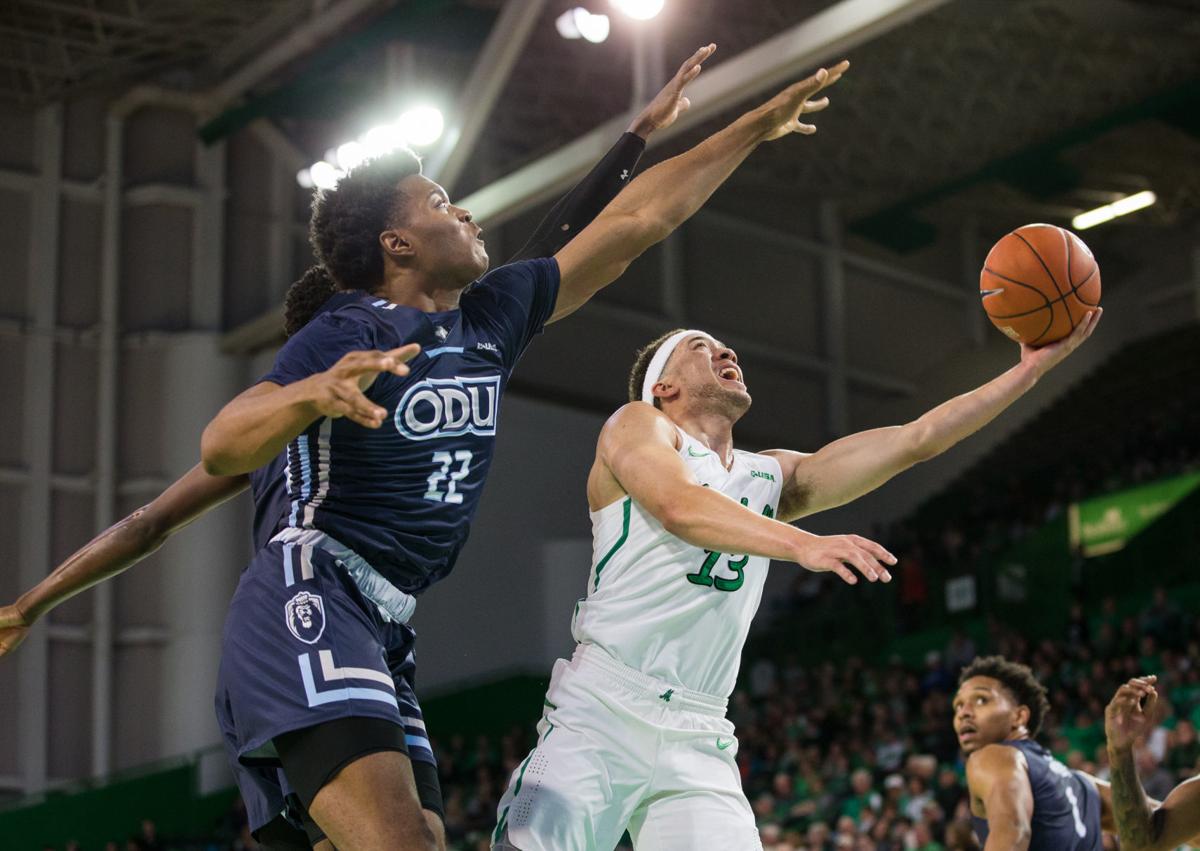 Marshall’s Jarrod West (13) drives to the rim for a layup attempt past Old Dominion’s Kalu Ezikpe (22) during an NCAA game on Saturday at the Cam Henderson Center in Huntington. 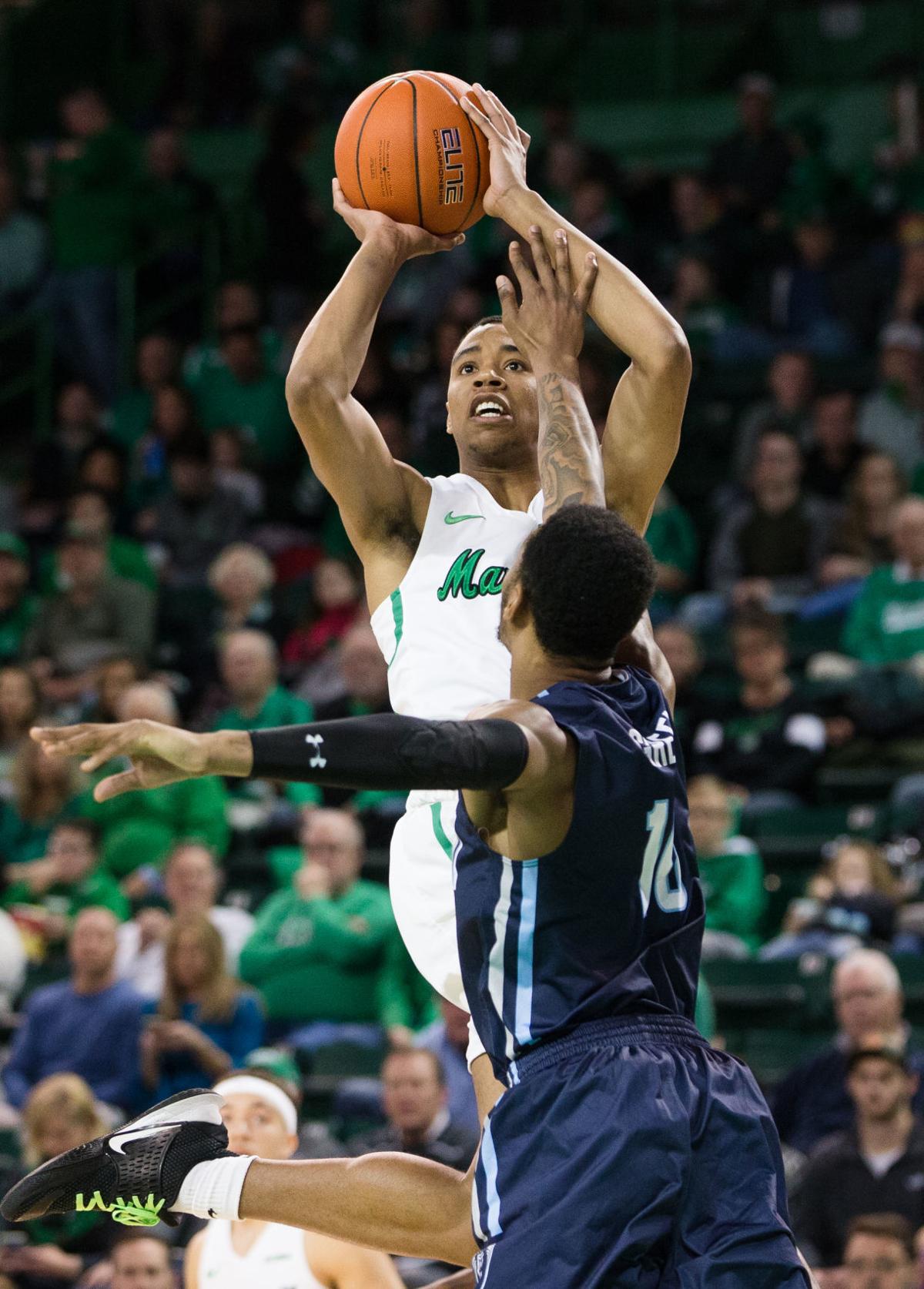 Marshall’s Taevion Kinsey puts up a shot over Old Dominion defender Xavier Green (10) during an NCAA men’s basketball game on Saturday, Jan. 18, 2020, at the Cam Henderson Center in Huntington, W.Va. 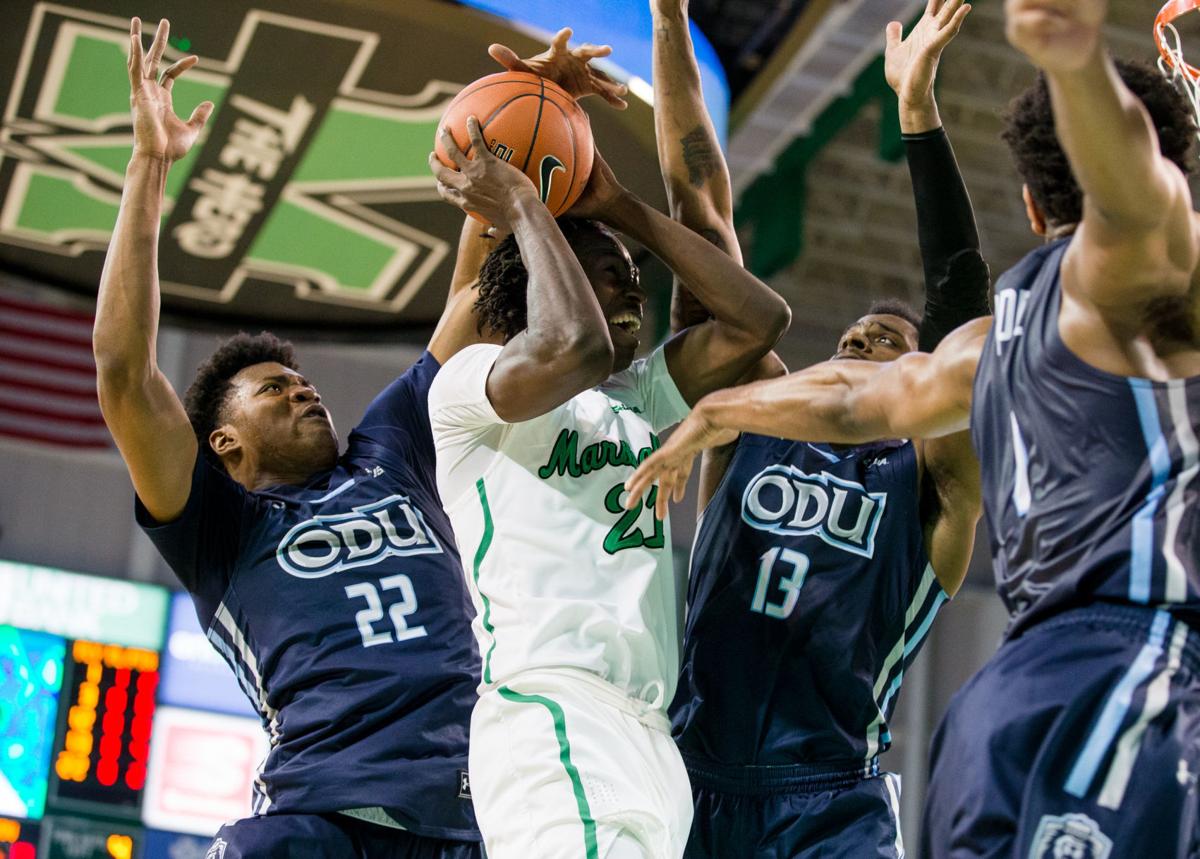 Marshall’s Jarrod West (13) drives to the rim for a layup attempt past Old Dominion’s Kalu Ezikpe (22) during an NCAA game on Saturday at the Cam Henderson Center in Huntington.

Marshall’s Taevion Kinsey puts up a shot over Old Dominion defender Xavier Green (10) during an NCAA men’s basketball game on Saturday, Jan. 18, 2020, at the Cam Henderson Center in Huntington, W.Va.

HUNTINGTON — Marshall’s men’s basketball team was sick of being on the wrong side of close basketball games.

On Saturday evening, the Thundering Herd finally did something about it.

Jarrod West hit a key 3-pointer with 1:13 left and had a pair of key defensive stops down the stretch to lead Marshall to a 68-67 win over Old Dominion in front of 6,445 fans at Cam Henderson Center.

“This is the first game we’ve won this close, and you grow from that,” Marshall head coach Dan D’Antoni said. “I know the Huntington fans will be patient.”

West’s 3-pointer gave Marshall a 67-65 advantage with 1:13 left, but Old Dominion tied it up with 47 seconds left and had possession with a chance to take the lead after a turnover.

That’s when West went to work, forcing Old Dominion’s Malik Curry into a turnover that led to a foul on Taevion Kinsey, who made one of two free throws for a one-point advantage.

As Old Dominion brought the ball up with a chance for the win, West again forced Curry into a difficult shot and the rebound bounced around in a forest of arms until West fought through the crowd for the rebound to secure the win.

“I don’t think you can talk about him without using the word ‘tough,’” Jones said. “He’s just a tough kid. He’s tough-minded, he’s physically tough. He’s not afraid to take a big shot in a big moment.”

West finished with 15 points and tied for a team-best six rebounds. Marshall was led by Kinsey, who scored 18 points.

For Old Dominion (6-12, 2-3 C-USA), it was another gut-wrenching defeat with victory within its grasp. The Monarchs led Western Kentucky by double figures on Thursday night before falling by two points and then suffered a similar fate at the hands of the Herd on Saturday.

“It’s tough for our kids losing these close ones when they are giving everything that they can,” Jones said. “We’ve just got to get to be a little bit better at finishing.”

Marshall won despite being outrebounded, 51-33, in the contest; 25 of those Old Dominion rebounds came on the offensive end, which led to 22 second-chance points, 18 of them in the second half.

The Herd was able to overcome the rebounding disadvantage by locking down defensively, including an eight-minute stretch in which the Monarchs did not have a field goal.

That stretch produced a 64-57 lead with 5:25 left following a baseline fadeaway from Kinsey. It was Marshall’s biggest lead of the contest.

While Kinsey and West again led the team, the complementary play for the Herd was much improved from Thursday’s loss to Charlotte.

Iran Bennett added 12 points and six rebounds — all offensive — while providing a defensive presence down low. Fellow center Goran Miladinovic also had one of his better games of his young career with seven points, including five straight as the Herd erased a deficit.

Marshall took a 34-31 lead into the locker room, courtesy of a West 3-pointer late in the half that gave the Herd an advantage in a back-and-forth affair. The Herd was able to limit Old Dominion’s Xavier Green to just nine points on 4-of-15 shooting from the floor.

Curry led the Monarchs with 20 points while Jason Wade added 15 points and nine rebounds. Aaron Carver also had nine points and 17 rebounds for Old Dominion in the loss.

Marshall returns to action on Wednesday when the Herd hosts Western Kentucky in the first of a home-and-home set next week. The Herd returns the trip to Bowling Green, Kentucky, next Saturday.

CHARLOTTE 77, MARSHALL 75: Marshall sophomore Taevion Kinsey looked to the heavens as time ran off the clock of Thursday night’s 77-75 loss to Charlotte at Cam Henderson Center.

Kinsey had just connected on a 3-pointer from beyond half-court that left the Thundering Herd one basket short as the 49ers celebrated the road victory to remain undefeated in men’s Conference USA basketball.

The shot capped a 29-point performance for Kinsey, but there was no solace as the Herd dropped its second-consecutive Conference USA matchup and fell to 8-10 on the season and 2-3 in Conference USA.

In fact, it almost made Kinsey even more furious.

“It’s a tough one, man,” Kinsey said. “We’ve got to keep fighting. (There’s) definitely got to be some fire in us. I don’t see enough fight right now.”

Perhaps the most frustrating aspect for Kinsey and fellow guard Jarrod West, who added 18 points and five assists to complement Kinsey’s performance, is that — in their mind — the Herd didn’t play well at all offensively, but was still within just one possession of the Conference USA league leader.

Marshall head coach Dan D’Antoni praised Kinsey and West for their performances and said the Herd is close to being one of the league’s best, but it will take more guys with the attitude of his two leaders to push the Herd over the top.

“I’ve got two warriors, I know that, in Taevion and Jarrod,” D’Antoni said. “We’ve got to get some people playing and moving their game up to the competitive level.”

While Marshall struggled to find guys to aid Kinsey and West, Charlotte (10-5, 4-0 C-USA) had no such issues, getting key contributions from role players, which provided the cushion for the win.

The biggest contribution came from Amidou Bamba down low as he tied for the team lead in points (16) and rebounds (6) while out-scrapping Marshall’s post presence of Iran Bennett and Goran Miladinovic, who combined to go 3 of 10 from the floor with only six combined rebounds — one defensive.

“They’re so big and long on the interior that we did not know that was going to be an area where we’d be able to benefit tonight,” Charlotte coach Ron Sanchez said. “I think Bamba did a great job of playing around the basket.”

Bamba’s efficiency forced Marshall’s defense to also pay more attention to him, which opened the floor for Jahmir Young and Jordan Shepherd to work, which paid dividends during a crucial 8-2 run in the second half.

Marshall cut the lead to 54-49 on a basket by Kinsey off an inbounds play, but Young scored five straight and Shepherd completed a three-point play at the rim, which ballooned the lead back out to double digits, where it stayed until just 90 seconds remained in the game.

Young also finished with 16 points and six rebounds while Shepherd added 14 in the win.

It came after the duo combined for just seven points in the first half.

Despite their two leading scorers not contributing much, Charlotte took a 34-25 lead into the locker room after a 19-4 run in which Marshall’s offense struggled to find itself after a strong start.

During the run, missed shots at the rim and turnovers led to baskets in transition — most notably, three 3-pointers from Cooper Robb that forged the advantage. Robb also finished in double figures with 13 points for Charlotte.

“I know we let No. 10 get open a couple times and he made some 3s,” West said. “That hurt off the bench. We can’t allow that, knowing he’s a shooter.”

Early on, Marshall looked as if it had bounced back from its loss at UAB, serving as the aggressor early, using a 10-0 run to take a 17-12 lead.

However, the wheels fell off from there on the offensive end as Marshall had just three field goals in the final 11:49 of the first half.

Marshall looks to halt its two-game losing streak when the team returns to action at 7 p.m. on Saturday against Old Dominion at Cam Henderson Center.

Marshall takes on Old Dominion during an NCAA men’s basketball game on Saturday, Jan. 18, 2020, at the Cam Henderson Center in Huntington, W.Va.