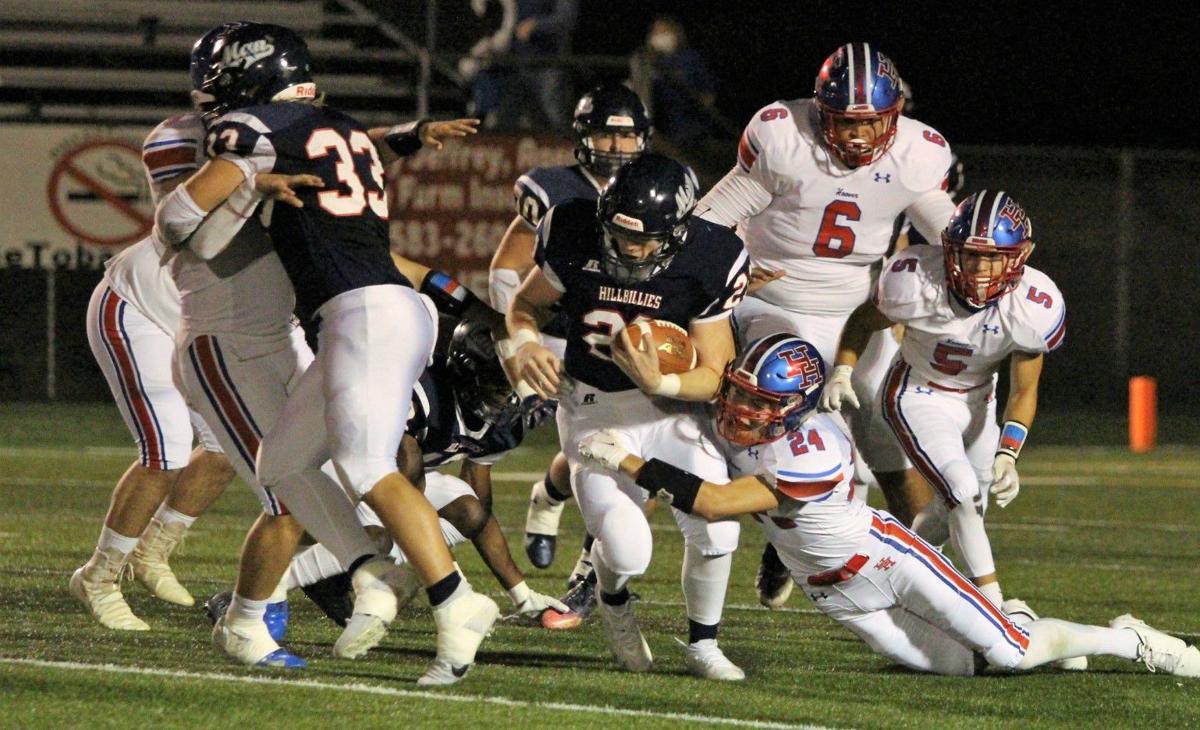 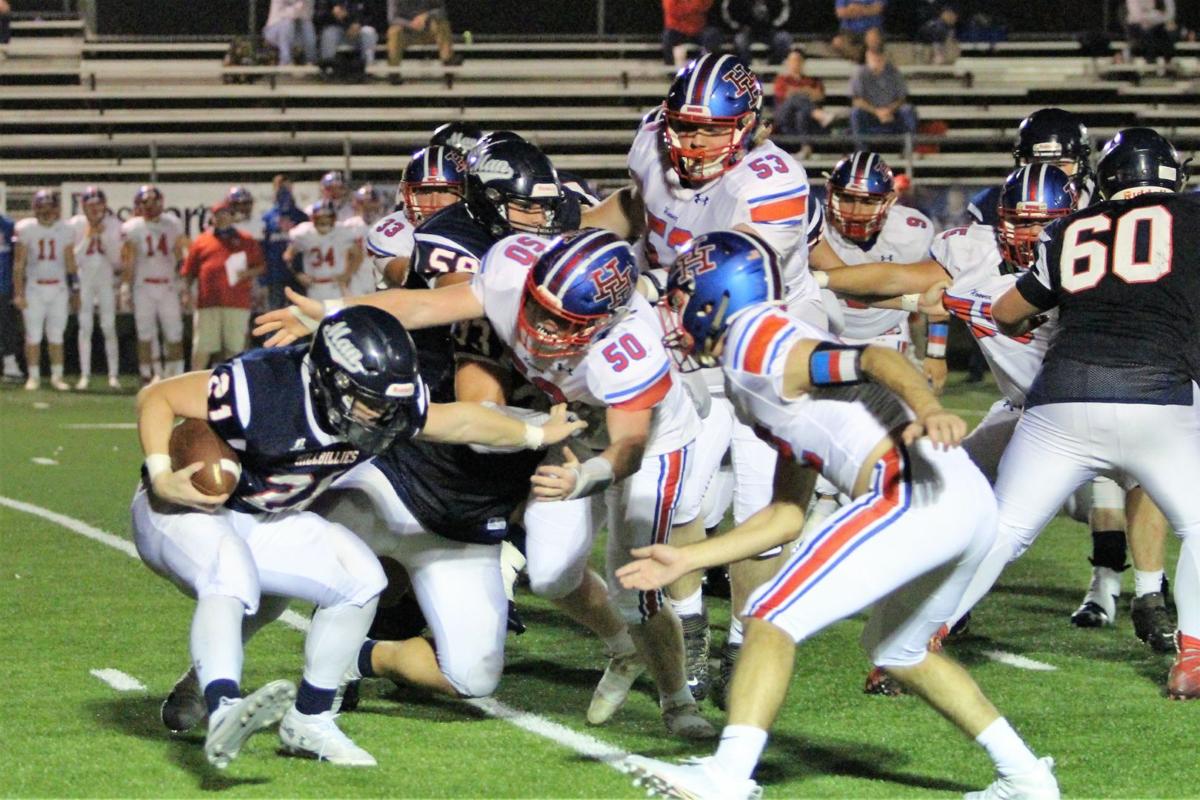 Man High School’s Cameran Frye is tackled in the Hillbillies’ 42-12 loss to Herbert Hoover on Tuesday, Oct. 20 at Man. 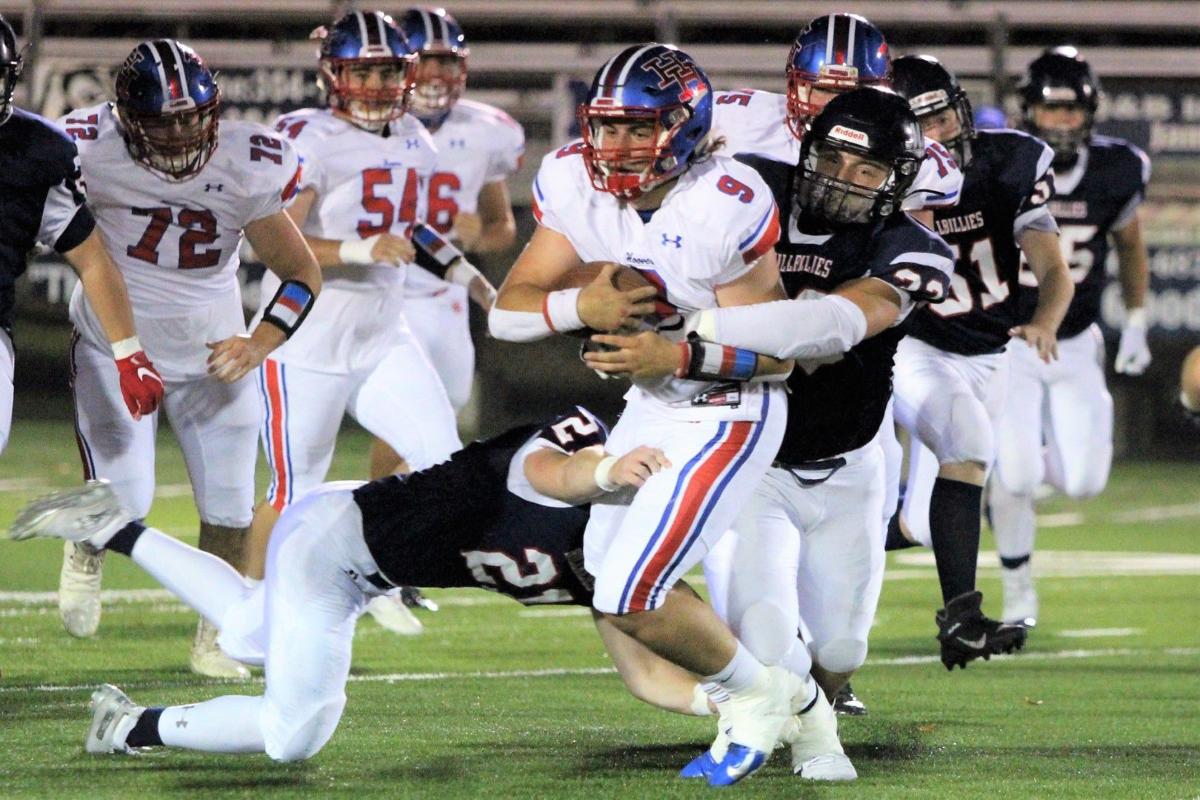 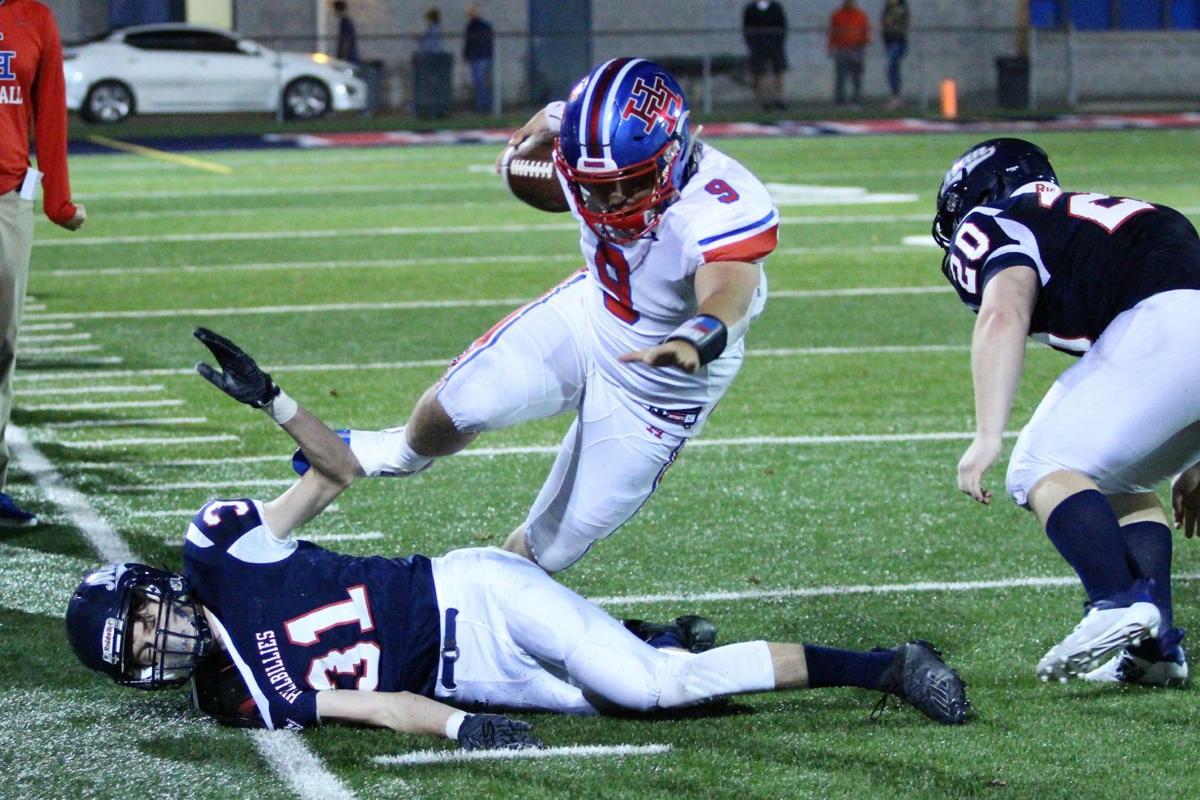 Herbert Hoover’s Nick Grayam runs for positive yards along the sideline in Tuesday night’s game. Defending on the play for Man is Chris Isaacs (31) and Nick Plumley (20). 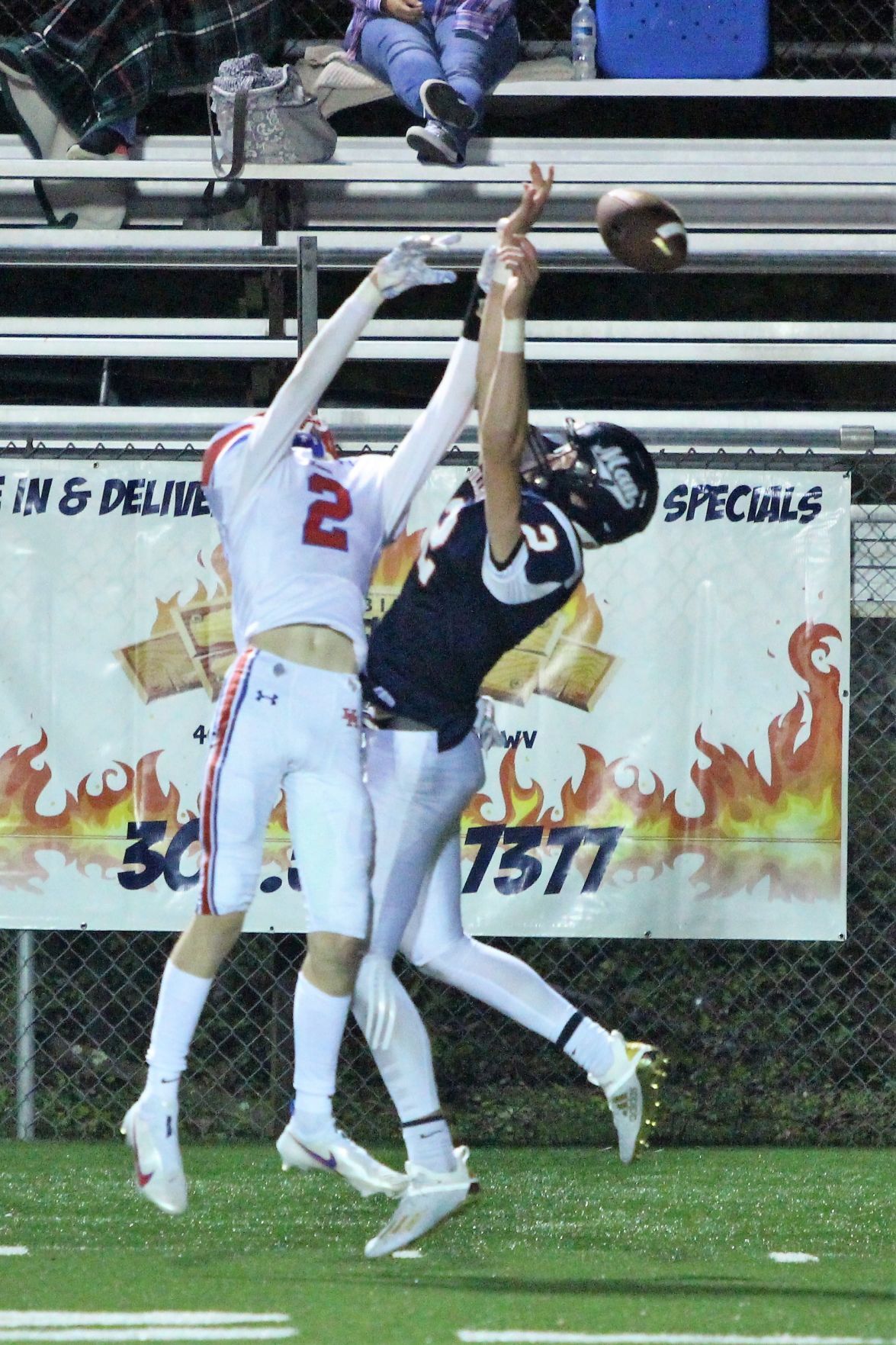 Man High School’s Cameran Frye is tackled in the Hillbillies’ 42-12 loss to Herbert Hoover on Tuesday, Oct. 20 at Man.

Herbert Hoover’s Nick Grayam runs for positive yards along the sideline in Tuesday night’s game. Defending on the play for Man is Chris Isaacs (31) and Nick Plumley (20).

MAN — Herbert Hoover and Man didn’t know they were going to be playing each other until only a few days ago.

It’s the wild wild west of scheduling in the COVID-19 world which has become the norm in this irregular season.

It’s play when you can, where you can and who you can.

Herbert Hoover was glad they made the trip down to the southern West Virginia coalfields as the Huskies pulled away for a 42-12 win over the Hillbillies at Man’s George A. Queen Memorial Field on Tuesday night.

Herbert Hoover improved to 2-1 on the season with the win, while Class A Man dropped to 1-3. The Hillbillies, playing its second game in four days, were without starting quarterback Israel Canterbury and top tailback Josh Moody as both were out due to injuries suffered in last Friday’s 40-21 loss at home to Point Pleasant.

The Huskies were coming off a decisive 49-13 win at Nitro last Tuesday and were able to make it two in a row.

Herbert Hoover was led by quarterback Nick Grayam who was 16 of 22 passing for 144 yards and a touchdown on the night unofficially. Grayam also rushed 18 times for 70 yards.

Hunter Bartley also had a big game, rolling up 137 yards on 22 carries and three touchdowns.

Hoover first-year coach Joey Fields, a former head coach at Mingo Central, who was making his return to the coalfields, was pleased with the win.

“That’s a good, physical football team,” Fields said of Man. “(Man) Coach (Harvey) Arms will play anybody. It’s about getting games and getting on the field so these guys can play. I’m having a blast with these kids. We told our guys that we have to play four quarters and we preach that every day. I don’t know if I’ve been around that many teams that when things go bad they just play to the next play. That’s why we are being successful.”

Fields said his offensive line was able to get a good push for most of the night and that opened the holes for Bartley and the running game.

“The offensive line that’s where that started,” he said. “We are playing well. We just need more time to play. We didn’t have any turnovers tonight so that’s two weeks in a row. In week one it was five.”

Man coach Harvey Arms said his team just could not stop the Huskies, especially in the second half.

Since the game was announced just a few days ago, neither team had much time to prepare.

That’s the way it’s been in this crazy season.

“It was just a few days ago and that’s the way the season has been for us,” Arms said. “We are still looking to find someone to play on Friday or Saturday. It’s a tough proposition. Our schedule has not been anything close to what we thought it would be other than the fact that we played Point Pleasant, Wheeling Central and Mingo Central but none of them were in the place that we thought we’d play them. We will play anybody and if we don’t these kids won’t be able to play.”

The game was close for the first half and see-sawed back and forth.

Hoover then pulled away in the second half.

Hoover then put it into overdrive.

Zack Paxson intercepted a tipped pass from Jeremiah Harless at the Man 45 and rumbled all the way to the Billies’ 3-yard line.

Then on the very next snap, Bartley scored his third and final touchdown of the night as he rolled in from 3 yards out, giving Herbert Hoover a 35-12 lead with 4:40 left in the game.

Hoover then scored one more touchdown with 1:57 left as Grayam found Jacob Burns on a 17-yard scoring strike with 1:57 to go in the game to finish out the scoring at 42-12.

The Huskies took a 14-12 lead at the 1:15 mark of the second quarter as Grayam scored on a 1-yard TD plunge. The extra point kick by David Good was good.

On the previous play, the Huskies were able to covert on a fourth-and-four play from the 4-yard line as Bartley ran for 4 yards to set up the touchdown.

Man had taken a 12-7 lead with a 68-yard bomb down the sideline from Harless to Justin Grimmett. The two-point conversion failed but the Billies led 5:14.

After a scoreless first quarter, Man’s Erick Grimmett put the Billies on top 6-0 with a 1-yard TD plunge. The PAT was muffed. The drive was kept alive after the Huskies were flagged for pass interference on a fourth-and-seven play at the 9, giving Man a first-and-goal.

Herbert Hoover answered on its next drive with a 2-yard TD run by Grayam at the 6:24 mark of the second quarter. After the Good PAT, Hoover led 7-6.

Harless, Man’s backup quarterback, completed 4 of 16 passes for 113 yards on the night.

Man and Herbert Hoover hadn’t played each other since 1996. The Huskies hold a 5-1 all-time series advantage. The only Man victory over the Huskies was a 17-13 win in 1993.

Man is scheduled to return to action on Thursday, Oct. 29 at home against Tug Valley. As of Tuesday night, the Hillbillies did not have a game scheduled for this coming weekend.

The Huskies are slated to travel to far-off Moorefield this Friday night in a 7:30 p.m. kickoff. Three more games, all away, are on the schedule for Hoover — Oct. 27 at Scott, Oct. 30 at Poca and Nov. 6 at Logan.