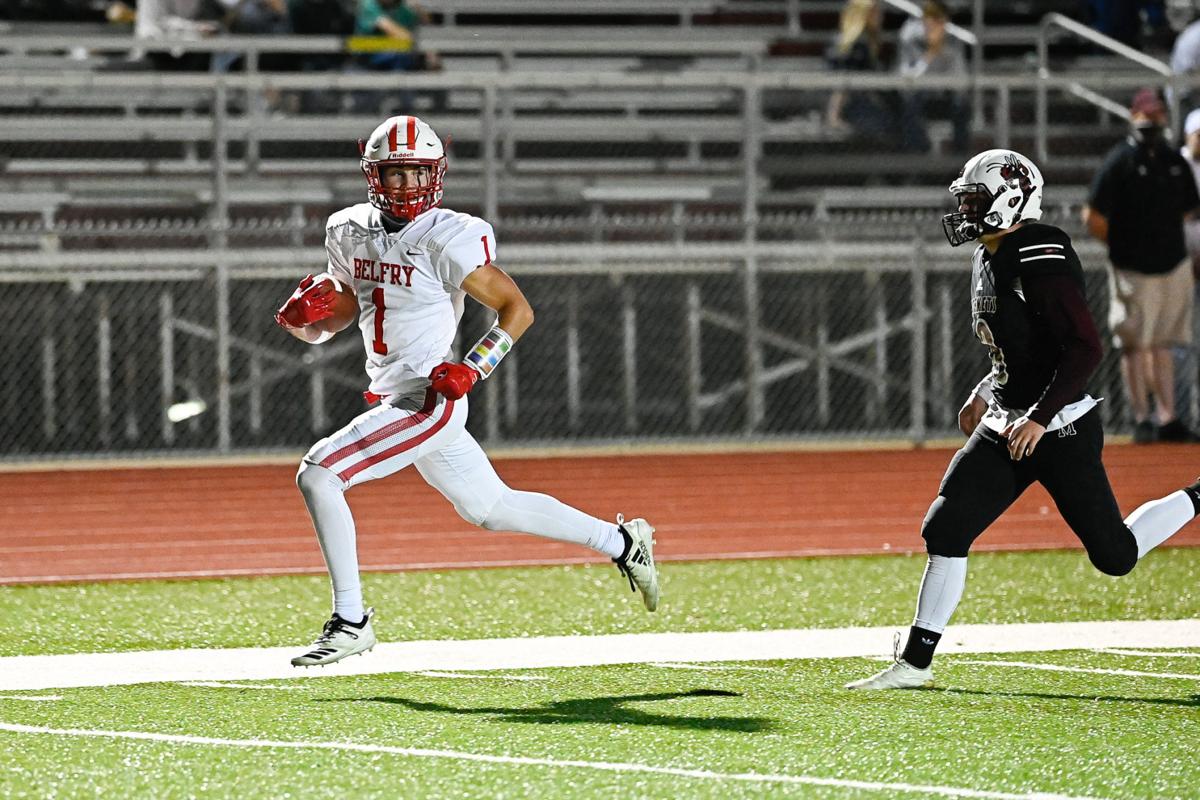 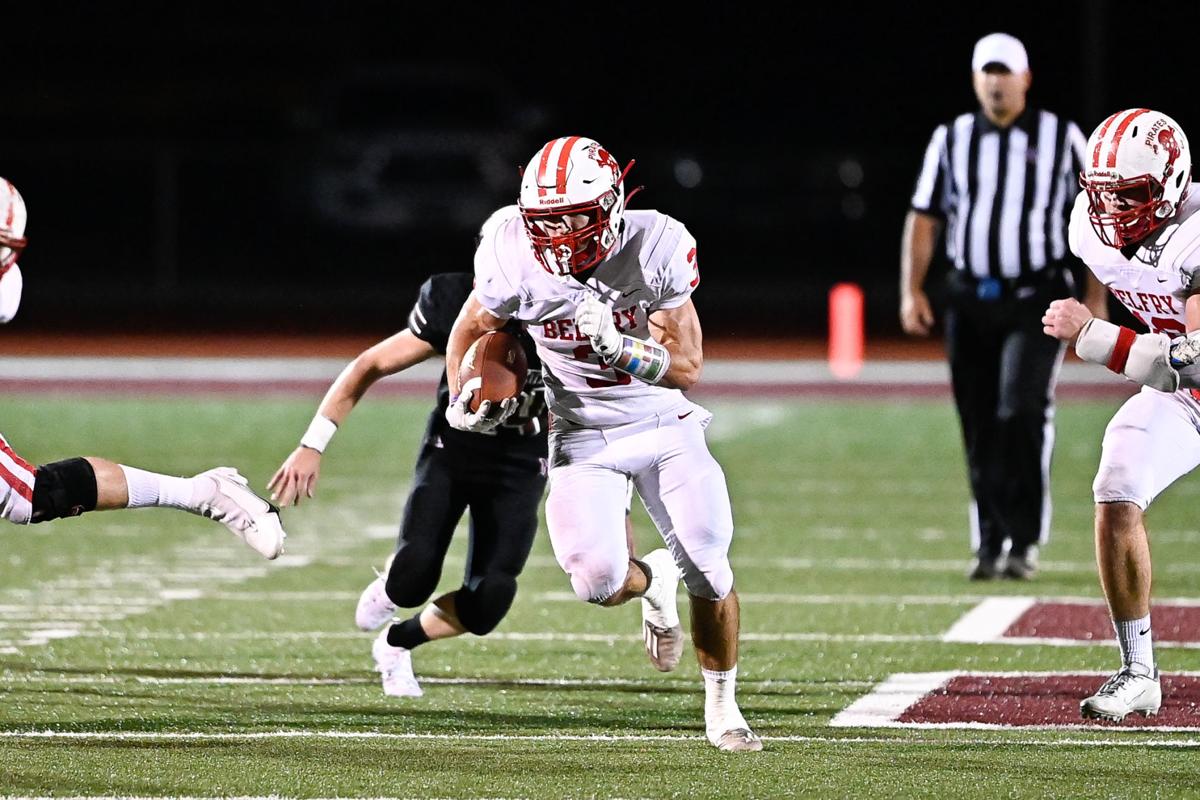 Belfry running back Isaac Dixon breaks free for one of his six touchdowns in the Pirates 59-20 win over Magoffin County on Friday, Sept. 25, 2020 in Salyersville, Kentucky. 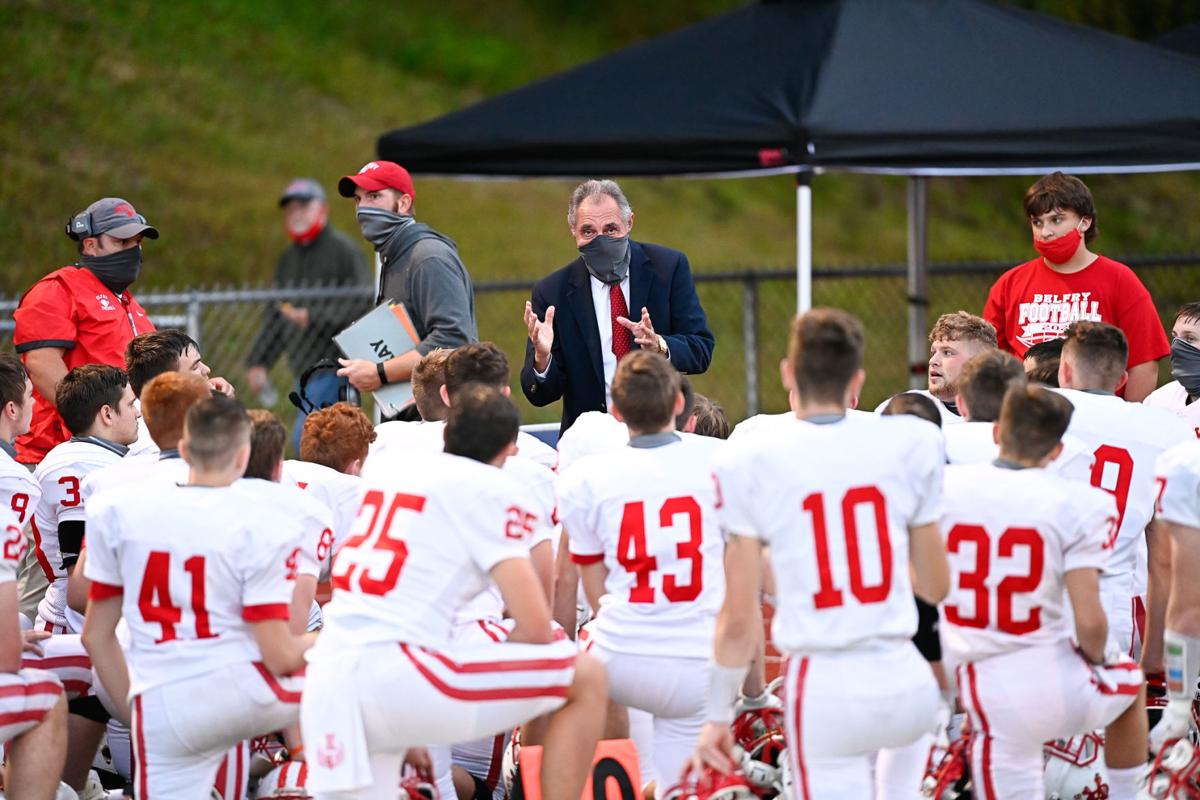 Ray Justice Photography Longtime Belfry head football coach Philip Haywood dons his mask as he speaks with his team prior to the Pirates 59-20 win over Magoffin County on Friday, Sept. 25, 2020 in Salyersville, Kentucky.

Belfry running back Isaac Dixon breaks free for one of his six touchdowns in the Pirates 59-20 win over Magoffin County on Friday, Sept. 25, 2020 in Salyersville, Kentucky.

Ray Justice Photography Longtime Belfry head football coach Philip Haywood dons his mask as he speaks with his team prior to the Pirates 59-20 win over Magoffin County on Friday, Sept. 25, 2020 in Salyersville, Kentucky.

SALYERSVILLE, Ky. — The Belfry Pirates played their first District game of the 2020 season this past Friday night as they went on the road and cruised past Magoffin County by a final score of 59-20.

The Pirates (2-1) received a dominating performance from running back Isaac Dixon, as the senior playmaker reached the end zone six times on the night.

Dixon carried the ball eight times in the game for a total of 258 yards and four touchdowns to go along with a 34-yard receiving score and a 90-yard kickoff return.

Five of Dixon’s six touchdowns came in the first half as coach Philip Haywood and the Pirates jumped ahead to a 34-0 lead and held a 46-12 lead at the break.

Belfry ran through the Hornets (2-1) with their ground game as they had 32 carries for 433 yards in the game.

QB Brett Coleman tossed two touchdowns on the day as he finished the contest 4-6 passing for 76 total yards.

Dixon caught one TD strike while senior receiver Tyler Chaffin hauled in the other, a 37-yard pass early in the second quarter. Chaffin also rushed one time for 45 yards.

The Pirates improved to 9-0 all-time against the Hornets on the gridiron as coach Haywood picked up career win No. 451.

Belfry returns to action this Friday night at home in another district matchup, this time against the Floyd Central Jaguars.

Floyd Central enters the contest with a 2-1 record on the season after they were handed their first loss this past weekend in a 70-50 shootout against Pike Central.

The Jaguars started the season off 2-0, picking up wins against Hazard 24-21 in week one and Prestonsburg 22-12 in week two.

Floyd Central is lead by longtime high school coach Shawn Hager. Hager has been the head man at FCHS since the school opened in 2017.

QB Caleb Hager does it all for the Jaguars as he is the teams leading rusher from under center. Through the first three games, he has 286 yards rushing and five TDS.

Through the air, Hager has completed 15-39 passes for 257 yards, three TDs, and two interceptions. All through touchdown passes have been to receiver Brant Potter, who has seven total catches for 154 yards in three games.

BHS is 4-0 all-time against Floyd Central, including two defeats a season ago. The Pirates won 41-6 during the regular season and then won again 46-7 in the first round of the Class 3A playoffs.

Kickoff is scheduled for 7:30 p.m. on Friday night under the lights at Haywood Stadium.