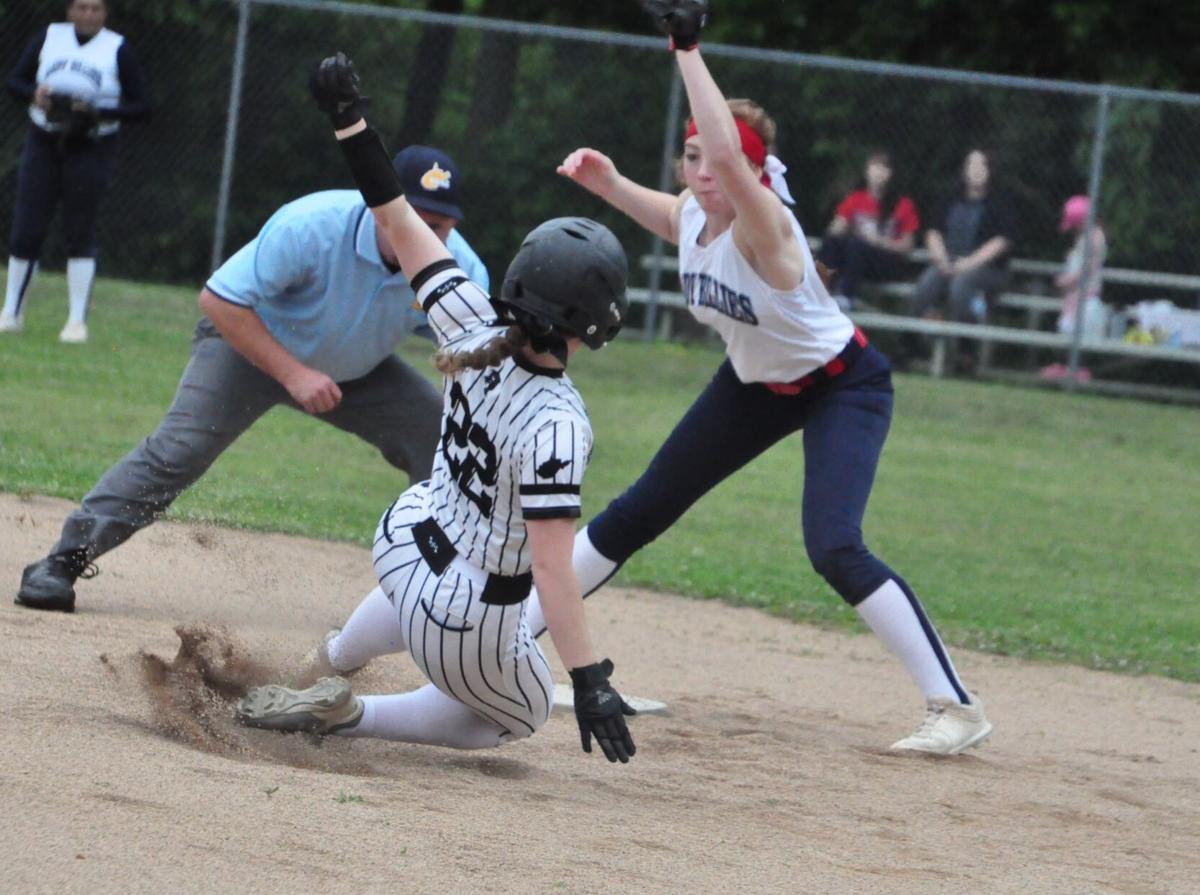 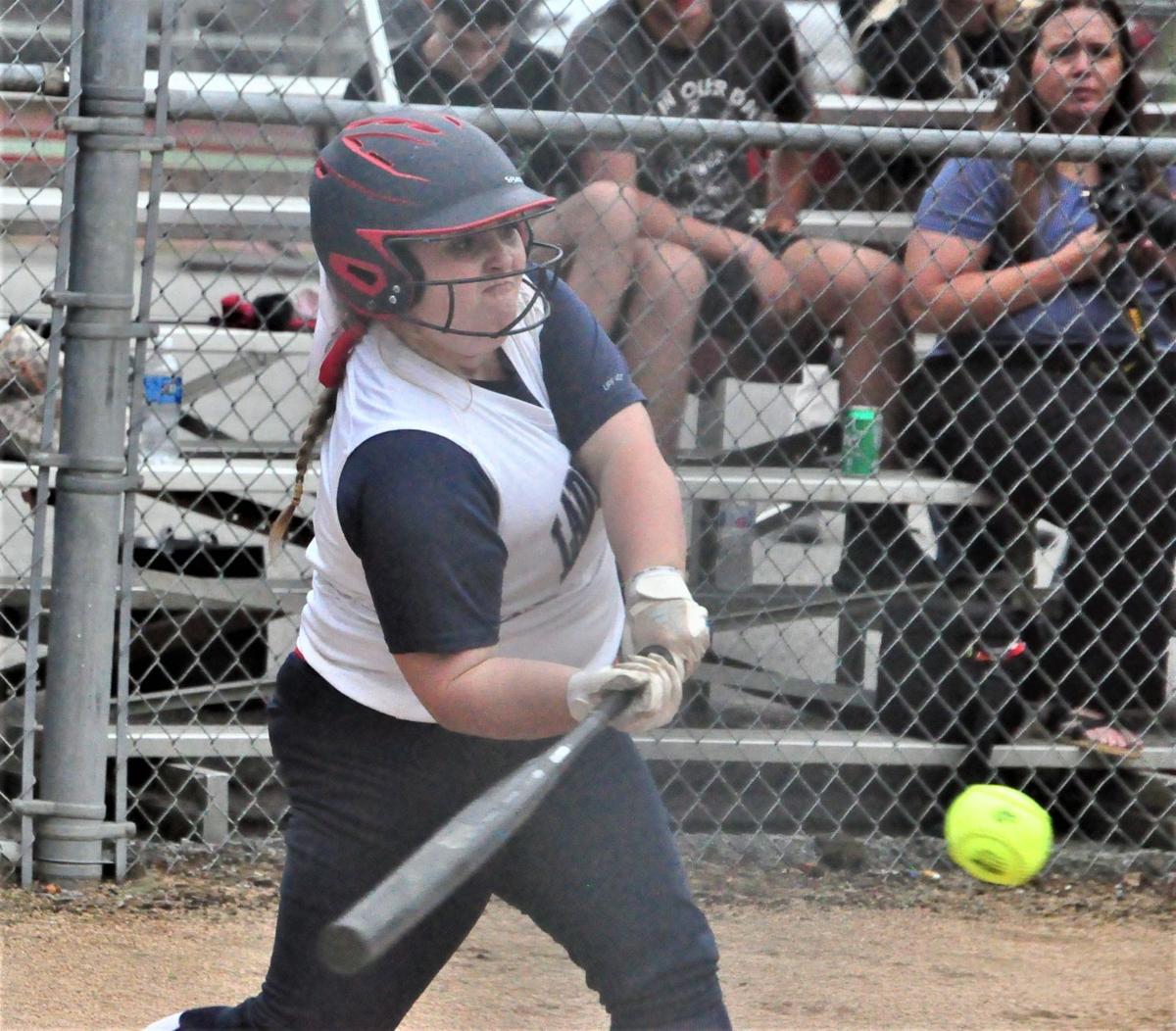 Man's Ashlee Tomblin puts the bat on the ball in the Lady Billies' win over Tug Valley in the sectional tourney. 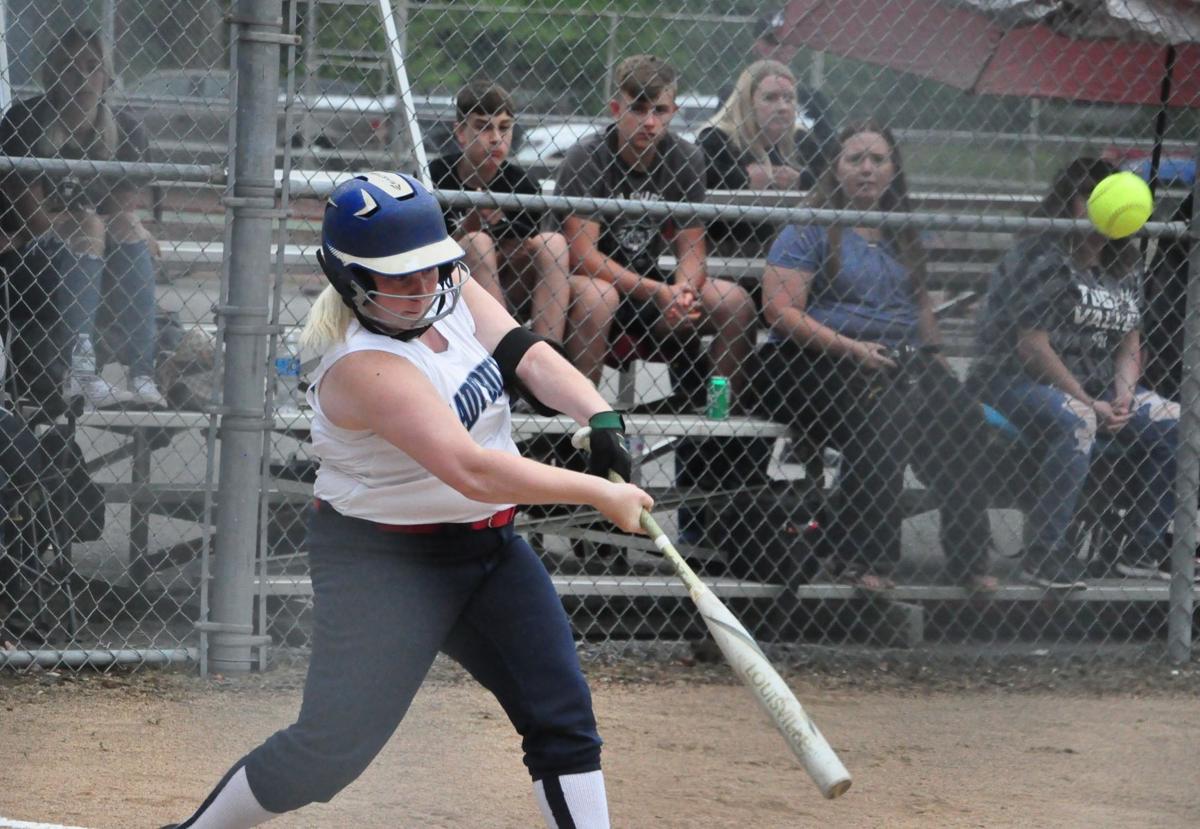 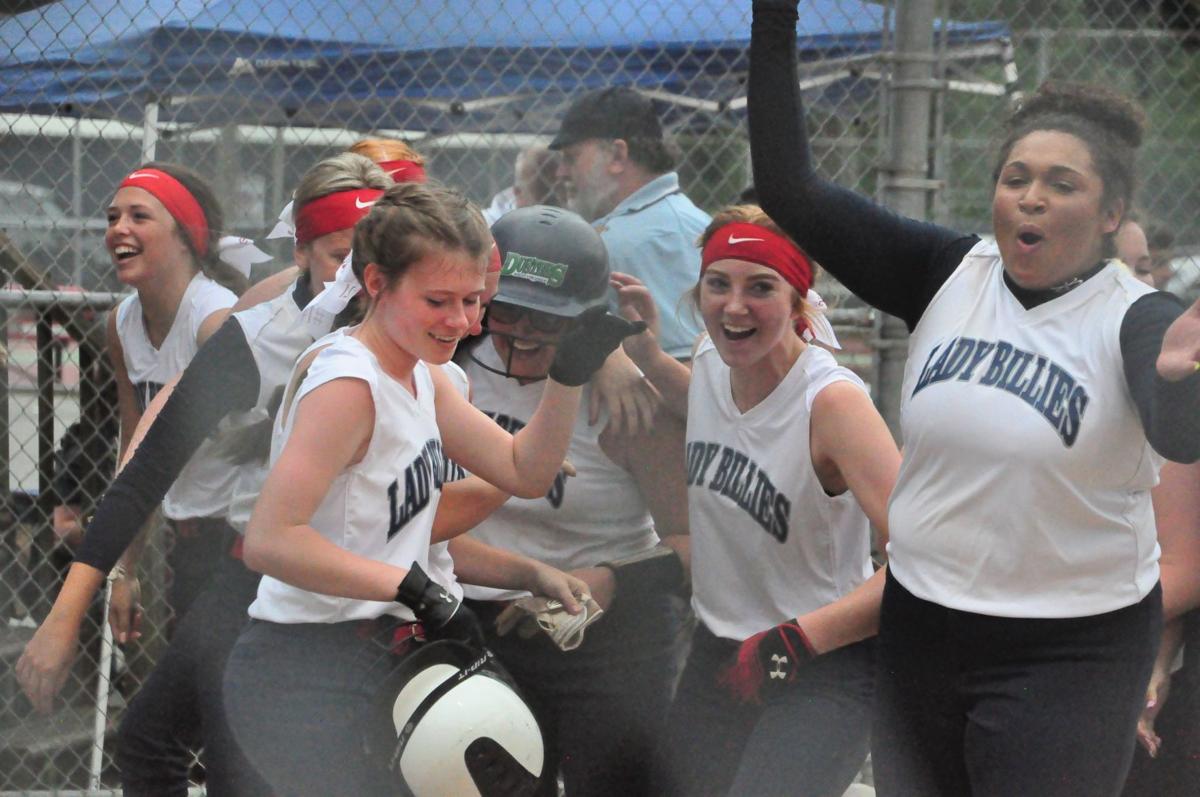 Man's Morgan Cooper is congratulated by teammates after hitting a home run in Wednesday's 2-0 win by the Lady Billies over Tug Valley in the sectional softball tourney at Man. 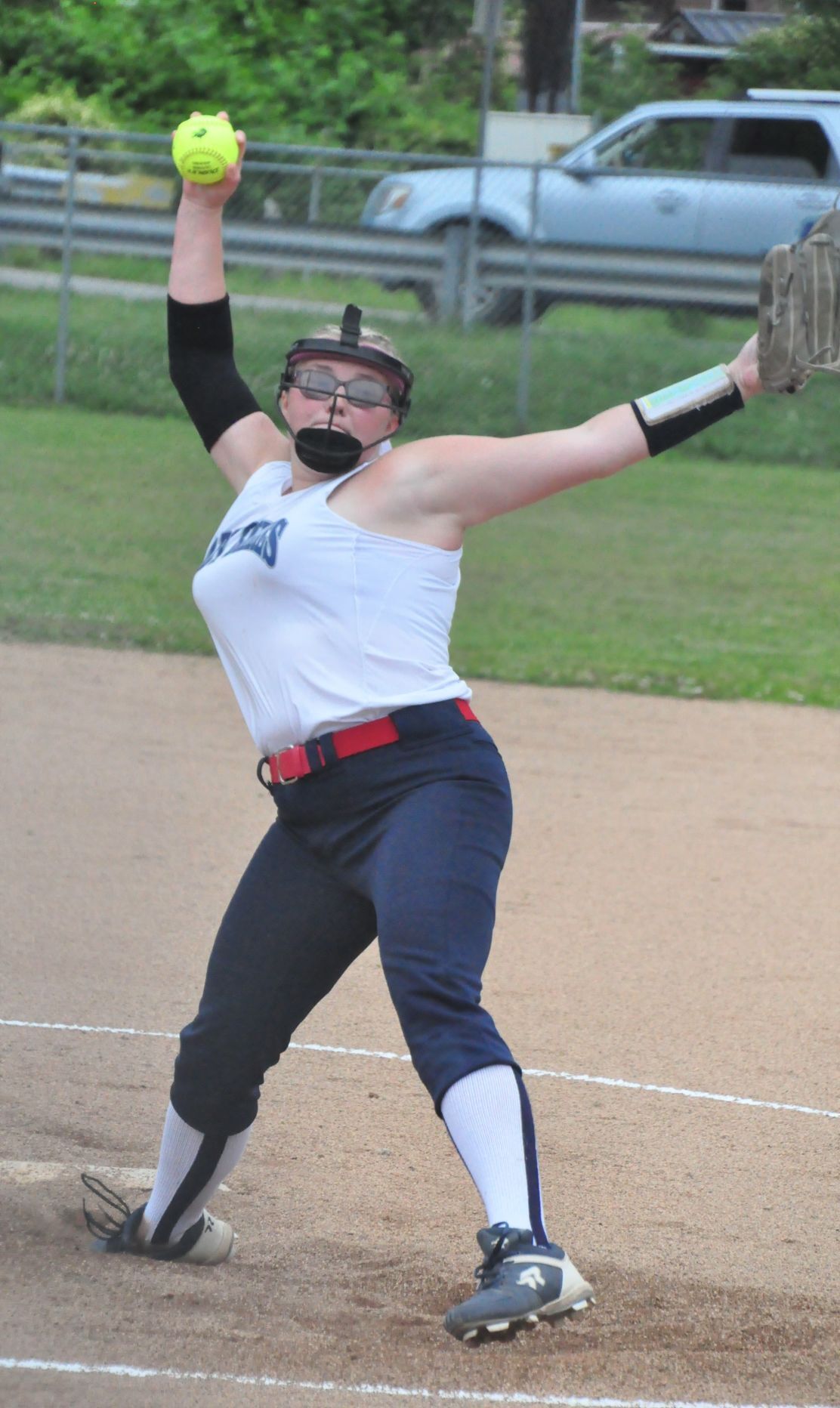 Man’s Morgan Cooper pitches in the Lady Billies’ 2-0 win over Tug Valley on Wednesday at Man.

Man's Ashlee Tomblin puts the bat on the ball in the Lady Billies' win over Tug Valley in the sectional tourney.

Man's Morgan Cooper is congratulated by teammates after hitting a home run in Wednesday's 2-0 win by the Lady Billies over Tug Valley in the sectional softball tourney at Man.

Man’s Morgan Cooper pitches in the Lady Billies’ 2-0 win over Tug Valley on Wednesday at Man.

MAN — As Morgan Cooper and Autumn Hall progressed into the late innings, mowing down batters, piling up the goose eggs and battling in an old fashioned pitcher’s duel, it became quite clear.

A single run or two would end up being the difference.

It certainly was as Cooper helped her own cause by hitting a late inning home run and pitching the Man High School softball team to a 2-0 shutout over Tug Valley in the Class A Region 4 Section 1 softball tournament on Wednesday, June 2 at Man.

Cooper’s solo homer in the bottom of the sixth inning broke a scoreless tie. Jaclyn Barnette added an RBI double in the sixth for Man.

Cooper went the distance for the Lady Billies, going seven innings and allowing no runs on five hits with 13 strikeouts, no walks and a hit batter. She got the Lady Panthers out in the top of the seventh to preserve the win, raising her record to 16-2 on the season. She has a 0.38 ERA, allowing just six earned runs and 36 hits while striking out 239 in 110 innings of work.

Autumn Hall took the tough luck loss for Tug Valley. She allowed two runs (one earned) on three hits with 10 strikeouts, no walks and two hit batsmen in a six-inning worksheet.

Man coach Randy Epperly was pleased to get the win and advance into the winner’s bracket of the double-elimination tourney.

“That was post-season play at its finest right there,” Epperly said. “It was nothing to nothing and one team breaks through. With us getting that second run in that last inning that was big because they had a runner on in the seventh. That takes away the bunts. Tug Valley is a good team. If we face them again it will be the same kind of game. We used to have a lot of these 1-0 kind of games just over 10 years ago when we had Marlena (Frye). We had a 1-0 game just like this against Buffalo.”

The left-handed hitting Cooper got Man on the board in the bottom of the sixth as she crushed a Hall pitch well beyond the right field fence and past the road for a solo homer.

It was a bomb, Epperly said.

“That was a blast. That was a no-doubter,” he said.

Cooper, a sophomore and first-year varsity player, is Man’s leading hitter with a .520 average this year. She has five home runs and 16 RBIs with six doubles.

After the blast, Carlee Muncy and Ashlee Tomblin each reached base safely on Tug Valley errors. Barnette’s RBI double to center then gave the Lady Billies the insurance run they were looking for.

Tug Valley threatened in the seventh with Haleigh Muncy’s two-out double. She took third on a wild pitch but was stranded there as Cooper caught Kianna Justice looking to end the game.

Man improved to 2-1 this season against Tug Valley.

The Lady Panthers handed Man one of its two losses this season in a 3-1 victory at Naugatuck. Man won 6-2 in the other meeting during the season at home.

“I expected it to be a close game,” Tug Valley coach Rocky Hall said. “We were hoping that we could have put some runs up on the board but it didn’t work out for us. I made a bad pitch call on the homer. It was a good ballgame. We have a chance to come back in the this tournament. We have some players and we have the pitching to come back through. Hopefully we can do that and turn the tide.”

The Lady Billies had their chances in the bottom of the first inning as Cooper and McKinley Cline led off the game by getting hit by pitches, putting two on and no out.

Man, however, could not get down the bunt and Hall got out of the jam.

“We’ve got to work on our bunting some,” Epperly said. “But we’ll be fine. I would have liked to have gotten a bunt down early and scored early in a game like this. Our girls hung in there. This is a good group and they want each other to do well. We have no hard feelings at all about what goes on in the dugout. They pull for each other. This is one of my better teams as far as cohesiveness goes.”

Hall retired 12 straight batters in the middle innings before an infield single by Kierston Ellis in the fifth.