Sign Up
Log In
Purchase a Subscription
You are the owner of this article.
Edit Article Add New Article
You have permission to edit this article.
Edit
Welcome, Guest
Home
News
Sports
Features
Photos
Opinion
Obituaries
Classifieds
Legals
e-Edition
1 of 7 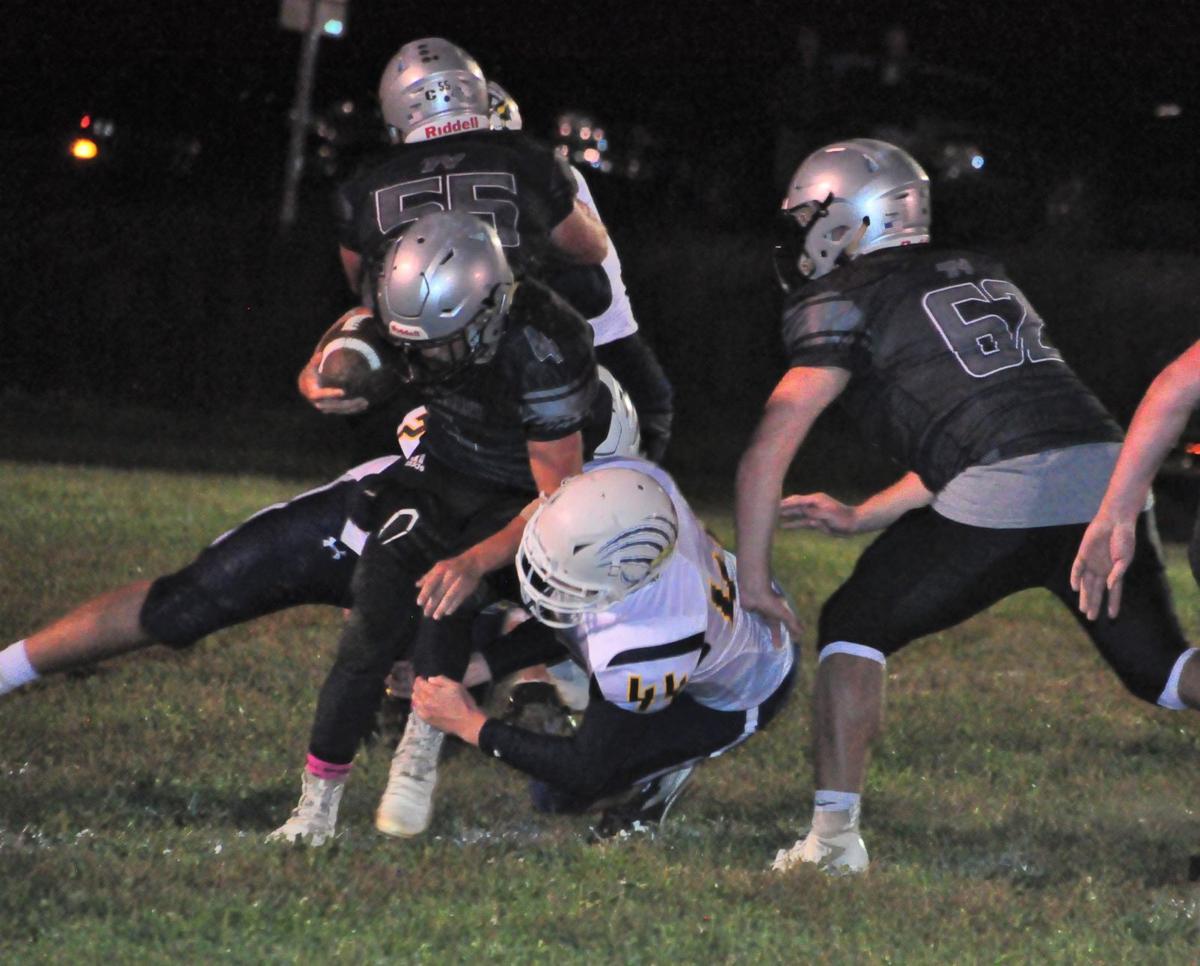 Tug Valley’s Tanner Kirk is tackled in the Panthers’ 22-12 win over Logan on Friday night at Naugatuck. 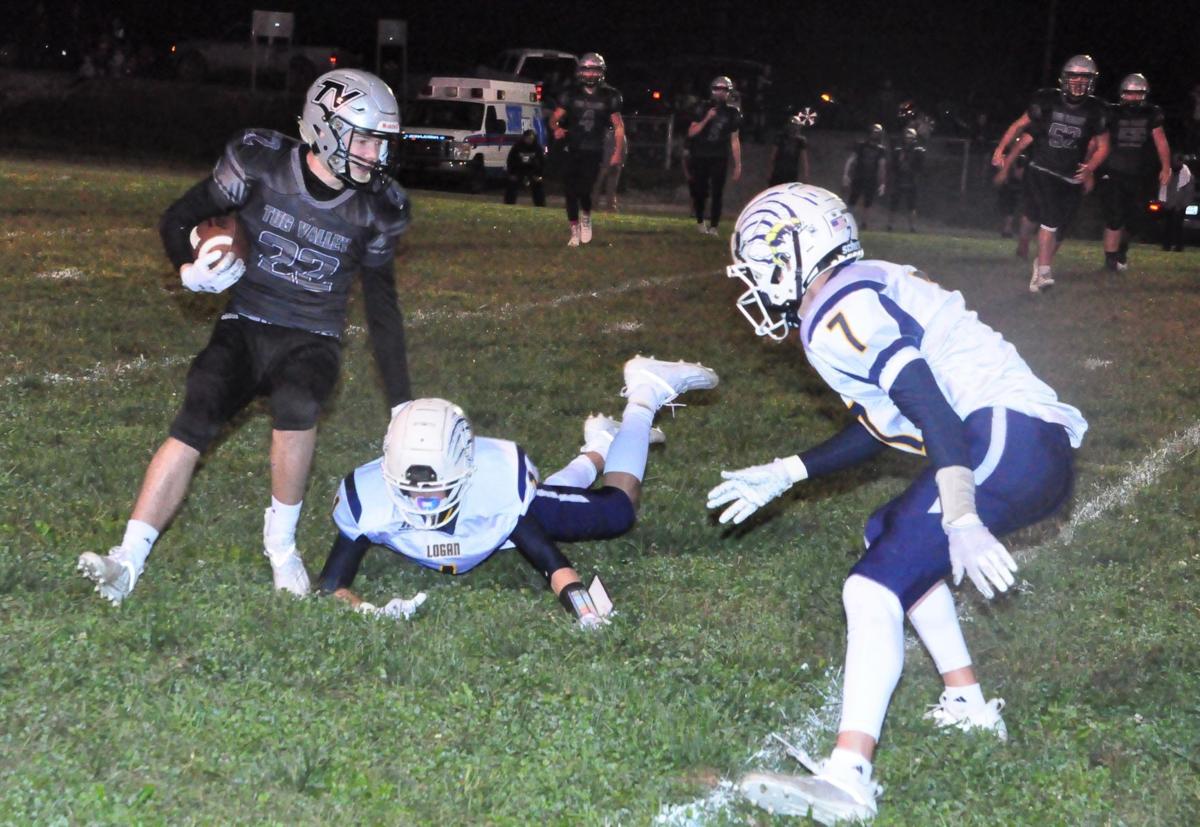 Paul Adkins | The Logan Banner Tug Valley’s Caleb May (22) looks for room to run after making a catch in Friday’s win over Logan at Naugatuck. 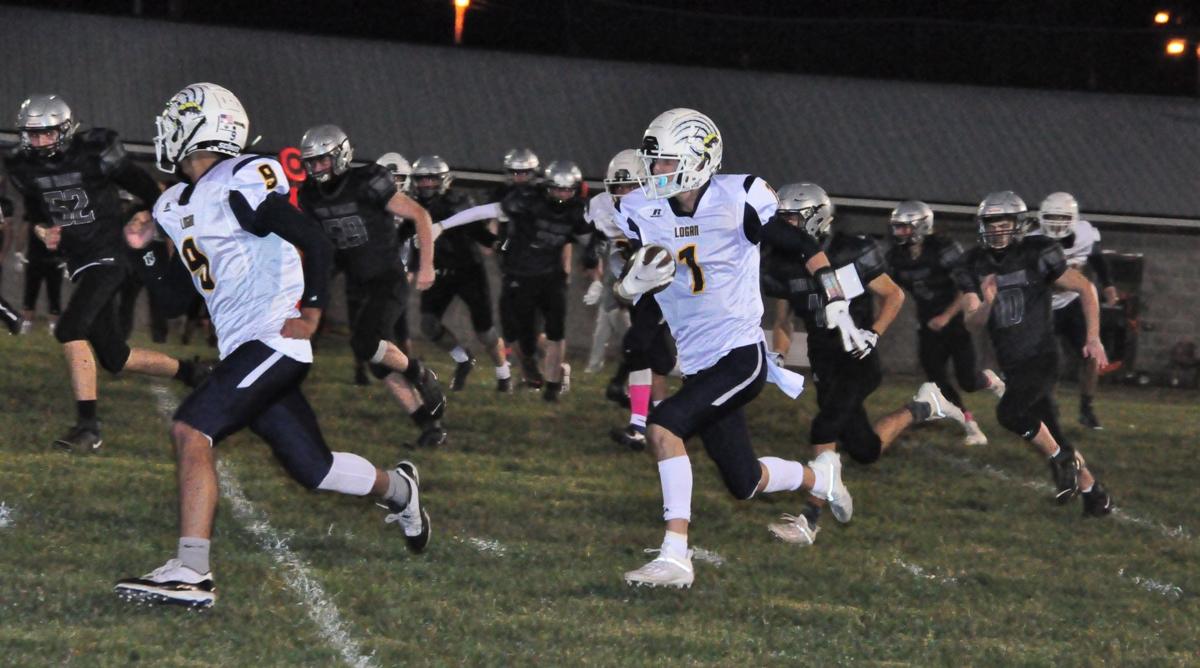 Logan High School’s Aiden Slack (1) returns the opening kickoff for a touchdown in the Wildcats’ 22-12 loss at Tug Valley on Friday. 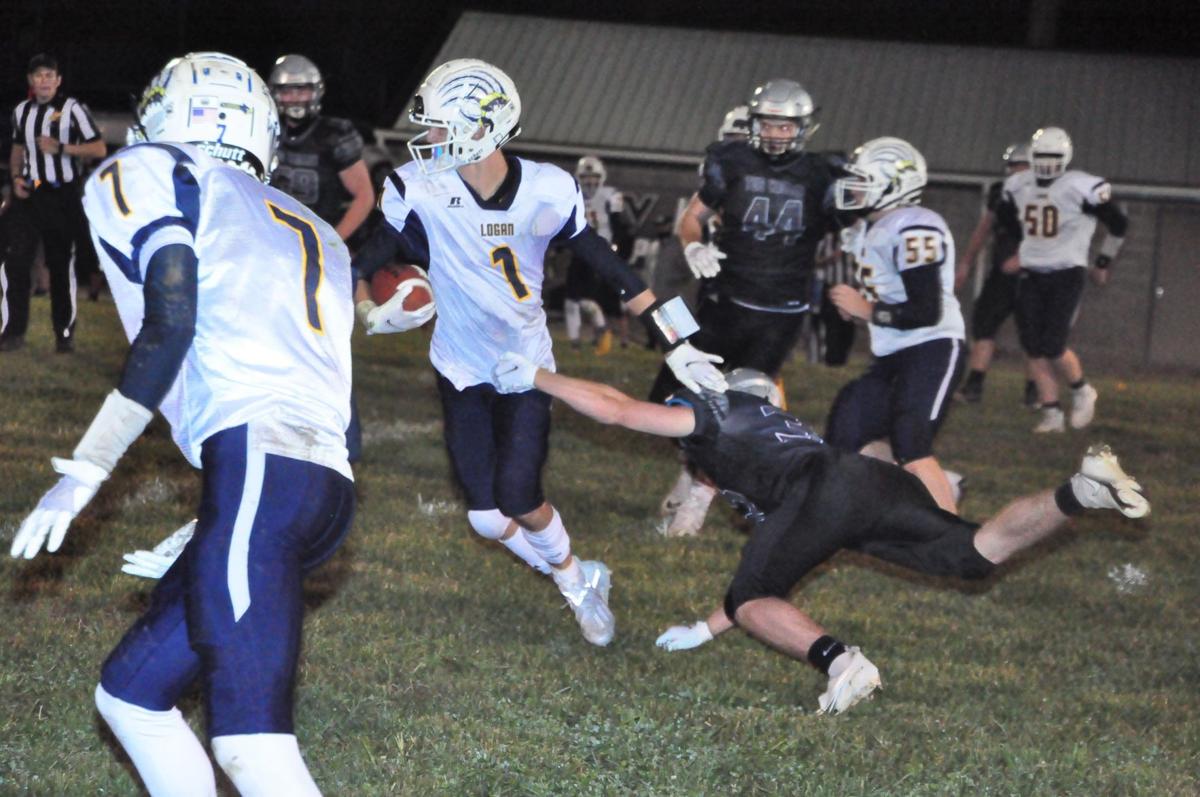 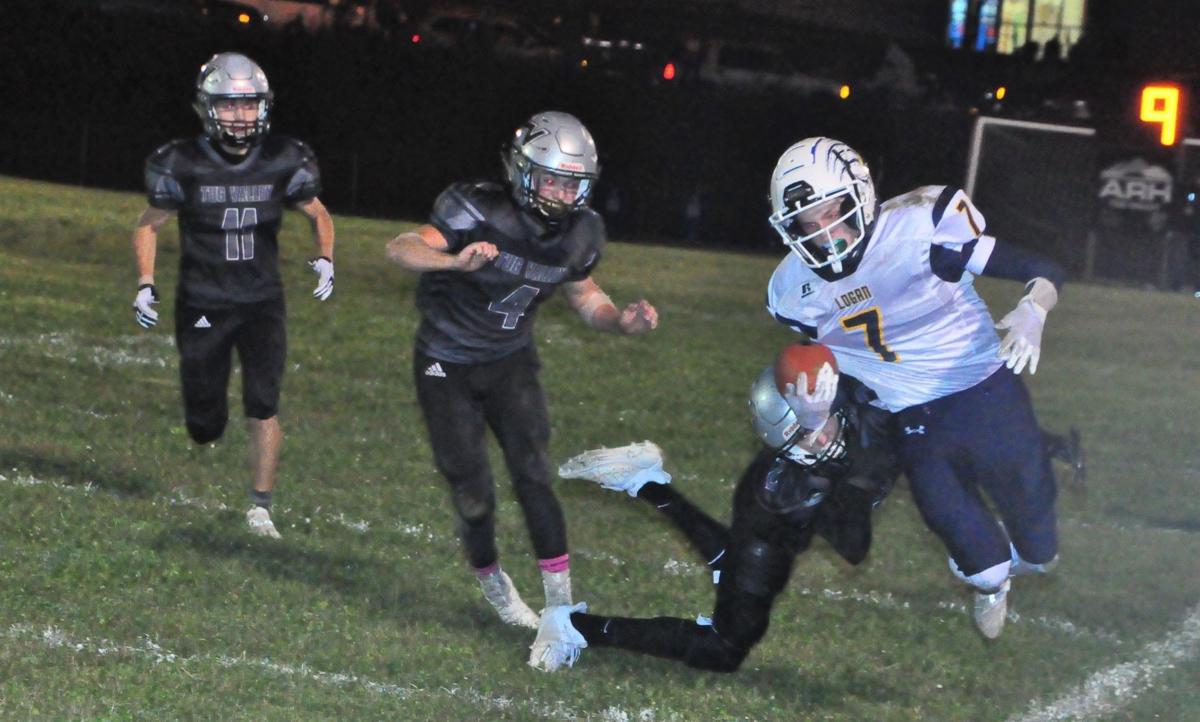 Paul Adkins | The Logan Banner Logan High School’s Carson Kirk (7) runs with the ball along the sideline in the Wildcats’ 22-12 loss at Tug Valley on Friday, Oct. 2, 2020. 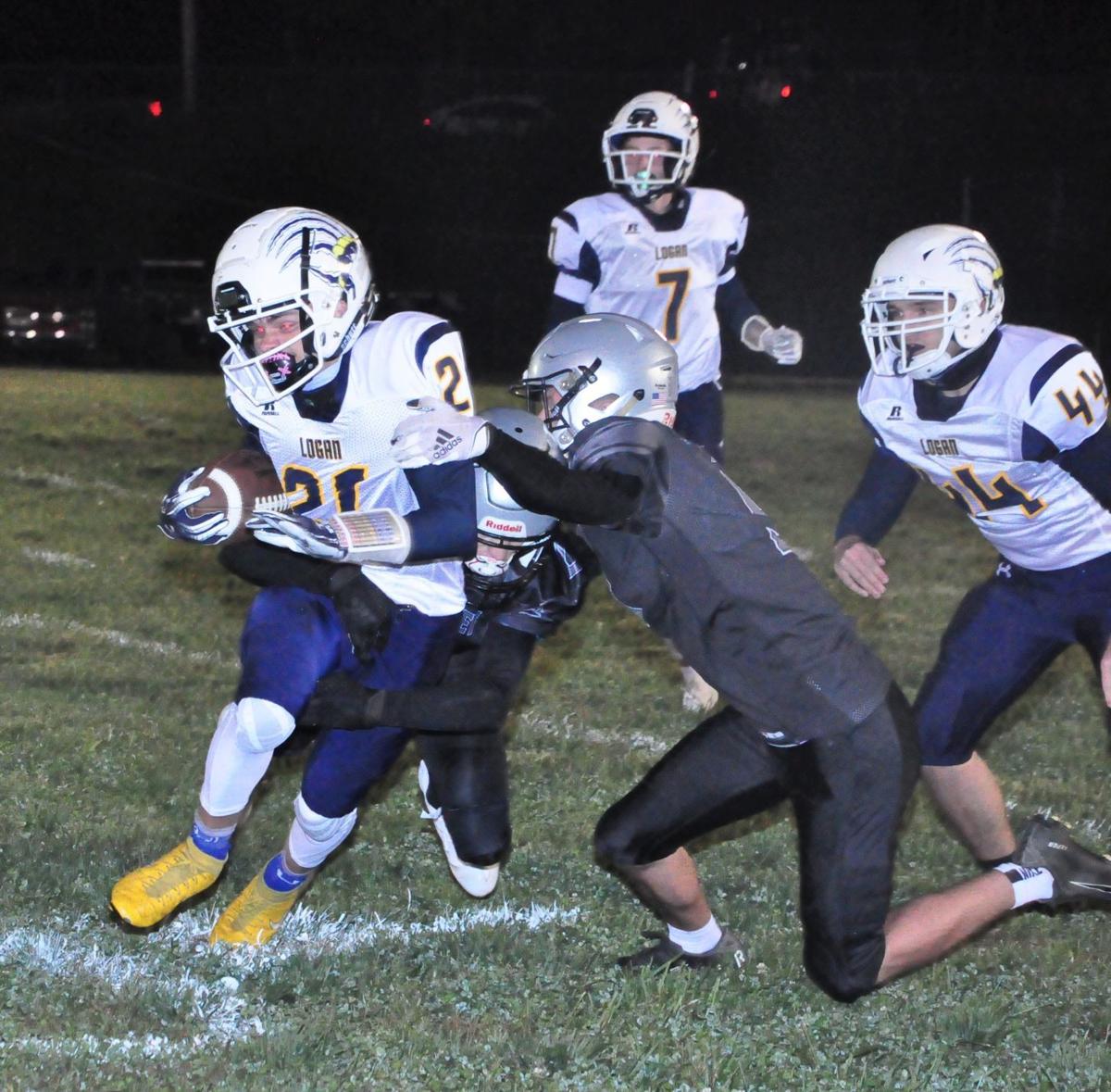 Logan High School’s Corey Townsend is tackled in the Wildcats’ 22-12 loss at Tug Valley on Friday. 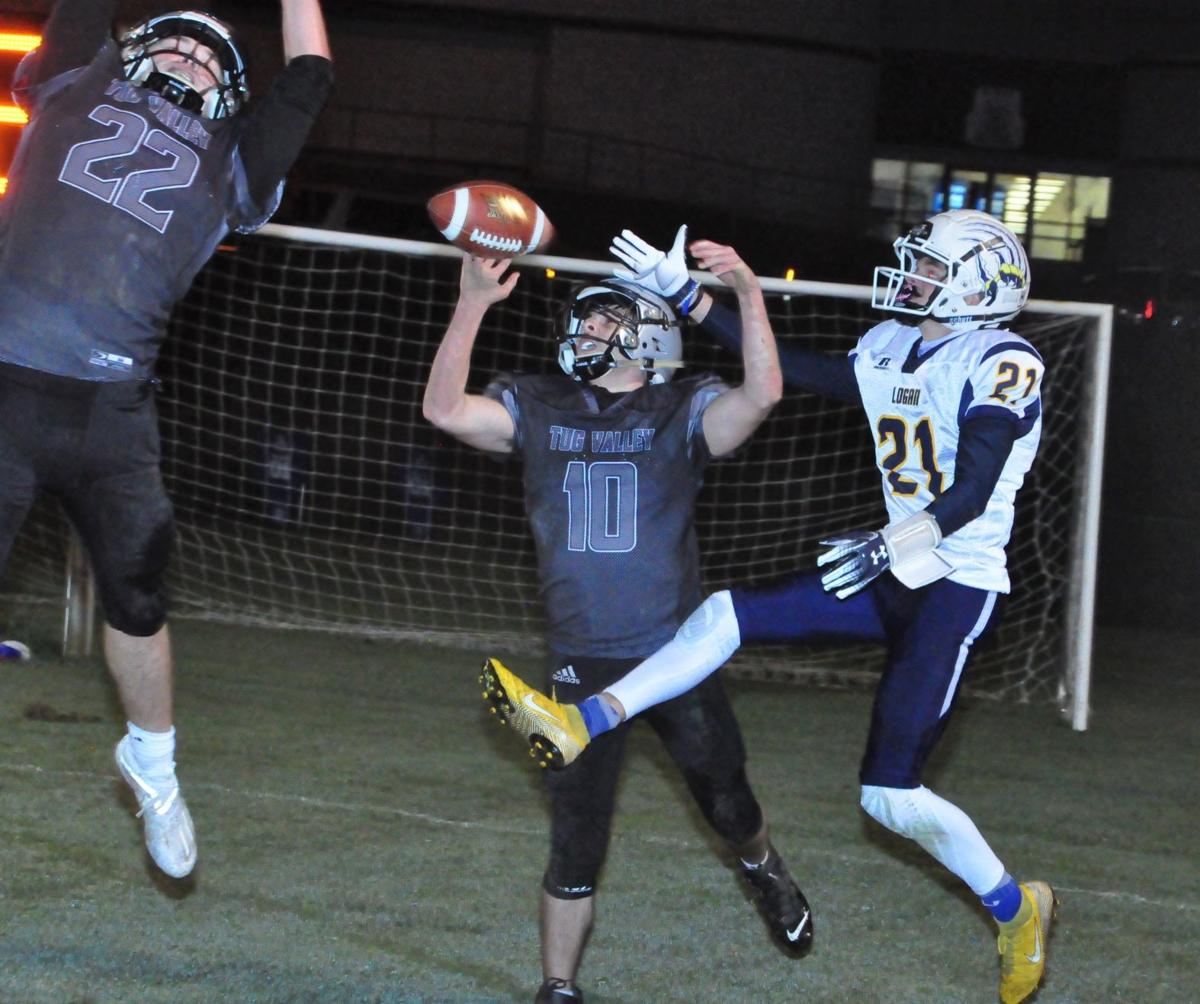 Tug Valley’s Tanner Kirk is tackled in the Panthers’ 22-12 win over Logan on Friday night at Naugatuck.

Paul Adkins | The Logan Banner Tug Valley’s Caleb May (22) looks for room to run after making a catch in Friday’s win over Logan at Naugatuck.

Logan High School’s Aiden Slack (1) returns the opening kickoff for a touchdown in the Wildcats’ 22-12 loss at Tug Valley on Friday.

Paul Adkins | The Logan Banner Logan High School’s Carson Kirk (7) runs with the ball along the sideline in the Wildcats’ 22-12 loss at Tug Valley on Friday, Oct. 2, 2020.

Logan High School’s Corey Townsend is tackled in the Wildcats’ 22-12 loss at Tug Valley on Friday.

The Class A No. 3-ranked Panthers continued its success vs. Logan County teams with Friday night’s come-from-behind 22-12 victory over the Double-A Wildcats at Tug Valley’s Bob Brewer Stadium in Naugatuck.

Friday night’s matchup was the first-ever meeting between the Panthers and the Wildcats in football. The two had scrimmaged each other during the preseason many times in the past but have never played during the regular season.

Logan and Tug Valley were not originally scheduled to play each other this season but in the scheduling chaos which is the 2020 season caused by the ongoing COVID-19 pandemic and the state’s color-coded maps, the two lined up on Friday.

Coincidentally, Tug Valley and Logan are scheduled to have a rematch on Oct. 16 at Logan.

The Panthers improved to 2-0 on the season with the win. It was Tug Valley’s first action since a 22-20 win at Sherman on Sept. 11. Logan (0-2) was coming off last Saturday’s 20-6 loss at Chapmanville in its delayed season opener.

Tug Valley coach Hady Ford said it was a good win for his team.

“Absolutely. It’s a good win over a Double-A team,” Ford said. “It should put us pretty high in the rankings. We could be number two or one. But we have to start playing like a number one or number two team. We just didn’t do that tonight.”

The Panthers had trouble moving the ball ball against Logan’s defense but found some rhythm in the second half.

Down 12-8 after three quarters, the Panthers made their move.

Tug Valley scored the go-ahead and eventual game-winning touchdown with 11:21 left in the game as quarterback Joby Sorrell connected with Ethan Colegrove on a 28-yard touchdown pass. The two-point conversion failed but the Panthers led 14-12.

The touchdown was set up by a 21-yard run by Tanner Kirk.

Logan quarterback Jordan Hayes drove the Wildcats to the Tug Valley 30-yard line on the next possession but was intercepted by Caleb May at the 15. It was one of three picks by the All-State May on the night. May also had a blocked punt.

Three snaps later, the Panthers were in the end zone again with a 26-yard TD pass from Sorrell to May with 4:45 left in the game. The two hooked up on the two-point conversion and Tug Valley led 22-12.

The first play of the drive was a big one as Jarrett Barker ran for 36 yards into Logan territory to the 29-yard line.

On Logan’s next drive, Hayes was again intercepted by May.

Tug Valley was then able to run down the clock to just 26 seconds left in the game before punting.

Logan got the ball back and took a knee to end the game.

Logan’s Aiden Slack took the game’s opening kickoff and dashed in for a 75-yard touchdown as the Wildcats led 6-0 with 11:47 to go in the first quarter.

The Wildcats then scored again on the third play of its opening drive as Hayes raced in on a 37-yard keeper with 9:20 to go. The two-point conversion failed but Logan led 12-0.

It would be the only points of the night for the Wildcats.

The game was not pretty and lasted nearly three and a half hours.

Numerous penalties mounted on both sides slowing down the game to a crawl at times.

“That’s been our signature so far. It’s not a good signature,” Ford said. “These guys showed what kind of team that they can be. We came out and played well in the second half but we have to cut down on the mental mistakes. We are killing ourselves play after play and penalty after penalty, blocking the wrong people and jumping off sides. But once we get those things lined out we can be a pretty good ball team.”

It was only the second game of the season for both teams.

“We had set up our schedule originally to play some not as tough teams at the beginning to get into a rhythm and do away with some of these mistakes,” Ford said. “But without having those games it’s Game 3. We would have normally been in Game 6 and then. Game 8 counting the scrimmages. Instead of 8 games its 3 games and you see that. You see the mistakes. You see the penalties, the bad throws and the bad routes. So it’s definitely affected the season.”

The Wildcats looked to add to that in the second quarter.

Logan drove to the Tug Valley 12 but holding penalty pushed Logan back to the 25.

Then on the next play, Hayes found Slack in the end zone on a 25-yard TD pass. The score, however, was nullified after a holding penalty by Logan. It was the first of two touchdowns which were called back due to penalties.

The drive stalled and Logan was forced to punt which resulted in a touch back.

Logan had to punt again on its next drive and Barker was able to come up with a big special teams play with a 58-yard punt return to the Wildcat 2-yard line.

On the next snap, Kirk bulled in from 2 yards out to put Tug Valley on the board. Sorrell connected with Ian Reed on the two-point conversion play and the Panthers trailed 12-8 with 4:24 left until halftime.

May later blocked a punt from Slack, giving the Panthers the ball at the 16-yard line. Tug Valley, however, fumbled the ball away with 2:26 left until the half as Cameron Hensley recovered.

Three plays later, Hayes found Hensley on a 68-yard TD bomb but the score was nullified after a holding penalty on the Wildcats.

Ford said his Panthers were able to get the ground game going in the second half and that’s what made the difference.

“We told the guys that the only way the pass was going to open up for us was for us to run the ball,” Ford said. “We started to be able to run the ball a little bit there in the second half. That’s what opened up the pass. That’s what we have to do. That’s our offense.”

Makiah Adams added an interception for Logan. Hensley and Brice Davis each had a fumble recoveries.

Hayes was 20 of 31 passing for 145 yards on the night but was sacked six times. Hayes was also Logan’s leading rusher with 17 carries for 117 yards. Slack was 1 of 3 passing for 14 yards and one pick. The completion was on a fake punt play.

Sorrell was 7 of 21 passing for 92 yards and the two touchdowns.

Kirk led the ground game with 16 rushes for 111 yards and a TD. May had three catches for 36 yards. Reed had two grabs for 20 yards. Kirk had one catch for eight yards. Colegrove had the 28-yard TD grab.

Dawson Loving led the Tug Valley defense with 10 total tackles. He also had two QB sacks. Buddy Marcum also had a pair of sacks. Barker and May each had eight total tackles.

Tug Valley is scheduled to host James Monroe on Tuesday night at 7:30 p.m. then play a second game this week on Friday, Oct. 9 in a home game against Trinity Christian.

The contests will be the first game for Tug Valley against either school.

Then on Oct. 16, the Panthers play at Logan in the rematch.

Their last four scheduled games are on the road including the Logan game. The Panthers also travel to Richwood, Man and Wirt County.

“Those last two are going to be a battle,” Ford said. “We will have to come ready to play.”

Logan was scheduled to play at Scott next Friday night but that game was called off due to Boone County going orange on the state’s COVID-19 color-coded map.

Logan is now scheduled to host Westside on Friday at 7:30 p.m. in a substitution game.