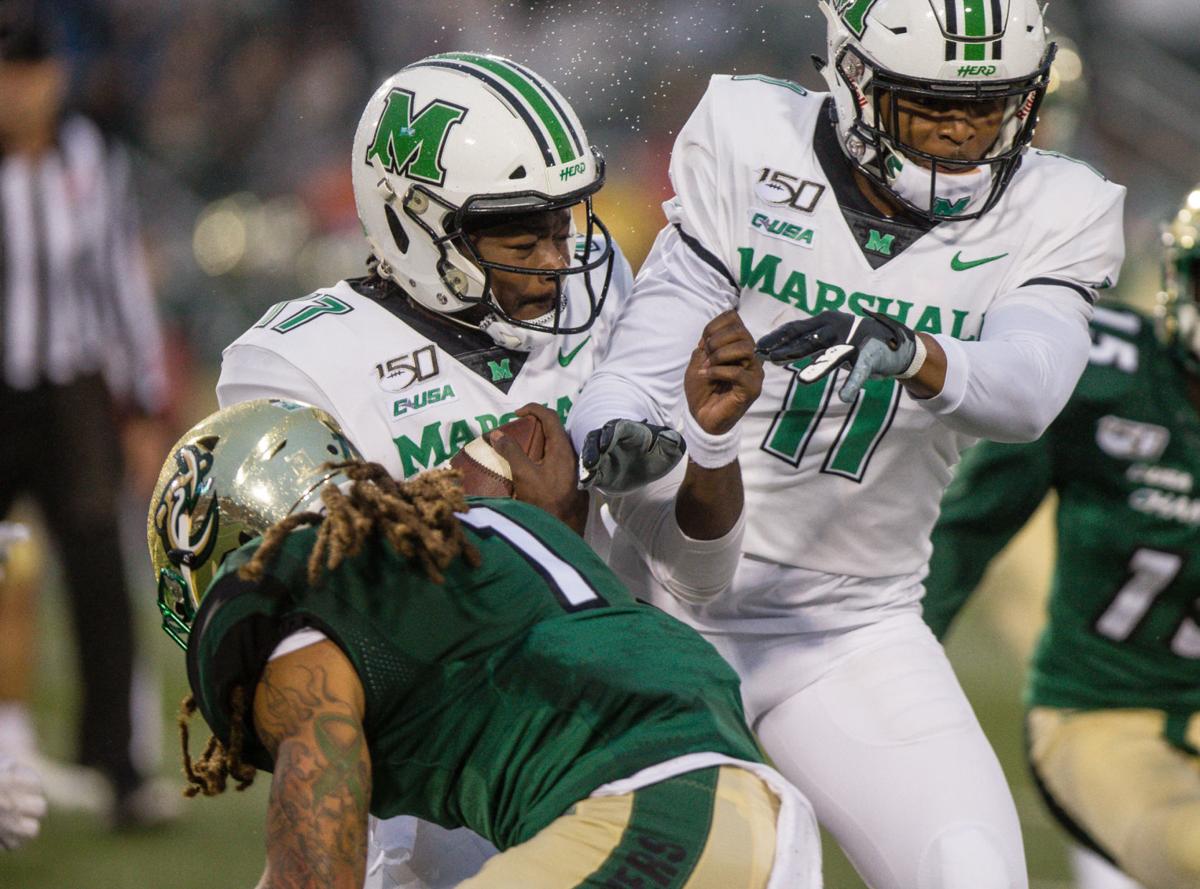 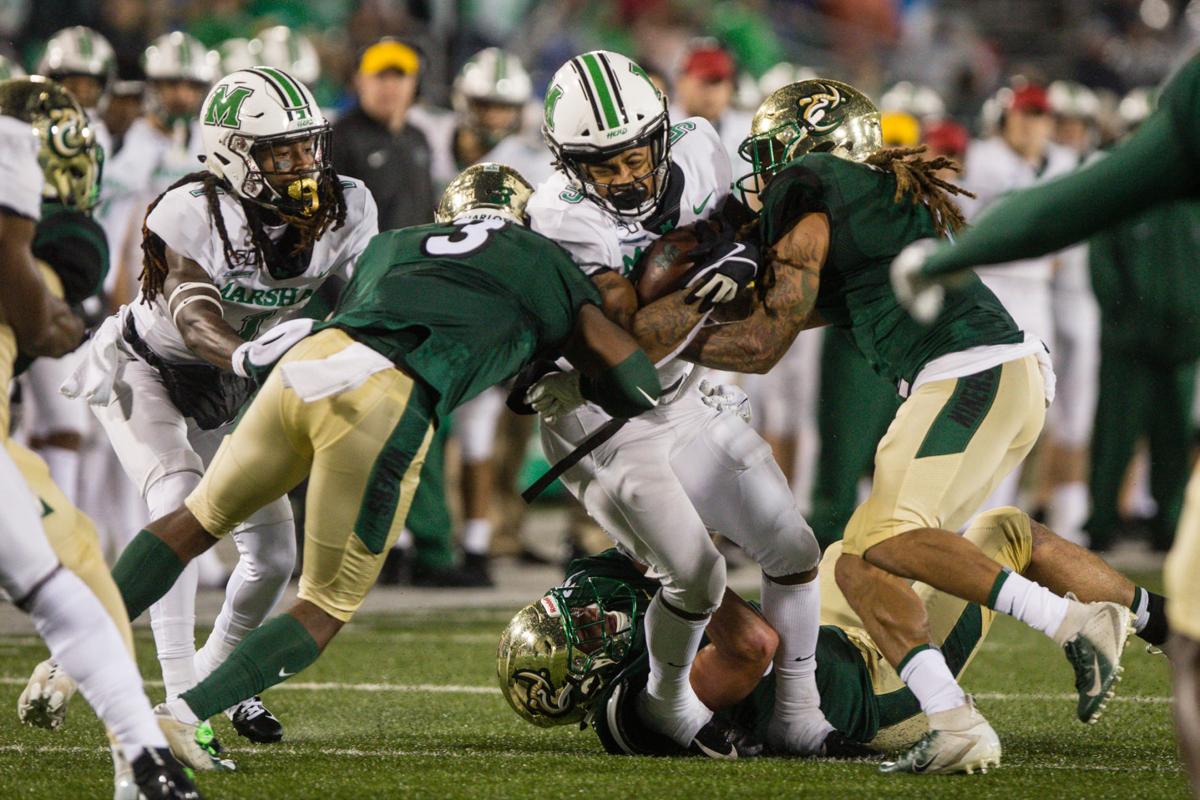 Marshall running back Sheldon Evans, center, is hit by several Charlotte defenders after making a catch during a C-USA football game Saturday at Jerry Richardson Stadium in Charlotte, N.C. The Herd lost control of its own destiny in the C-USA East Division race with last week’s loss to Charlotte, but their chances of hosting the league championship has increased after a change in the divisional tiebreaker format.

Marshall running back Sheldon Evans, center, is hit by several Charlotte defenders after making a catch during a C-USA football game Saturday at Jerry Richardson Stadium in Charlotte, N.C. The Herd lost control of its own destiny in the C-USA East Division race with last week’s loss to Charlotte, but their chances of hosting the league championship has increased after a change in the divisional tiebreaker format.

Tucker scored a pair of fourth-quarter touchdowns — the final coming on fourth-and-9 late — to seal a 24-13 win for Charlotte over the Thundering Herd in college football on a soggy Saturday at Jerry Richardson Stadium.

“Give Charlotte credit. They did a hell of a job,” Marshall head coach Doc Holliday said. “We did not play well offensively at all. We turned the ball over three times and just could not get it going offensively and they did.”

Tucker’s five-yard scoring run with 10:47 remaining gave Charlotte a lead it did not relinquish before he capped the scoring in single coverage against Marshall’s Chris Jackson with under a minute remaining.

The game was played in a steady downpour throughout the game that may have washed away Marshall’s chances of a Conference USA East Division title. The elements might have been tough, but Holliday did not use that as an excuse following the loss, saying it came down to execution.

“They played in the same elements we did and they did a better job than we did, that’s for sure,” Holliday said.

Following Saturday’s loss, Marshall (7-4, 5-2 C-USA) needs a Florida Atlantic loss to Southern Miss, and to beat FIU next week to have a shot at the East Division crown.

“It’s difficult because we put in a lot of work to accomplish that goal and to … take a step backward toward that goal is not a good feeling,” Marshall quarterback Isaiah Green said. “We’ll be fine, though. Everybody will keep their head up and focus on winning next week — controlling what we can control.”

The Herd was simply beaten at its own game as Charlotte’s defense stymied the offense and Marshall could not stop the 49ers’ offense, led by Tucker, quarterback Chris Reynolds and running back Benny LeMay.

Reynolds finished with 166 yards through the air and 145 rushing while LeMay — who passed 3,000 for his career in the win — also rushed for 100 yards.

While Charlotte was able to get its main receiving target involved in Tucker, Marshall was unable to get any receiver going. The Herd did not complete a pass to a wide receiver until there were 50 seconds remaining in the game.

“We had some trouble with the rain — had a couple drops, some bad throws,” Green said. “We just left too many plays out there for us to win the game.”

Perhaps the biggest play was a dropped opportunity for the Herd near Charlotte’s goal line that would have restored momentum for the Herd.

After Charlotte used a Jonathan Cruz field goal to tie the game at 10 on the opening possession of the second half, Marshall drove deep into Charlotte territory. Tight end Devin Miller, however, dropped a would-be touchdown after Green kept a play alive and the Herd had to settle for a 31-yard field goal by Justin Rohrwasser.

With plays in the passing game limited on Saturday, the drop was magnified. Marshall took a 13-10 lead, but the momentum was with the 49ers after the missed opportunity for the Herd.

“Going into score down there in the score zone, we had the one drop that was a big play,” Holliday said. “We have to overcome that, and we weren’t able to do that.”

Marshall went into the locker room with a 10-7 lead, but had to survive a missed 39-yard field goal by Charlotte’s Jonathan Cruz before the break to do so. Prior to that, the 49ers had built its momentum late offensively behind the play of Reynolds and Tucker. Tucker had 84 yards receiving in the first half and drew a key pass interference penalty on third down which prolonged a touchdown drive, capped by Reynolds’ 16-yard scoring run, that got the 49ers in rhythm.

The Herd jumped to a 10-0 lead early in the second quarter with the special teams accounting for all of Marshall’s first-half points.

With the rain coming down, Marshall’s Darius Hodge snuck through the Charlotte protection and blocked a punt from Connor Bowler that Joe Early returned for a touchdown.

Rohrwasser then hit the first of two 31-yard field goals he had to produce the two-score cushion.

Marshall running back Brenden Knox finished with 92 yards rushing in the loss. Defensively, Tavante Beckett added 15 tackles, a forced fumble and fumble recovery for the Herd.

Marshall takes on Charlotte during a C-USA football game on Saturday, Nov. 23, 2019, at Jerry Richardson Stadium in Charlotte, N.C.