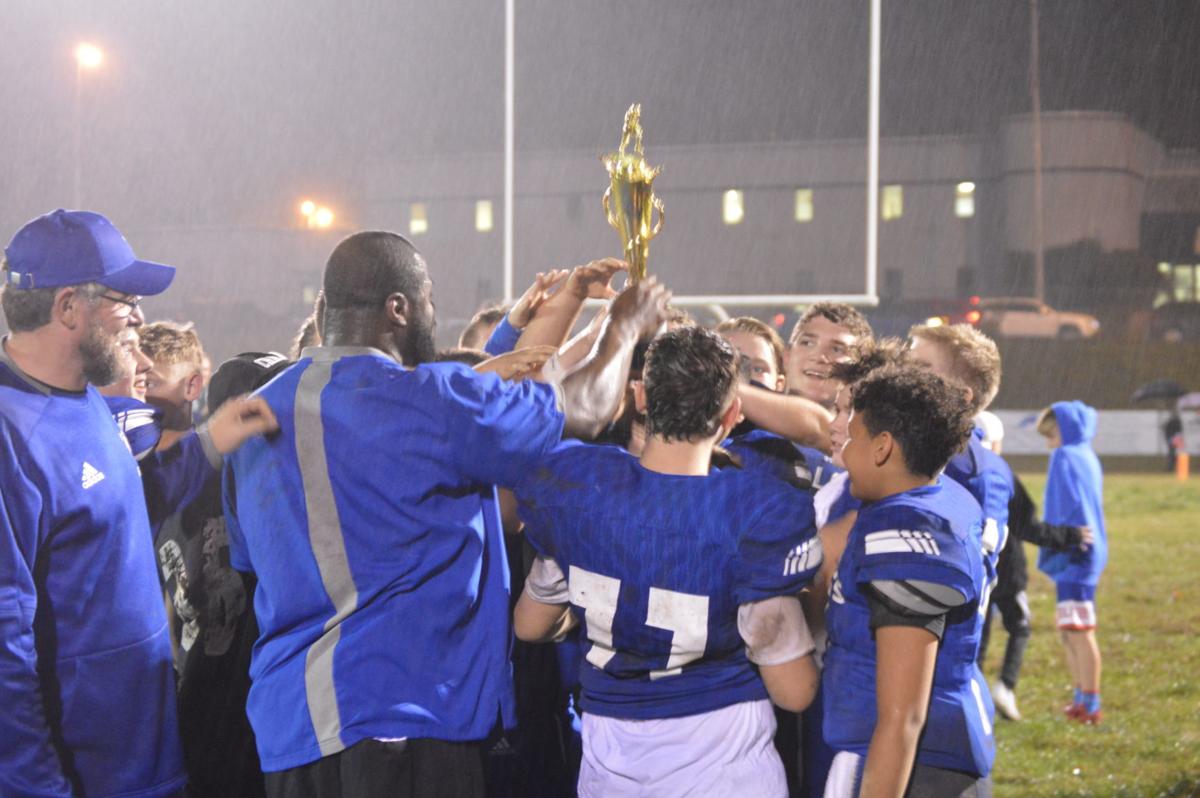 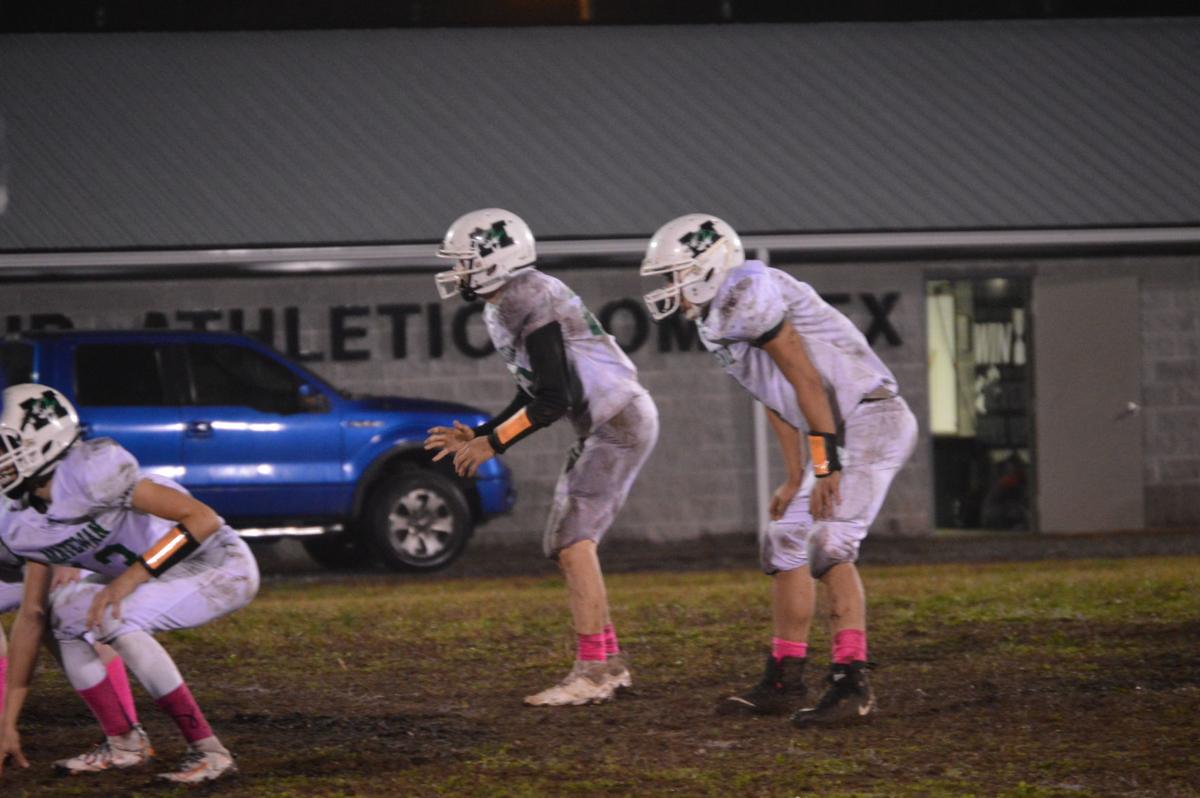 Matewan quarterback Deuce Prater (left) and fullback Jesse Smith wait for the ball to be snapped during the Tigers’ 28-6 loss in the Mingo County Championship game on Wednesday at Bob Brewer Stadium. 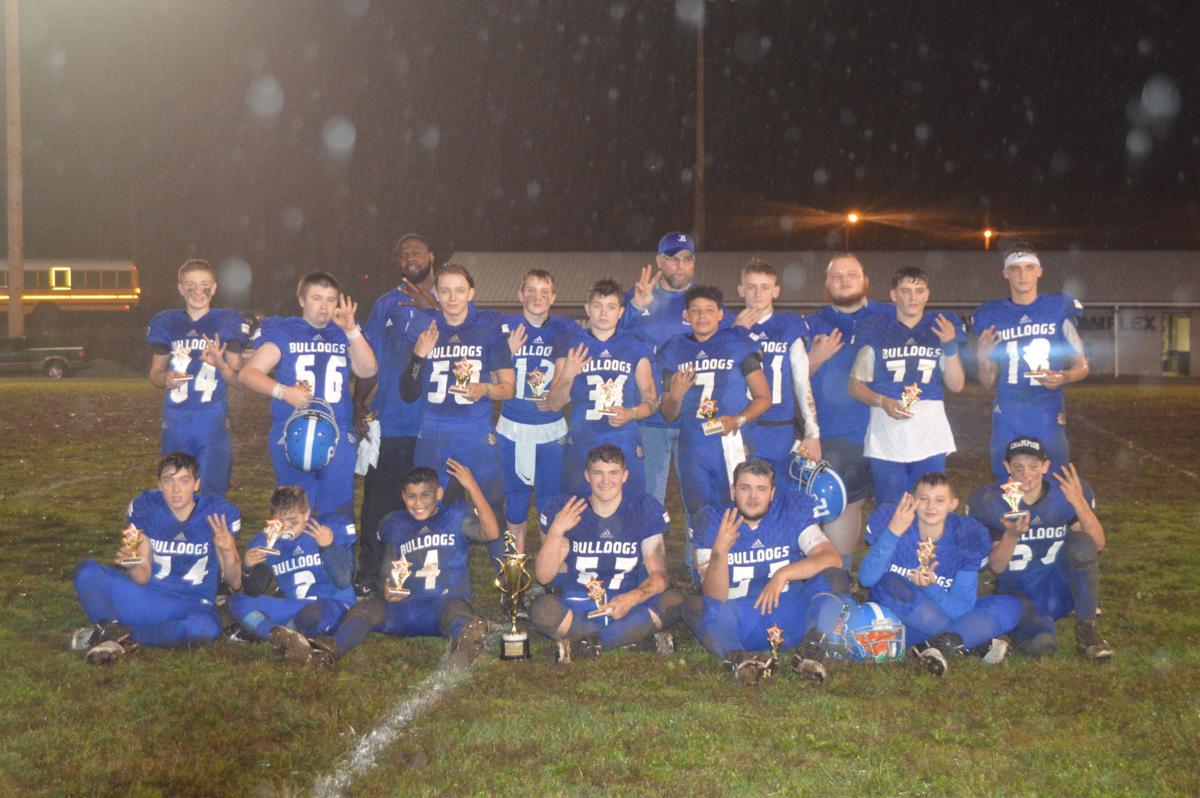 Matewan quarterback Deuce Prater (left) and fullback Jesse Smith wait for the ball to be snapped during the Tigers’ 28-6 loss in the Mingo County Championship game on Wednesday at Bob Brewer Stadium.

NAUGATUCK — The Burch Bulldogs claimed their third consecutive Mingo County Middle School football championship on Wednesday, Oct. 30, at Bob Brewer Stadium as they cruised to a 28-6 win over the Matewan Tigers.

Burch received the ball on the opening kickoff and relied on their run game from the start, as halfback Malaki Sheppard punched the ball into the endzone from 16 yards away to get the Bulldogs on the board. Sheppard also pushed across the two-point try and Burch took the 8-0 lead with 5:32 left in the first.

On the first Matewan drive, fullback Jesse Smith drove them into Burch territory with a nice run up the middle. The Bulldog defense made a stand however as Dalton Thomas and Alex Muncy combined to sack Matewan quarterback Deuce Prater on fourth down as the ’Dogs took over on downs.

Burch continued moving the ball up the field with ease via the run game and this time quarterback Dane Hatfield called his own number and ran it in from 20 yards away. Sheppard once again punched in the two-point try and the Bulldogs led 16-0 with 6:19 to go in the first half.

The Tigers had a chance to get on the board heading into the halftime locker rooms as they were inside the Burch 10-yard line with less than 15 seconds to go but they were out of timeouts.

That came back to bite coach Jacob Staton’s club, as Prater attempted to scramble out to the right but was tackled in bounds by Hatfield on the outside and time ran out in the first half with the score remaining 16-0.

Matewan got the ball to start the second half and again looked to trim the Burch lead to one possession, but Muncy made his second big play of the game on defense as he picked off a Prater pass and returned it to the Tiger 40-yard line.

The Bulldogs wasted no time on their ensuing drive as Hatfield broke free on the first play and found the endzone for the 40-yard score. The two-point try was no good, but coach Tony Davis’s took the 22-0 lead with 5:25 left to go in the third.

The Tiger faithful in attendance finally had something positive to cheer about on their next drive as Prater found streaking Dylan Vance open on a seam route and he raced 80-yards for the Matewan score. The two-point pass was no good, but the Tigers trimmed the lead back to two possessions at 22-6 with 1:54 left in the third.

With the clock in Burch’s favor, they stuck with their steady run game and continued chewing up the clock, eating up nearly eight minutes of game time before Nathan Hynd ran it in from three yards away. The two-point try was no good, but the Bulldogs took the 28-6 lead with only 2:39 to play.

Sheppard picked off a pass in the secondary for Burch in the final minutes to help seal the three-peat and bring the hardware back to Delbarton.

Burch was led on the ground by Hatfield as the 8th grader ran 11 times for 139 yards and two scores. While Sheppard added 15 carries for 110 more yards, a touchdown, and a pair of two-point conversions.

Prater finished 4-7 passing for 109 yards, a touchdown, and two interceptions for the Tigers as they struggled to get into an offensive rhythm. Prater also added 45 yards on the ground while Smith added 30 yards on six carries. Vance had the one scoring catch for 80 yards while Chris Ross caught two passes for 24 yards.

The championship for the Bulldogs was not only the third straight title but also the 5th in the past seven seasons. Coach Davis was assisted this season by Michael Sheppard and Zach Curry. They also finished with an undefeated 9-0 record for the third consecutive season.