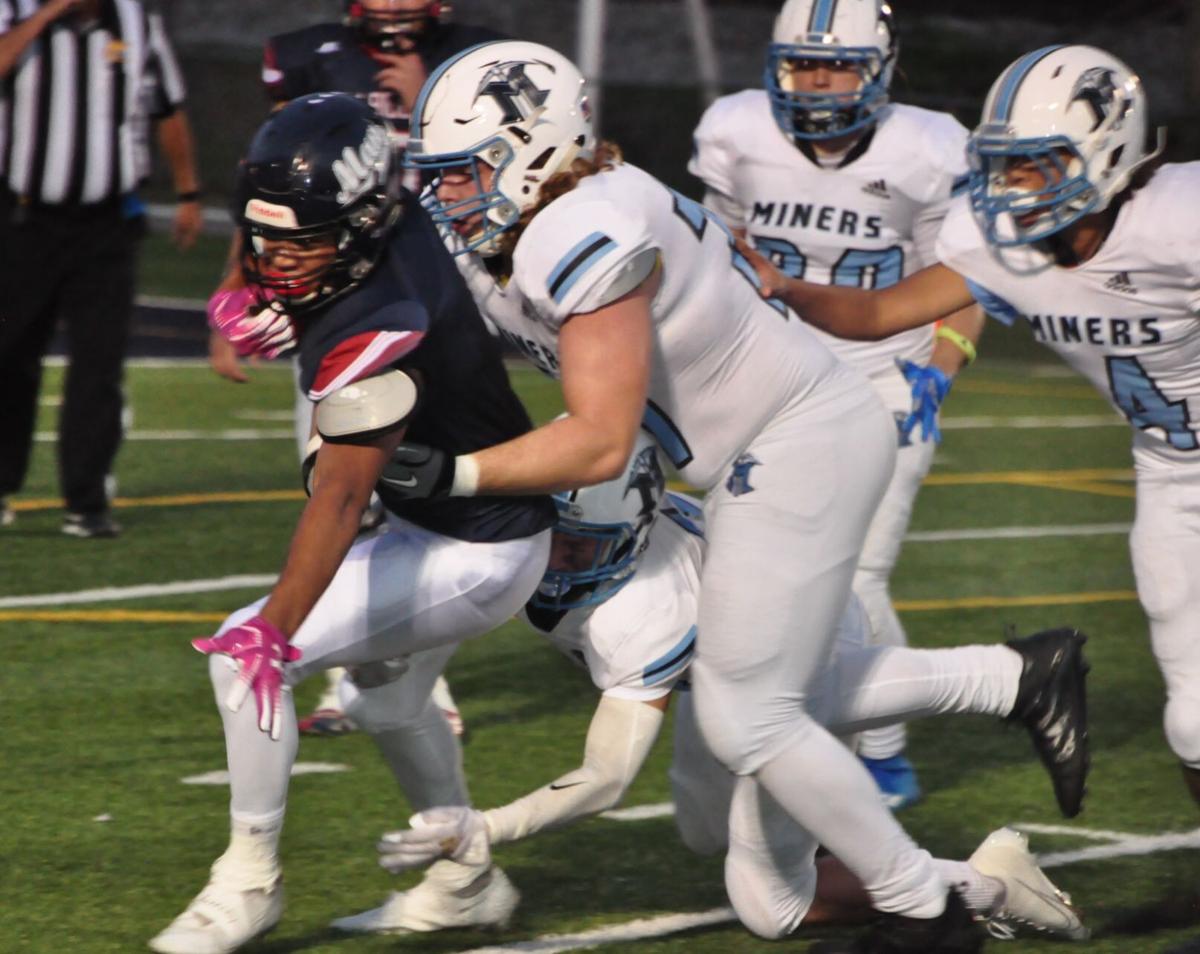 Man High School running back Justin Grimmett is tackled in the Hillbillies’ 7-6 win over Mingo Central on Friday, Sept. 17, 2021 at Man. 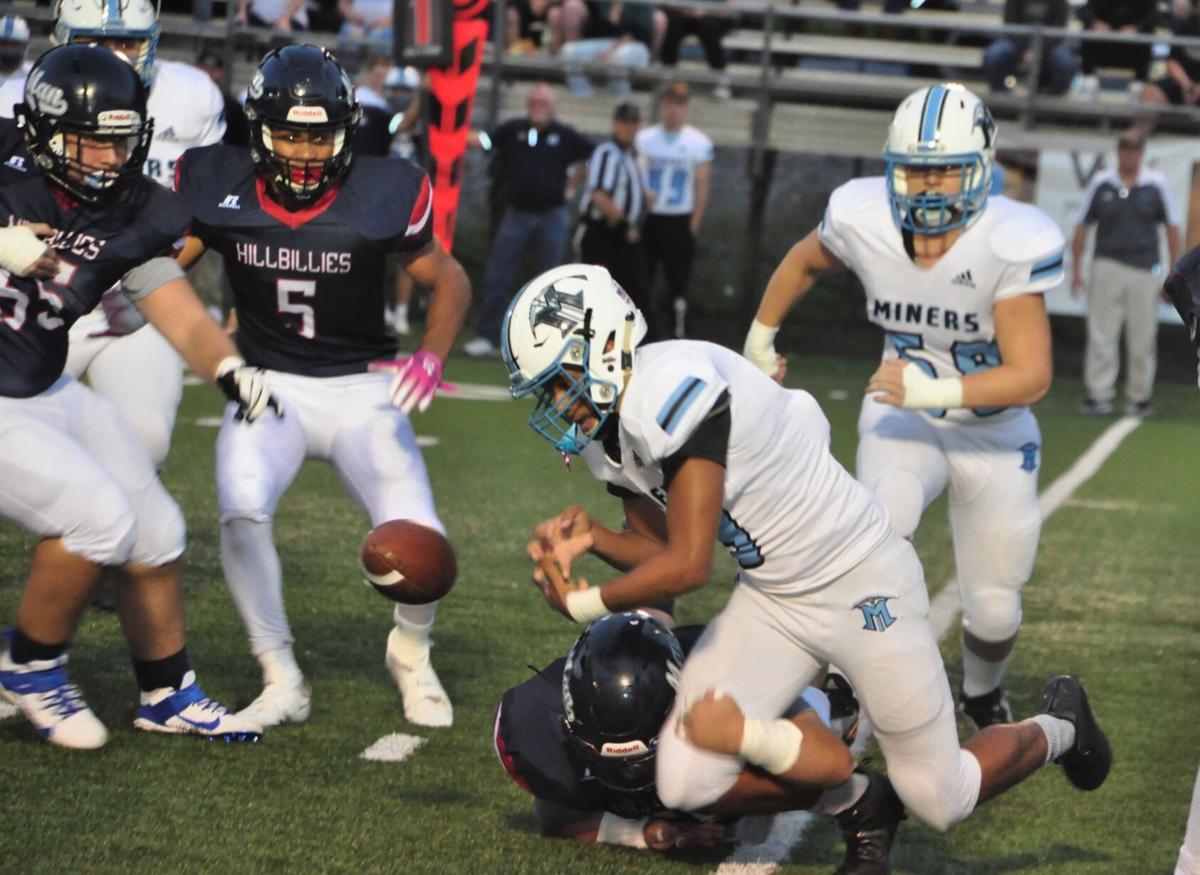 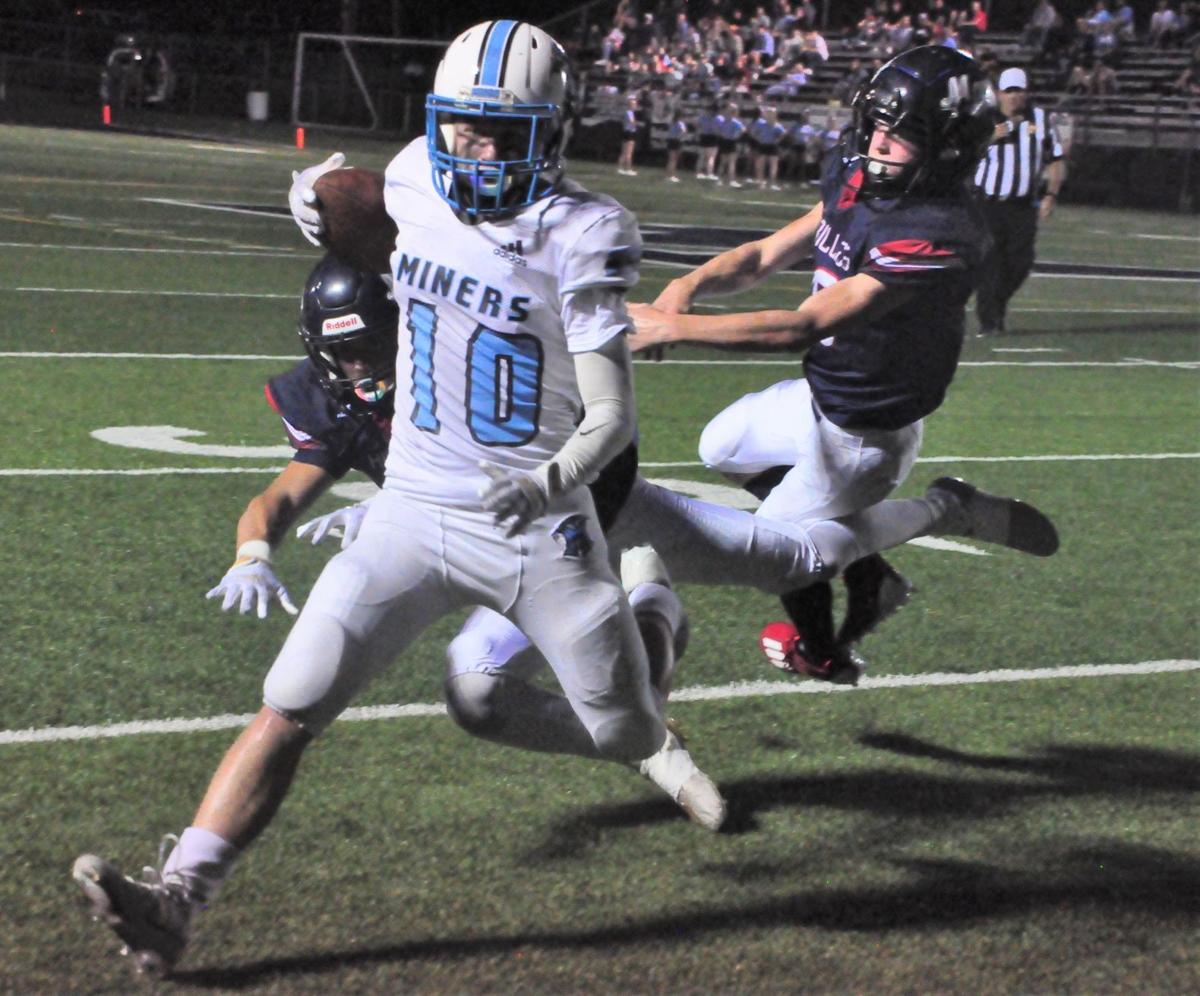 Mingo Central’s JR Perry (10) runs with the ball after making a catch. 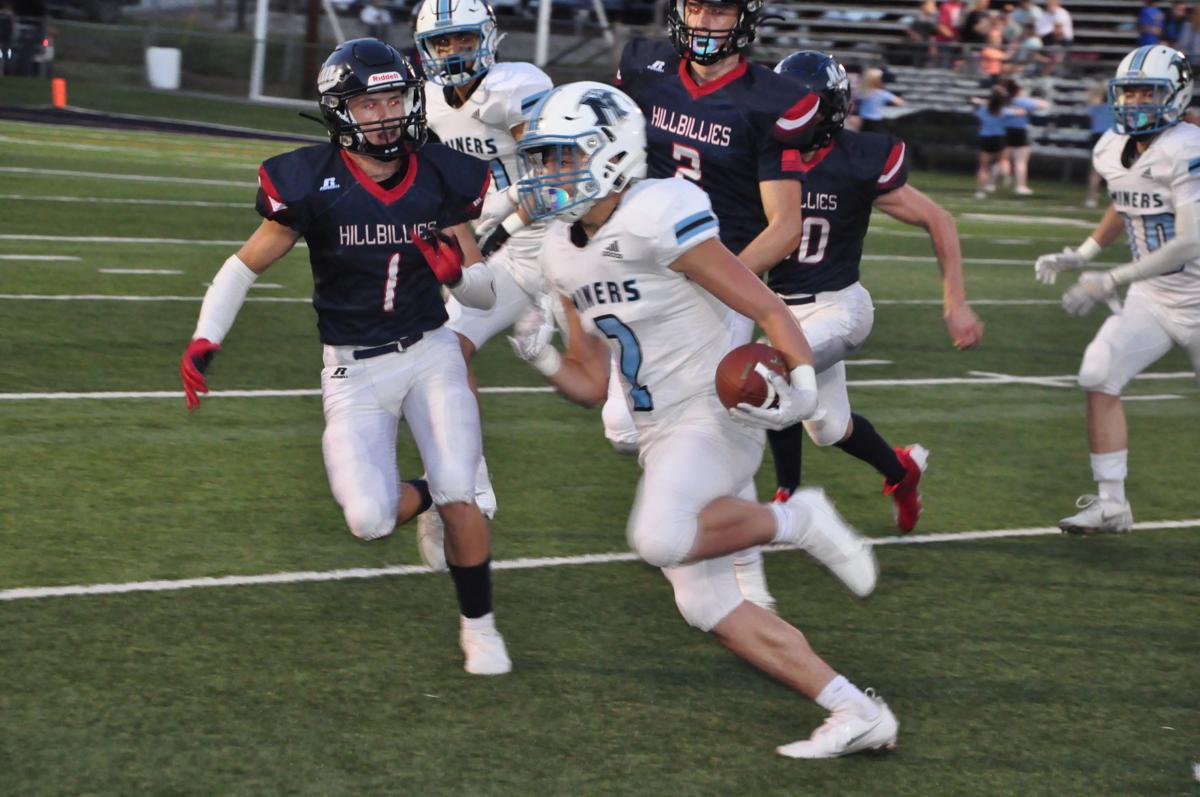 Mingo Central’s Norman Kennedy runs with the ball in Friday’s loss at Man. 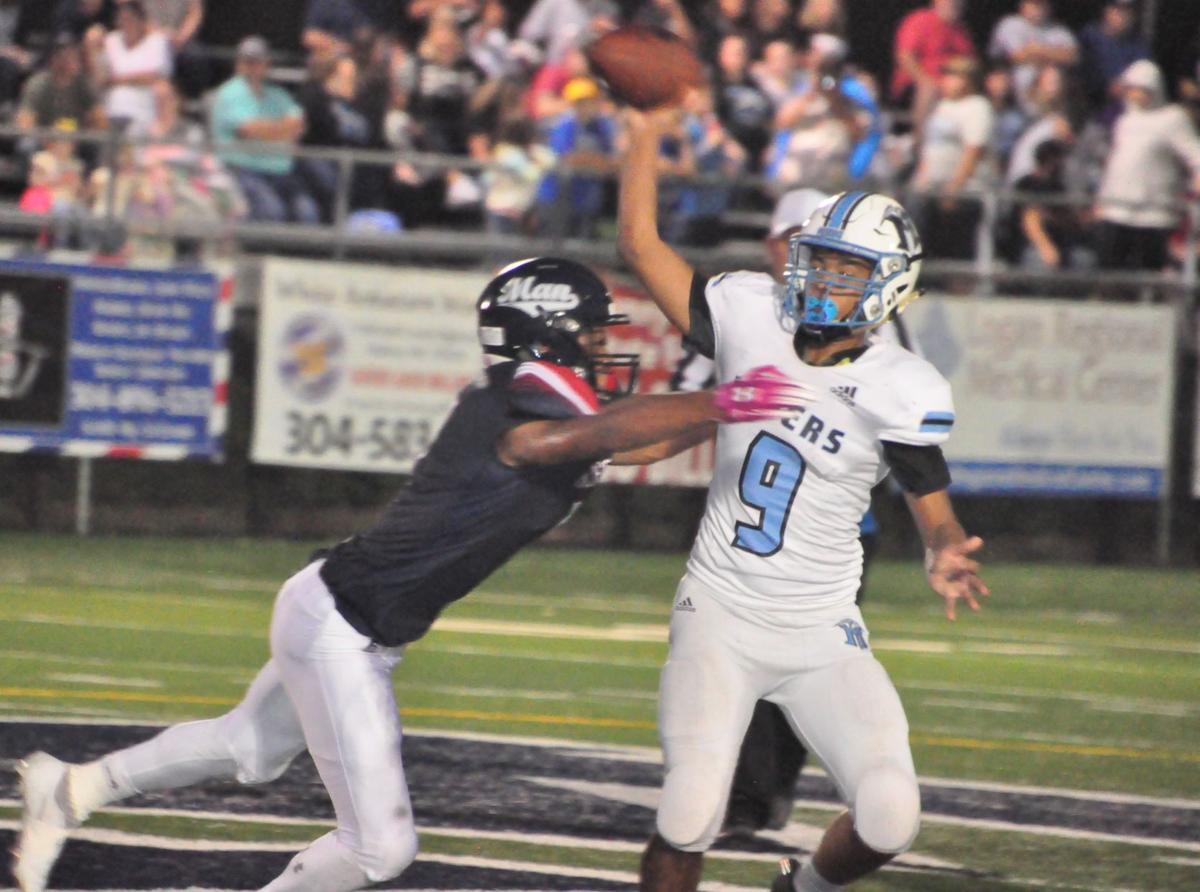 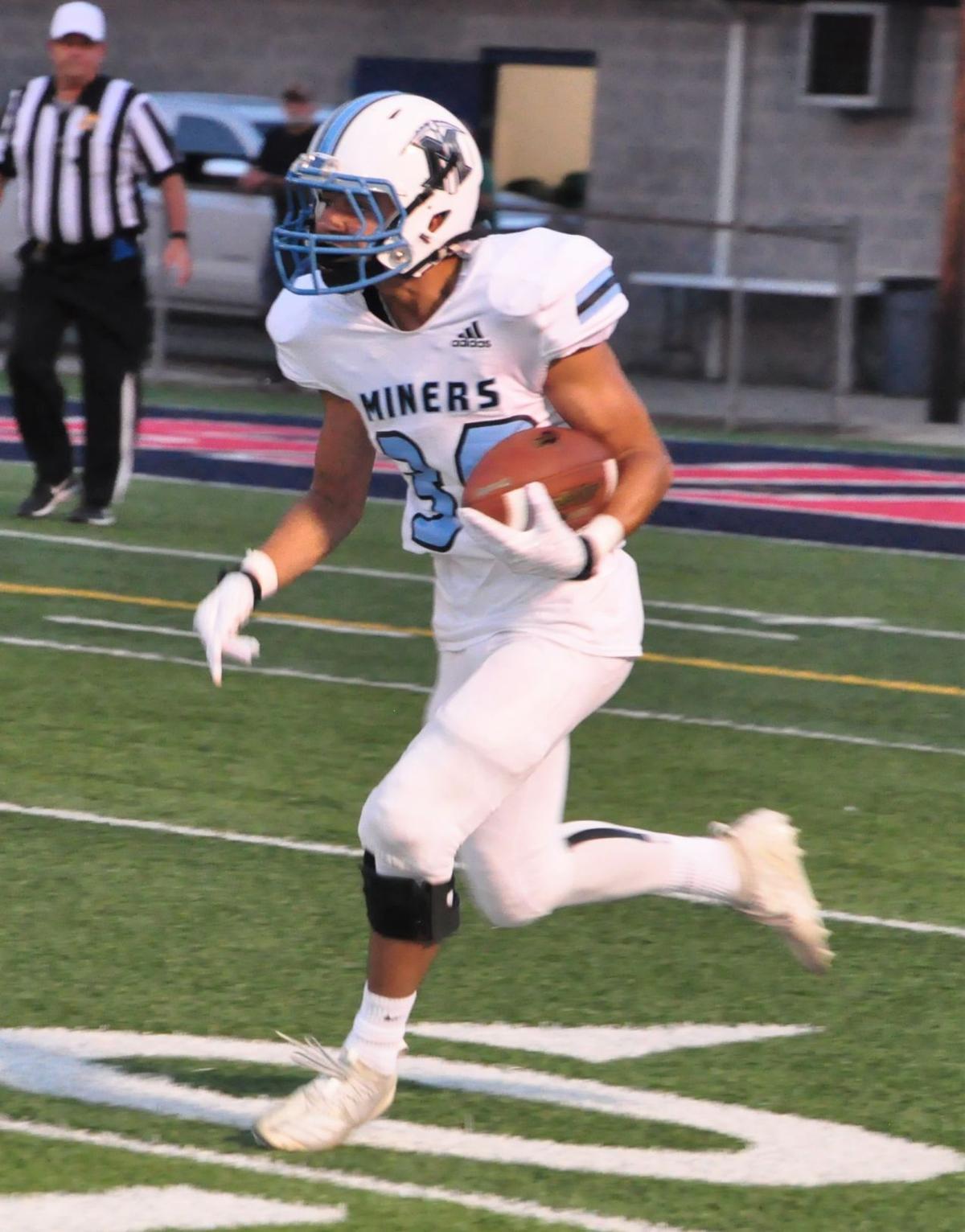 Mingo Central’s Kaedon Bolding returns a kickoff in the Miners’ 7-6 loss at Man on Friday.

Man High School running back Justin Grimmett is tackled in the Hillbillies’ 7-6 win over Mingo Central on Friday, Sept. 17, 2021 at Man.

Mingo Central’s JR Perry (10) runs with the ball after making a catch.

Mingo Central’s Norman Kennedy runs with the ball in Friday’s loss at Man.

Mingo Central’s Kaedon Bolding returns a kickoff in the Miners’ 7-6 loss at Man on Friday.

MAN — As the nail-biter of a Man/Mingo Central game progressed into the deep recesses of the fourth quarter it became very apparent.

The knife-edge game might come down to a single score.

It certainly was all that as the Man High School football team defeated Class AA No. 16 Mingo Central in a 7-6 thriller on Friday night at Man’s George A. Queen Memorial Field.

The Single-A Hillbillies (2-1) won the game in dramatic fashion.

After a Mingo Central fumble, recovered by Braxton Mills — one of six turnovers by the Miners on the night — Man took over at the MCHS 42-yard line with 7:45 left in the game.

Nine plays later, Harless would fire a 35-yard touchdown pass to Justin Grimmett with 3:42 left in the game. Jaxson Tipton then broke the deadlock by booting the extra point, giving Man a 7-6 lead.

The PAT ended up being the difference.

The Miners (1-2) got the ball back but could not move it.

Facing a fourth-and-26 play on its own 23, Man’s Jayden Brumfield then secured the win by intercepting a deep, tipped pass from Miners’ QB Chris Ross down at the Billies’ 40-yard line with 1:35 left.

Man then ran three plays and moved the sticks and later, QB Israel Canterbury took a knee to secure the win.

It was a pivotal victory for the Billies, which beat their second straight Class AA team and raised their record above the psychological .500 mark.

It was also the first of three games for Man over a brutal span of eight days, which takes the Billies to Mount View on Tuesday and Wheeling Central on Friday, Sept. 24.

“It was a great win, absolutely,” said an elated Man coach Harvey Arms. “We played all night to win a ballgame. We had trouble moving the ball on offense but we did when we had to.”

Arms said he brought in Harless late in the game to try to shake things up.

Harless, a starting wide receiver who played some at quarterback for the Billies last season, was able to complete three passes and run on four keepers covering 37 yards.

It was the spark Man needed.

“We weren’t moving the ball,” Arms said. “We thought we were open a few times but we weren’t getting the completions so we decided to try something else. Maybe we could get somebody open and we could catch one, so we moved Jeremiah in at quarterback and moved Justin Grimmett to the end from the backfield and it worked for us.”

Mingo Central had success moving the ball most of the night behind senior running back Norman Kennedy but the Billies played a bend-but-not-break defense and came up with several big stops on third and fourth down conversions.

“Our defense did a heck of a job and we forced a lot of turnovers,” Arms said. “We were a bend-but-not-break defense but from my part we were bending too much. They came up with some big plays. We bent, bent and bent but we were able to pull it out at the end.”

The game was scoreless nearly through three quarters.

The Miners were able to break the tie on the last play of the third period as Ross scored on a 1-yard keeper. The two-point conversion pass failed, however, leaving the score at 6-0.

The failure ended up costing the Miners.

Earlier in the third quarter, Mingo Central also missed an opportunity to score as Preston Smith dropped a tipped pass in the end zone on a fourth-and-10 play at the Man 16-yard line.

Mingo Central first-year coach Chase Moore said it was a tough defeat for his young team.

“We had six turnovers and four in the first half,” Moore said. “This loss is 100 percent on me. We didn’t have our guys ready for this moment. I didn’t have them ready in the second half in this dog fight. Hats off to the Man football team and Coach Harvey Arms. There’s a reason they are successful. He’s been doing this for 40 years.”

The Miners just could not seem to make the big plays when they needed it, Moore said.

“We just could not capitalize on the opportunities that we had. We shot ourselves in the foot,” he said. “Man made big plays too.”

The drop in the end zone was also huge.

“From my angle it looked like it was tipped and Man got some hands on it,” Moore said. “It was just one of those nights. Preston Smith is the kind of guy that if we had that play nine more times he catches all of them. It was unfortunate but again, I have to have our guys more ready and prepared. It’s nice to sit back and look at the future but we have to play for the present. We have some things that we can build on.”

Harless not only helped orchestrate the winning drive he also intercepted Ross twice in the first half, both coming on the Miners’ opening two drives of the game.

The first pick was in the red zone at the Man 16-yard line.

Early in the second quarter, the Miners threatened again, driving to the Man 21-yard line.

However, on a fourth-and-16 pass at the Man 27, the Billies’ Jordan Adams intercepted Ross in the end zone for a touchback.

Man’s offense sputtered in the first half and never really threatened to score.

Late in the second quarter, yet another Miners’ drive stalled as the Mingo Central turned the ball over on downs at the Man 29-yard stripe.

Man’s Jerry Tabor would fall on a Miners’ fumble on the last play of the scoreless first half.

Man improved to 3-1 over Mingo Central in the brief all-time series and beat the Miners for the second year in a row. Last year, the Billies won 28-24 over Mingo on the road atop Miner Mountain.

Arms said beating another Double-A team is big for his team in the playoff point system.

“This is good. Two Double-As in a row,” he said. “They (Mingo Central) will give us a bonus point. It’s good for us.”

Mingo Central is scheduled to return to action next Friday night at home against the Poca Dots, a former Cardinal Conference rival. Kickoff is set for 7 p.m.