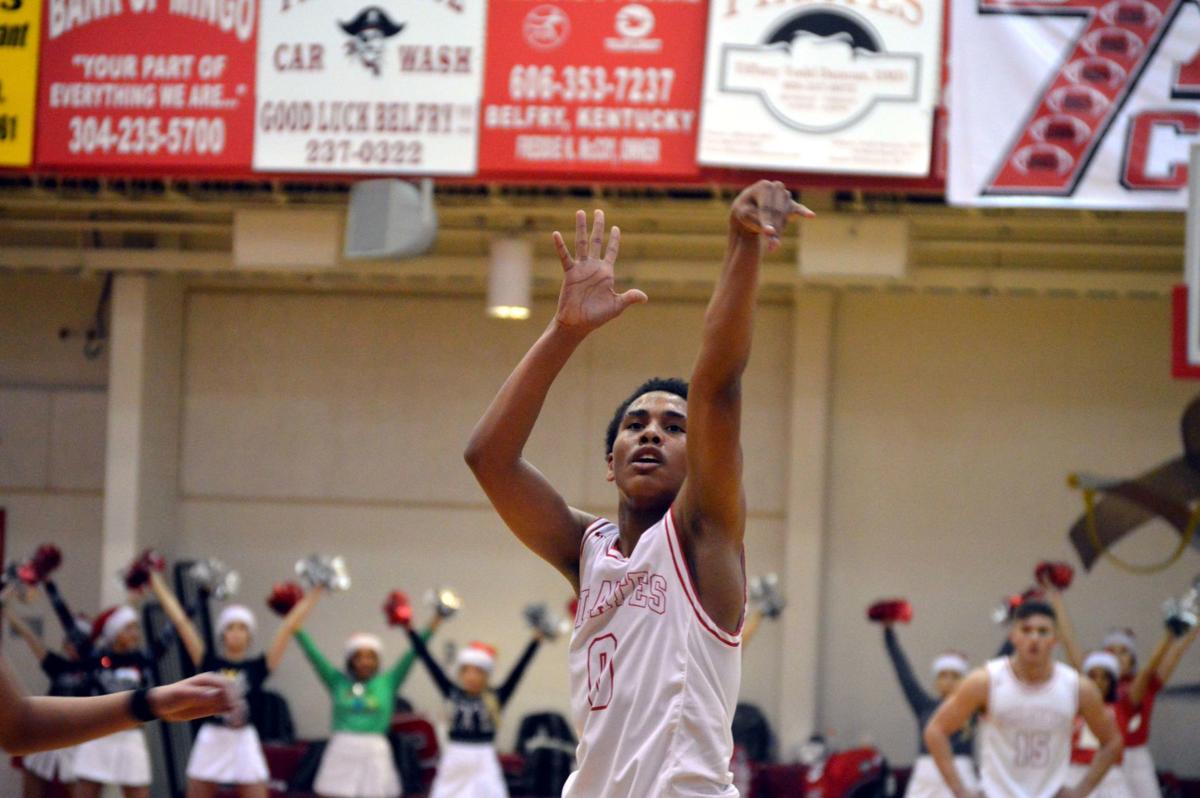 Belfry freshman point guard Sal Dean follows through on a free throw attempt in an early season game at the BHS Gymnasium. He finished 15 of 16 from the line against Perry County in the 76-71 win on Friday. 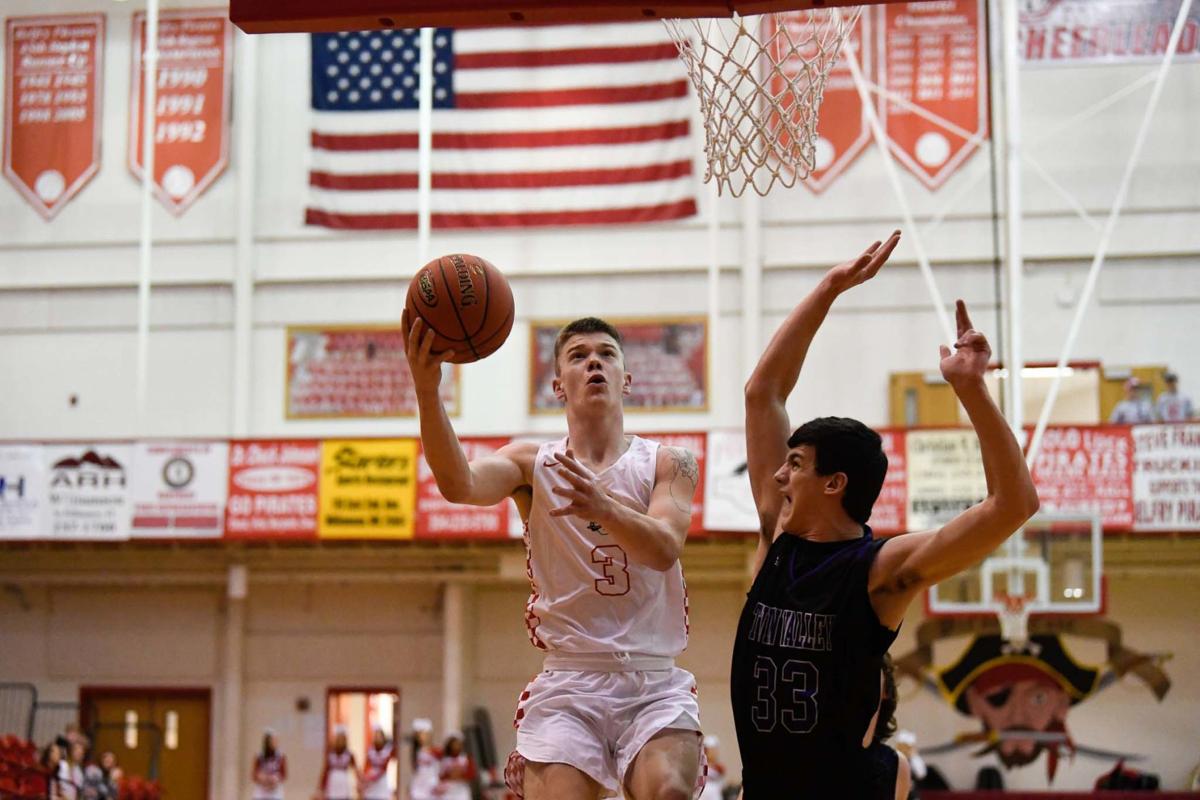 Belfry junior Brett Coleman skies to the basket for two points in the Pirates’ 70-34 win over Twin Valley on Saturday in the 45th annual Mountain Schoolboy Classic at the BHS gymnasium. 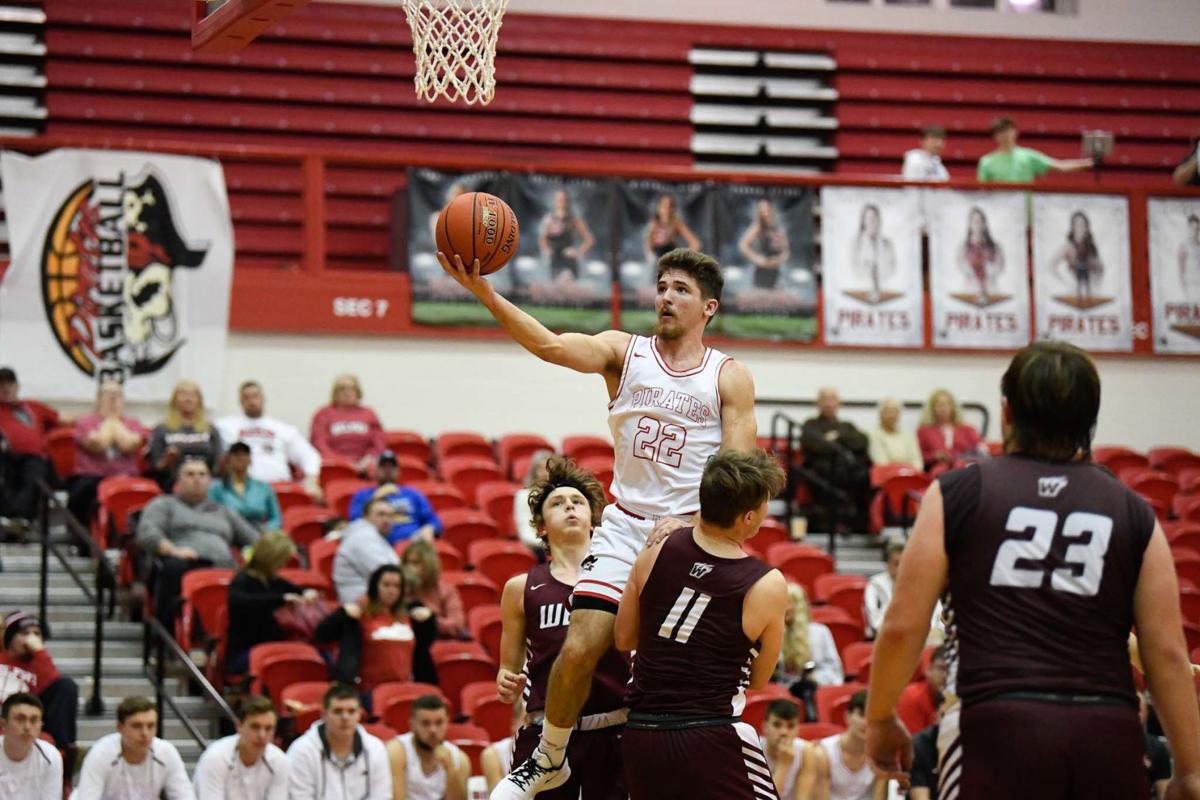 Belfry junior Isaac Dixon finishes through contact in the Pirates’ 66-57 loss to West Carter in the final night of the 45th annual Mountain Schoolboy Classic on Sunday.

Belfry freshman point guard Sal Dean follows through on a free throw attempt in an early season game at the BHS Gymnasium. He finished 15 of 16 from the line against Perry County in the 76-71 win on Friday.

Belfry junior Brett Coleman skies to the basket for two points in the Pirates’ 70-34 win over Twin Valley on Saturday in the 45th annual Mountain Schoolboy Classic at the BHS gymnasium.

Belfry junior Isaac Dixon finishes through contact in the Pirates’ 66-57 loss to West Carter in the final night of the 45th annual Mountain Schoolboy Classic on Sunday.

GOODY, Ky. — The Belfry Pirates pulled off a thrilling comeback in the opening night of the 45th annual Mountain Schoolboy Classic on Friday, Dec. 27, as they defeated Perry County by a final score of 76-71 in the BHS Gymnasium.

The Pirates got off to a quick start early in the game as they jumped ahead to a 12-4 lead after six points by junior Brett Coleman, but Perry County stormed back to cut the lead to just one at 18-17 going into the second quarter.

The visiting Commodores caught fire in the second quarter as they rode the hot hand of Dylan Brock and Cameron Fugate to put up 27 points in the stanza and take a 44-38 halftime lead.

The third quarter saw neither squad find a groove as coach Mark Thompson’s squad only put up nine points in the period but was able to trim the Commodore lead by one at 52-47 going into the fourth.

The final eight minutes of the game is where things got wacky. Perry County started off the quarter looking to put the game away as they went on a 14-6 run and took a 66-53 lead with just over five minutes to play.

Coach Thompson’s Pirates never quit however and continued to chip away at the lead until a pair of free throws by Coleman tied the game up at 69 all with a minute and a half to play.

After Belfry forced a Perry county turnover on the defensive end, freshman point guard Sal Dean drew a foul driving to the basket on the other end with less than 50 seconds to play.

Dean, who finished 15-16 at the line on the night, calmly sank both free throws to give the Pirates the 71-69 lead. The lead was their first since the start of the second quarter.

The Pirates forced another stop on the defensive end the next time down and was able to ice the game away at the line down the stretch to pick up the six-point come from behind victory.

Belfry was led in scoring by the freshman Dean as he finished with 19 points while also yanking down seven rebounds. Coleman and senior Jax Thompson joined him in double-figures with 13 points each while Coleman also yanked seven rebounds and dished a team high four assists.

Junior shooting guard Austin Hager was the fourth Pirate to reach double-figures as he totaled 10 points while junior Isaac Dixon added nine off the bench, including eight in the second quarter.

BELFRY 70 TWIN VALLEY 34 (Saturday): The Belfry Pirates picked up their second win in as many days on night two of the 45th annual Mountain Schoolboy Classic as they routed visiting Twin Valley out of Virginia by a final score of 70-34.

The Pirates started out hot as they forced several early turnovers against Twin Valley which led to some easy buckets, as they built a 19-6 lead after one quarter of play.

That lead swelled going into the second stanza as the Belfry fired in 17 points in the frame as they went 7-7 from the charity stripe and took a 36-16 lead into the halftime locker rooms.

Coach Mark Thompson’s club kept their foot on the gas coming out of the break as they took a 52-28 lead into the fourth, and they ran away with it in the final eight minutes outscoring the Panthers 18-6 to pick up the 36 point win.

Belfry had a balanced attack netting 12 points each from Austin Hager and Brett Coleman while freshman guard Sal Dean tallied 11. The Pirates netted 10 players in total in the scoring column.

Belfry hit 5 3’s and shot 11-12 from the charity stripe while the Panthers only connected on three 3s and were 7-15 from the foul line.

WEST CARTER 66 BELFRY 57 (Sunday): The Belfry Pirates fell just short of going 3-0 in the 45th annual Mountain Schoolboy Classic on Sunday night as their comeback against West Carter fell just short and they lost by a final score of 66-57.

Both teams started off sluggish in the last game of the three-day event as the score read 10-9 after one quarter of play, with the Comets leading by one.

In the second quarter, the visitors caught fire and ripped the nets for an 18-point quarter while holding the Pirates to only nine once again and grabbing a 28-18 lead going into the break.

Coach Mark Thompson’s club got hot in the third quarter as they put up 20 points led by 3s from Tyler Chaffin, Austin Hager, and Isaac Dixon but still trailed West Carter by nine at 46-37 going into the fourth.

Belfry continued to battle back in the final eight minutes and cut the lead to four at 59-55 with less than two minutes to play, but never got any closer as the Comets held on for the win

Sal Dean led the Pirates in scoring as he dropped 13 points and junior Austin Hager followed him with 12 coming on four long balls. Junior forward Brett Coleman also reached double-figures as he scored 11.

The Pirates struggled from the line only hitting 7-17 attempts while West Cater hit 20-31.

With the two wins over the weekend Belfry sees their season record move to 6-3 as they head into the New Year. They get six days off and are back in action on Saturday in the Kentucky AA Championship Sectional Tournament against Lawrence County.

Both the boys and girls AA Sectional Tournament will be played at Belfry High School this year. The Lady Pirates are scheduled to play LCHS at 6:30 p.m., while the boys’ teams will follow with tip scheduled for approximately 8:15 p.m.