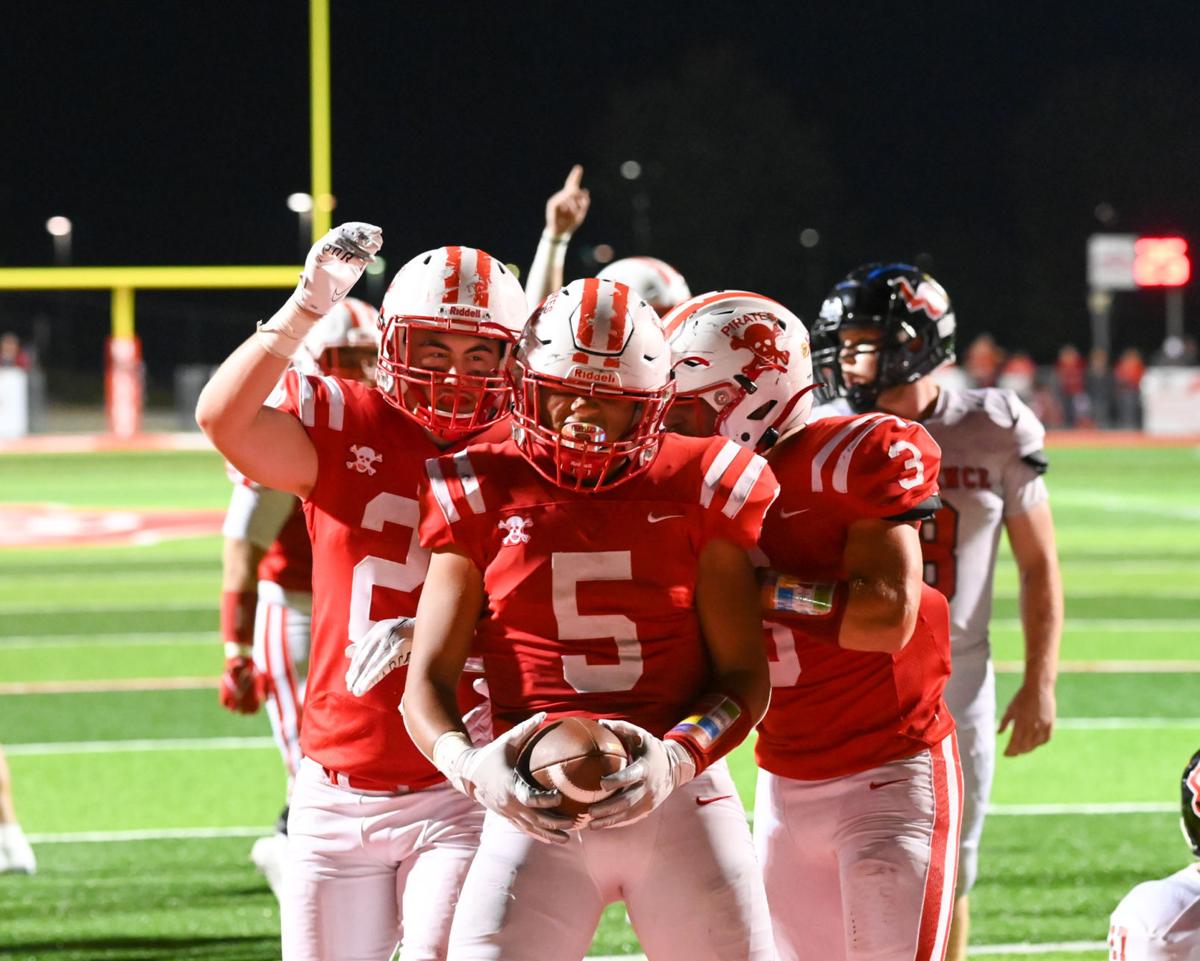 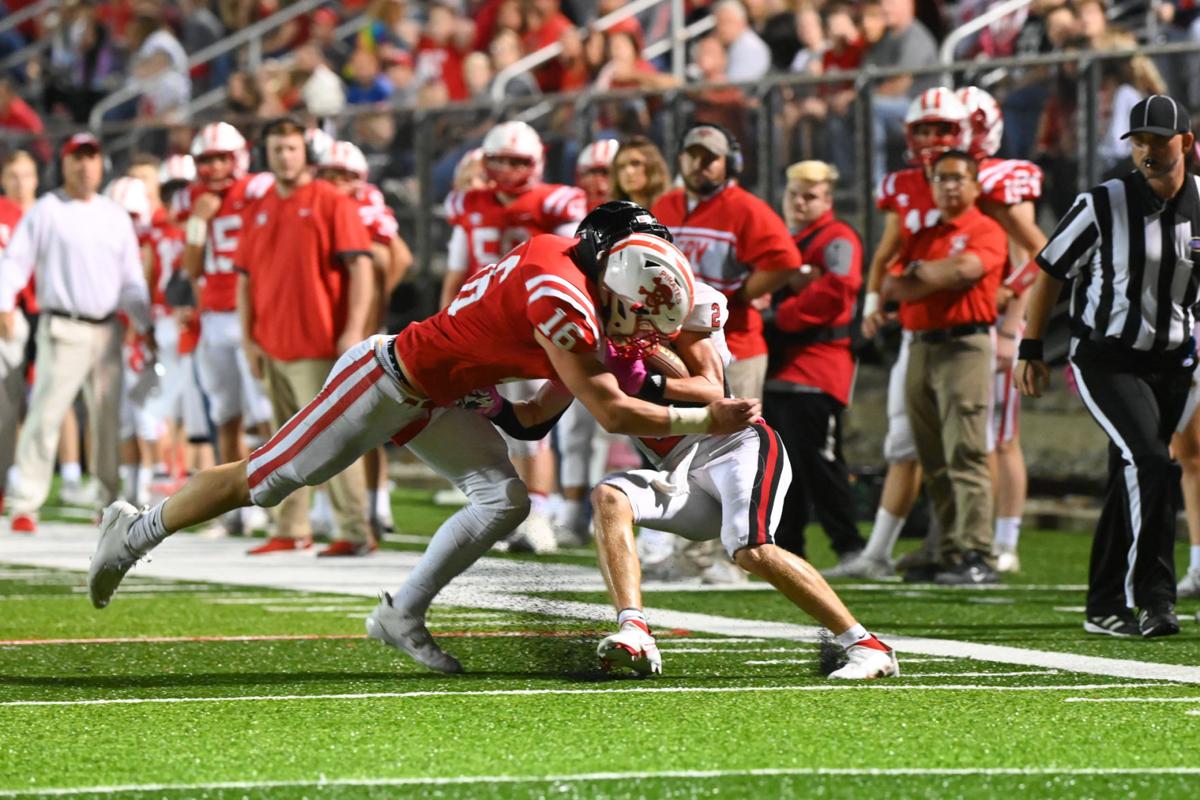 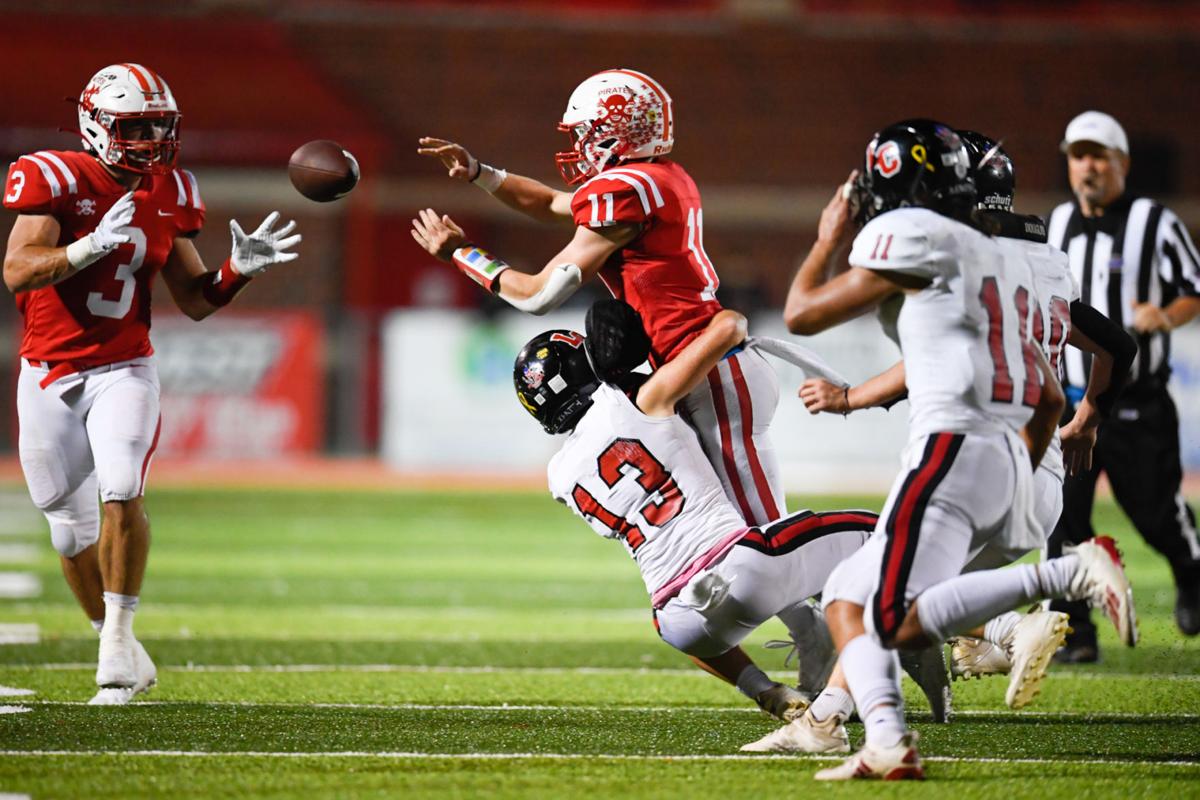 Belfry QB Caden Woolum is hit as he makes a pitch to Isaac Dixon during the Pirates 42-13 win over Lawrence County on Friday at Haywood Stadium.

Belfry QB Caden Woolum is hit as he makes a pitch to Isaac Dixon during the Pirates 42-13 win over Lawrence County on Friday at Haywood Stadium.

GOODY, Ky. —The Belfry Pirates proved that they are still among the top dogs in Class 3A as they dominated district foe Lawrence County on Friday night at Haywood Field and came away with the 42-13 win.

The Bulldogs came into the contest unbeaten on the playing field as they boasted a 6-1 record with their only loss on their record coming due to COVID-19 protocols.

The Pirates had no trouble beating Lawrence County however as the 29 point victory was the 22nd straight for Belfry over the Bulldogs dating back to 2002.

After the visiting Bulldogs got on the board following a one yard run from Dylan Ferguson first to take a 7-0 lead, the Pirates got their vaunted running game going on their first drive of the game which was capped off by a one yard keeper from QB Caden Woolum as Belfry tied the game up at 7 all with 6:48 in the first.

After the Belfry defense forced a punt on their next possession, coach Philip Haywood’s club mounted another scoring drive this time needing only three plays to reach the endzone on a two yard run from Neal Copley. Ireson’s PAT was good and the Pirates took the 14-7 lead with 3:32 left in the first.

Lawrence County mounted another scoring drive on their next possession as they went 65 yards in 11 plays and brought the score to 14-13 after another 1 yard run from Ferguson with 7:52 left in the first half.

The Pirates then mounted a long clock-chewing drive of their own as they went 66 yards on 13 plays and senior Isaac Dixon scored his first touchdown of the game on a 10 yard sprint. Ireson’s PAT was good and Belfry took the 21-13 lead with 1:51 left in the first half.

Rather than just run the first half clock out and take the game into halftime down just one score, Lawrence County coach Alan Short tried to move the ball down the field with his passing game but was unsuccessful and had to punt the football back to the Pirates.

That proved to be a major mistake as Belfry took over at their own 49 with 40 second remaining and were in the endzone two plays later thanks to the legs of Dixon. His 7 yard run with 25 seconds to play and Ireson’s ensuing PAT gave Belfry the 28-13 halftime lead.

The second half was all Belfry as the Big red defense forced a fumble, picked off a pass, forced two punts, and forced a turnover on downs as LCHS failed to put anymore points on the board.

The Pirates added two scores in the second half both coming from sophomore fullback Dre Young as the red-and-white cruised to the 29 point win.

The Belfry running attack gained 348 yards on the night on 40 carries while they limited Lawrence County to 139 yards rushing on 35 carries.

The Pirates limited Bulldog QB Alex Strickland to 11-21 passing for 142 yards and one interception as Dixon picked off a pass in the second half.

The win for Belfry is their third straight since they entered the district portion of their schedule as they improve their record to 3-5 on the season.

The Pirates will play their final district game of the regular season this Friday night as they will make the short trip up U.S. 119 and play 3-6 Pike Central.

Belfry has dominated this series since they first played in 1994 as they are unbeaten at 30-0 against the Hawks. Kickoff for the 31st meeting between the Pike County foes is scheduled for 7:30 p.m. at the Hawks Nest.