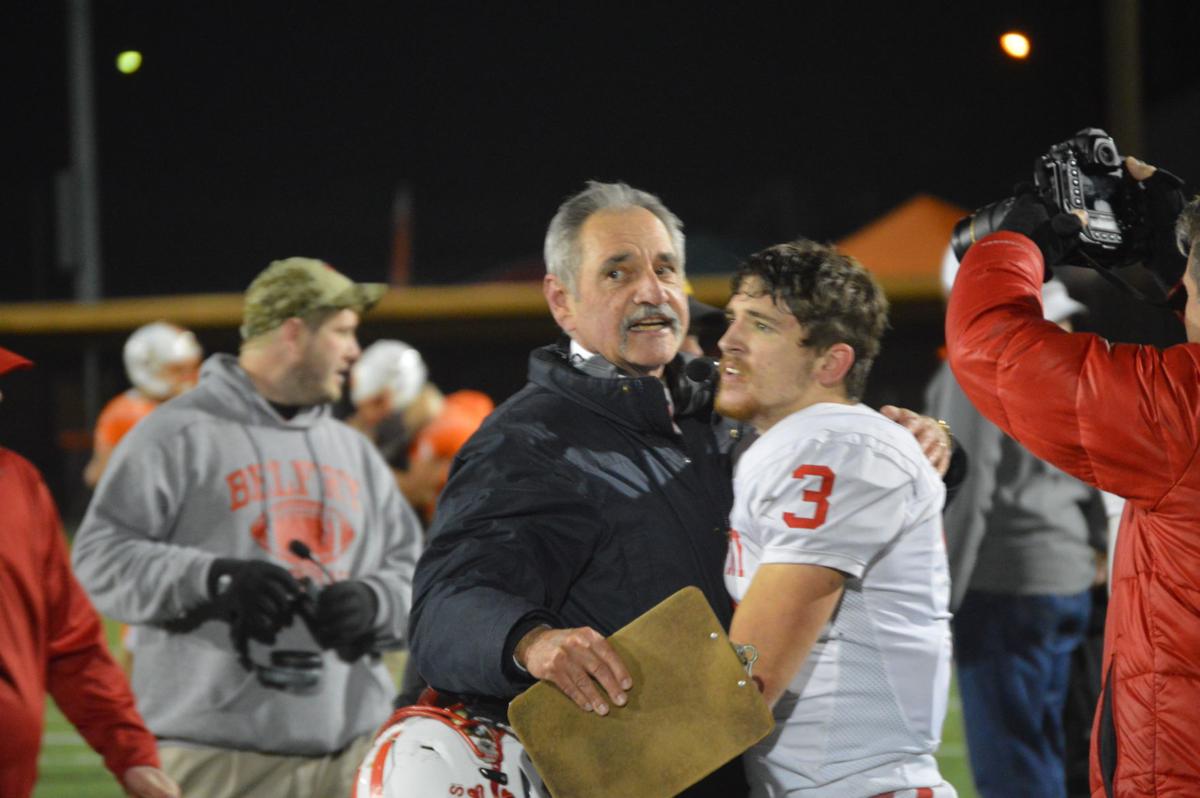 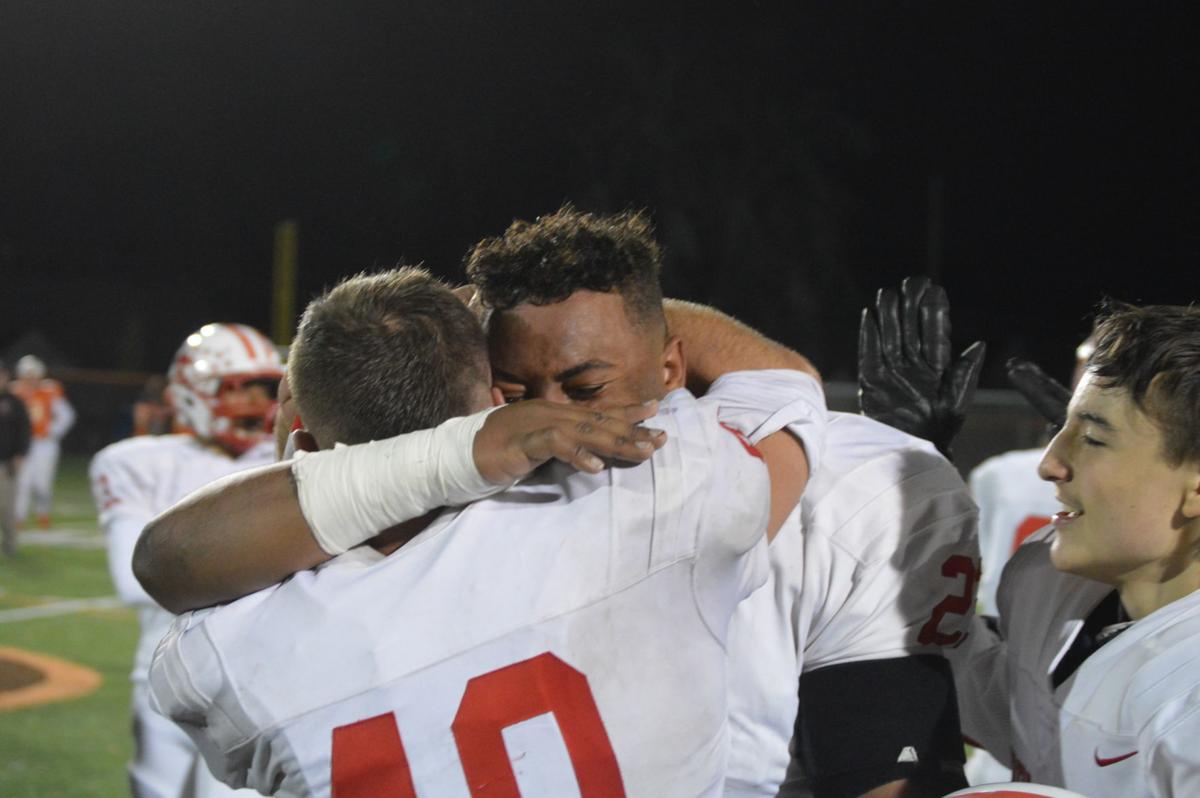 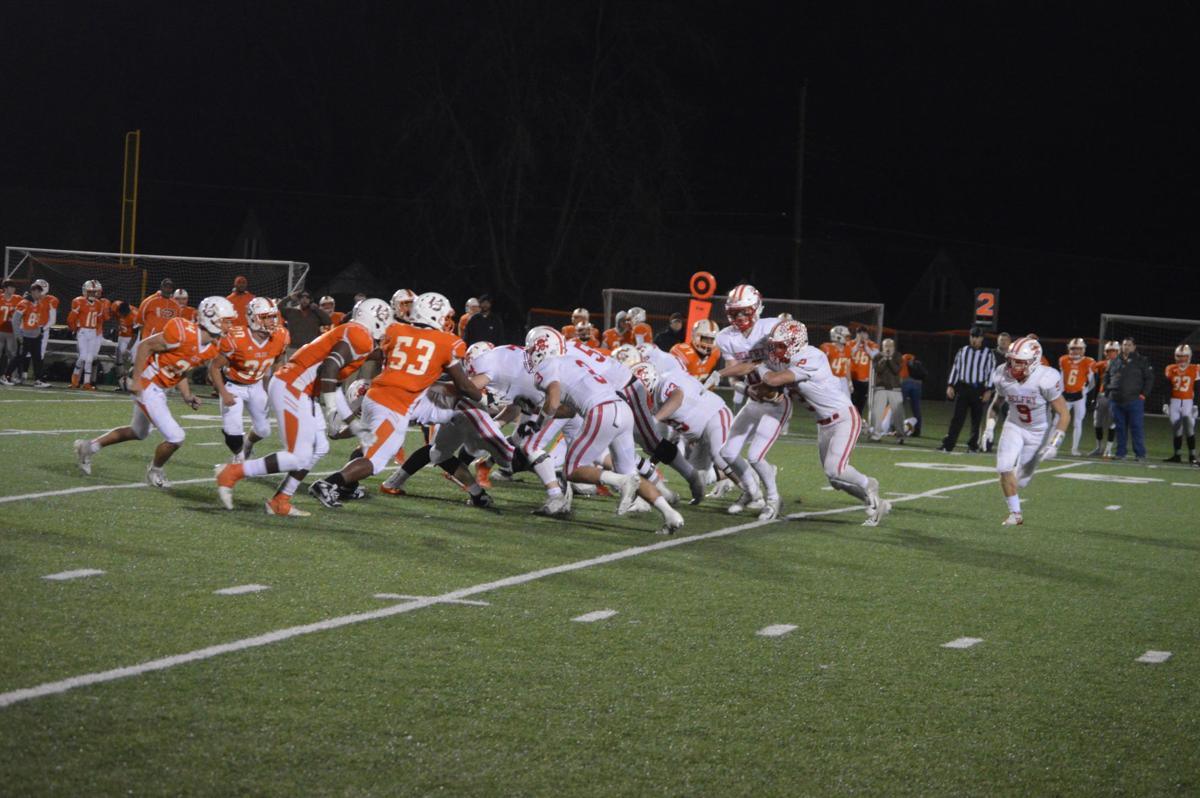 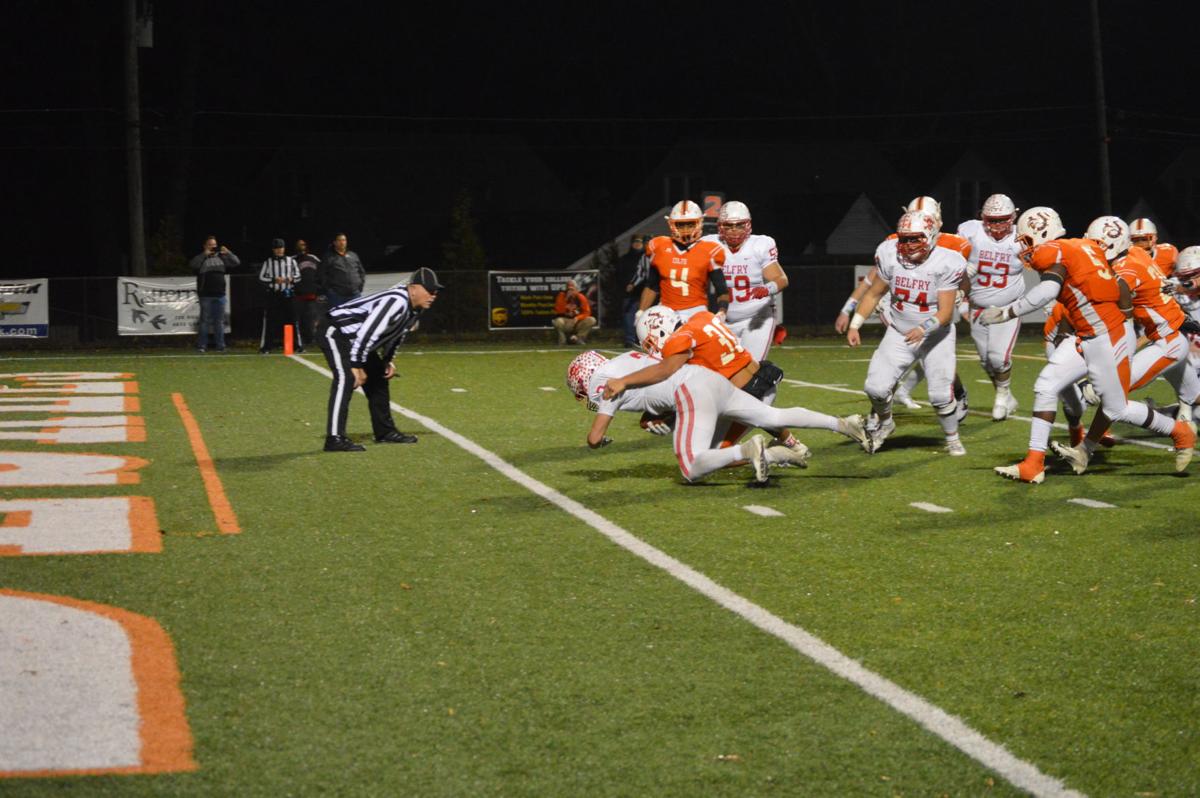 Belfry senior fullback Peyton Hensley plows through a tackle and lunges for the endzone in the Pirates’ thrilling 15-14 double OT win over DeSales in the KHSAA Class AAA State Semifinals on Friday at Paul B. Cox. Stadium in Louisville, Ky.

Belfry senior fullback Peyton Hensley plows through a tackle and lunges for the endzone in the Pirates’ thrilling 15-14 double OT win over DeSales in the KHSAA Class AAA State Semifinals on Friday at Paul B. Cox. Stadium in Louisville, Ky.

LOUISVILLE, Ky. — What was expected to be a rugged, defensive battle between Belfry and DeSales in the UK Orthopaedics/KHSAA Commonwealth Bowl Class AAA Semifinals lived up to the hype on Friday night as the two teams combined for zero points through the first four quarters of play as the game went into overtime tied at zero apiece.

It was the Pirates however who secured a spot in the Class AAA State Championship game at Kroger Field as they picked up a 15-14 win over the Colts in a double overtime thriller at Paul B. Cox Stadium.

“I’m so proud of our kids and so proud of our coaches,” 45-year head coach Philip Haywood said following the win. “We knew it was going to be a battle, we knew these guys were really good defensively and we weren’t just going to rip and roar with our offense. We did kind of what our game plan was, just be patient and do what we do.

“I thought toward the end of the second quarter we found two or three things that started working and we told the guys at halftime ‘just take a breath offense and relax a little bit, you are trying a little too hard, and defense just keep playing your pants off.’ I’m just really proud of our kids and our coaches for keeping their composure. We always talk about playing 48 minutes or longer, however long it takes. And tonight, well it took a while.”

After neither team could put points on the board in regulation after a dazzling display of defense by both teams, DeSales won the coin toss and elected to go on defense in the first overtime. High school football overtime is like that of college football as both teams get a chance to score, but in high school football the ball is placed at the 10-yard line.

Belfry (10-3) took the ball wasted little time finding the endzone for the first score of the game as senior fullback Peyton Hensley powered in on the second play from seven yards away. Senior Grayson Cook’s extra point was good, and the Pirates took the 7-0 lead.

The homestanding Colts (11-3) answered quickly however as running back James Johnson took it in on the first play from 10-yards away and Bake Givens extra point split the uprights to tie the game at seven apiece and the game went into a second overtime.

The Pirates then trailed for the first time in the game after a one yard run by QB Demarcus Avery on 3rd down and a Givens extra point gave the Colts a 14-7 lead and were a play away from seeing their season end as they faced a fourth and goal from the one, but a tough run by senior fullback Peyton Hensley kept the game alive for Belfry and trimmed the DeSales lead to 14-13.

Following the score, the Pirates lined up to kick the important point after to tie the game but DeSales head coach Harold Davis called a timeout to ice the Belfry kicker. Coming out of the timeout, coach Haywood pulled his kicking team off the field and elected to bring his offense back out to go for two and try and win the game.

The gutsy call payed off as quarterback Brett Coleman ran the option to the right and pitched it to junior running back Isaac Dixon who sprinted inside the corner of the pylon and the red-and-white celebration ensued as the Pirates picked up the thrilling one-point walk-off win.

“I asked our defensive coaches a question, I said ‘guys can we stop them?’ And they said, ‘coach we don’t know if we can or not.’ And I said, ‘well let’s go win it,” Haywood said of the final decision to go for two. “The guys were already wanting to do it anyway. Sometimes it’s the right thing to do, if you’ve got a chance to win and you can’t stop somebody you better take that opportunity. We had the right play; we knew what to run. So, it was very fortuitous for us to go for two.”

Hensley was a work horse all night long for Belfry churning out tough yards between the tackles as he totaled 111 yards on 26 carries and the two important touchdown runs in the overtime periods. He said his team came together late in the game and willed themselves to the victory.

“It was all about going out playing hard and finishing,” Hensley said after the win. “We came out a little slow but we battled the whole game. Once it got to overtime we just had to really come together as a team and we did tonight.”

It was evident from the opening kick that the game was going to be a battle between the two stout defenses as neither offense could muster much at all offensively in the first half and each committed a turnover.

The Colts held the Belfry rushing attack to only 65 yards in the opening half while the “Big Red” defense held DeSales to 114 yards on 26 plays and were boosted by an interception by senior Isaiah Birchfield of quarterback Demarcus Avery in the endzone.

The struggles offensively continued in the second half for both squads as neither could find a groove. The Pirates made a crucial mistake late in the third period as a fumble in Colt territory was recovered by senior Dejuan Watkins at the Belfry 37-yard line.

The “Big Red” defense made a stand however and got the ball back as they forced a fumble by Johnson, and it was recovered by Coleman and the Pirates took back over at their own 28-yard line with 11:14 to play in the game.

Neither team threatened to score the remainder of regulation as defensive back Ben Bentley picked off a long pass by Avery at the BHS 29-yard line with only 19 seconds to go to set up the decisive overtime periods.

“We knew they had great weapons on their offense coming in. Our big goal was to keep them in front of us, take away the big play,” coach Haywood said. “Make them work for it, we thought that they would make some mistakes. Unfortunately, we made a couple of mistakes on offense too. But our defense was outstanding “

The game was standing room only as they attendance swelled past the 3,000-seat capacity at Paul B. Cox Stadium as Pond Creek Nation made the trek down the Mountain Parkway and up Interstates 64 and 65 and showed up in groves to support their beloved Pirates.

Coach Haywood said that the fans are a huge part of the team’s success and that the players feed off their energy.

“What a crowd, people come from all over the place. I am just thrilled about the passion that people have for Belfry football. This kind of crowd on a Friday night on Thanksgiving weekend, is just incredible. They are a big part of what we do. This was just a huge win for our team, school, and entire community.”

With the win the Pirates improved to 10-3 on the season and secured their 14th state championship game appearance in school history. They are 6-7 all-time in state title games.

The win was also career win No. 448 and playoff win No. 92 for the legendary coach Haywood, both of which are first al-time in high school football in the state of Kentucky. He is 6-6 in state title games, leading the Pirates to four straight Class AAA titles from 2013-2016.

Belfry will matchup against fellow mountain school Bell County in the Class AAA title game after they defeated Taylor County 46-28 on Friday night to improve to 14-0 and advance to their first state championship game since 2009.

Kickoff for the KHSAA Commonwealth Bowl Class 3A State Championship game is scheduled for Friday, Dec. 6, at 7 p.m. on the turf at Kroger Field, home of the Kentucky Wildcats.