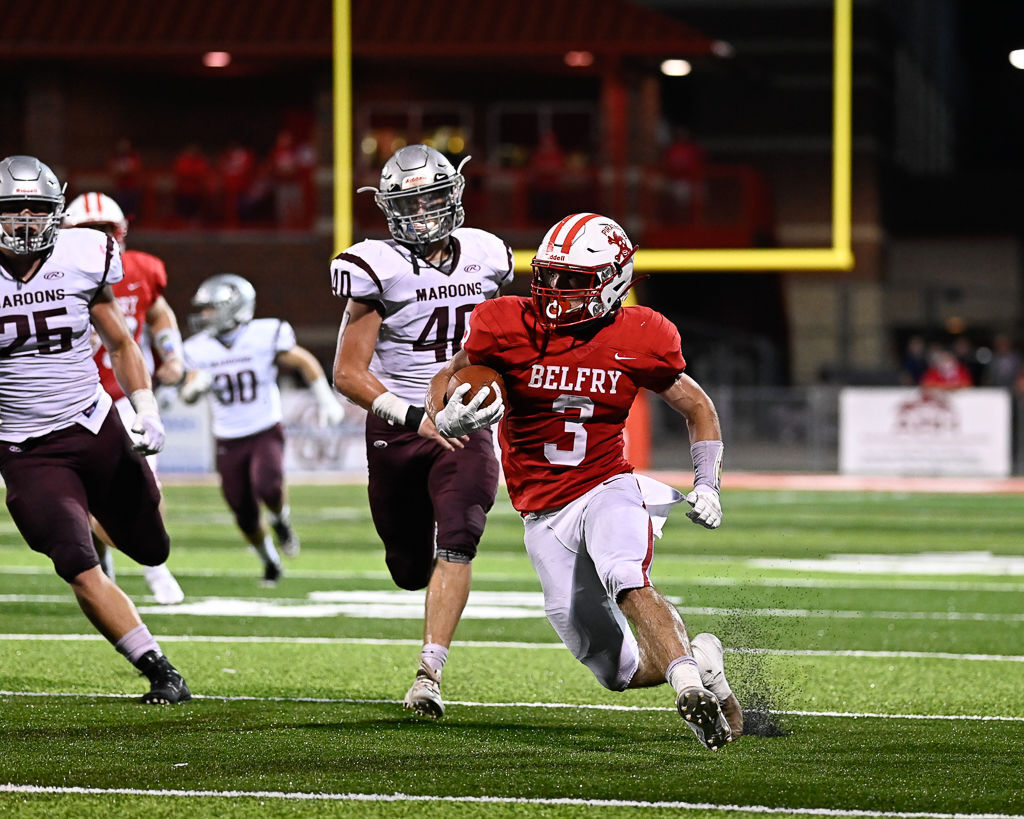 Belfry star running back Isaac Dixon speeds past defenders during the Pirates 33-13 win over Pulaski County on Friday, Sept. 11 at Haywood Stadium. 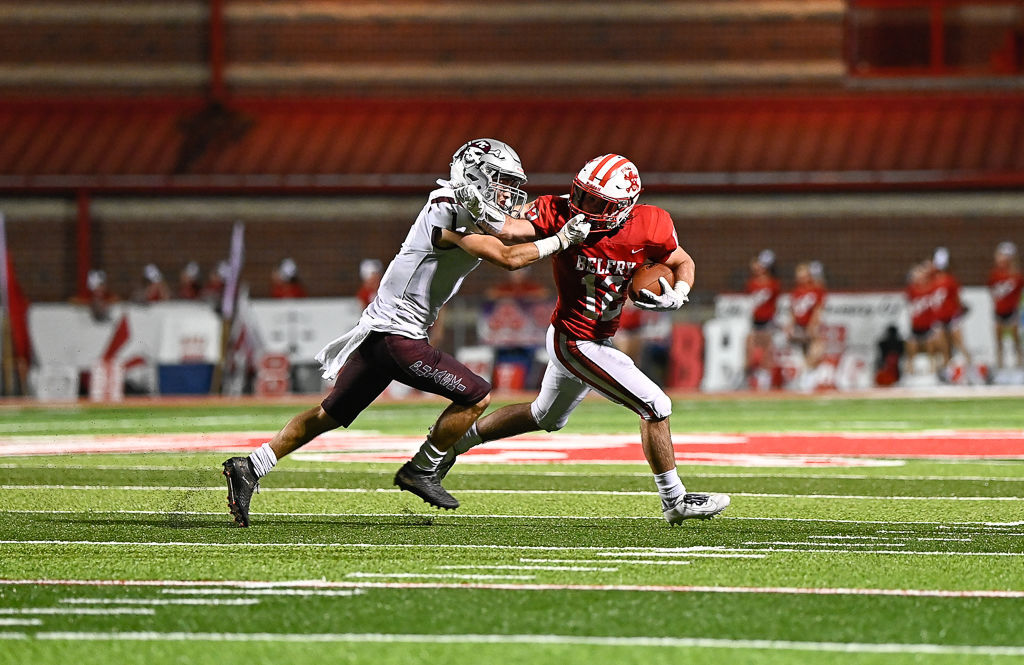 Ray Justice Photography Belfry running back Brayden Rash is brought down by his face mask in the Pirates 33-13 win over Pulaski County on Friday, Sept. 11 at Haywood Stadium. 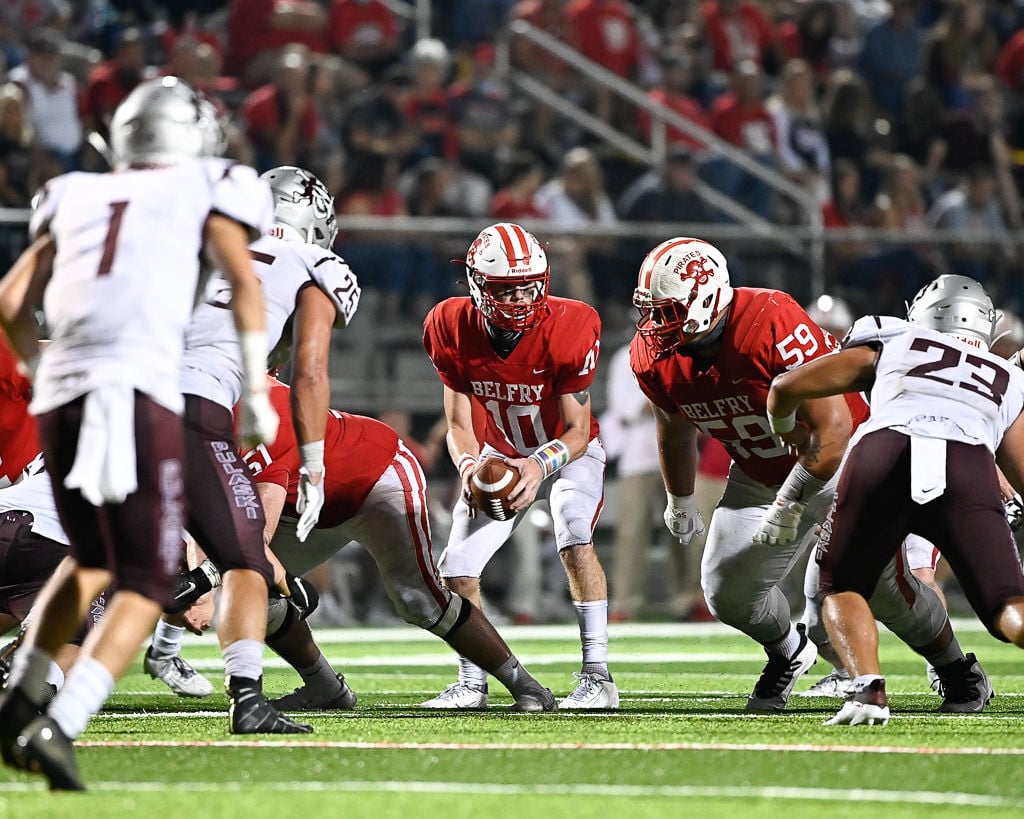 Belfry quarterback Brett Coleman takes a snap in the Pirates 33-13 win over Pulaski County on Friday, Sept. 11 at Haywood Stadium.

Belfry star running back Isaac Dixon speeds past defenders during the Pirates 33-13 win over Pulaski County on Friday, Sept. 11 at Haywood Stadium.

Ray Justice Photography Belfry running back Brayden Rash is brought down by his face mask in the Pirates 33-13 win over Pulaski County on Friday, Sept. 11 at Haywood Stadium.

Belfry quarterback Brett Coleman takes a snap in the Pirates 33-13 win over Pulaski County on Friday, Sept. 11 at Haywood Stadium.

GOODY, KY — The Belfry Pirates picked up a 33-13 win over visiting Class 5A Pulaski County in their season opening game on Friday night at Haywood Stadium with an estimated 1,500 fans in attendance as legendary head coach Philip Haywood picked up career win No. 450.

“We’re glad for the win here tonight, I thought our kids played hard and that was all we asked them to do,” coach Haywood said after the win. “Just play hard and do the best you can do and it will all work out for us and it did...but I’m extremely happy that our kids are getting to play, it’s a great night for high school football.”

The defending Class 3A state champion Pirates (1-0) picked up right where they left off at the end of the 2019 season as they drove down the field on their opening drive and put points on the board.

Talented senior running back Isaac Dixon found paydirt first for BHS as he scampered in from 17-yards out with 5:49 on the clock in the first period and after the PAT was no good the Pirates took the 6-0 lead.

Dixon, who was named MVP in the State Championship game last season, dominated the Maroons on the ground as he ran the ball 14 times for 194 total yards and two touchdowns in the contest.

After the Belfry defense forced a quick three-and-out, the Pirates mounted a long 12-play, 81-yard drive that was capped off by a 3-yard run up the middle from senior fullback Kyle Webb. The PAT was once again no good and BHS led 12-0 with 11:18 left in the first half.

The Maroons (0-1) got on the board on their next possession as QB Drew Polston found Chandler on a nice 13-yard scoring strike in the corner of the end zone. The PAT split the uprights and the score was trimmed to 12-7 with 9:42 left in the half.

BHS wasted no time getting those points back however as after six plays senior QB Brett Coleman powered across the endzone on a 1-yard sneak to give Belfry the 18-7 lead with 7:00 left on the clock. The PAT try hit the upright and the Pirates held onto the 11-point lead.

On the next Pulaski County possession, the Pirate defense stood strong once again and forced a turnover on downs to give their offense the ball back with a chance to put points on the board before the break.

It looked as if Dixon had his second score of the first half as coach Haywood went to the air and Coleman found Dixon as he made a nice leaping catch in the back of the end zone, but the official missed the call and called it incomplete.

Belfry had to then settle for a 28-yard field goal from junior Gideon Ireson with 29 seconds on the clock as they took the 21-7 halftime lead.

Coming out of the break Belfry took the ball first and quickly moved the ball down the field on four plays. They found paydirt on the fifth play of the drive as Webb scored for the second time, this time from 4-yards out.

Visiting Pulaski County answered back however as they then mounted an eight play, 64-yard drive which was capped off by a 7-yard run from running back Tristan Cox to trim the Belfry lead to 27-13 with 6:03 in the third.

Dixon blocked the PAT however to keep the Pirate lead at 14.

The speedster then wasted no time in getting those six points back as on the fourth play of the ensuing drive Dixon broke loose from 33-yards out and found the endzone with 10:51 to go.

Ireson’s PAT try was wide-left again as the score reached the final tally of 33-13.

The Pirates ran for 372 yards on the ground as a team compared to 12 yards passing, as the patented ground attack was firing on all cylinders.

Polston led the way on the ground for the Maroons as he ran 14 times for 87 yards, with the majority of those coming on scrambles out of the pocket.

Polston finished 21-32 passing for 163 yards and the one touchdown pass to Godby, who caught two passes for 27 yards.

The game was the first on the new field turf at Haywood Stadium which was just installed a week before the regular season.

With the win BHS improves to 1-0 and they have now won six consecutive games dating back to last season.

The Pirates are back in action this Friday night in a highly anticipated battle with the defending Class A State Champion Pikeville Panthers. The game is scheduled for a 7:30 p.m. kick at the Hambley Athletic Complex in Pikeville.